This coming bank holiday weekend, 8 to 10 May 2020, marks 75 years since the end of the Second World War in Europe. To commemorate this important anniversary the three day international festival ‘VE Day 75’ was planned. But due to the coronavirus and social distancing measures, all planned public VE Day 75 events are cancelled.

But even in lockdown, it’s still possible for us to have a shared moment to celebrate the end of the Second World War in Europe, and to commemorate the suffering endured by men and women in wartime across the world.

Read on for everything you need to know to help your family join in with the VE Day celebrations from home. I’ll explain what VE Day is, when it is, highlight the best heritage resources, and suggest ten ways your kids can join in the fun with a VE Day At Home party.

What is VE Day?

VE Day, or ‘Victory in Europe’ Day is the day that Allied victory in Europe was announced. Nazi Germany had surrendered the day before. VE Day was a day of celebration, a national holiday marked with cheering crowds, church services and street parties. But it was also a moment of reflection, for the lives lost, and for those still fighting in the Far East.

When is VE Day?

The key events to mark the 75th anniversary of VE Day are:

There are some brilliant resources to help you have a great VE Day 75 At Home party, or learn more about the history of VE Day. Here’s the best guides from British museums, heritage organisations, and the UK Government:

BBC Local Radio are encouraging people to make special VE Day 75 ‘Great British Bunting’ to display in your window at home. Download everything you need here. Using whatever you have at home, from cereal boxes to felt tips, ask your kids to decorate their bunting with whatever or whoever inspires them. You can share your displays on social media using the hashtags #GreatBritishBunting #VEDay75 and #BBCMakeaDifference.

If you want to make bunting for a cause, Bletchey Park need 1,945 metres of them to decorate their site with when they reopen. Download their #BuntingforBletchley template which gives guidance on how to make bunting from scrap fabric, which you can send to them after you’ve finished with it. There’s a no sew option for young kids too.

Psst: Stuck for time? Consider printing these colour bunting flags with the VE Day 75 logo, either with a Union Jack or white background. There’s also a few more suggested in the colouring in section, below.

2. Bake for an At Home Victory Tea Party

There are lots of ideas for sweet and savoury foods to serve at your Victory Tea Party, based on recipes from the time.

The celebration trifle from Bletchley Park’s VE Day Activity Pack is top of our list, as are the carrot scones from English Heritage’s VE Day Party Pack, and Winston Churchill’s favourite wartime fruit cake from the National Trust.

In terms of savoury snacks, you can’t beat a victory sausage roll (recipe included in Bletchley Park’s pack here) and a marmite and cheese swirl (from English Heritage’s pack here).

3. Make a tipple to toast victory

Join in with the Nation’s Toast with a homemade cocktail or soft drink. I fancy a Perfect Pimms or a 1940s Gin Cocktail (from Bletchley Park’s VE Day Activity Pack) whilst the Museum Kids would love to raise a homemade ginger beer or lemonade (both recipes in English Heritage’s VE Day Party Pack).

Join English Heritage on Facebook on Friday 8th May 2020 for a live Lindy Hop dance tutorial, a dance-along with a swing-time dance troupe and band and much more! It’s suitable for all ages and their live broadcasts are family-friendly. The day kicks off with a Lindy Hop Dance Tutorial with Nancy Hitzig at 12 midday, culminating in a Dance for VE Day with Lindy Hop Dance Troupe and Band at 5pm. Each part of the day will be saved on their Facebook page so you can watch again at a later time.

5. Join in the Sing-along

What’s a party without a playlist? English Heritage have created a Spotify playlist to sing along to, called Dance for VE Day. Bletchley Park have compiled classic wartime hits in VE Day 75 Celebrations whilst the DCMS have big band and jazz sounds in their VE Day Celebration playlist.

If you want to join in with a Sing-along, there’s lyrics to Lambeth Walk and White Cliffs of Dover in English Heritage’s VE Day Party Pack. Or prepare for the 9.15pm sing-along on Friday 8 May with the lyrics to We’ll Meet Again in Bletchley Park’s VE Day Activity Pack. 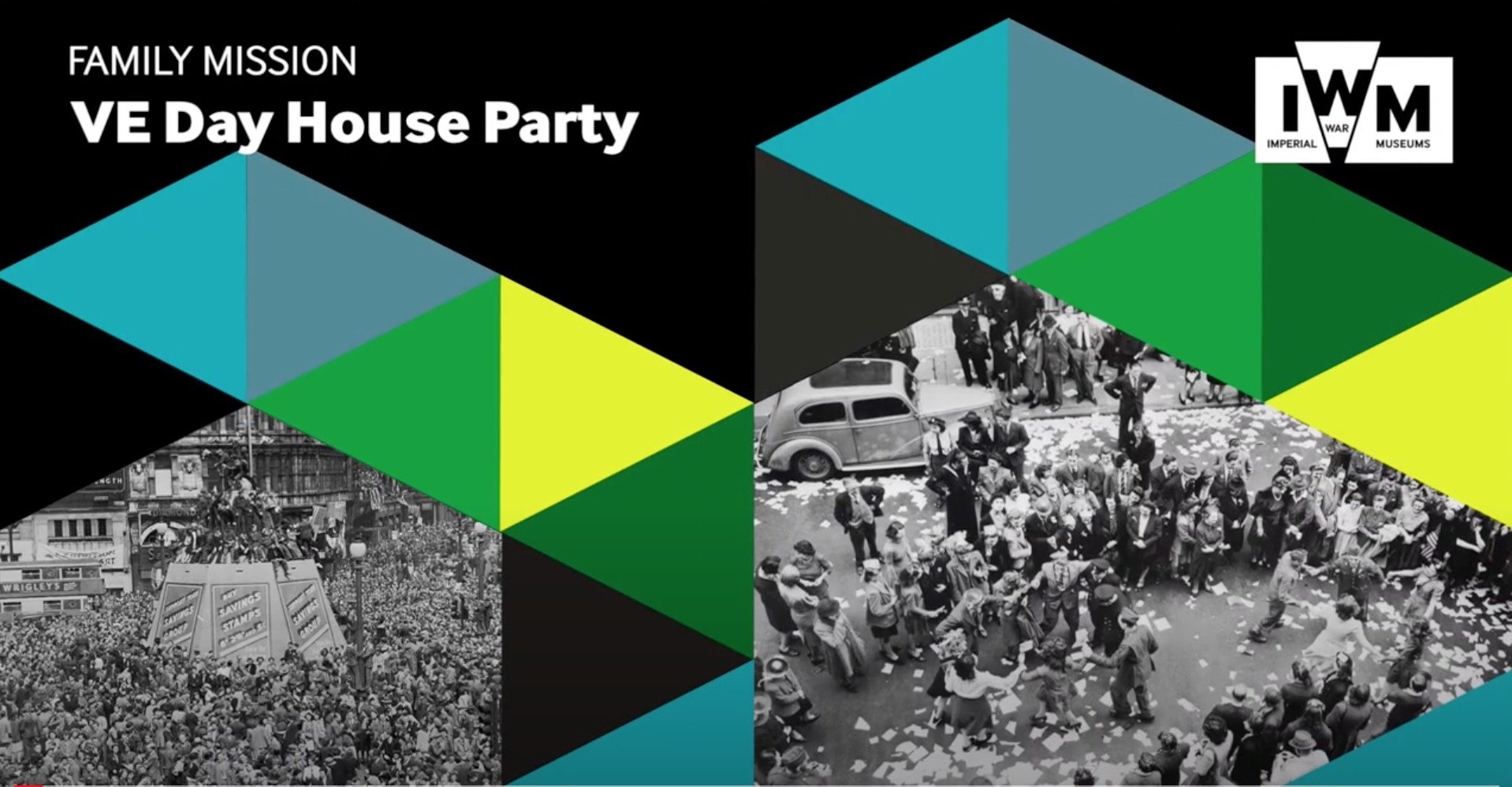 7. Listen to voices of the war

The Imperial War Museum invites everyone to listen to a four-minute soundscape featuring first-hand accounts of VE Day selected from their vast sound archive. It’s incredibly powerful hearing about history through the voices and words of people who lived through it.

8. Join in with the Virtual VE Day 75 Festival

The National Army Museum, the RAF Museum and the National Museum of the Royal Navy are hosting a three day Virtual VE Day 75 Festival from 7 to 9 May 2020. There’s 40s dancing, soldier’s stories, and a concert in your living room. Download the full programme here.

9. Code breaking and colouring in

Head over to Bletchley Park’s VE Day learning resources page for colouring in and an activity pack of code breaking puzzles. Made in Ashford have a great FREE VE Day 75th anniversary activity pack which includes ready to colour decorated bunting, and a spitfire paper glider. Decipher Morse Code messages with this National Army Museum VE Day themed download. And the National Army Museum’s VE Day Party Pack has six designs of bunting to cut out and colour, including a lovely ‘Thank You’ rainbow.

Play popular games from the time or give traditional party games a Second World War twist. Here’s some ideas:

I hope this guide helps you have and your family have a special VE Day At Home party. We’ll be sharing what we get up to over on my Instagram stories, if you want to follow along.

Can I ask a favour? If you’ve found this post useful, please take a second to share it with your friends and followers. It lets me know that these guides are worth producing, as well as helping others find things to do with their families. 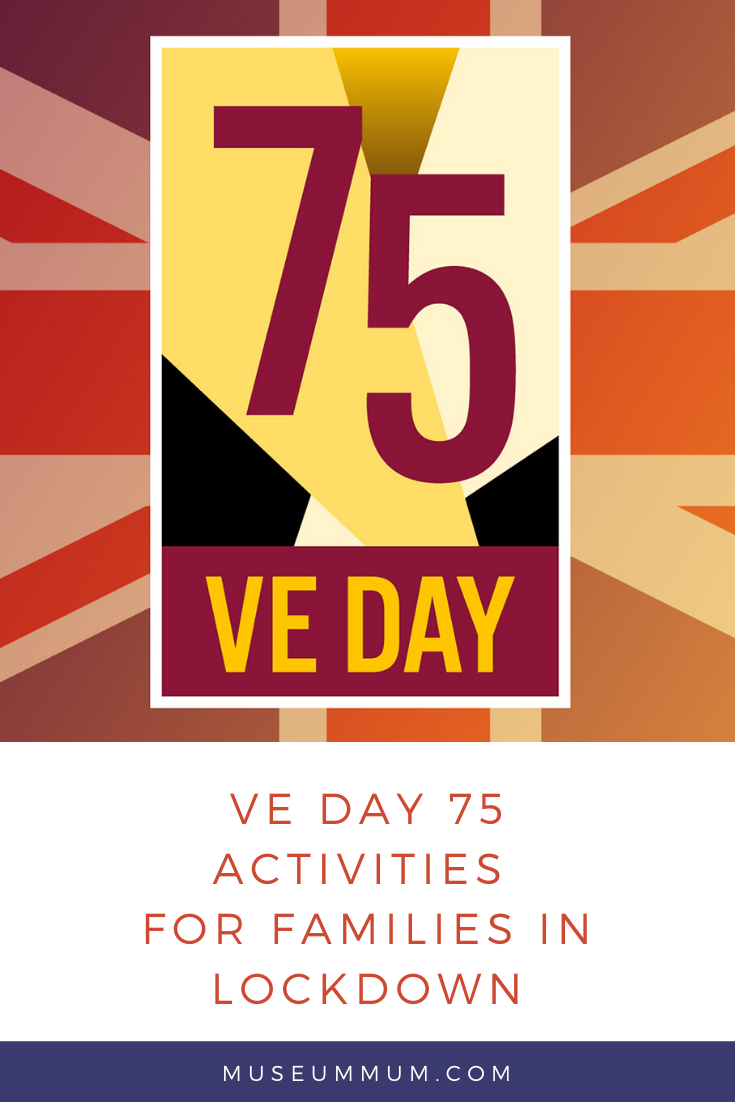