A rider thrusts his hand in the air, and the crowd cheers wildly. We can’t quite believe what we’ve just seen – multiple motorcyclists ride simultaneously inside a globe-shaped cage. The roar of their engines couldn’t block out the collective gasps of amazement, as one by one drivers join the aptly named Globe of Death. The motorcycles almost dance, streaks of dark criss-crossing the globe in every direction, even upside down. As the riders take a bow, the circus lights catch the fumes lingering in the air, a physical reminder of the feat we’ve just seen. And we still have the second half of Zippos Circus Magnificent Top Hat show to go. 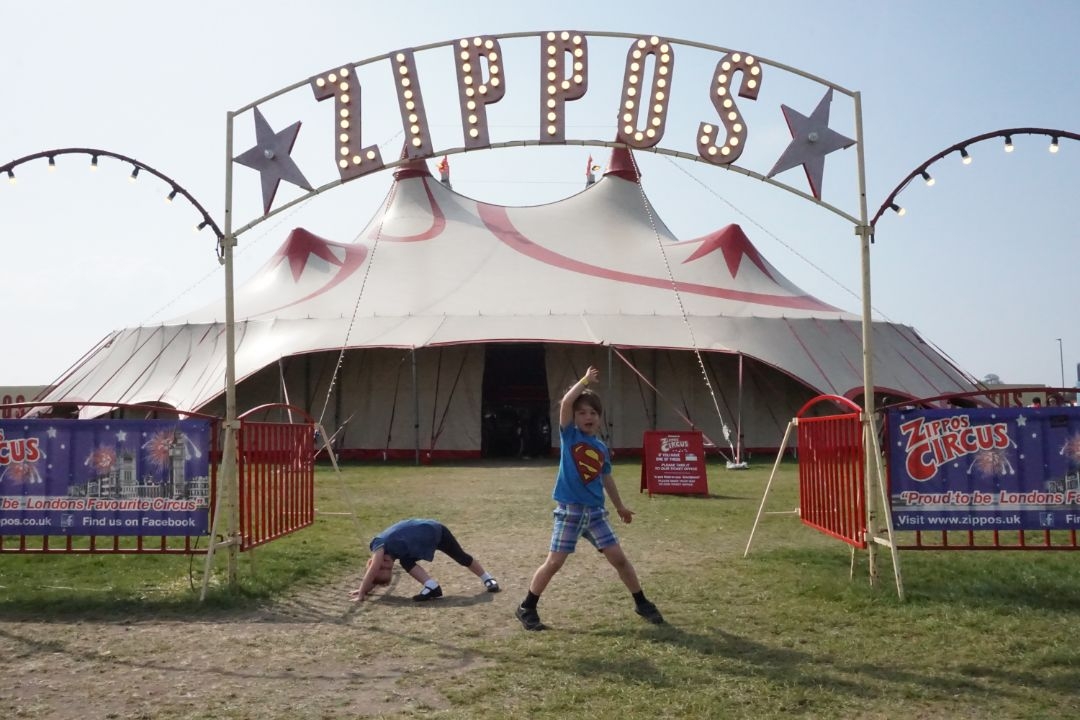 The last time I visited I circus I was probably the same age as Museum Boy is now. I remember being faintly shocked how the big top’s size and shape punctuated the mundaneness of the familiar fields. Of the show, I recall the sawdust flooring, the pathetic clown with the painted face and oversize shoes who fell into a barrel of water, and the magnificent but sad elephant.

From the outside at least, Zippos Circus big top with its peaked top resembles the circus of my youth, and inside there is still sawdust. But a lot has changed since the 1980s – including Zippos Circus, for the better.

We enter the circus tent armed with both the traditional (candyfloss and popcorn) and the noncoventional (light sabers – yes, that’s a thing at the circus now). We have great views from our our front view seats, despite being seated near the back. 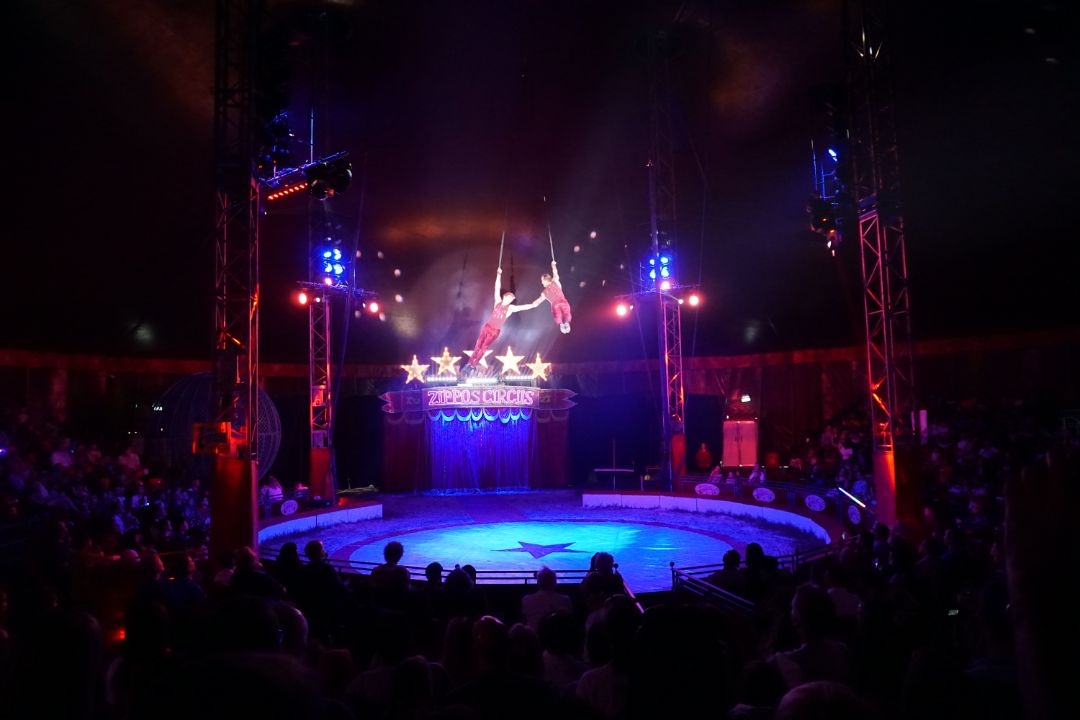 Zippos Circus plays with circus conventions. Take for example, Paulo dos Santos. At first I thought he was there only for the slapstick, a person of short stature jumping to steal Ringmaster Norman Barrett’s hat. As the show unfolds, my assumptions are shattered as dos Santos effortlessly joins in with numerous acts.  It appears there is nothing this showman cannot do, from riding a motorcycle in the globe of death, to high trapeze and acrobatics. He might be comic, but he is nobody’s clown. 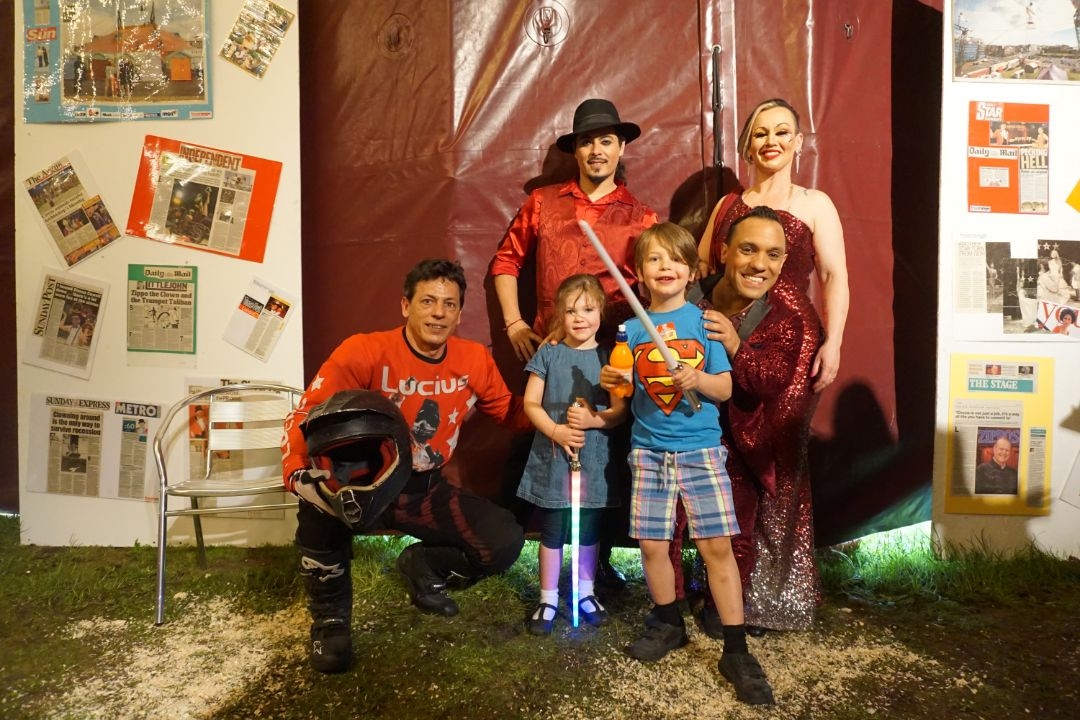 The show is a heady mix of acrobats, daredevils, contortionists and aerialists from all over the world with moments of real wonder throughout. One head-spinning act had me howling in surprise – the trapeze artist twirled endlessly, supported only by her neck. And I challenge you to not wince when Tony throws knives at a revolving Nikole, who inexplicably beams throughout. 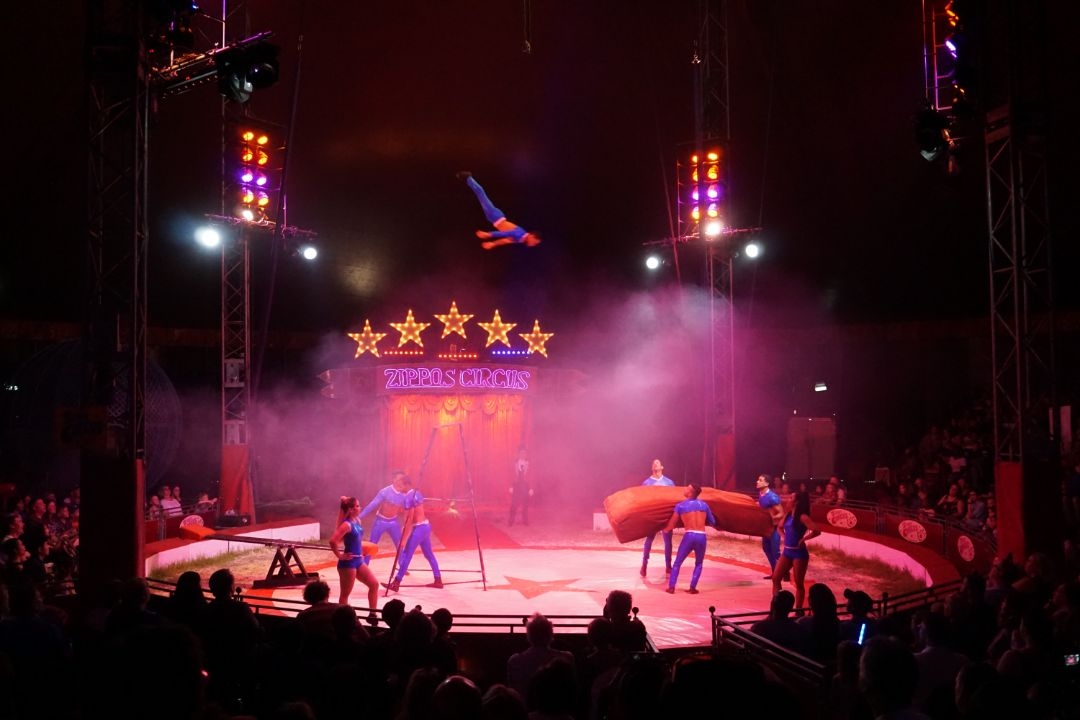 But the show is not all big and brash. It was the final, most low key act which Museum Boy enjoyed the most. Some cheeky, colourful budgies are the perfect foil to Ringmaster Norman Barrett’s pompous persona. The birds pretend to ignore his instructions, performing gentle acrobatics of their own, which has Museum Boy howling with laughter.

Museum Girl meanwhile had loved the first half, but struggled to maintain attention during the second part of the show. I would say at four years old she might be a little young for the whole two hours. However behind me younger children – including a baby – were gripped throughout. Fortunately, the exuberant acts meant nobody was distracted by a complaining four year old. 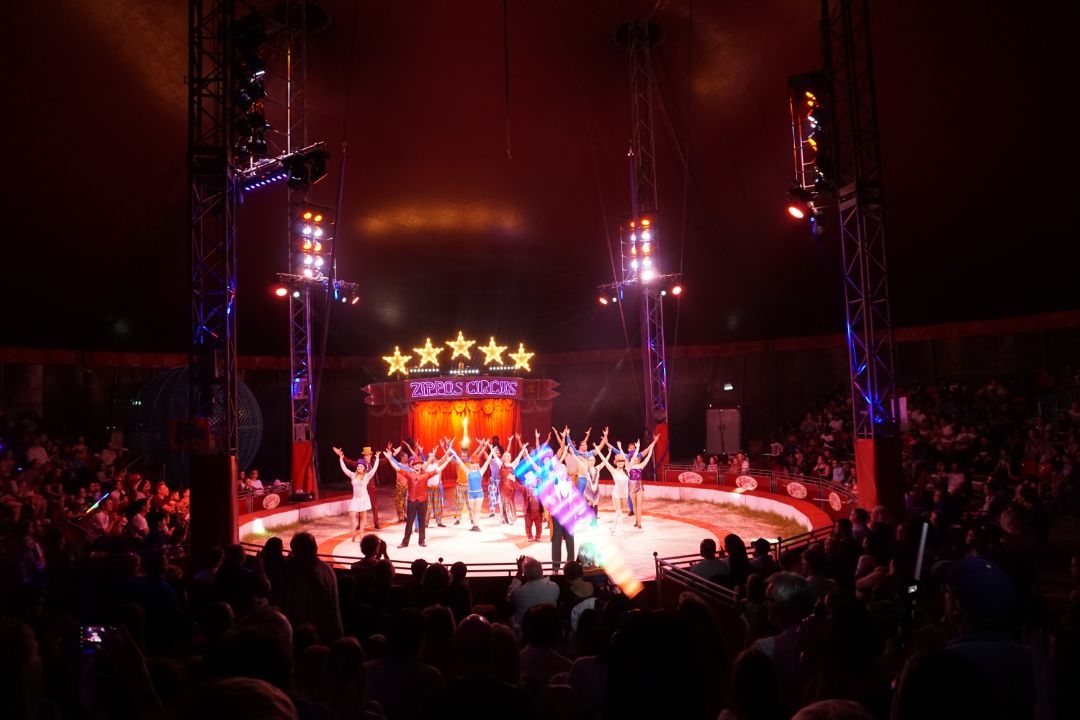 As the performers take their final bow, I am delighted to note this circus had none of the sad elephants or slightly sinister clowns from my childhood. Indeed, aside from the budgies, there aren’t any animals in this show. 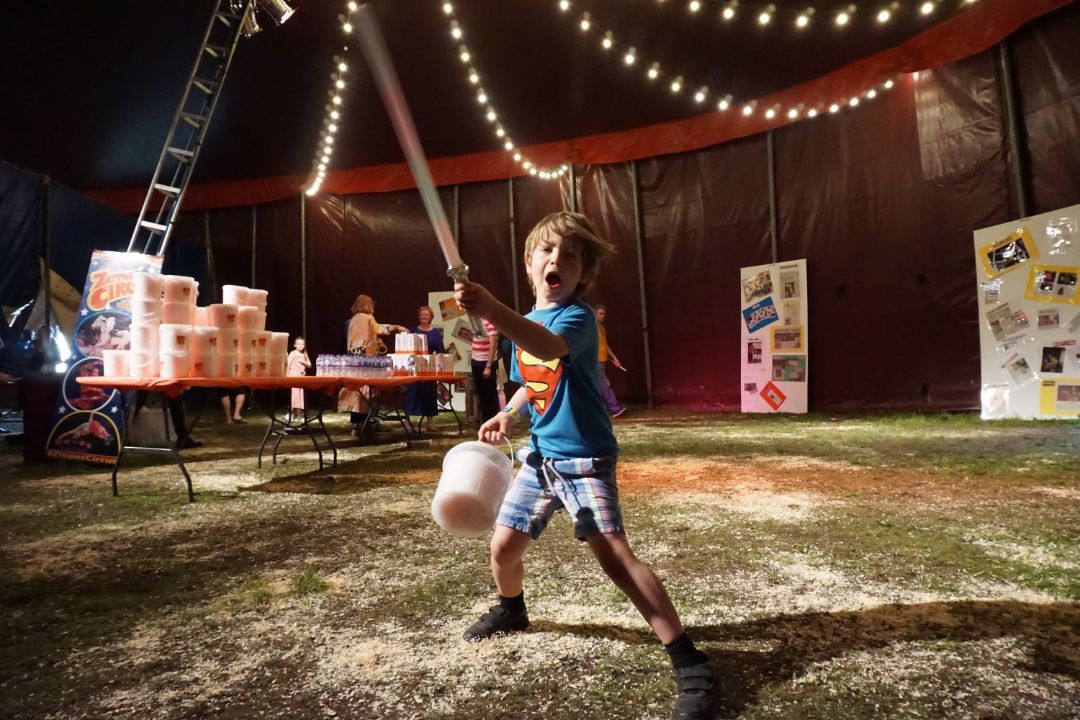 We spill out of the tent, slightly dumbfounded by the adrenalin-packed afternoon we’ve had. It’s a far cry from our typical, calm museum visits, but it’s a welcome contrast. Zippos have refreshed circus for the 21st century, creating an experience where kids can be kids whilst adults recapture a bit of their childhood too. Roll up, roll up!

Disclaimer: I visited Zippos Circus on a press day in April 2019, with Museum Dad, Museum Boy (6) and Museum Girl (4). All opinions remain my own.

Zippos Circus The Big Hat Tour is appearing all around the UK until the end of October 2019.
Adults (aged 15+) from £9; Children from £7.50; Kids under 2 FREE (if they don’t have their own seat).
Advance booking is recommended – book online and check tour dates at www.zippos.co.uk

Linking up with Truly Madly Kids for Cultured Kids 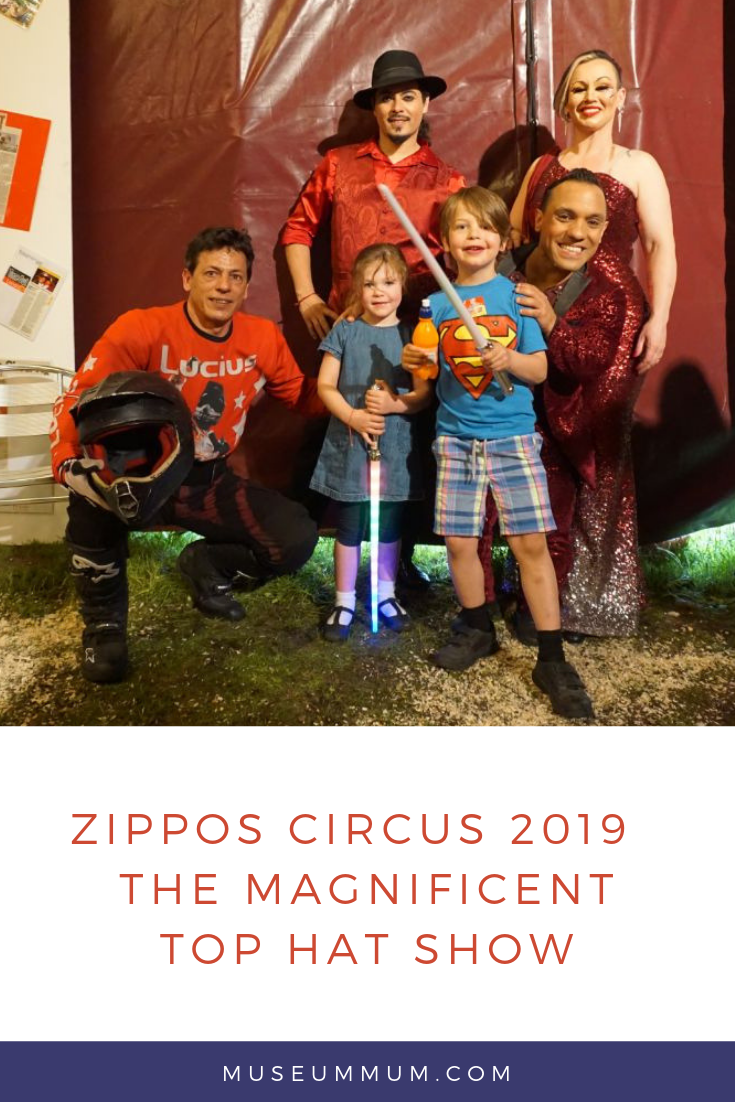