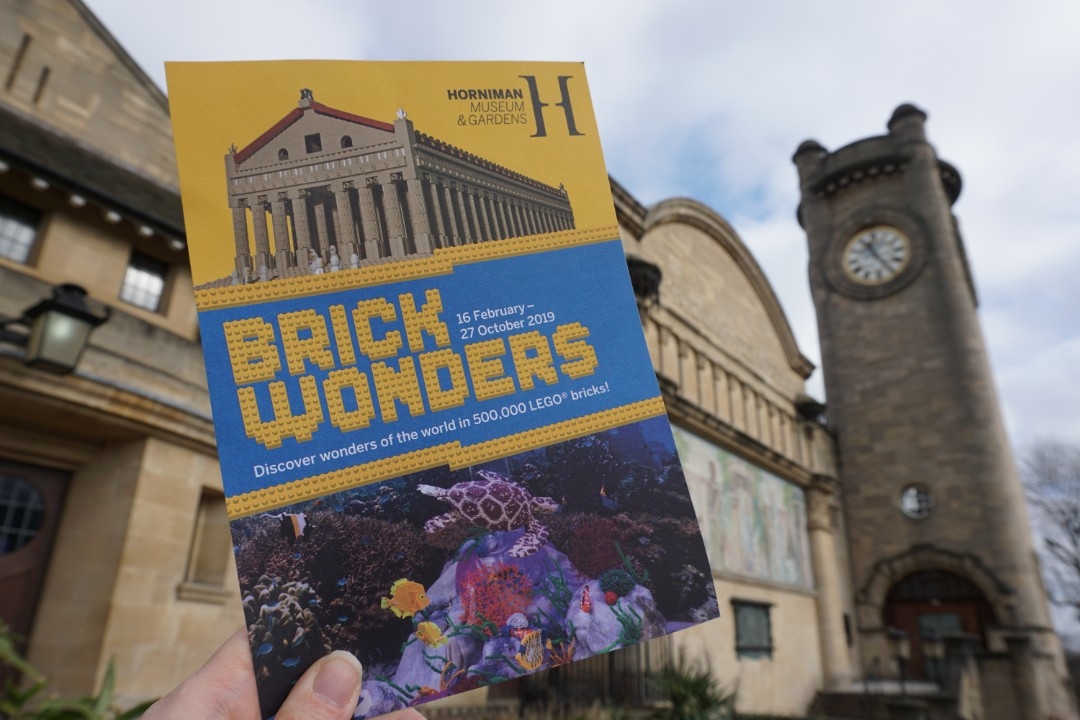 Calling all LEGO fans! The latest family-friendly exhibition at the Horniman Museum features everyone’s favourite toy building block. Brick Wonders takes us on a whistle stop world tour of natural and man-made wonders across time, all recreated in LEGO. Half a million bricks recreate 50 wonders as diverse as Niagra Falls, the Great Wall of China, and even space travel! Read on to find out what there is for families to see and do at Brick Wonders. 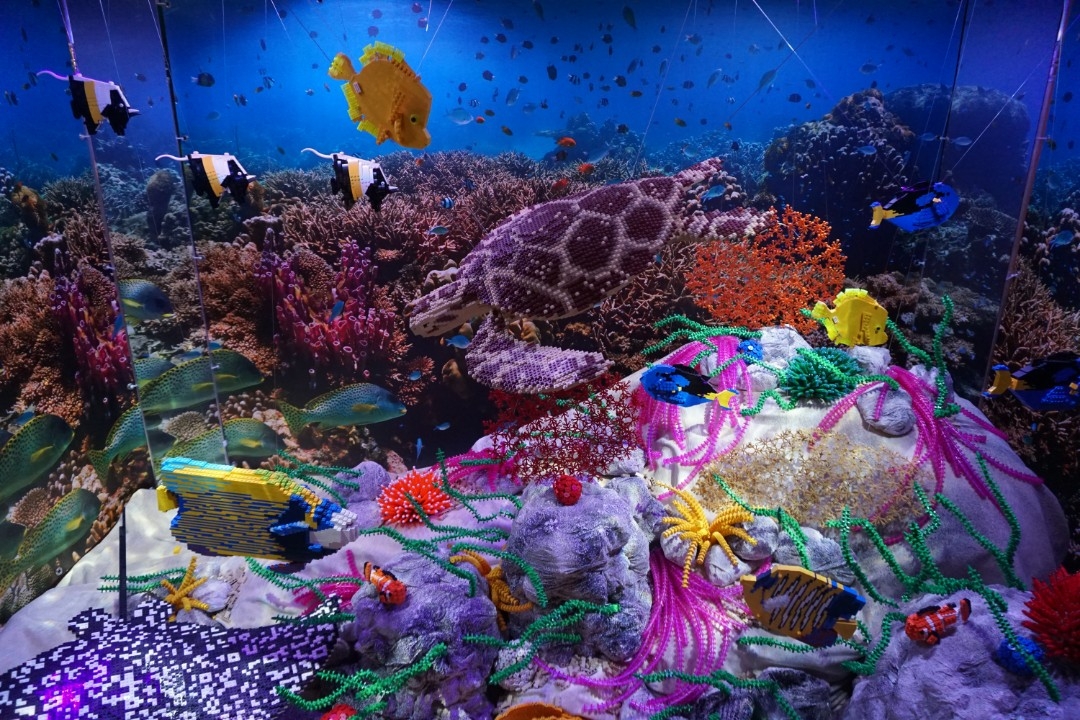 Natural wonders showcases the largest model in the exhibition, a diorama-like Great Barrier Reef. The clever model is almost lifelike, with its splayed sea anemones and brightly coloured fish suspended as if in water. As the Horniman Museum has its own aquarium in the basement, this feels like a very fitting display.

Each model has more details about its making and the wonder it represents. We marvel over how long each model takes to make and how many bricks they use. There is more detailed information about the animals or places depicted which will interest older children and adults. 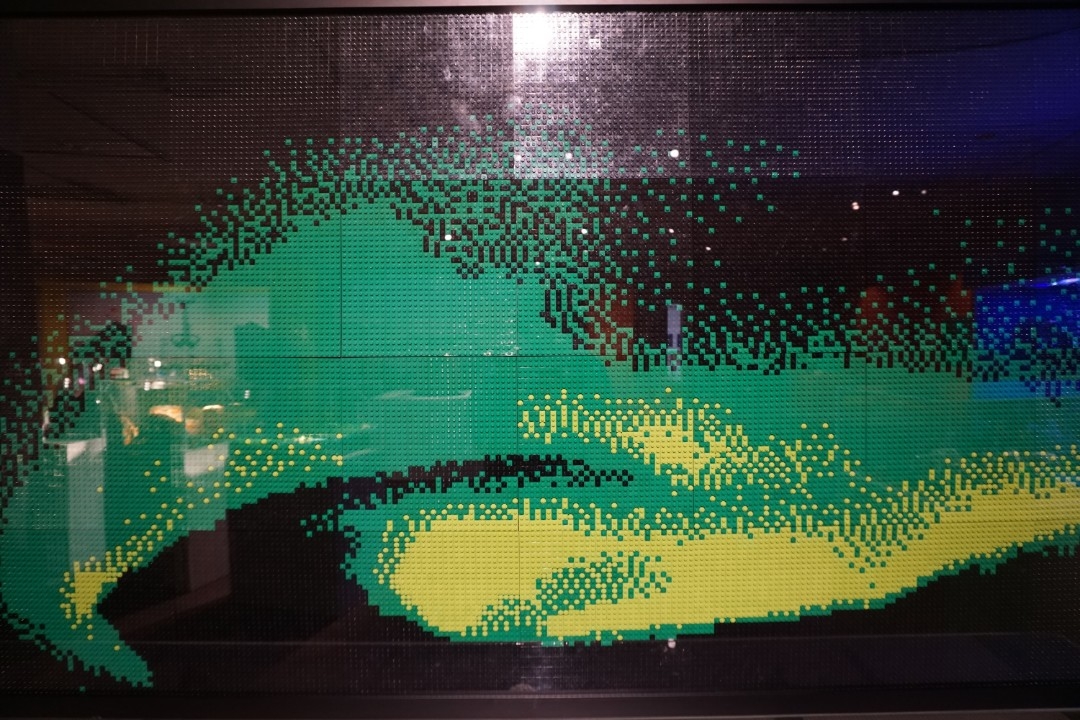 It is not only the kids who will be learn something from Brick Wonders. I mistook this mosaic for the Northern Lights – am I the only one not to know that there there is a matching Aurora Australis over the South Pole? 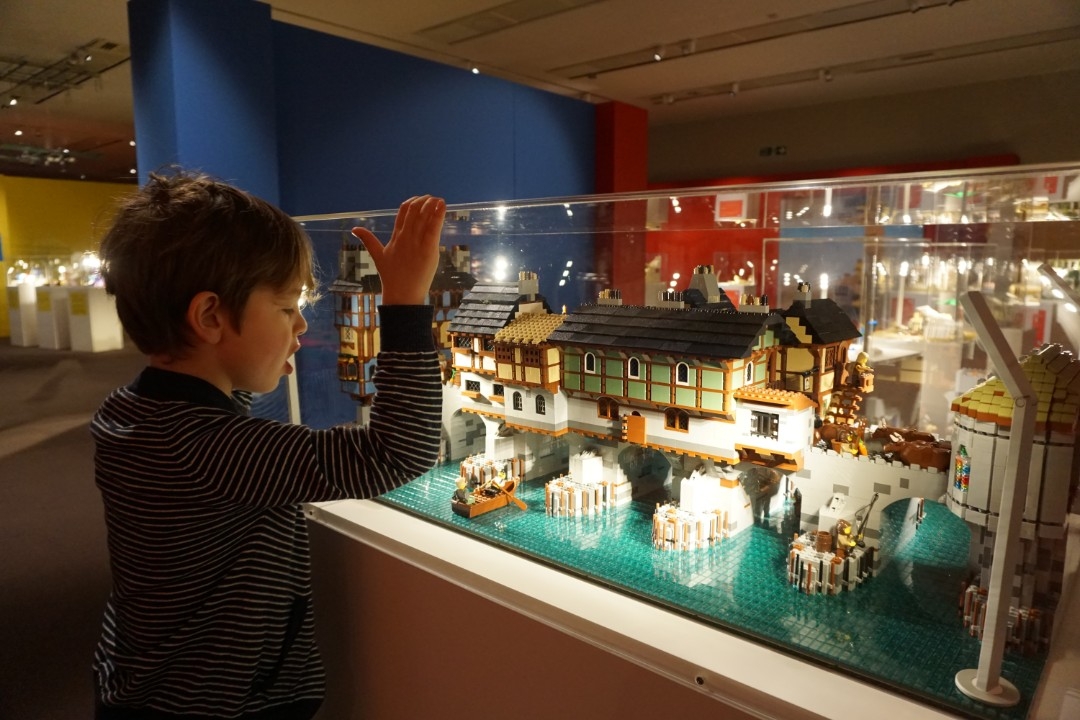 This model of Old London Bridge really captured Museum Boy’s interest. Crowded with buildings, there’s plenty to look for –  such as the cowherd, or man drowning in the Thames. I must admit I was slightly disappointed that there are no heads on spikes though. 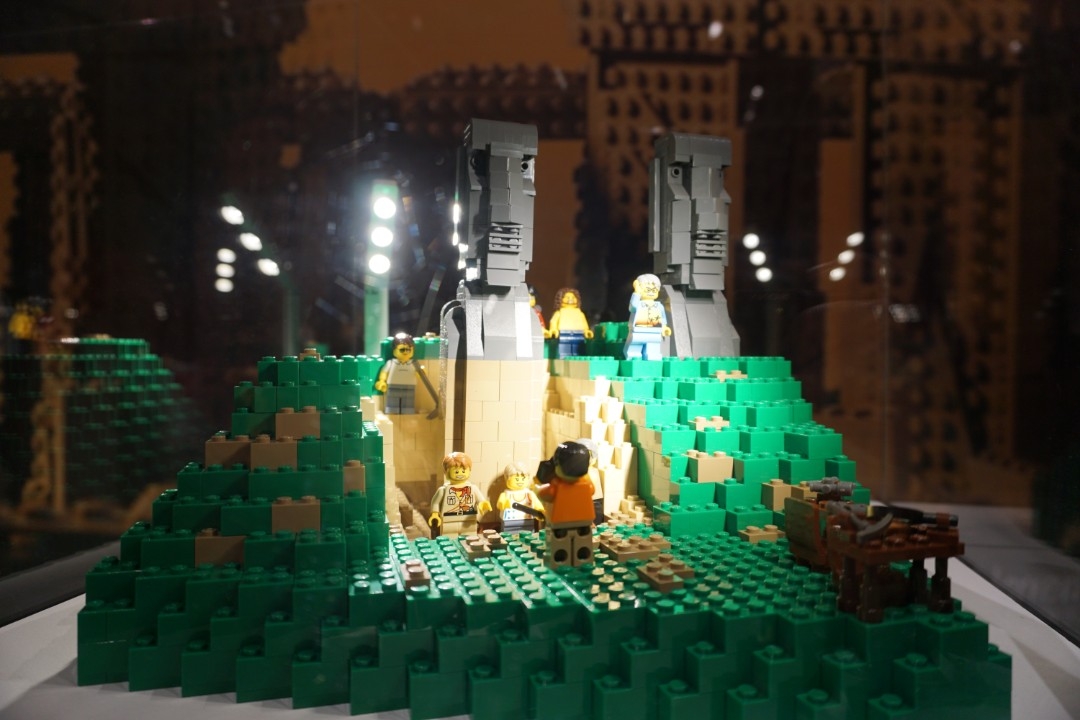 And here’s another thing these little bricks taught me. The Easter Island ‘Moai’ (or gigantic human figures carved from sold rock) actually had bodies as well – this model shows one being excavated. 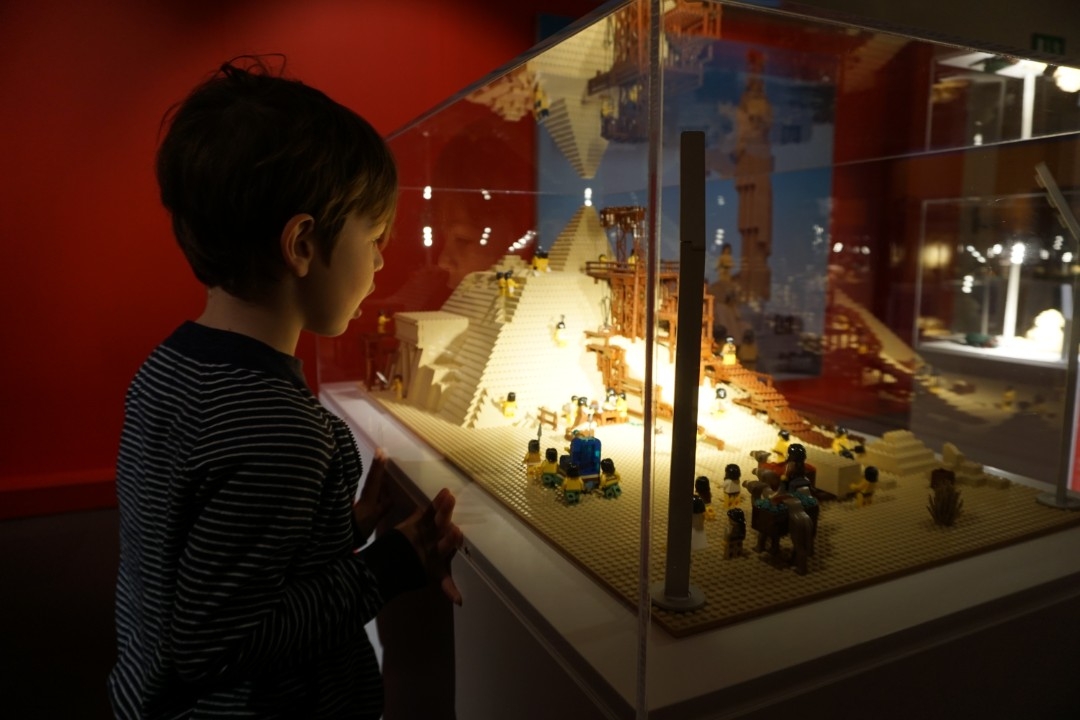 Our favourite model of an ancient wonder is the Great Pyramid of Giza. The largest of the traditional seven wonders of the Ancient World, it is the only one to survive today. I learnt that it remained the tallest manmade structure for nearly 4,000 years – eat your heart out, Burj Khalifa. The original took 10,000 workers between 10-20 years to build, whilst the LEGO version needed a more modest 96 hours (and 5000 bricks). 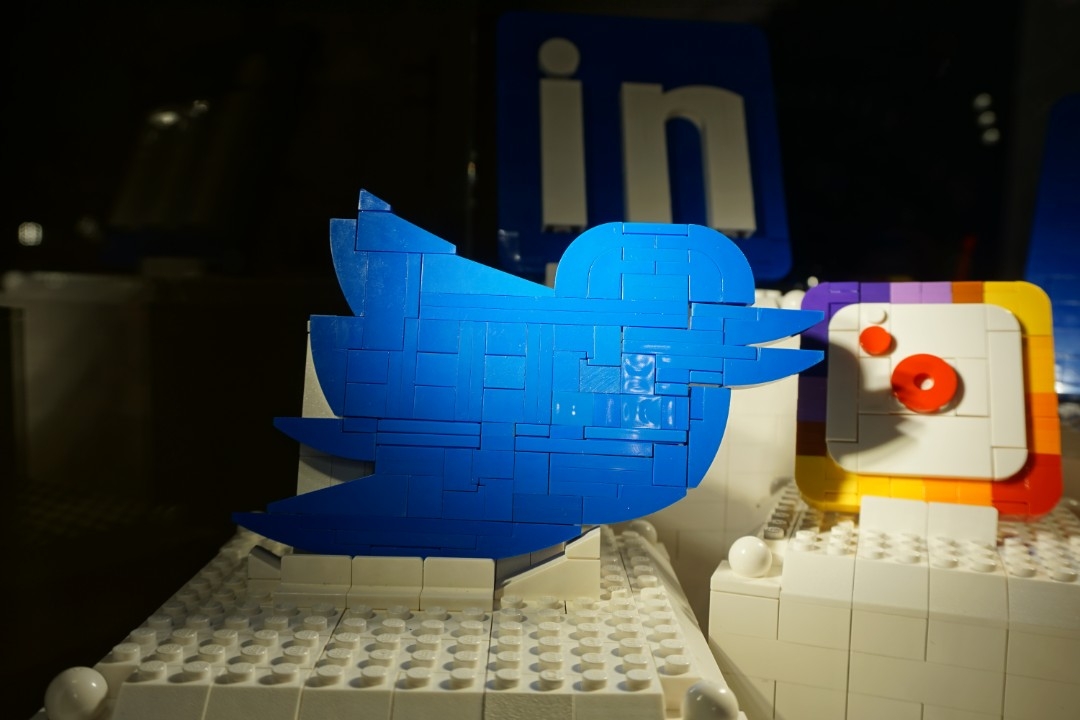 And what might be the greatest achievements of the last hundred years? Brick Wonders has selected a few, some more tongue in cheek than others. Whilst I wouldn’t classify Twitter as a modern wonder, it’s fun to see its iconic logo recreated in LEGO. The huge advances in medicine are perhaps a more worthy candidate, although this gets me thinking how sad it is that this can’t be accessed by the poorest and most vulnerable in the world. Perhaps the same can be said of all the wonders, present and past. 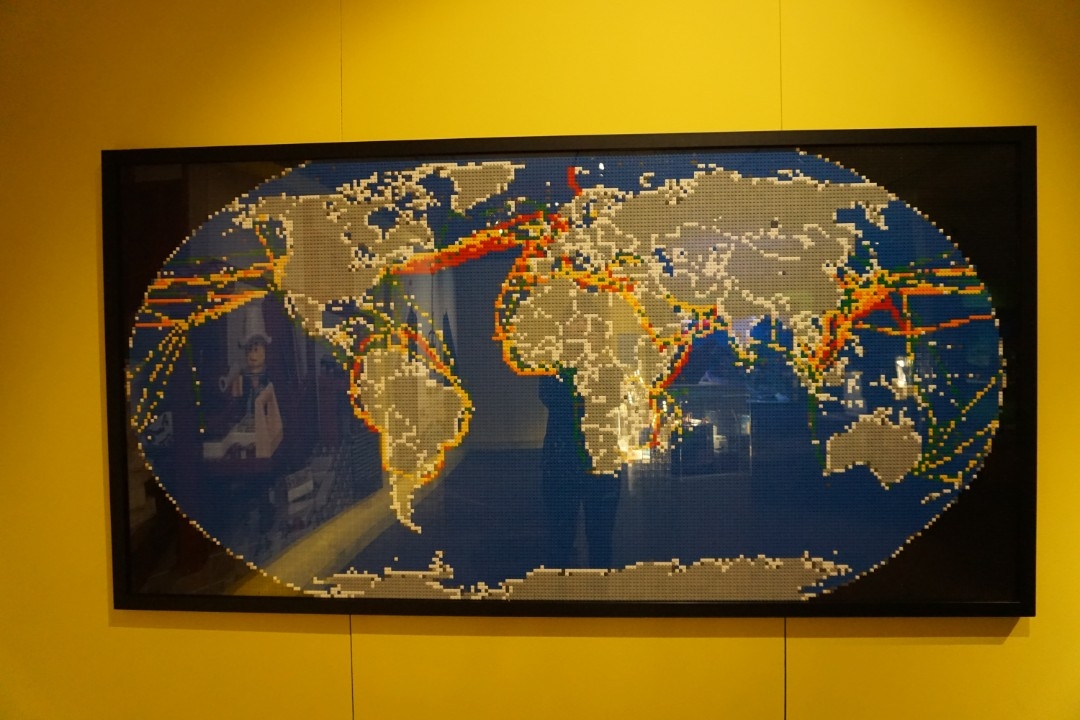 My final revelation is with this giant mosaic, made up of 98,000 LEGO pieces. I have never thought about the hidden infrastructure which allows my messages and images travel around the world. This map shows the huge under-sea cables which carry data, colour coding them according to how quickly they transfer data. Mind. blown. 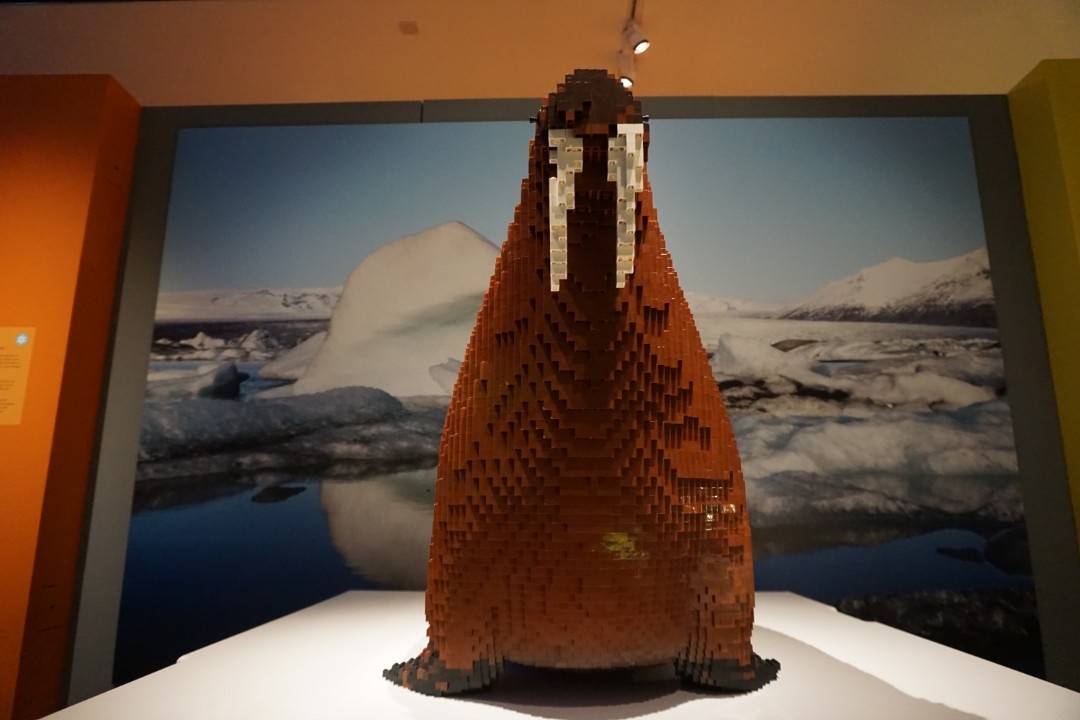 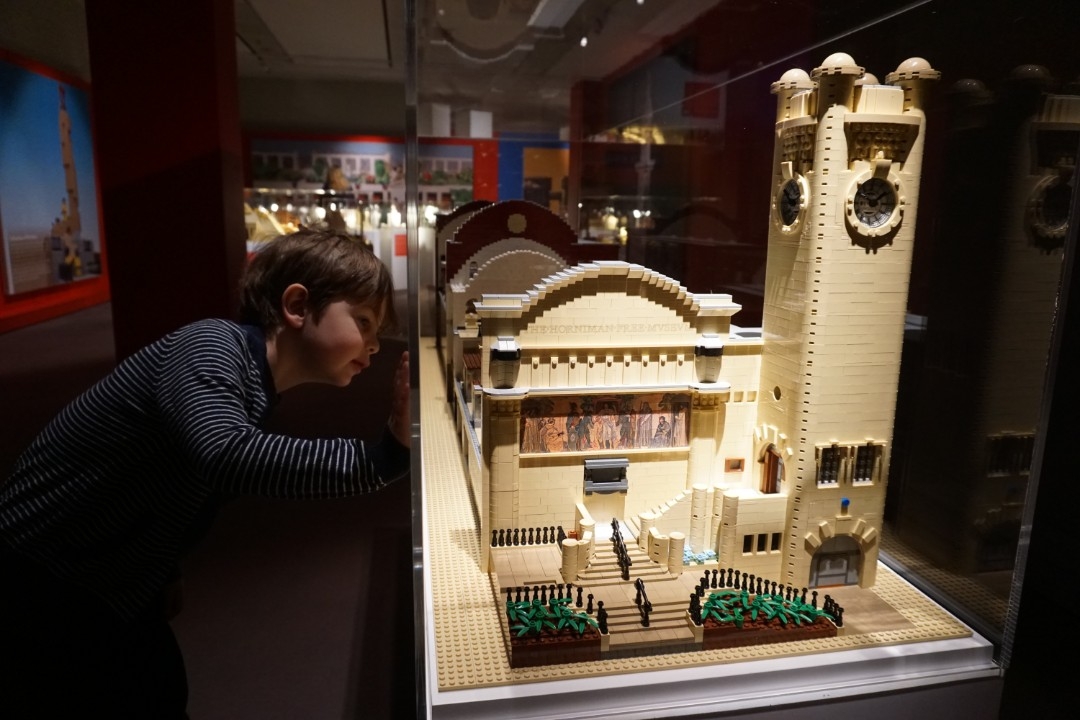 The exhibition has two specially commissioned models – a large recreation of the Horniman walrus, and – my personal favourite – a scale model of the museum itself. I love its attention to detail and witty touches, such as the croissant LEGO piece used for the walrus’ moustache! It’s also the only model which doesn’t tell you how many bricks it uses. Enter the competition near the exit, and if you guess correctly, you could win a LEGO giftcard. This incentive had Museum Boy and I dashing back round the exhibition to look more closely at the brick count in the other models. 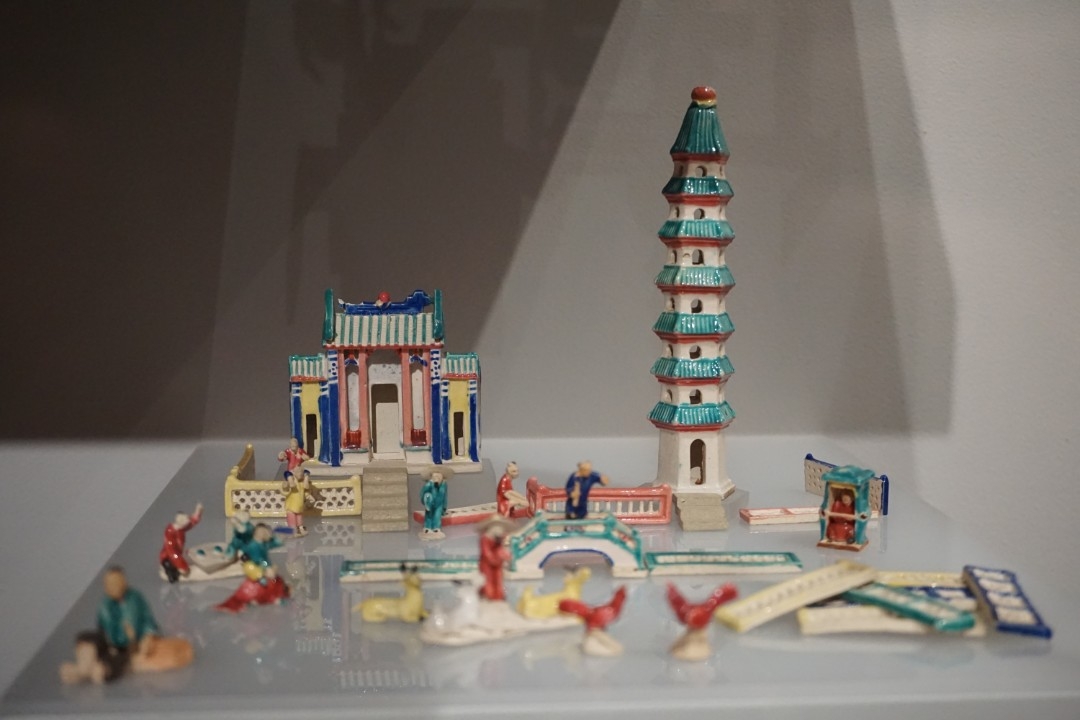 Also on display are some historic miniatures from the museum’s collections, including these beautiful toy buildings from China, which about a hundred years old. This small section explains why the popularity of small models endures. Making simpler, smaller models helps us understand complex ideas, and imagine different worlds.

Hands on play in Brick Wonders 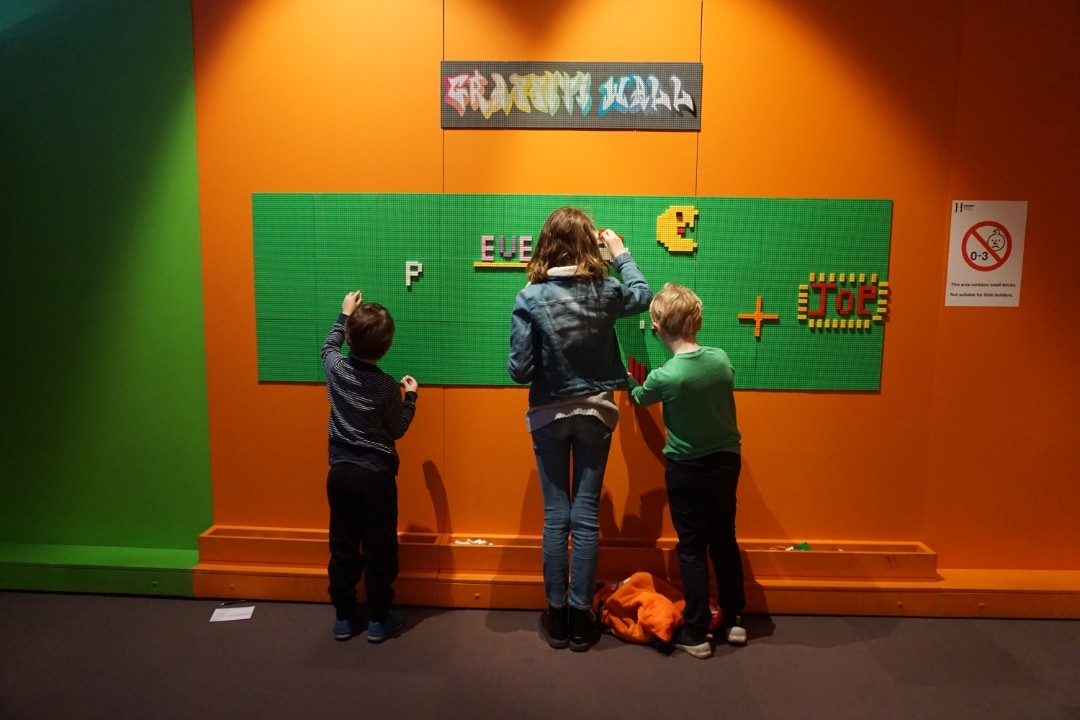 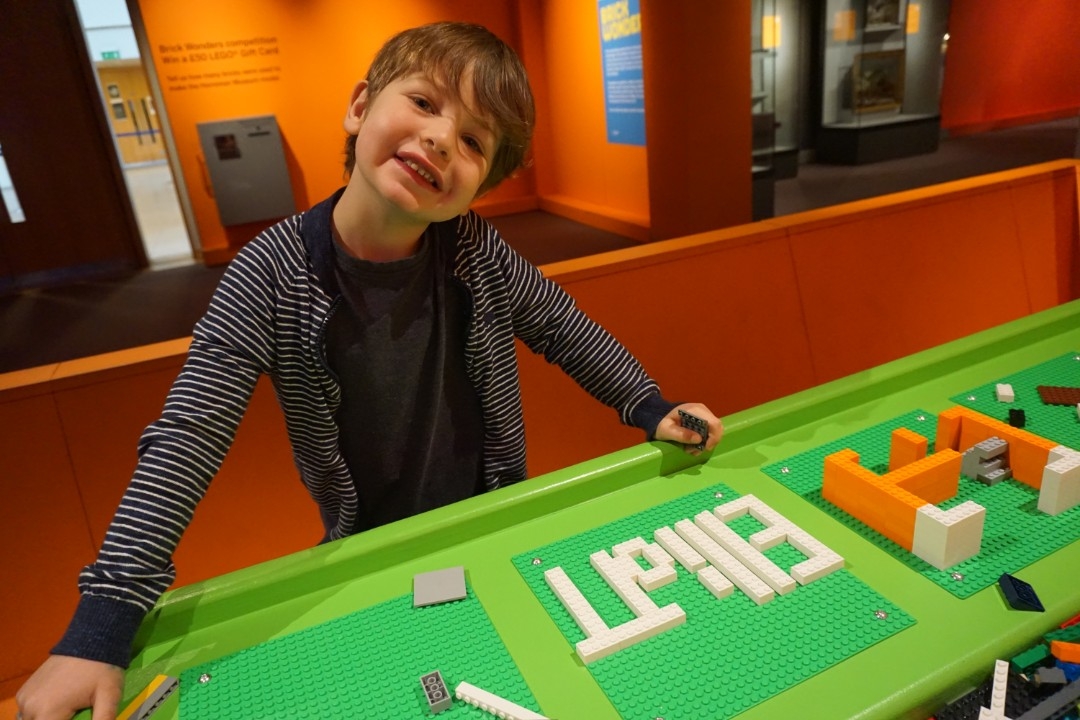 There’s plenty of opportunities for inspired children (and adults) to create their own wonders, with LEGO and Duplo play areas. The LEGO grafitti model might be the only time you encourage your kids to tag a wall. Using giant rubber blocks, Museum Boy built his own bridge that was strong enough to walk on. And if you’ve had enough of bricks, there’s reading, dressing up and craft tables too. 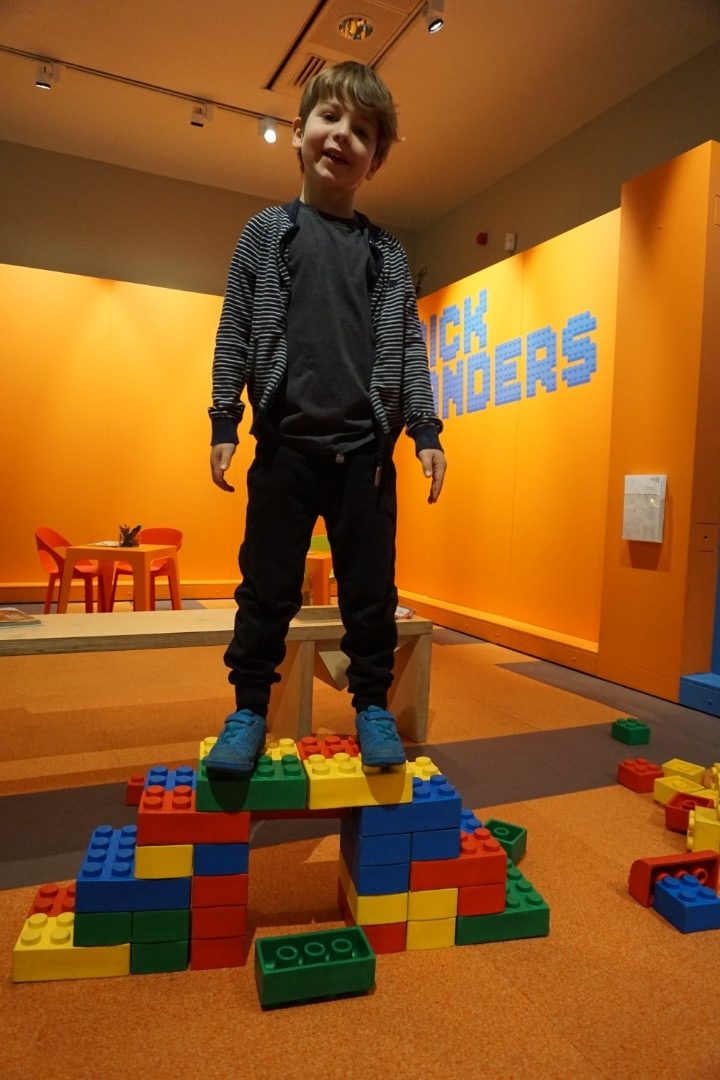 If you’re looking for a sure-fire fun family day out in London, Brick Wonders is yet another reason to visit the Horniman Museum. You’ll enjoy it so much you won’t even realise you were learning at the same time. As Museum Boy says, ‘it’s AWESOME!’ (Sorry. I *almost* made it through a whole-LEGO related review without the A word.)

Disclosure: I attended a press preview Brick Wonders at the Horniman Museum in February 2019 with Museum Boy (6). 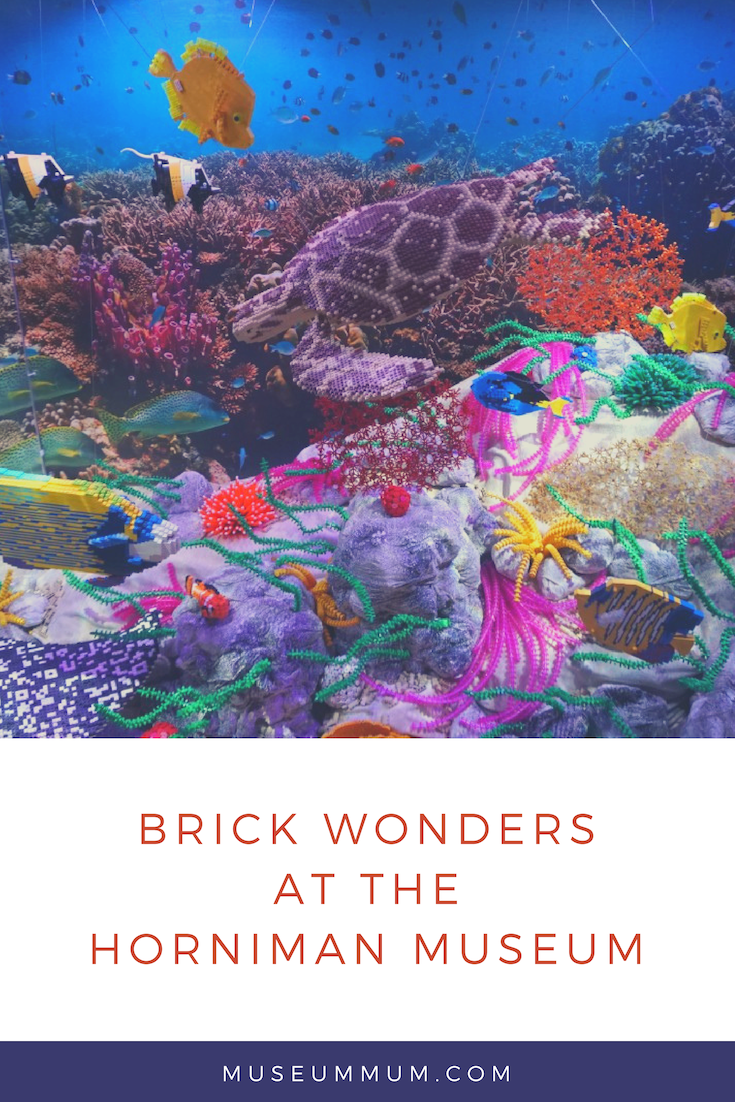