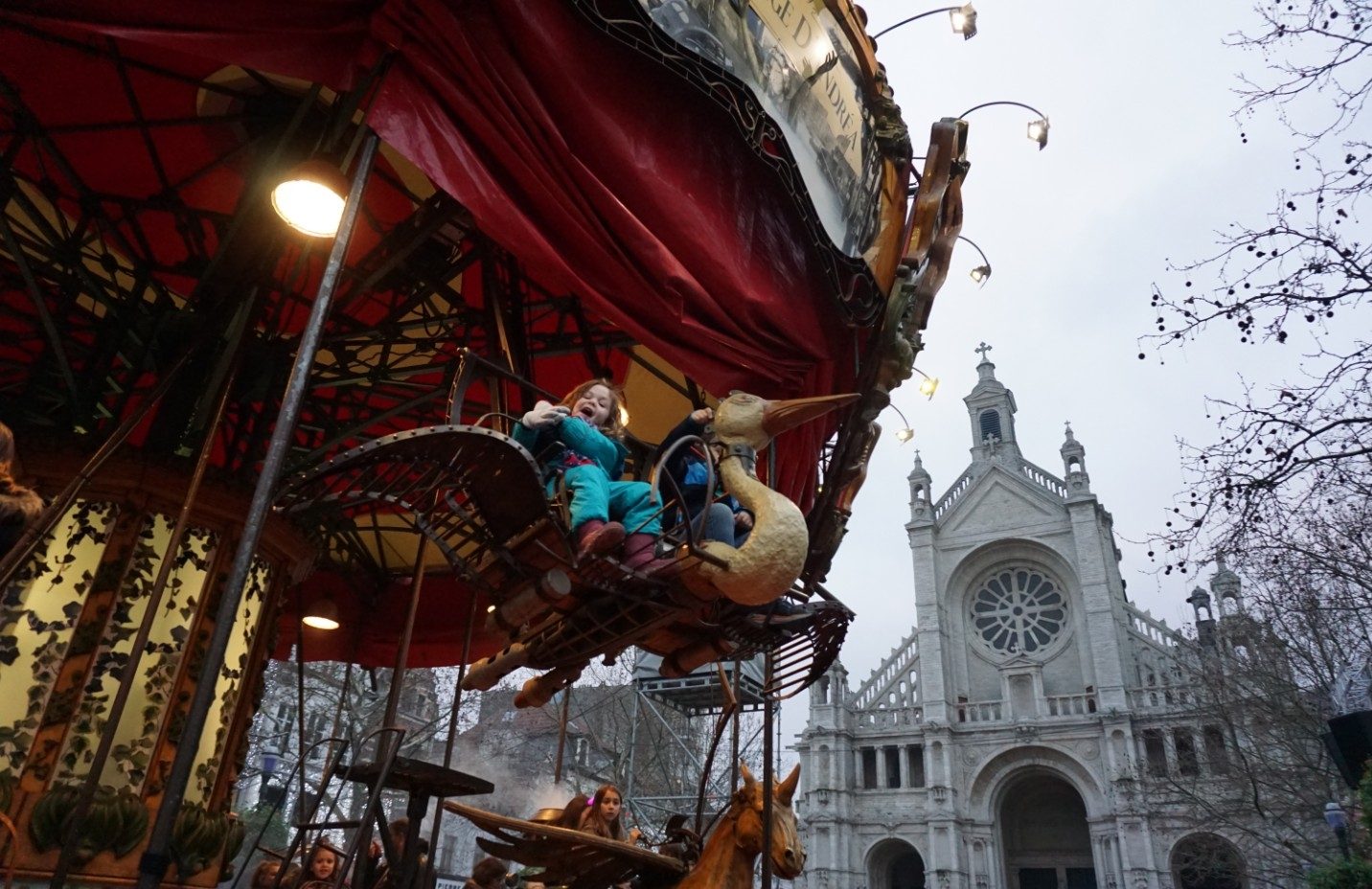 We never usually holiday over winter, preferring to spend our precious leave and holiday funds between the warmer Easter and October half terms instead. But the five, dark winter months can drag so this year we decided to embrace the seasons, and take a winter’s break to Brussels.

Contrary to advice received before our break, Brussels certainly isn’t boring! The Belgian capital’s mix of festive activities, museums and beautiful woodland make it a fantastic place to visit in winter. And it’s only 2 hours from London on the Eurostar, or just under four hours by car. Wrap up, and I’ll take you on a highlight tour of Brussels in winter with kids. 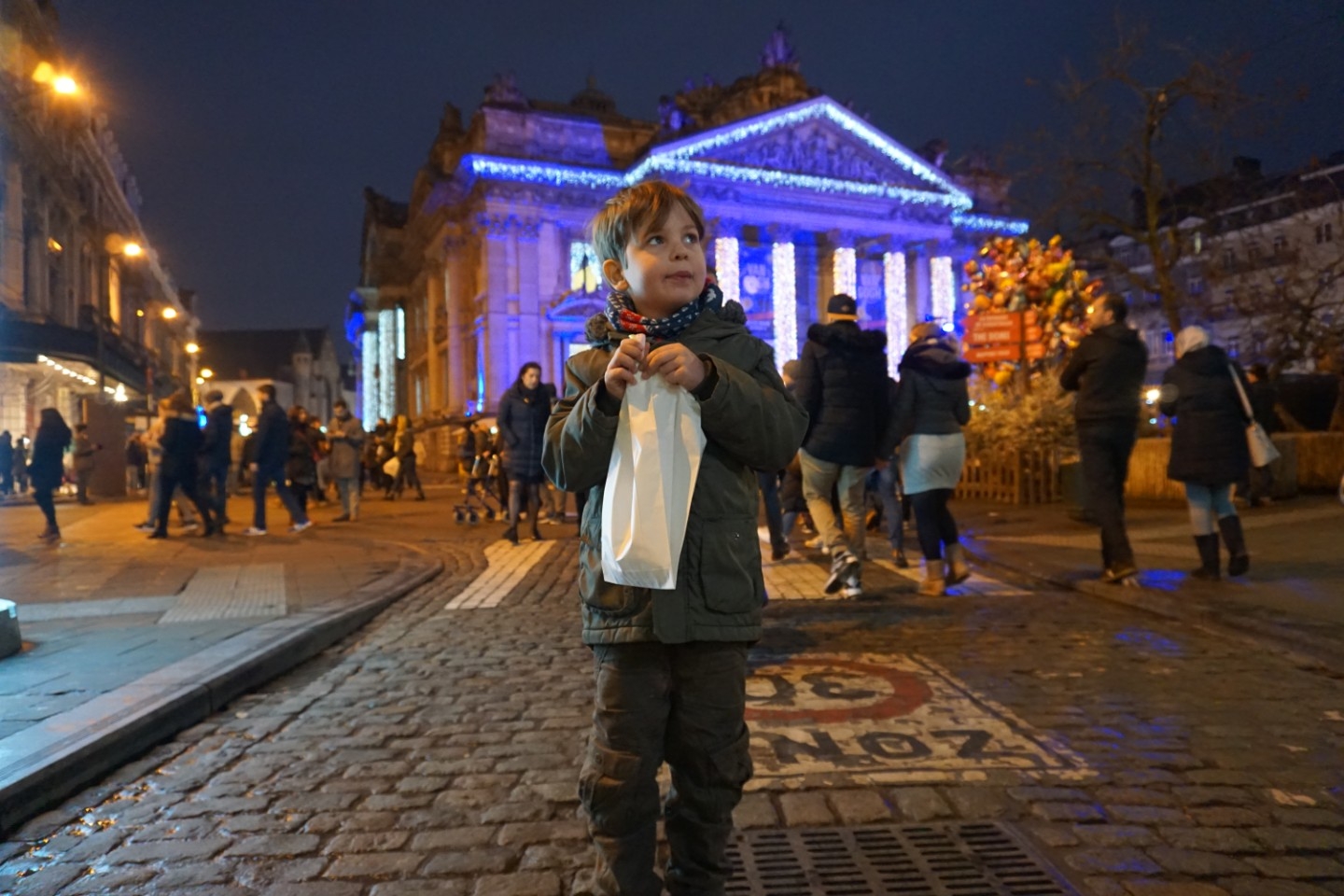 Brussels hosts the largest winter market in Belgium with over 200 stalls and fairground rides. Every year the Brussels Winter Market has a different theme – a celebration of Finland during our visit. The Winter Market runs until early January, unlike many others which close before the big day. This makes it a great to visit during ‘twixmas’, the limbo period between Christmas and New Year. The Brussels Winter Market is spread out over four areas, and the cobbled streets make it hard for buggies and scooters to traverse the streets. So for little ones we recommend heading straight to Place Sainte Catherine. 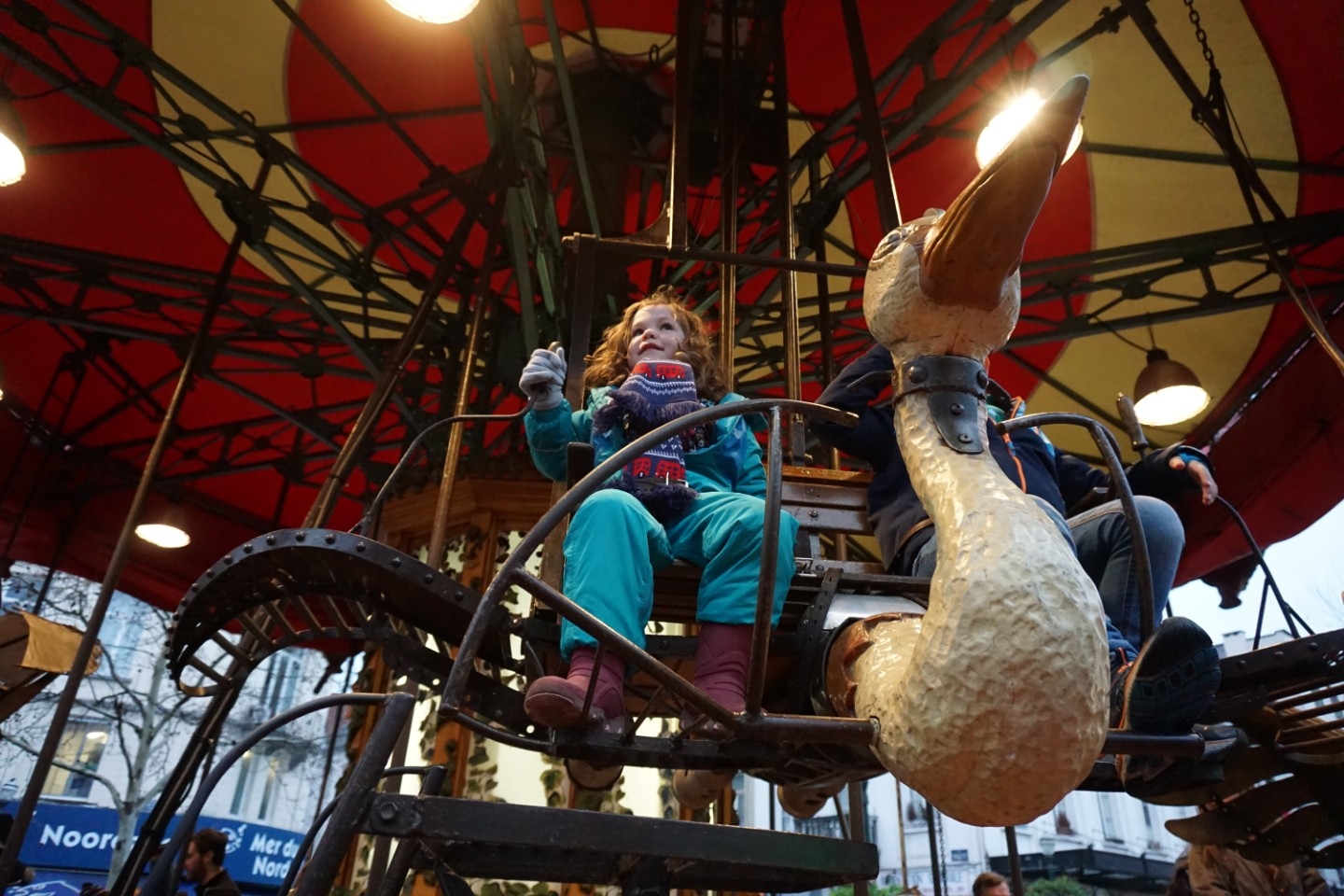 We thought Place Sainte-Catherine was the most magical part of Brussel’s Winter Market. This charming little square is noticeably less busy and commercial than the other areas. Our kids loved the steam punk style carousel, where every animal moves differently. Part of the fun was choosing which one to go for, and they enjoyed it so much they wanted multiple rides! At €2 a ride it was easy to say yes. The square is also home to upmarket food stalls, including premium waffles and fresh oysters, more of which later. The kids were transfixed by the stall smoking salmon on an open fire. 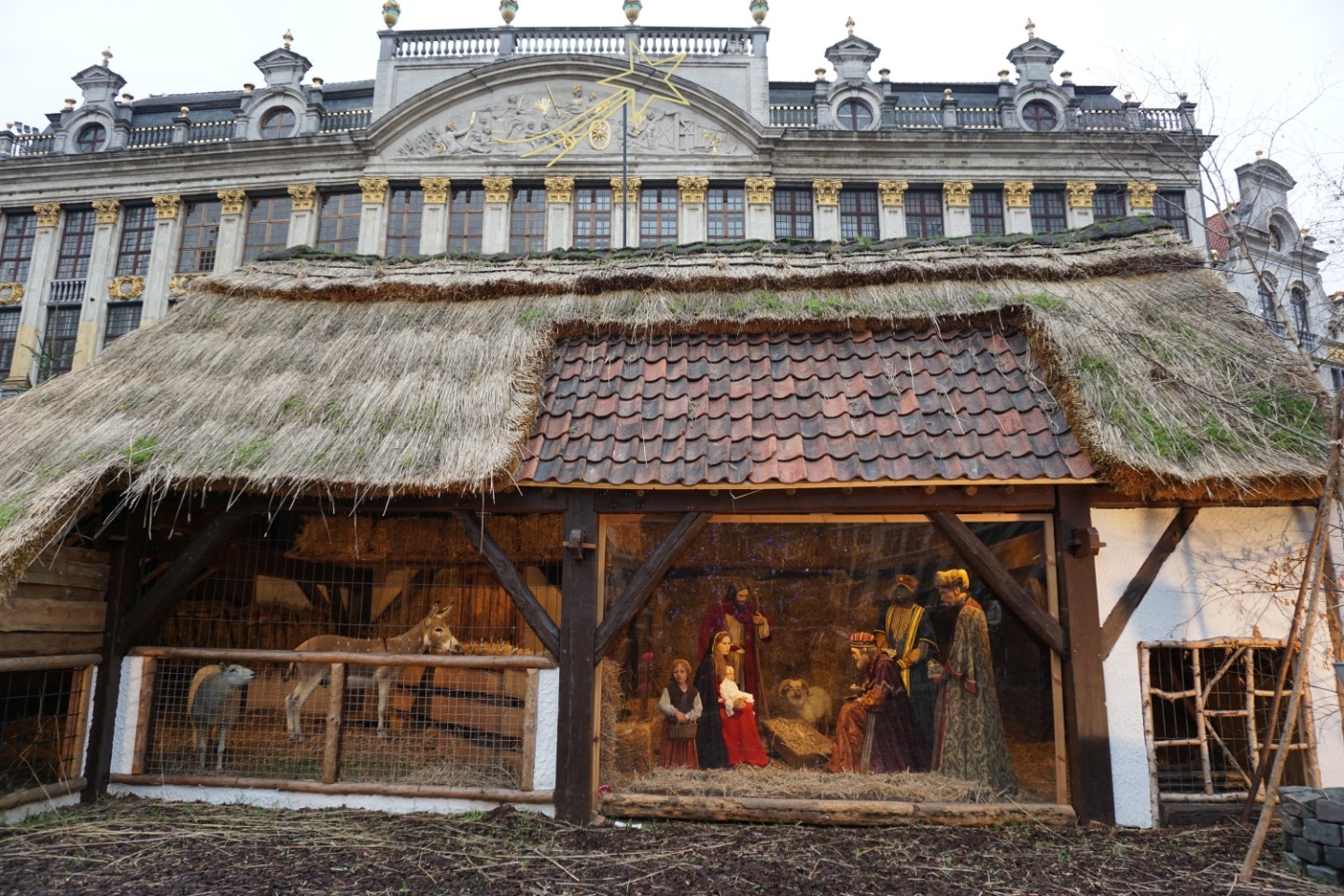 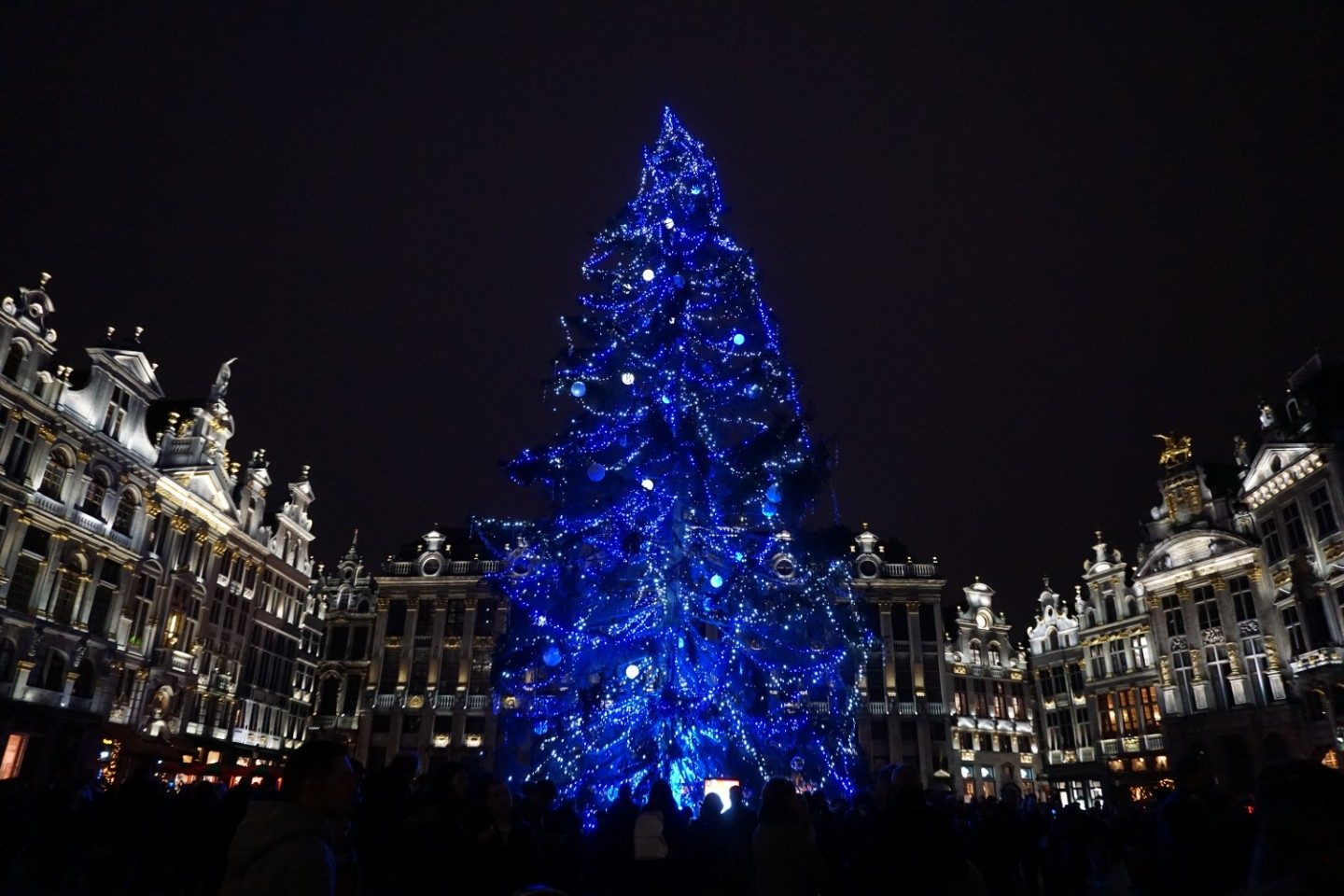 The 17th century Grand Place plays host to a life size manger, and giant Christmas Tree. This year’s tree was over 22 metres high, and lit in the blue and white colours of the Finnish flag. 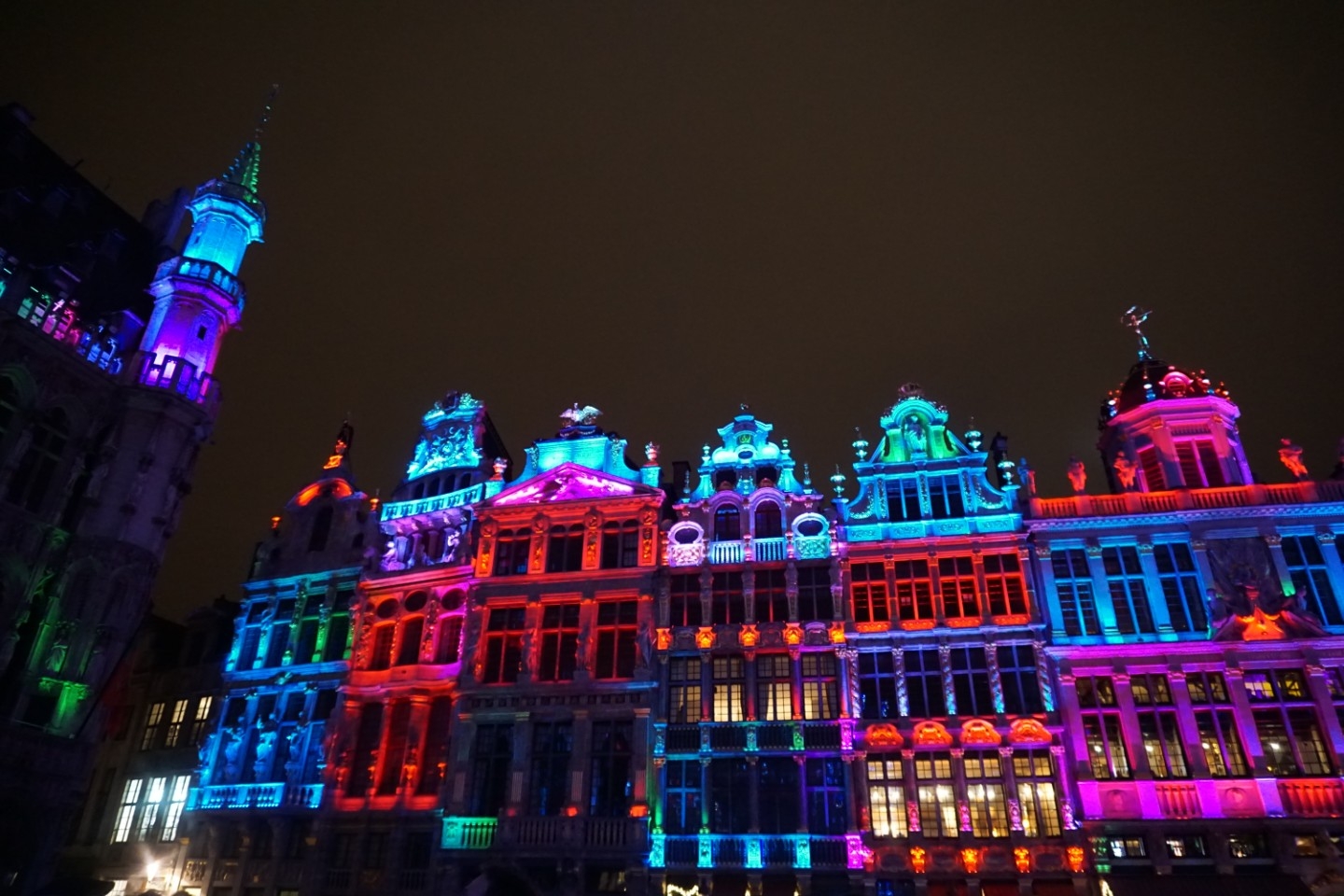 After dark the Grand Place is also home to a spectacular light and sound show, which happens every half hour, on the half hour. This year’s was inspired by the Northern Lights.  Seeing the grand historic buildings transformed by a rapidly changing kaleidoscope of lights was a very special experience. When we visited, at 6pm on New Year’s Eve, it was popular but not too busy. There isn’t much to do in between, so do try and time your visit as close to the light show start as possible. And be prepared to go home with more than you expected – there are lots of hawkers selling plastic light up swords, much to the annoyance of these parents at least.

If you fancy something indoors, Brussels has plenty of great museums that will keep you and the kids entertained. Here’s three suggestions. 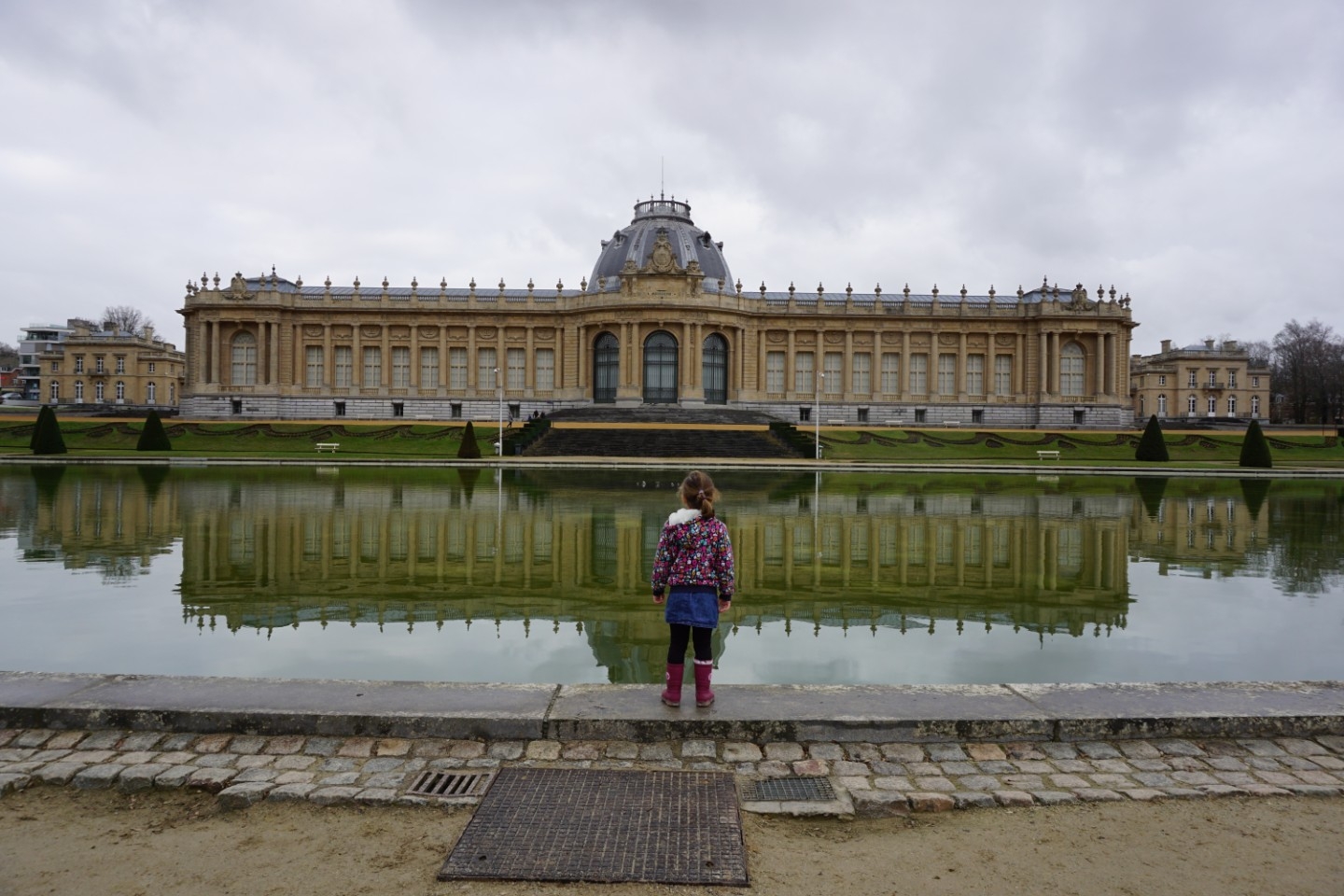 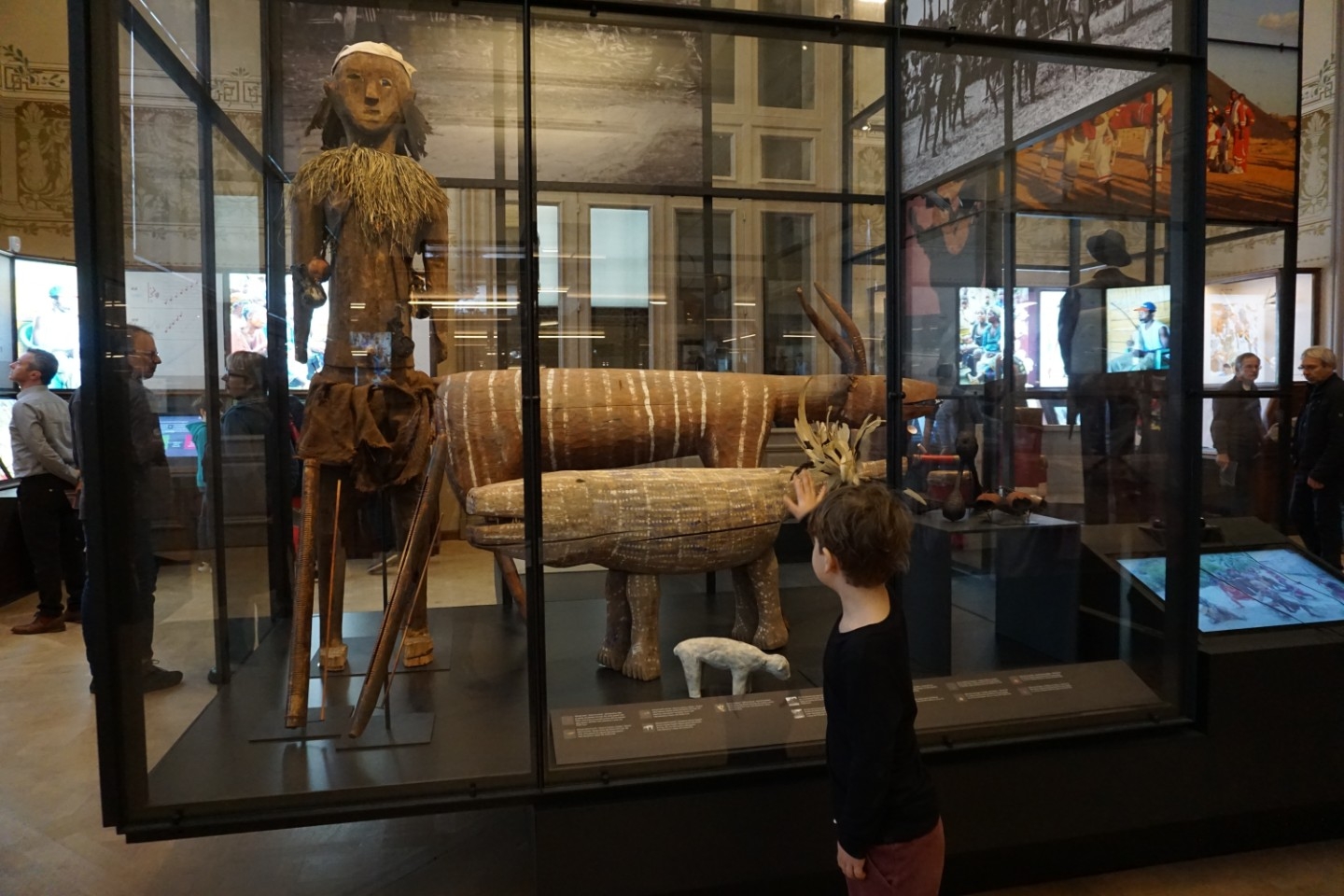 Newly reopened after a major five year refurbishment, the Africa Museum looks at the cultures, archaeology, history and natural history of central Africa. It’s home is 19th century but the approach is distinctly modern. The dark history of the Belgian empire is explored, and striking contemporary artworks take an overtly anti-colonial stance. Museum Boy loved showing me the animals he knows from CBeebies. To my relief, everything has an English translation. It’s not perfect – there are few hands on exhibits and half the digital interactives weren’t working on our visit. But it’s a great way to give your children a taster of African culture and nature. Plus the connecting tunnel has floors so slippy your kids will be merrily skating out. 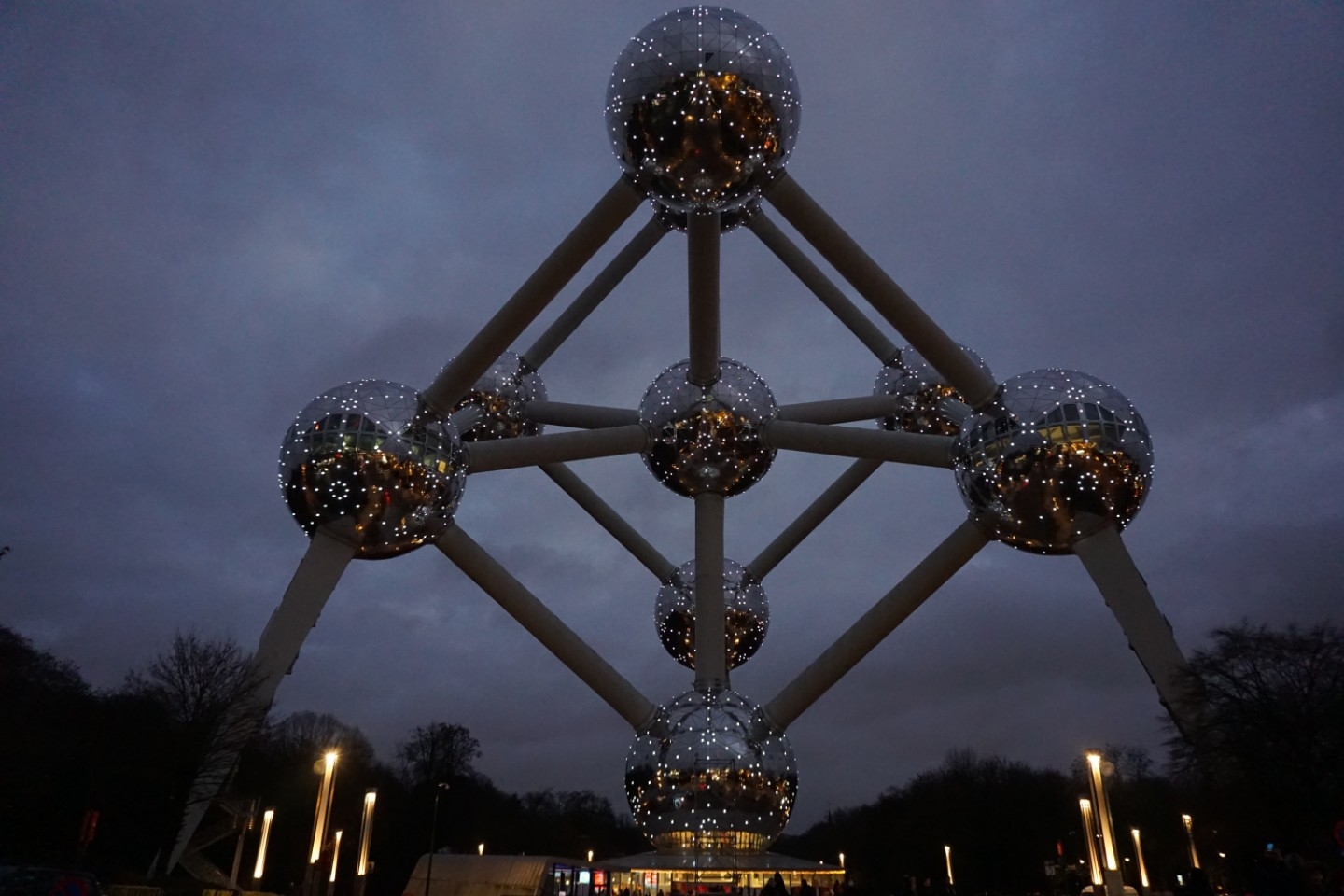 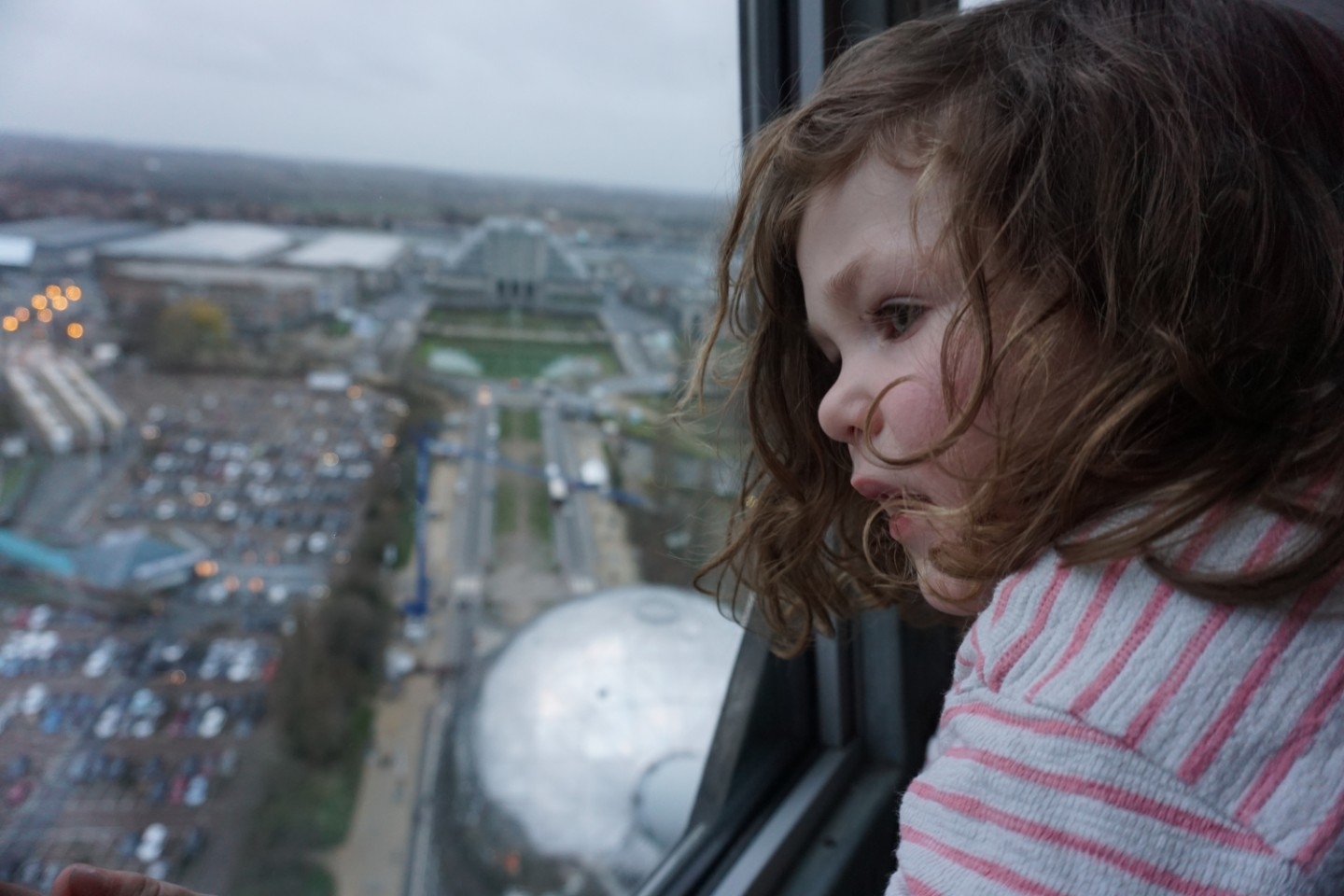 Originally a temporary structure built for the 1958 World Fair, the Atomium is now a symbol of the city and a popular visitor attraction. Although many people just come to see its iconic exterior, it’s worth visiting the inside too. Whilst the history displays are a little dry, exploring the interiors and riding the enormous escalators more than make up for it. Expect the unexpected – on our visit there was essentially a rave going on in one of the atoms! Afterwards, take a lift to the viewing platform to get spectacular 360 degree views. The skyline is well labelled so you can answer the kids’ questions with confidence. Winter is a great time to visit as the shorter days mean you can see the Atomium lit up in the dark and still get home for bedtime. 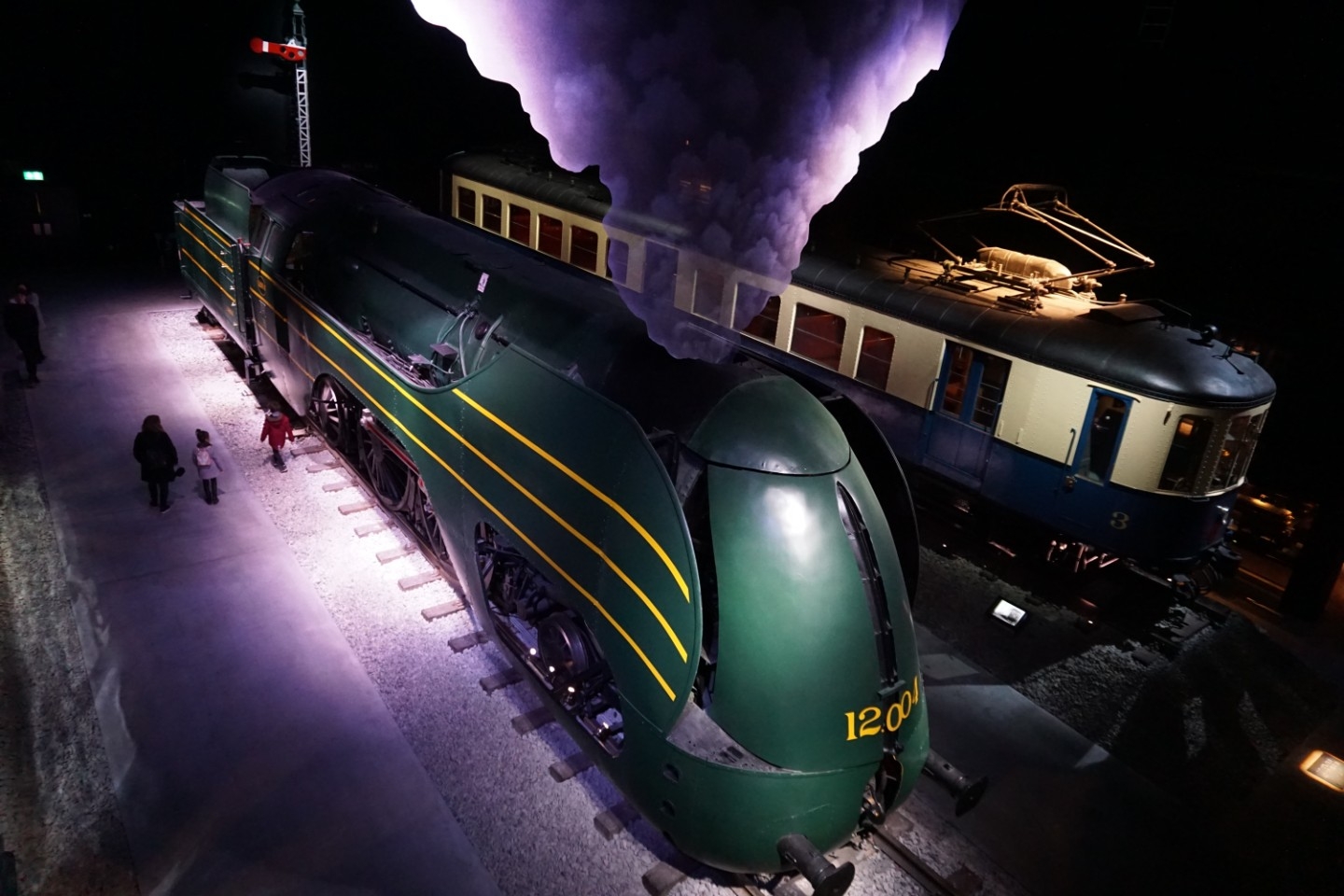 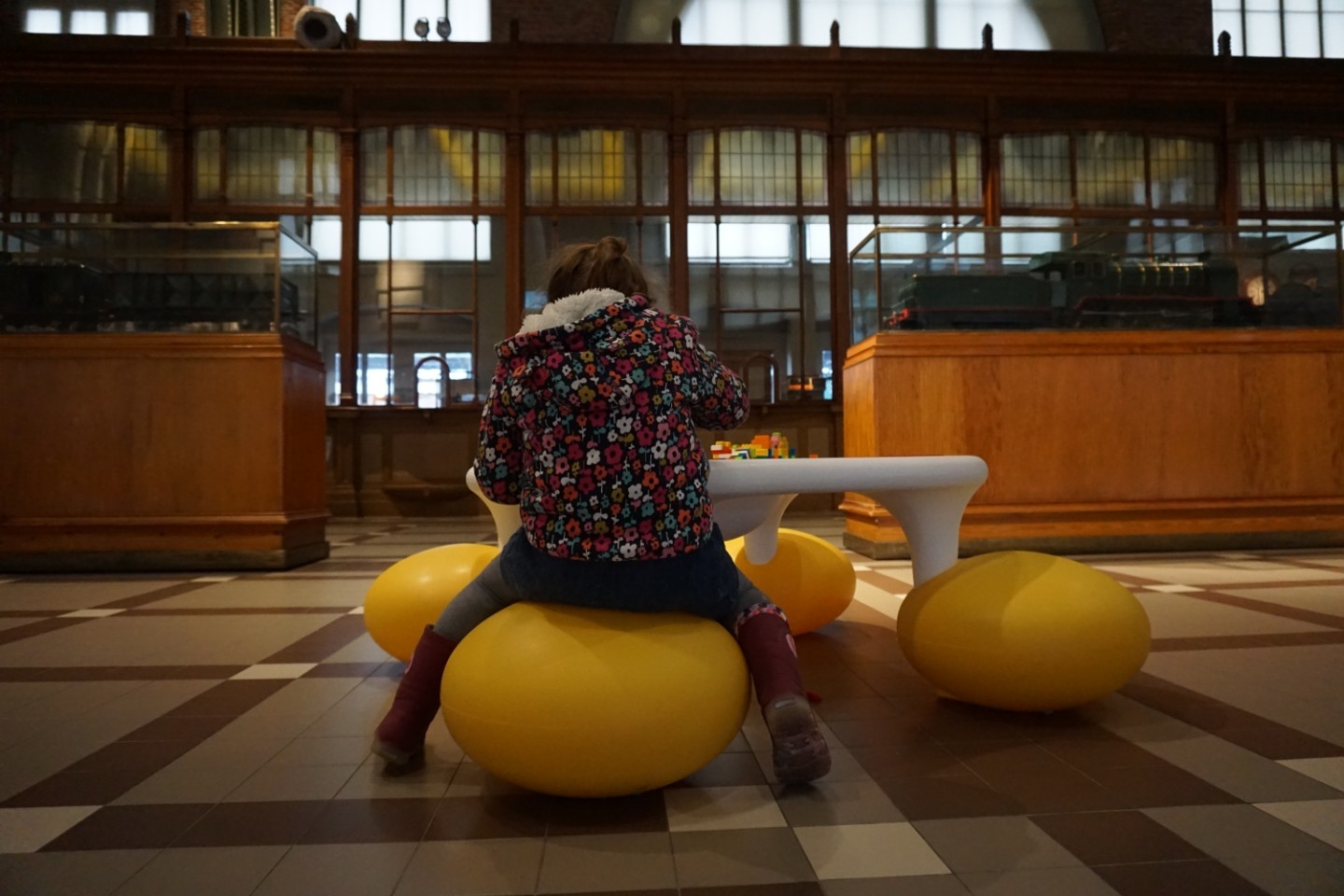 ‘More like an opera than a museum’? SOLD! Train World starts in a beautiful early 20th century train station, and takes you through four hangars of train history. The imaginative use of sound and lighting makes for a theatrical, often spell-binding experience. The children loved climbing into the old trains and engines, testing track materials, and the miniature train sets. The digital train driving experience was unfortunately too plagued with other kids for them to try. The icing on the cake was a LEGO trail with accompanying models, giant figures and LEGO play-stations.

For families, we also recommend the Musical Instrument Museum, the underground ruins of Cordenbourg Palace, and the largest dinosaur hall in Europe at the Museum of Natural Sciences. We visited all three during previous day-trips to Brussels. 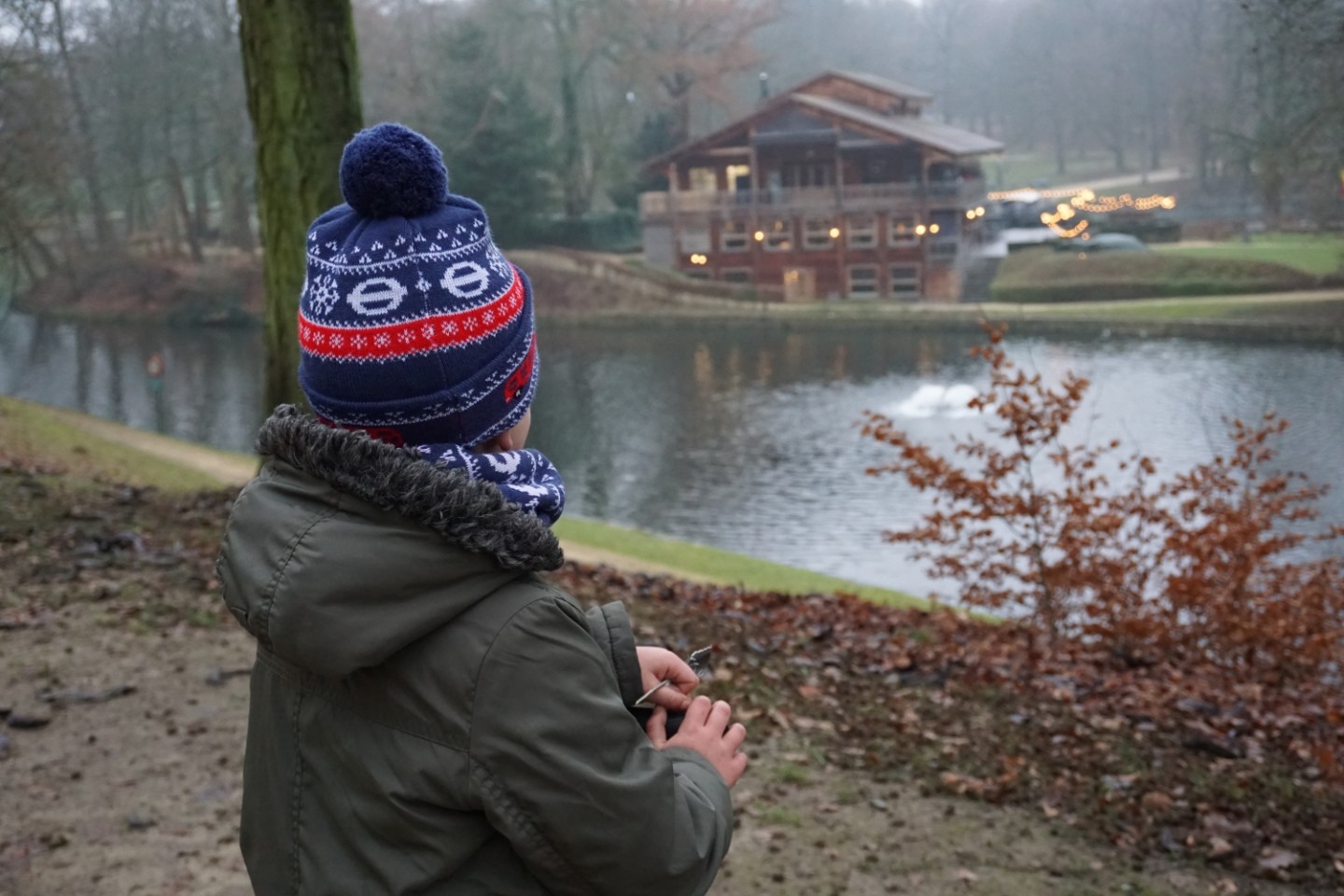 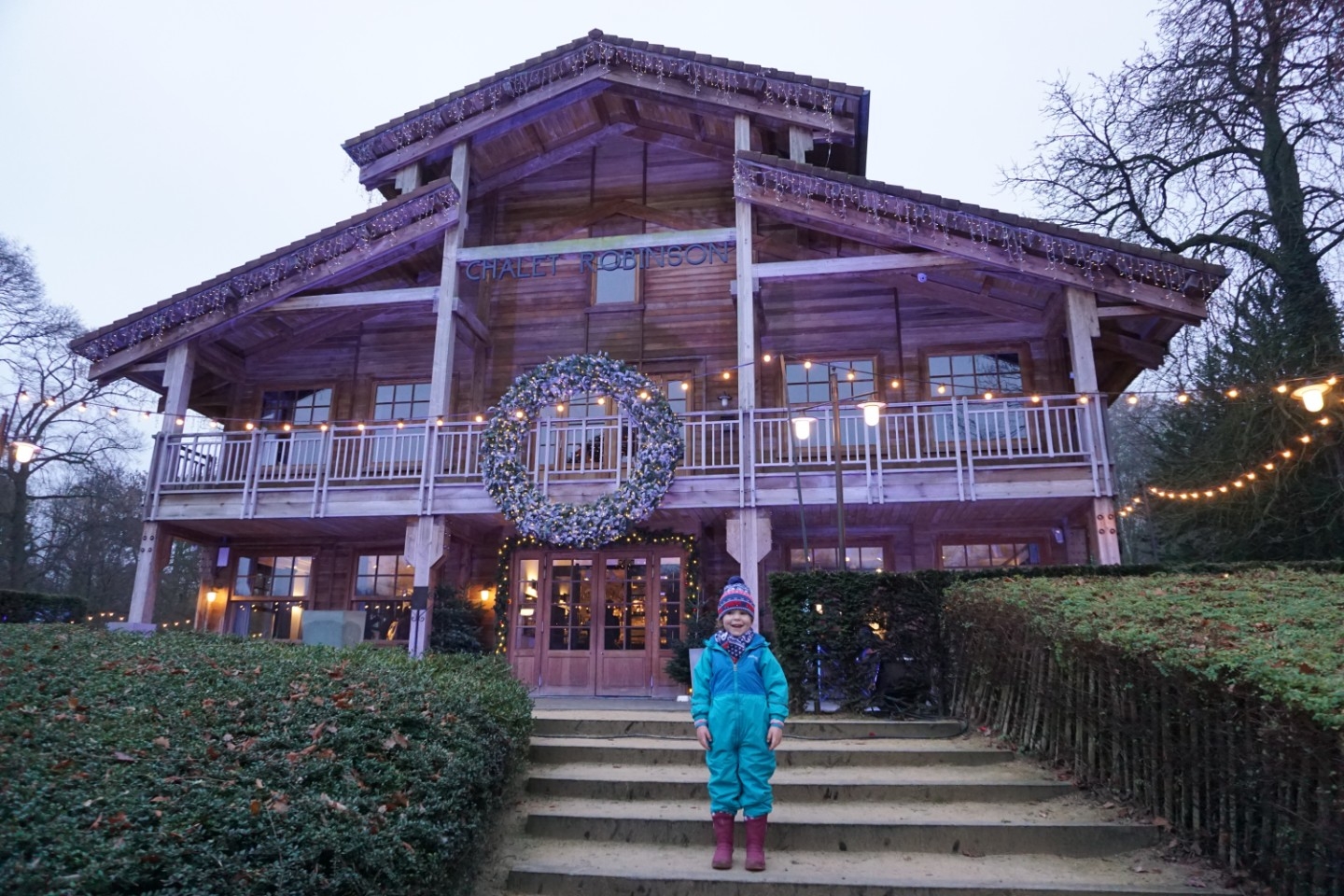 Bois de la Cambre is a 300 acre park made from ancient woodland. The best time to visit is on the weekend, when the smooth wide roads are closed to traffic – making it perfect for scooters. A walk around the lake gives elevated views of Chalet Robinson, an island restaurant. To get there, a couple of Euros gives you a return trip on the small pull boat ferry. The outside of Chalet Robinson is beautifully lit, whilst inside you’ll find a festive tree and a warming fire. The kids enjoyed giant waffles (pictured below) and making their own hot chocolates by stirring chocolate drops into warmed milk. During the return ferry the captain surprised the children with sweet treats from his treasure box. We highly recommend this trip, if you want a magical winter’s afternoon out. 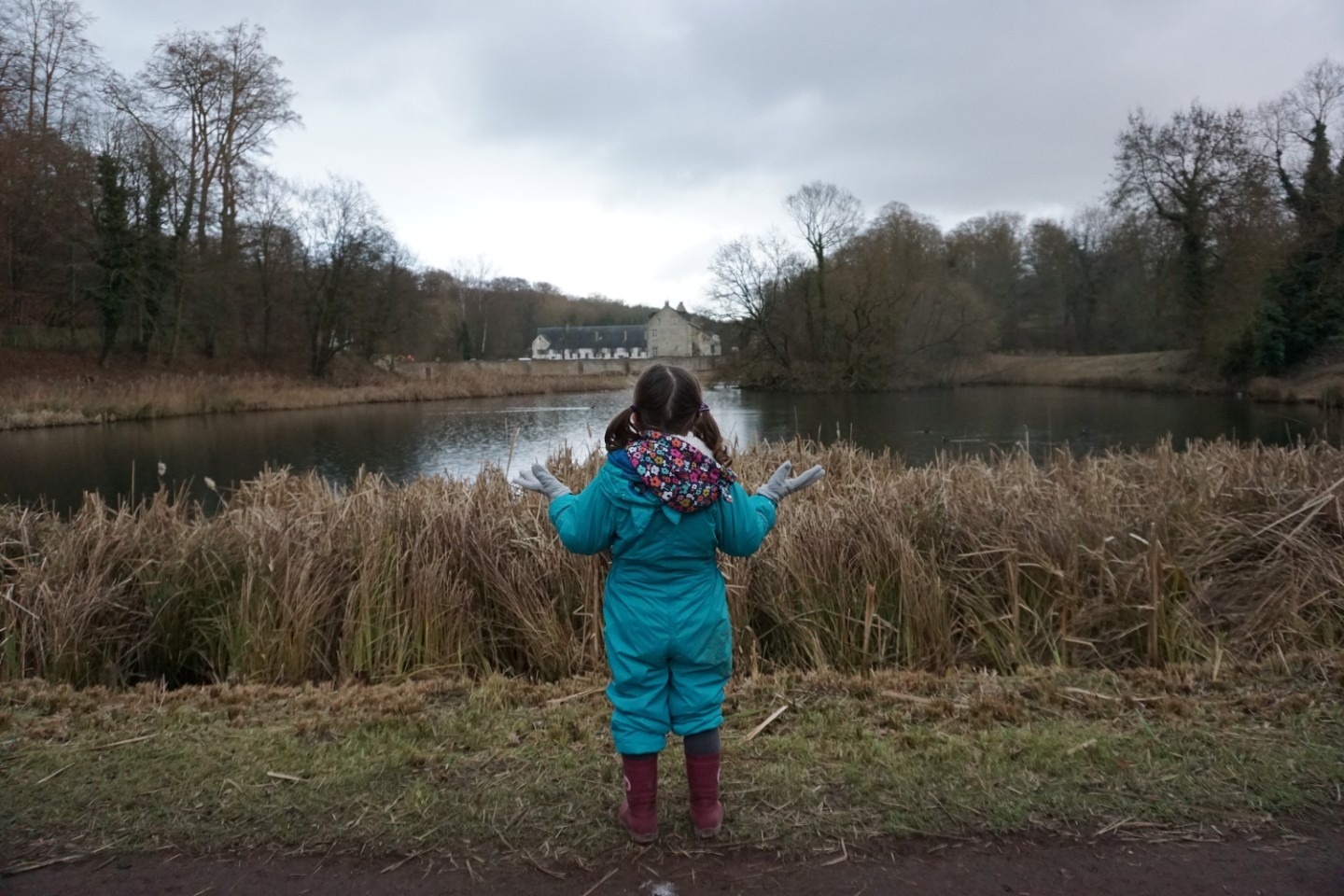 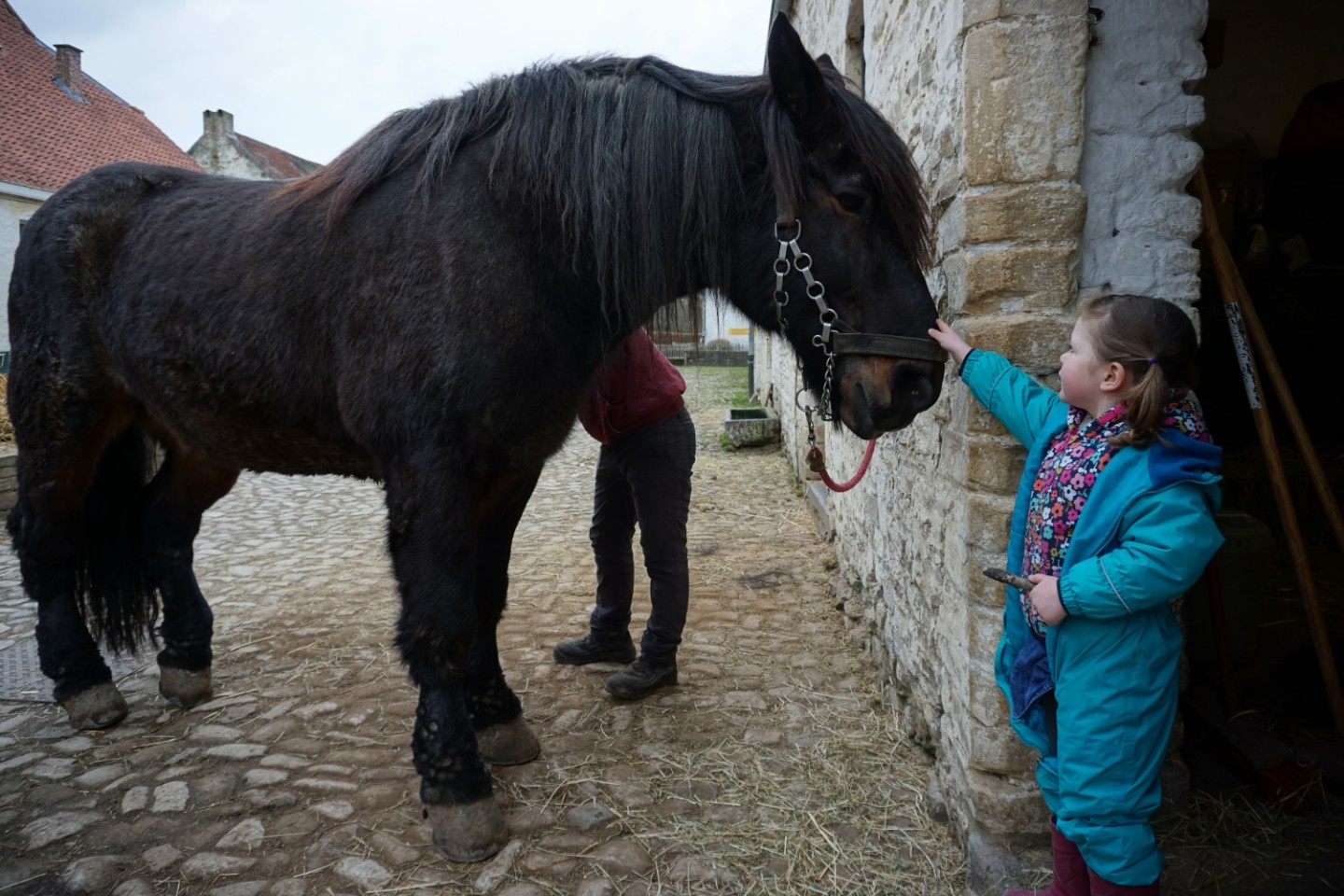 Take a walk through the beautiful Sonian Forest to the 14th century Abbaye du Rouge Cloître. Once a brewery for Monks, these historic buildings are now home to an arts centre, artists studios, cafe and – much to Museum Girl’s delight – a working farm. She watched the grooming of a horse, completely spell-bound, finally plucking up the courage to stroke it. Other farm animals include donkeys and chickens, which walked freely around our feet. Nestled nearby are three playgrounds, including an impressive pirate ship that’s even fun for older kids. It’s a charming place that we definitely hope to revisit.

I’m sure there’s more to Belgian cuisine than frites and waffles… But having hot, fresh street food that young children will happily eat is a bit of a godsend! Eating out can be expensive, at around €90 for brunch for a family of four.  So we usually brought our own packed lunches and bought treats whilst we were out. 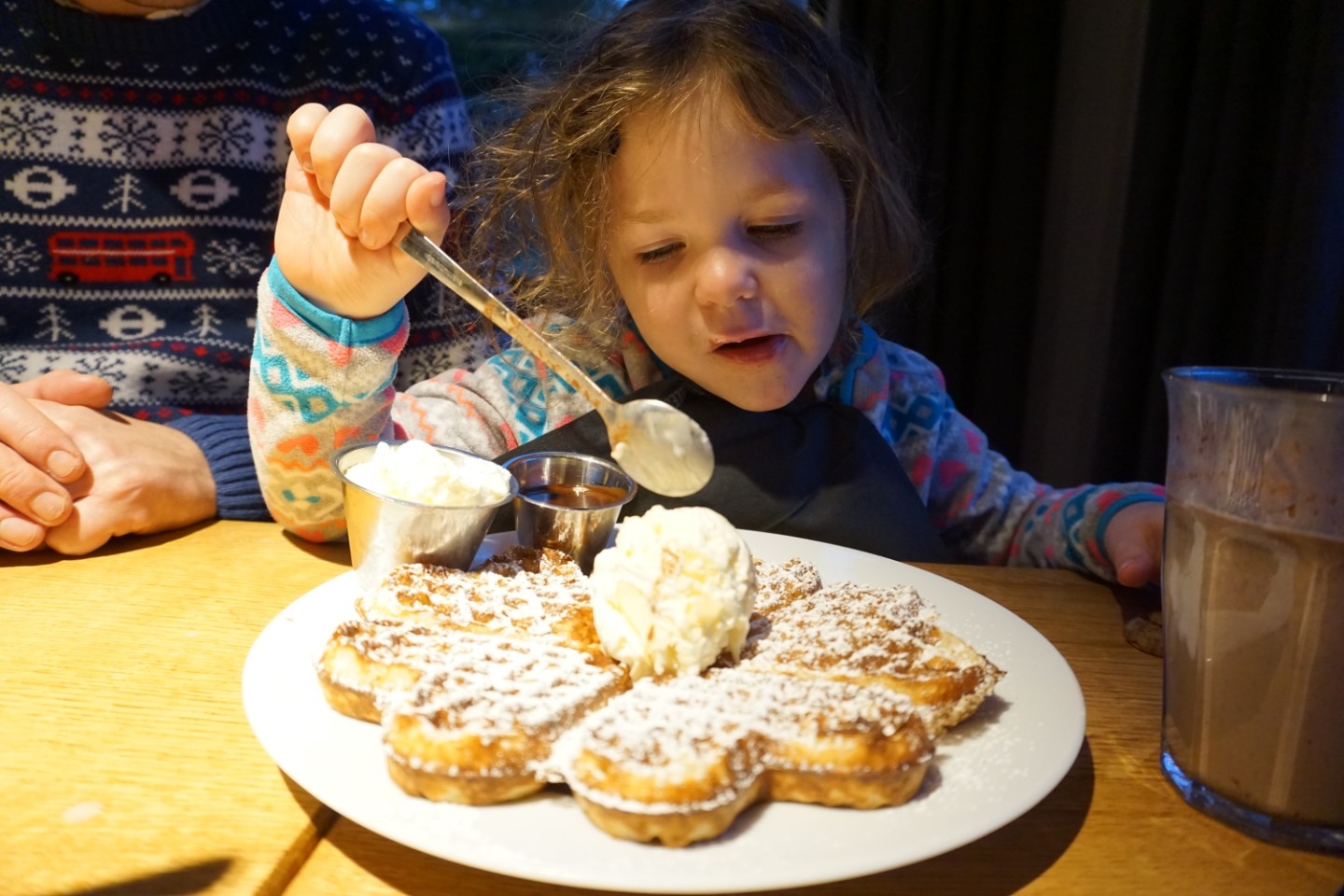 Our best all round food experience was at Chalet Robinson. Expect to pay around €8 for a waffle and €5 for a hot chocolate. 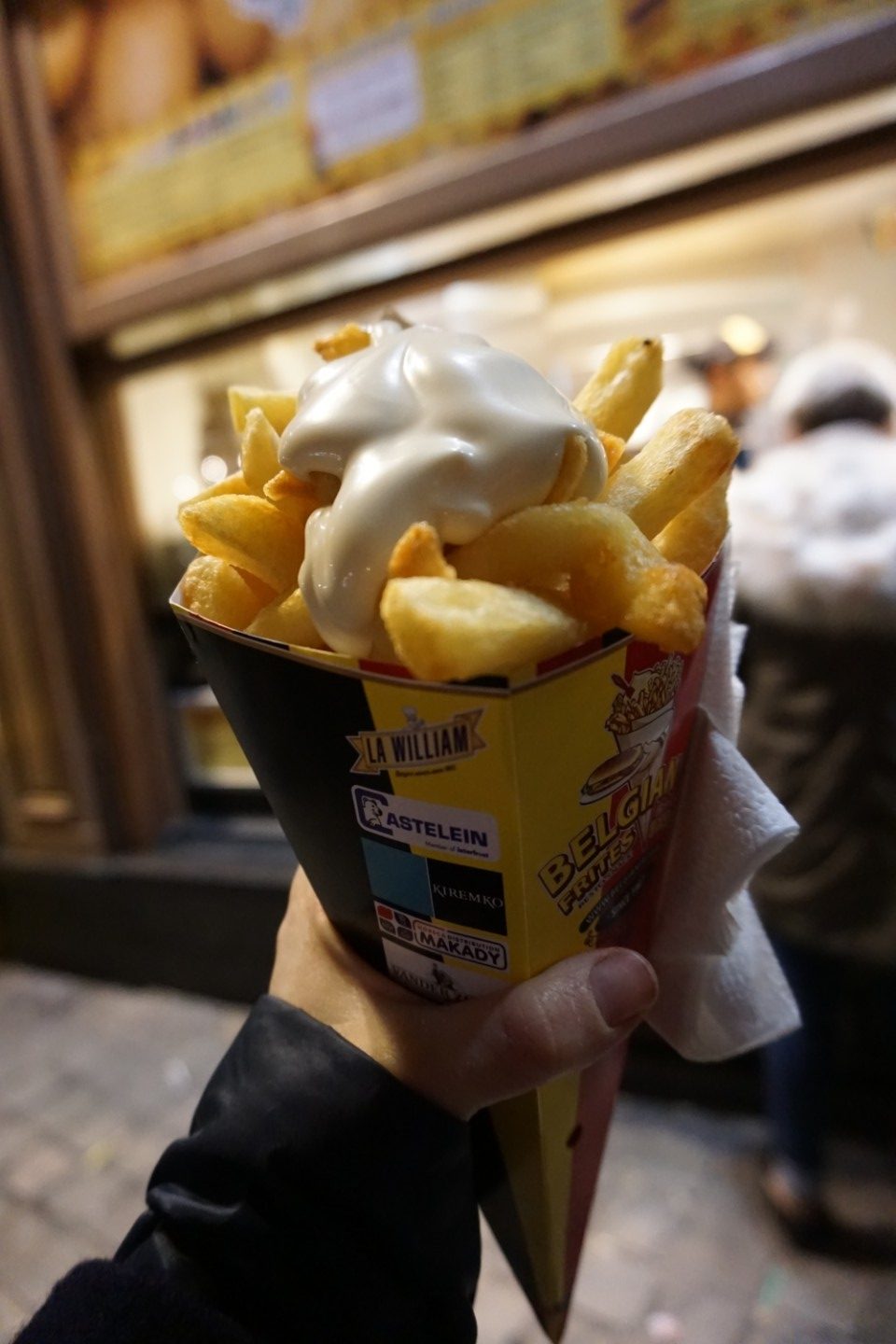 Our best frites were from Chez Papy, conveniently located just a few minutes walk from the Grand Place. Its near constant queue moves very quickly. 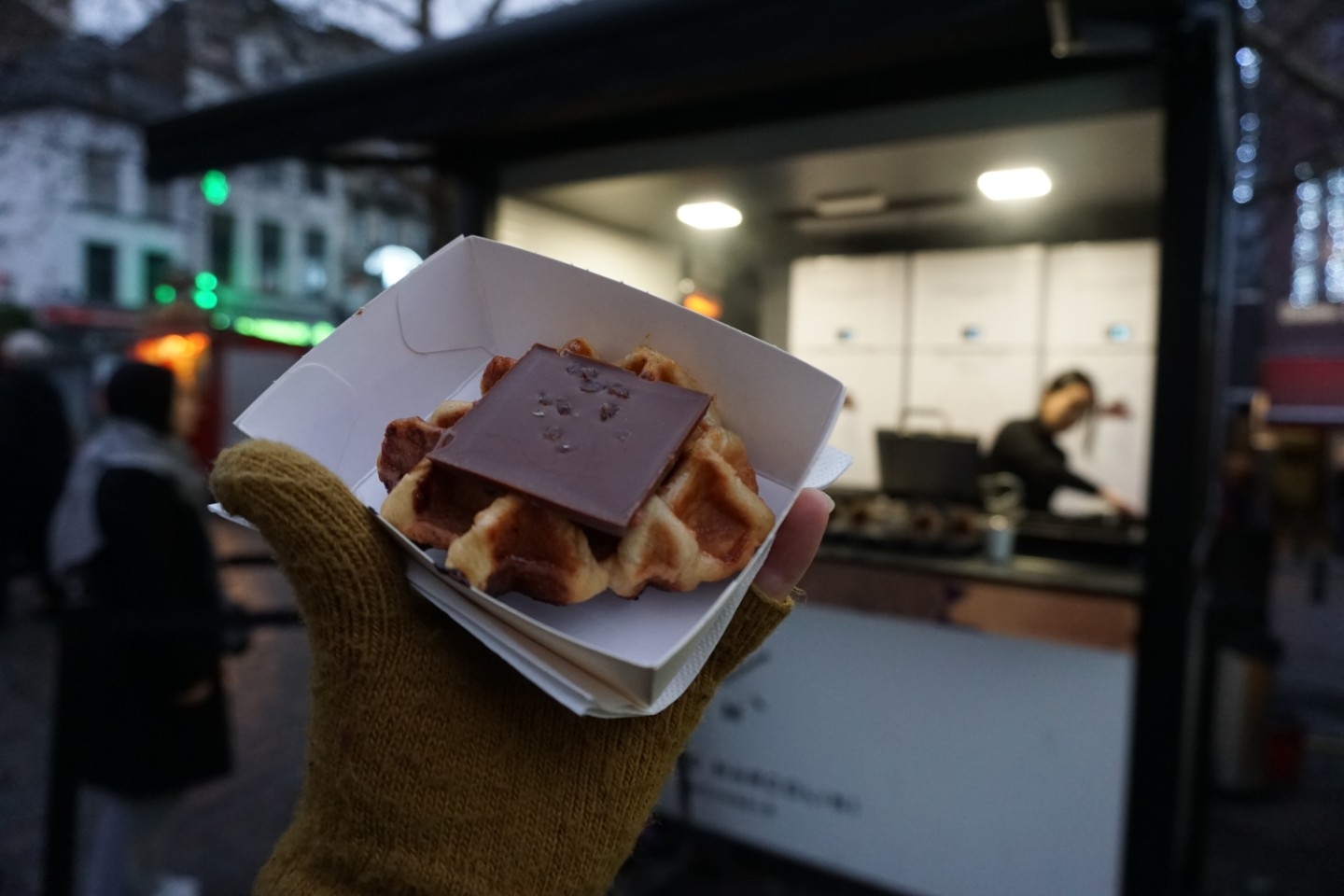 The best waffle we had was from a food stall at the Winter Market at Place Sainte-Catherine. The well cooked waffle was topped with your choice of fine Belgian chocolate. They were a little small and expensive at €5 each, but perfect for little mouths. 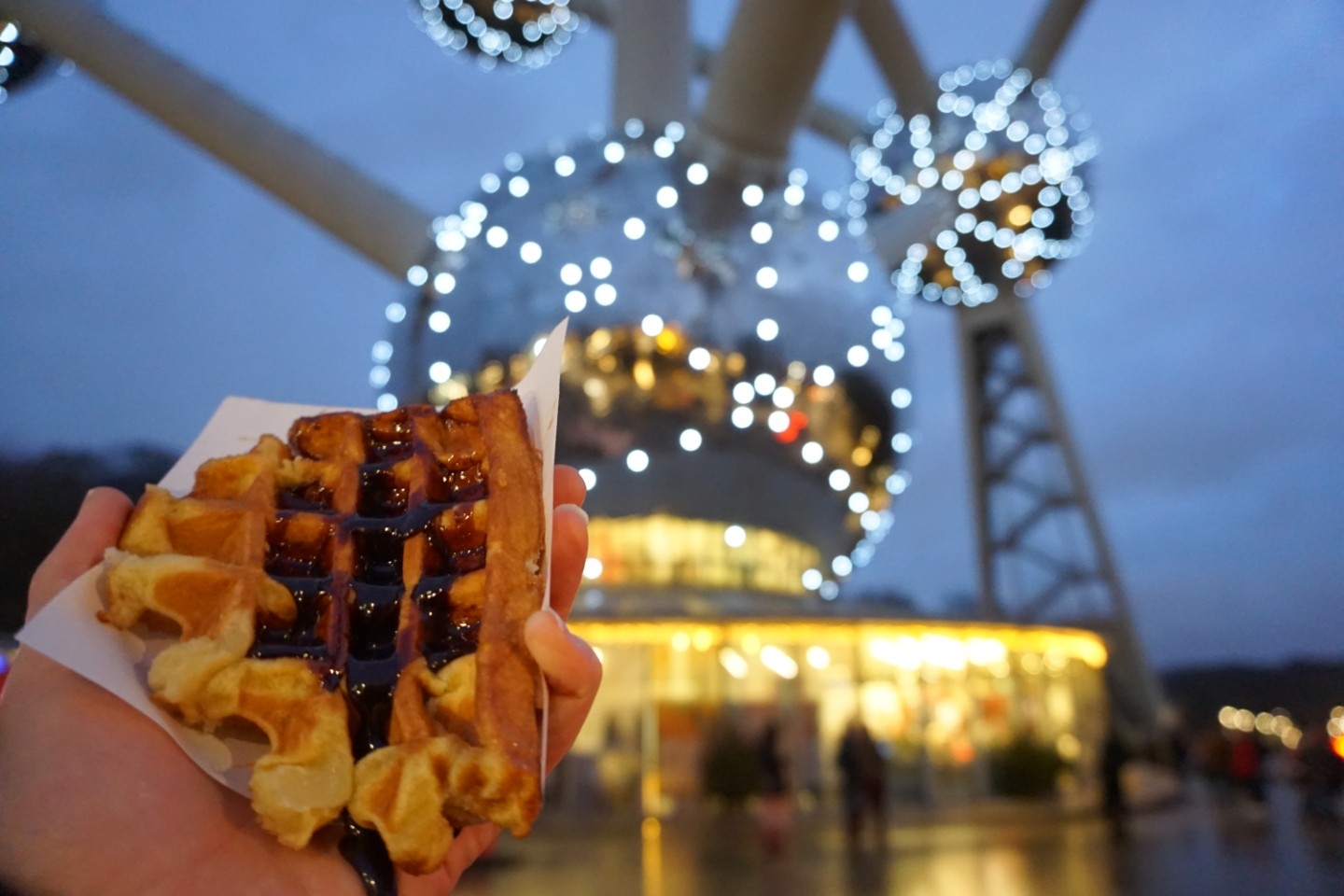 If you’re on a budget, keep an eye out for one of the many waffle vans. There were two outside the Atomium, selling plain sugar waffles at €2, or with chocolate sauce for €3. Ours were crispy on the outside but a little too doughy in the inside. Don’t bother with the chocolate sauce, they’re better plain. Trust me on this one. 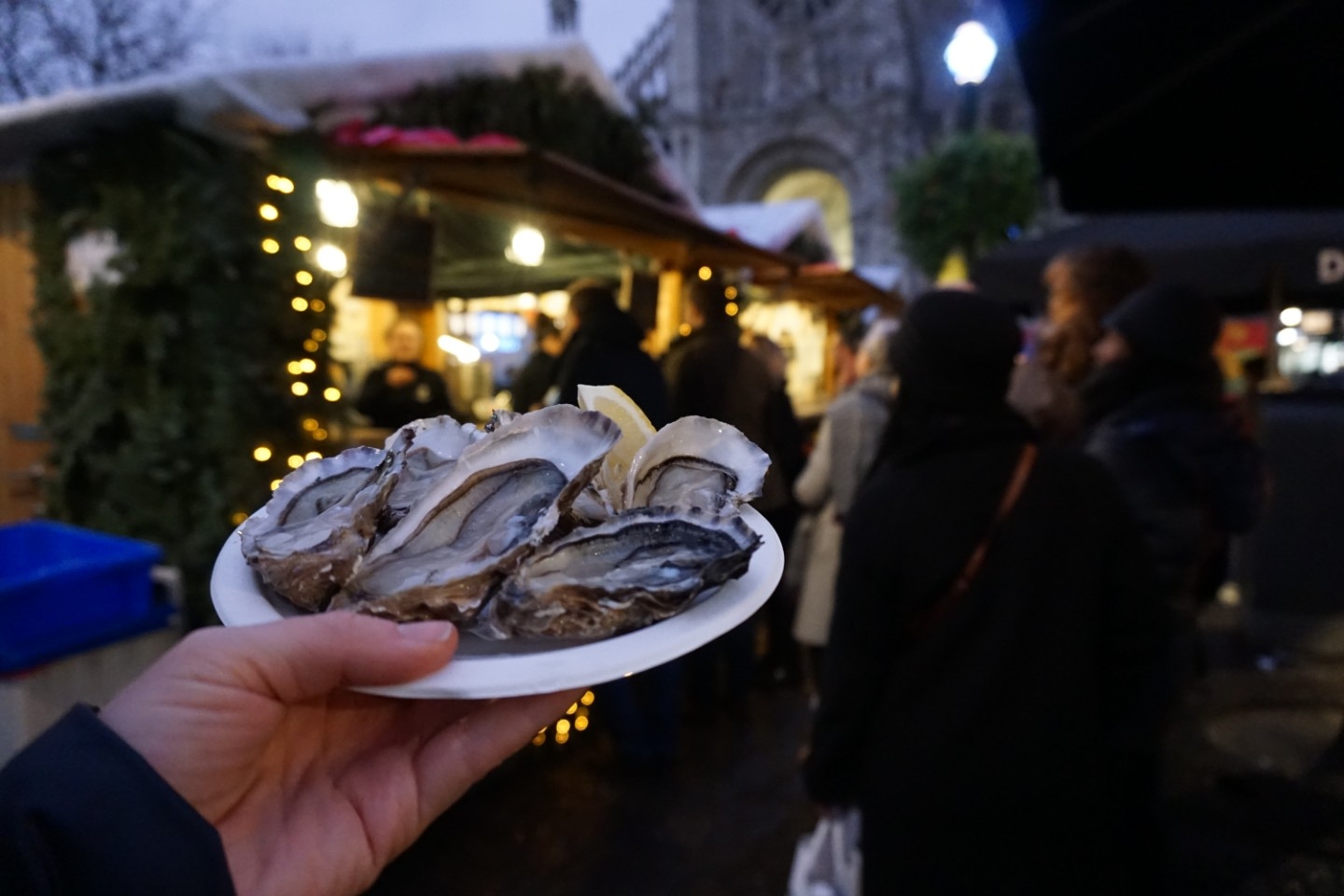 This is our second visit to Nordzee – Mer du Nord but definitely won’t be our last. Expect super fresh fish prepared to order. During the Winter Market they sell oysters and wine from a market stall in Place Sainte-Catherine. Grown up heaven.

Has this guide helped you plan a family visit to Brussels? Or do you have some recommendations to share? Let me know in the comments below.