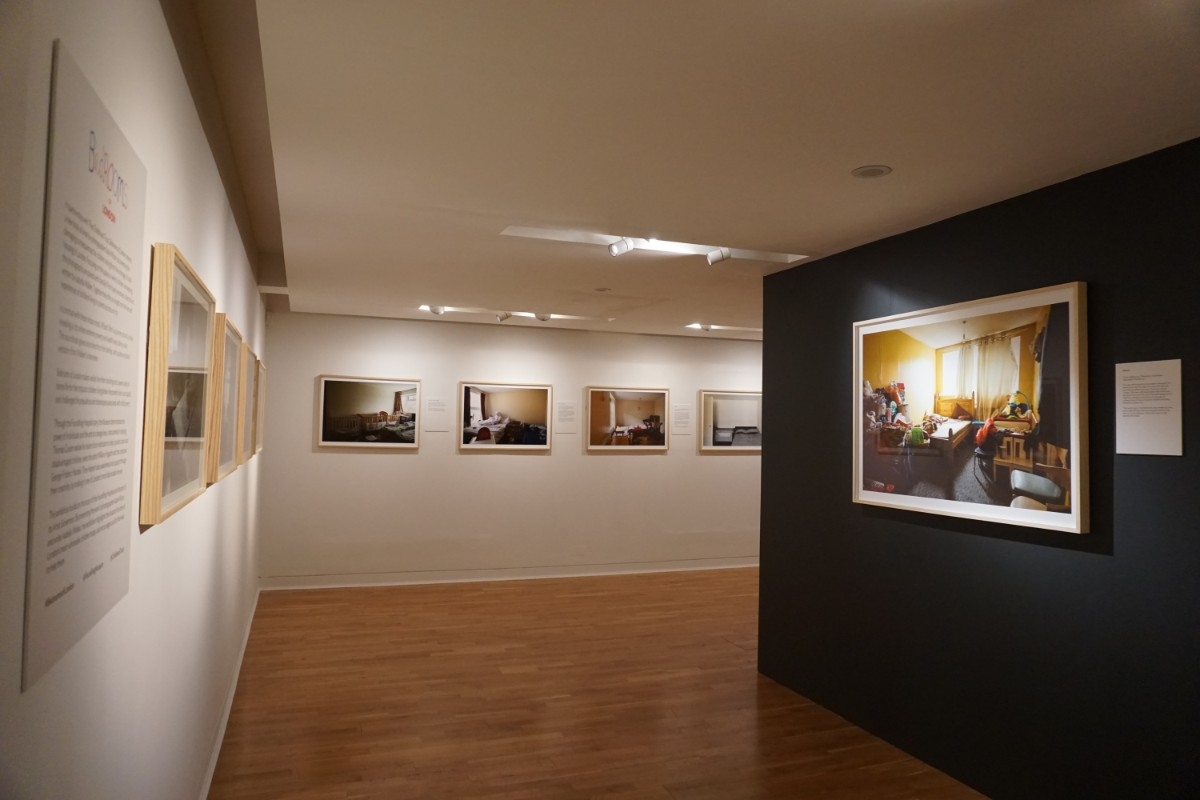 Some stories are so important that they demand to be told. But they are too difficult to articulate, stigma and shame silencing those who most need to be heard. The latest exhibition at the Foundling Museum tackles one such subject – child poverty and its relationship to poor quality housing. Bedrooms of London takes an unflinching look at the sleeping quarters of children living under the poverty line in our capital. The result is a powerful and poignant display. 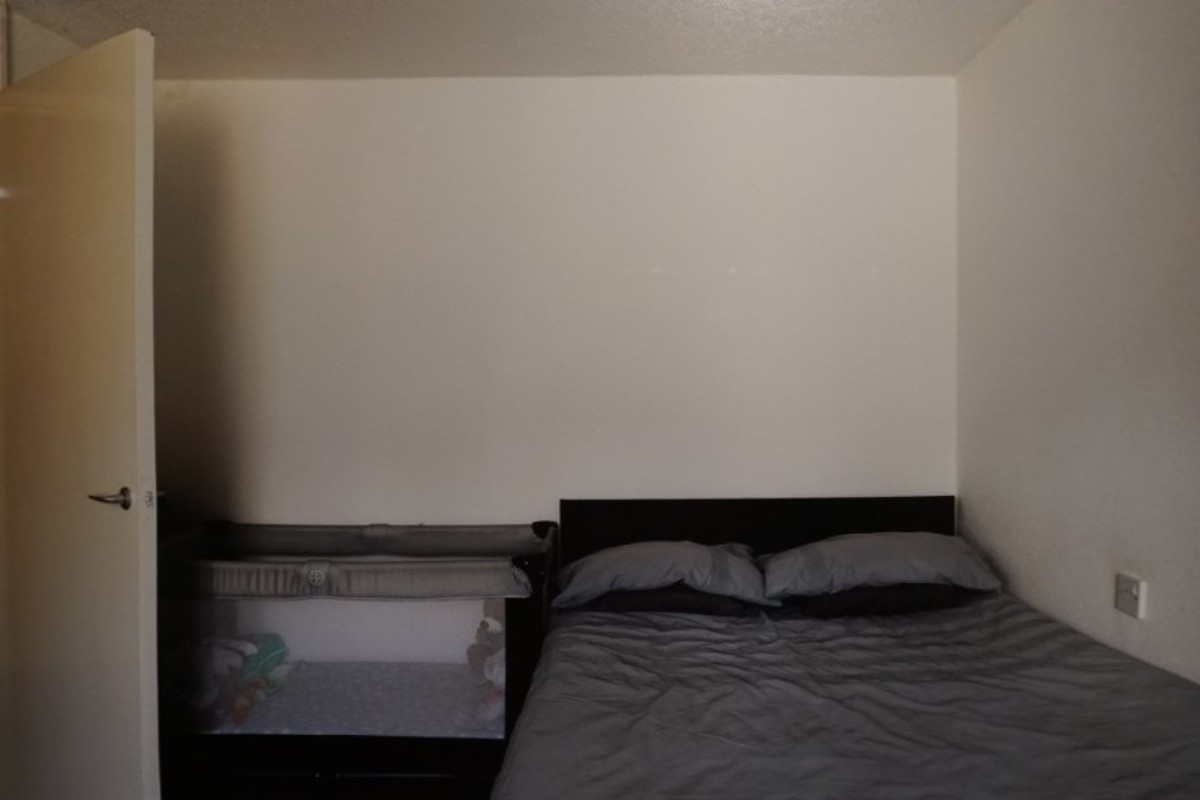 I am struck by the intimacy of these bedroom portraits, captured by photographer Katie Wilson. Even though there are no people in them, it feels as if they’ve stepped out for only a second. Sometimes it’s the door half ajar, the discoloured walls, or the wrinkled sheets which makes their presence powerfully felt. But it’s a perfectly made bed which unnerves me most. Kelly spends her time in their empty flat cleaning so that she doesn’t have to think. Trafficked as a domestic slave, her older son in Indonesia doesn’t speak to her, and she can’t afford to work until her younger son Miles is eligible for free childcare. 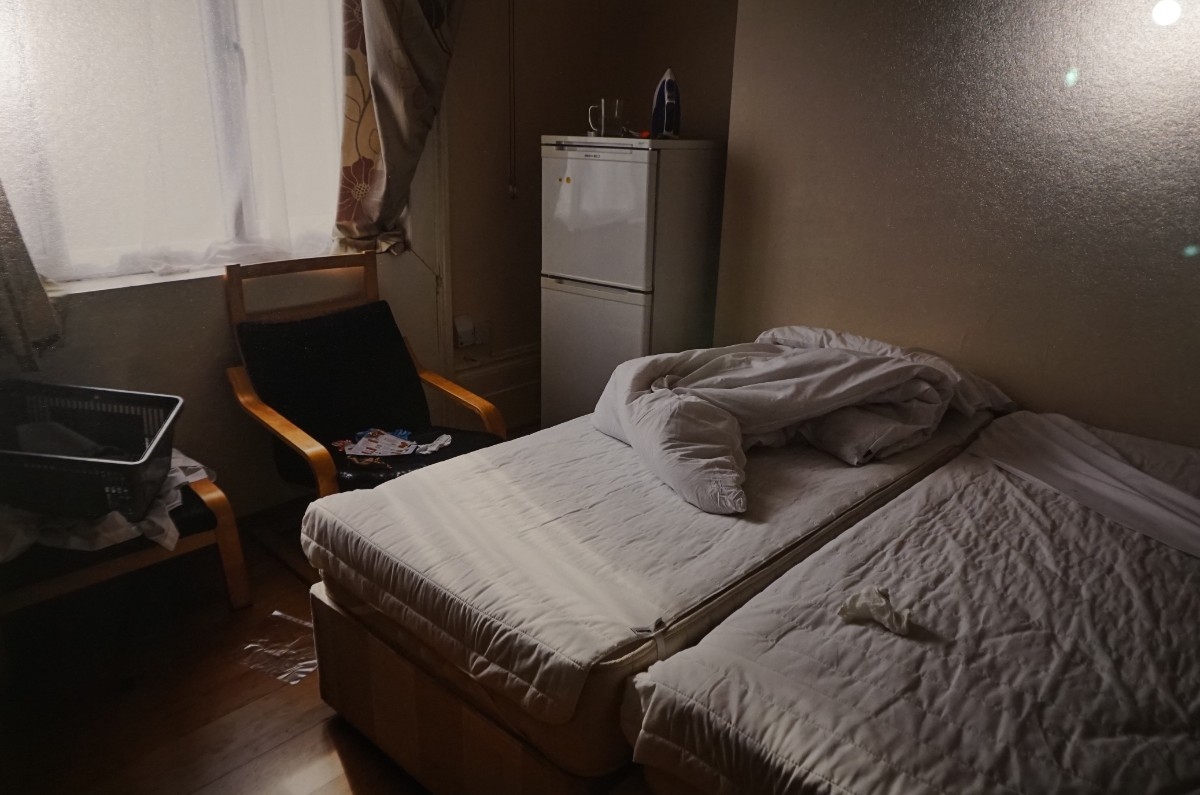 Never have I seen so few words say so much as in the accompanying captions. Writer Bella Walker delicately describes the families’ circumstances, avoiding the easy trap of emotional embroidery. As I read, certain simple phrases catch – they sound to me like echoes of these children’s voices. For example, Annyka and Ruhel can’t go back to their dad’s because he ‘was hurting their mum’. The childlike simplicity makes the words even more powerful. 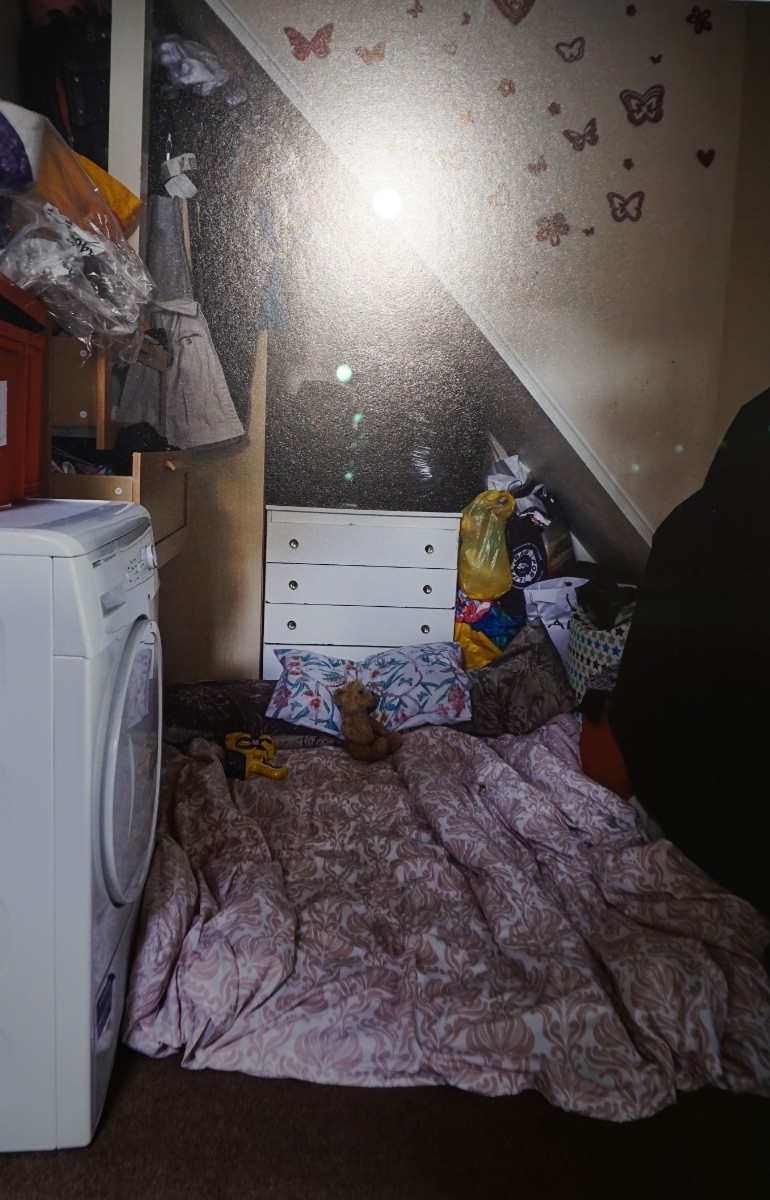 ‘Bedrooms’ is a very loose term, at least in this exhibition. Preeti, Amir and Priya sleep on a mattress on the floor in the basement. It takes over half her income and housing benefit to pay their rent to a private landlord. Financial stresses have made their mum depressed. 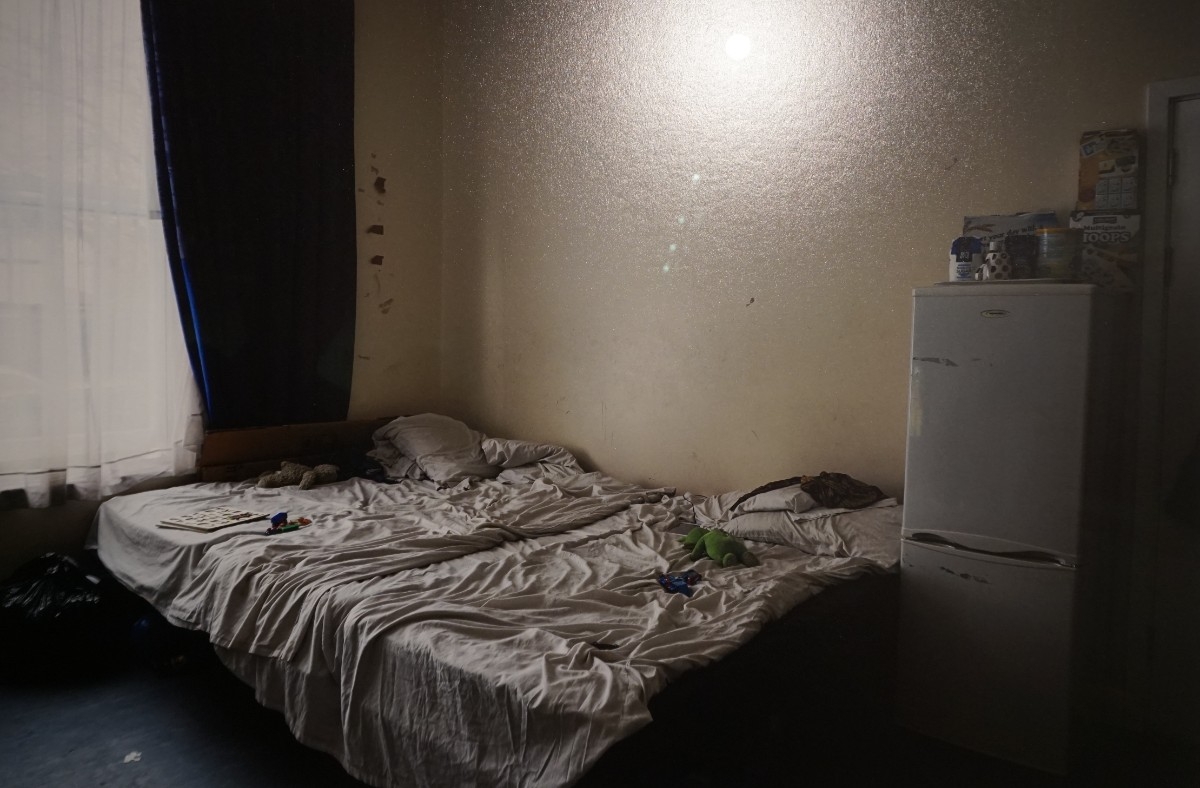 Some of these children have no escape from their sparse quarters – like four year old Christopher and his two year old brother Simon, who are always at home. Their mother Sainey was trafficked her from Ghana by her relatives as a domestic slave. Now free, she is in debt and can’t afford clothes for her growing children. I can’t see the whole of the room, but judging by the fridge-freezer awkwardly wedged between the bed and the door, I imagine it is small. 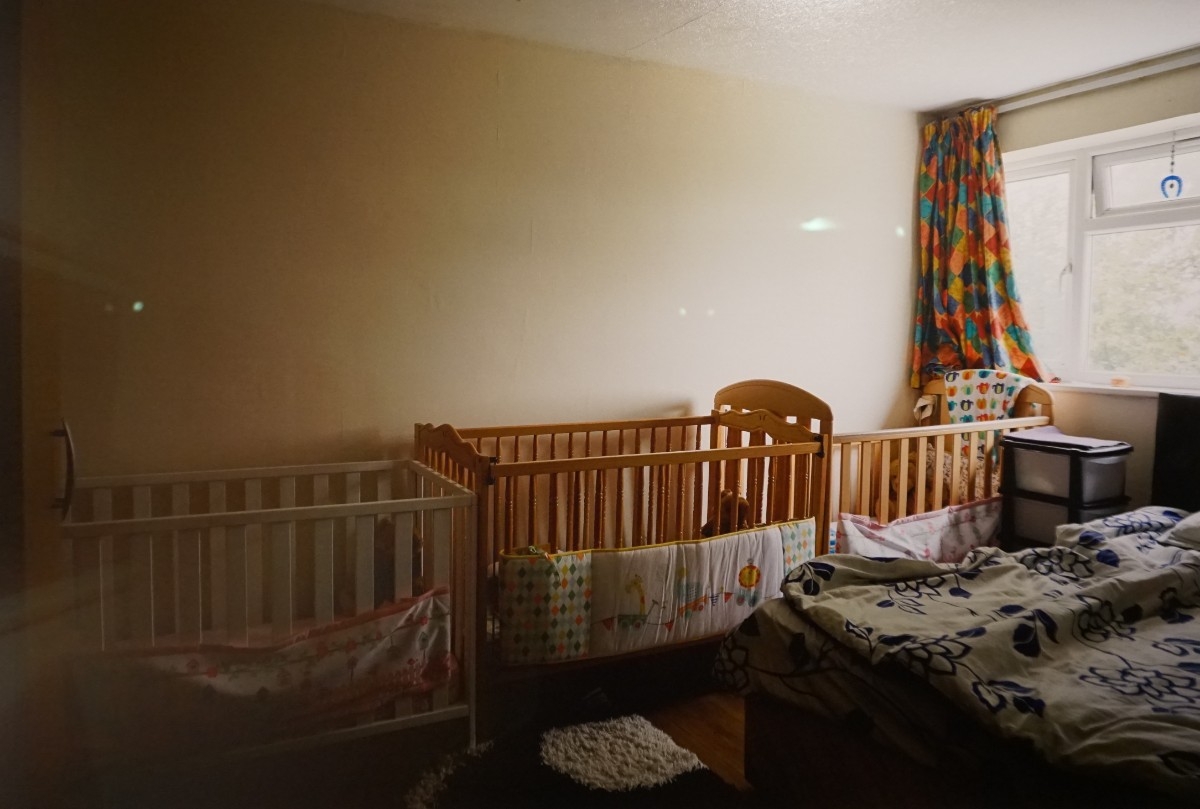 Many of these families are trapped in poverty due to low wages and high rents. A sobering statistic is that one in three households in England are only one paycheck away from poverty. A single misfortune can have huge consequences. The parents of triplets Darshna, Gita and Dipesh have three jobs between them – at day their dad works as a postman, and at nights in a restaurant. But their hard-earned savings were tragically destroyed in a house fire, along with everything else. 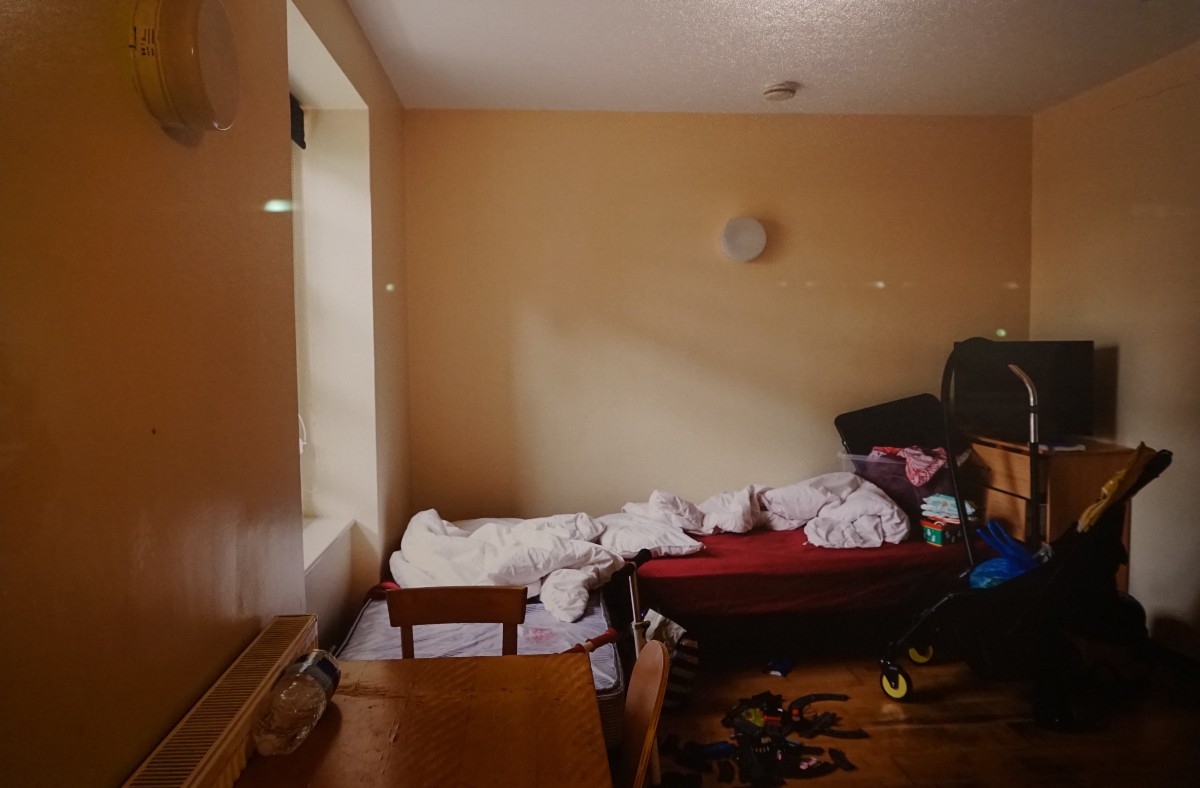 Some of these children have complex needs, no doubt made worse by their difficult living conditions. Four-year-old Edward has delayed development and cries all the time. They have been rehoused several times, once living with someone from church was turned aggressive towards the boy. On the floor is his only toy, a train set given by a charity. They rely on foodbanks to eat, and it upsets his mum that she can’t even afford to buy him an apple some weeks. ‘I don’t want much’ she says, ‘just a bit more’. 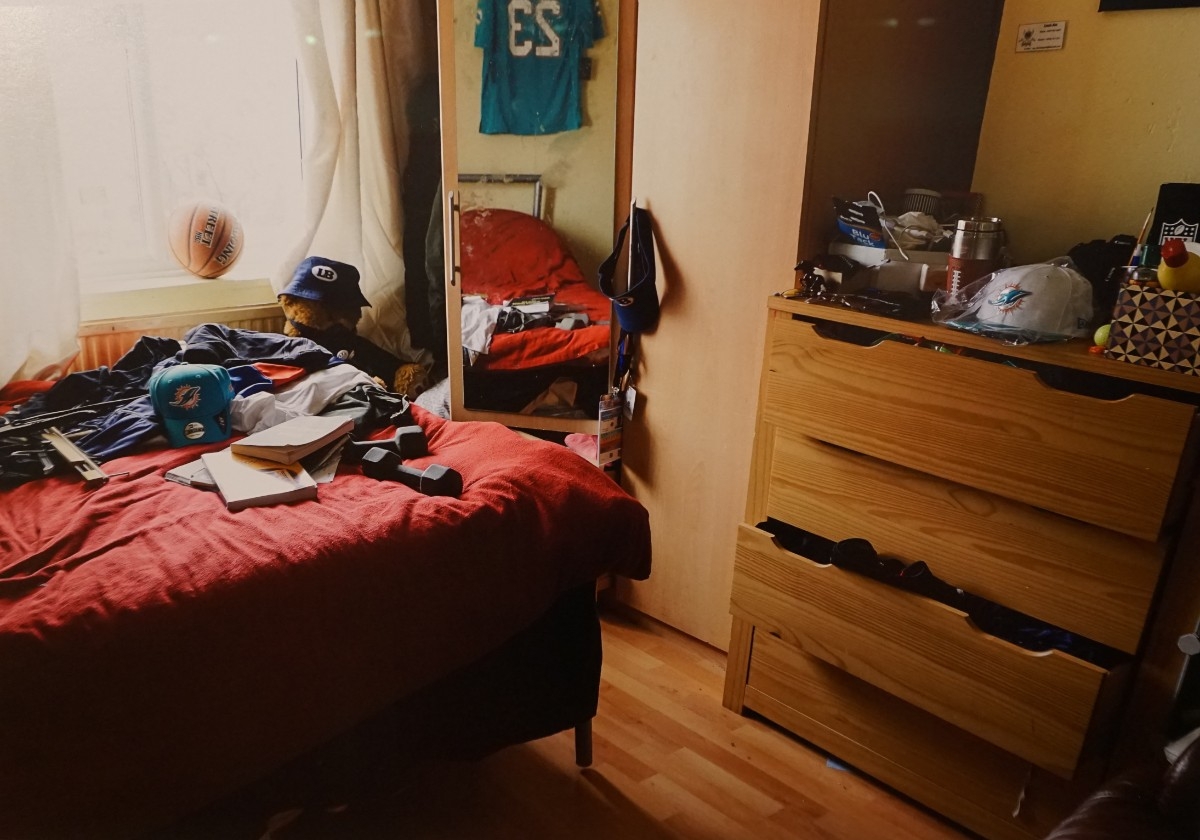 There are moments of hope in this exhibition, glimpses of how even one person can make a difference. Two-year-old Michael’s mum Rose is agoraphobic, and his clubfoot and brace make it difficult for her to take him out. Once a week a charity volunteer accompanies them to the supermarket and a playgroup. The last child we meet is Fabrice. Once bullied at school, he was picked for tuition by an educational charity and is now studying at a top university. A talented American football player, he has won a scholarship to a college in the United States.

No matter how desperate a child’s situation, with the right help, their lives can be transformed. 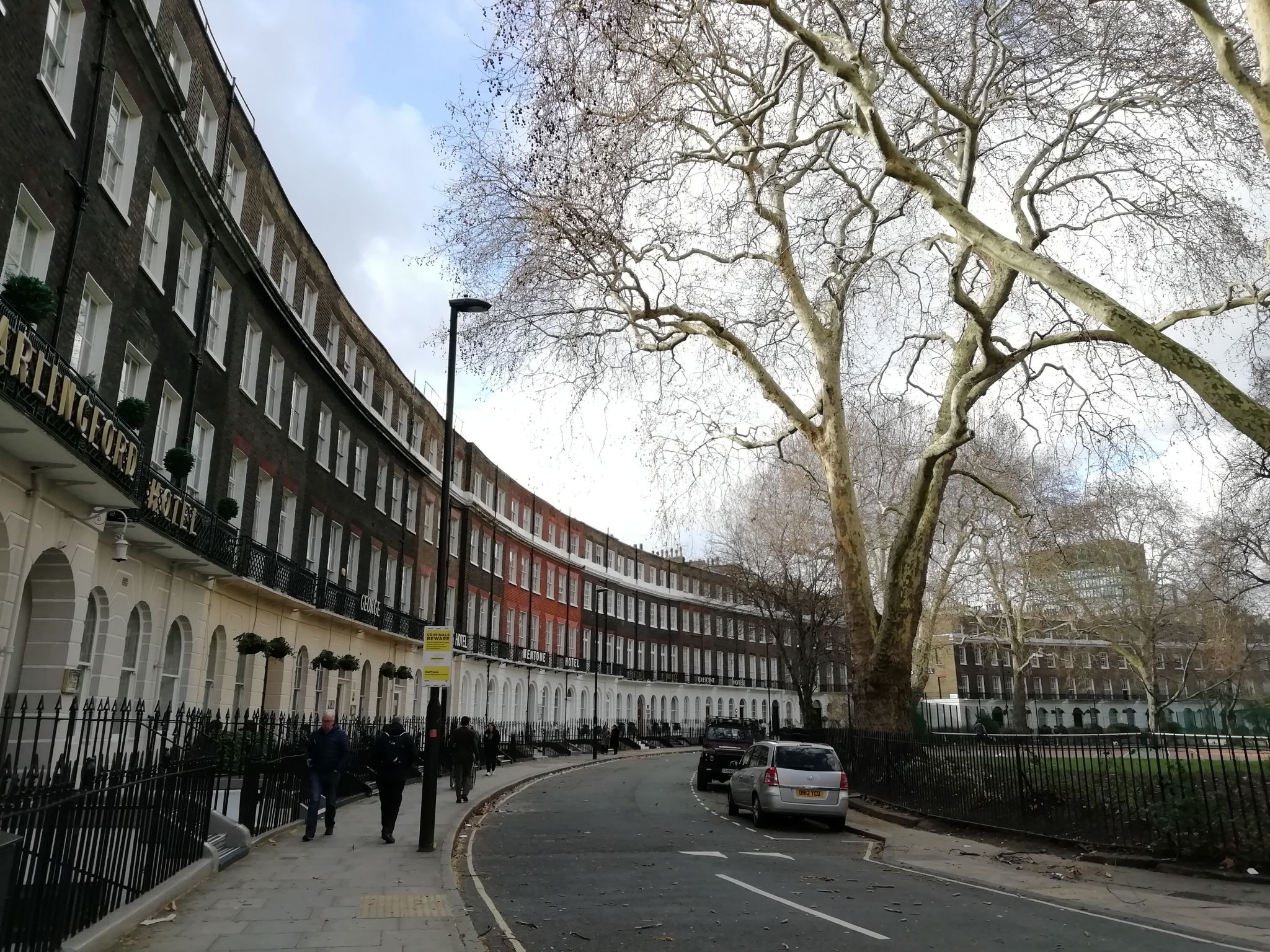 On the way home I pass a deceptively grand Georgian curved street, tucked just behind the Euston Road. I know this place well, having spent a birthday in a room on this street, in a homeless hostel. I turned 25, and the next day, my daughter turned two. We didn’t celebrate either birthday that year. I remember little apart from several sleepless nights in an overheated bedroom with tall Georgian windows, my little one curled up next to me, whilst I was terrified by the sound of doors continually opening and closing. During the day, I was busy, ferrying my daughter back and forth to the childminders, a two hour round trip.  I attended university lectures, in a desperate pretence that my life wasn’t falling apart. But at night I went to bed hungry as I was too scared to leave the room to use the microwave in the kitchenette opposite. Most of the rest of the tenants I met over the soulless breakfast were male, childless, and had been homeless in some form for many years. I watched two people each eat an entire loaf of value bread one morning. I knew that this would probably be their only meal for the day. I felt like I didn’t belong, but there was nowhere else for me to go.

I didn’t think homelessness would ever happen to me. I am an intelligent, resourceful woman. I worked and paid rent in London for years, both before and during university, without and with a child. I knew first-hand how bad the private rental market could be. Once, my landlord knocked on my door to tell me he could set fire to the flat with me and my child in it. The smoke-damaged ceilings were, he insinuated, proof he had done so before. The reason? I asked for a second set of keys, just a little too persistently. There was also that landlord who was well known for his sexual advances on female tenants. So when I suddenly split from my daughter’s dad, finding a safe home was my priority. With a toddler and no savings, Citizens Advice outlined my meagre options. And that’s how I found myself marking a quarter of a century in this joyless hostel bedroom.

This exhibition brings homes how fortunate we were. After a week, we were offered temporary accommodation, where I anxiously awaited judgement from the council to see whether they considered us as intentionally or unintentionally homeless. ‘Un’ – I doubt two letters will ever again have so much power to determine my future. I can’t confide in you the reasons they decided we were not deliberately homeless. But the relief was enormous – I was now eligible to remain in our temporary home, until I was offered a permanent place. 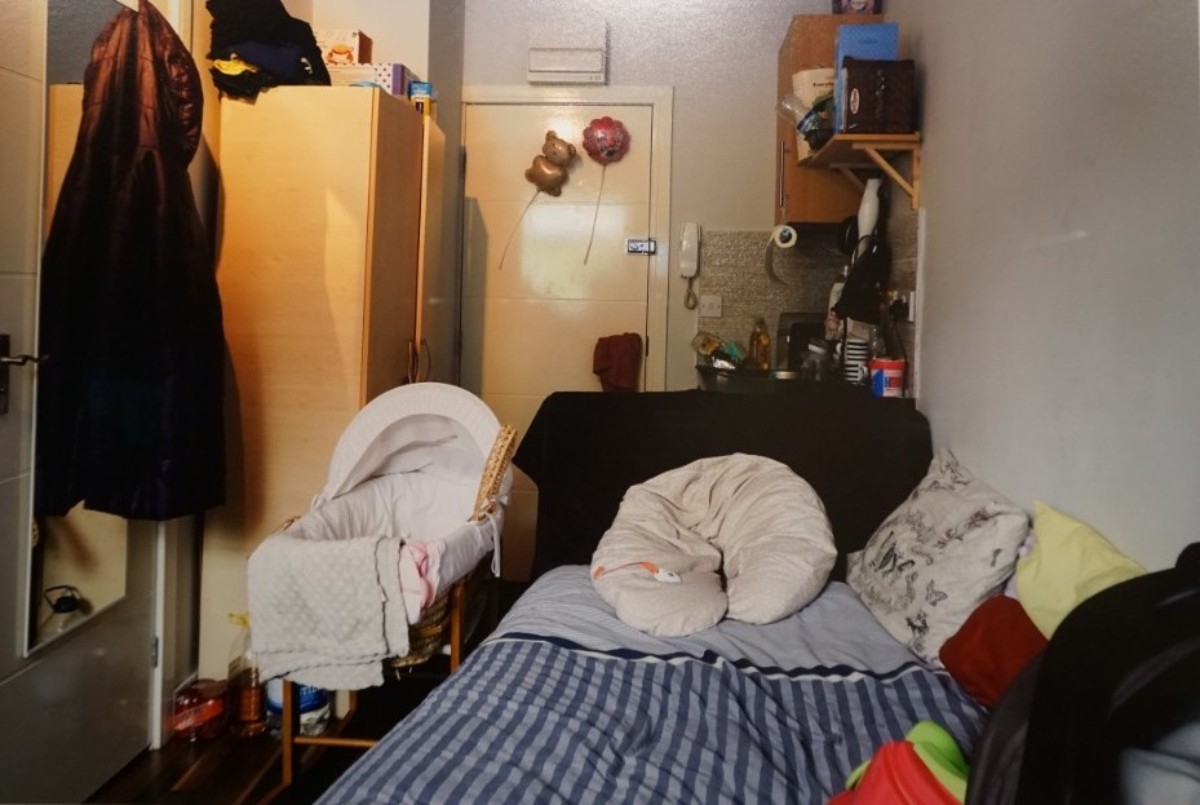 I know without doubt that having recourse to safe, stable and affordable housing changed, no, saved my life. We could shut our front door with a sigh of relief. I didn’t have to shove towels under my bedroom door to stop my neighbour’s drug smoke from coming in, as Amelie has to for her baby Jane. The flat was large enough that I could get some physical space from my daughter after I put her to bed at night. They were decent bedrooms – I didn’t have to resort a mattress in a basement. Our housing was stable, unlike Annyka and Ruhel who are about to be evicted from their one room. Whatever my worries, housing was not one of them. It is thanks to affordable and secure housing that I could finish my studies, unlike Mai in her kitchen bedroom, who has had to give up her PhD. 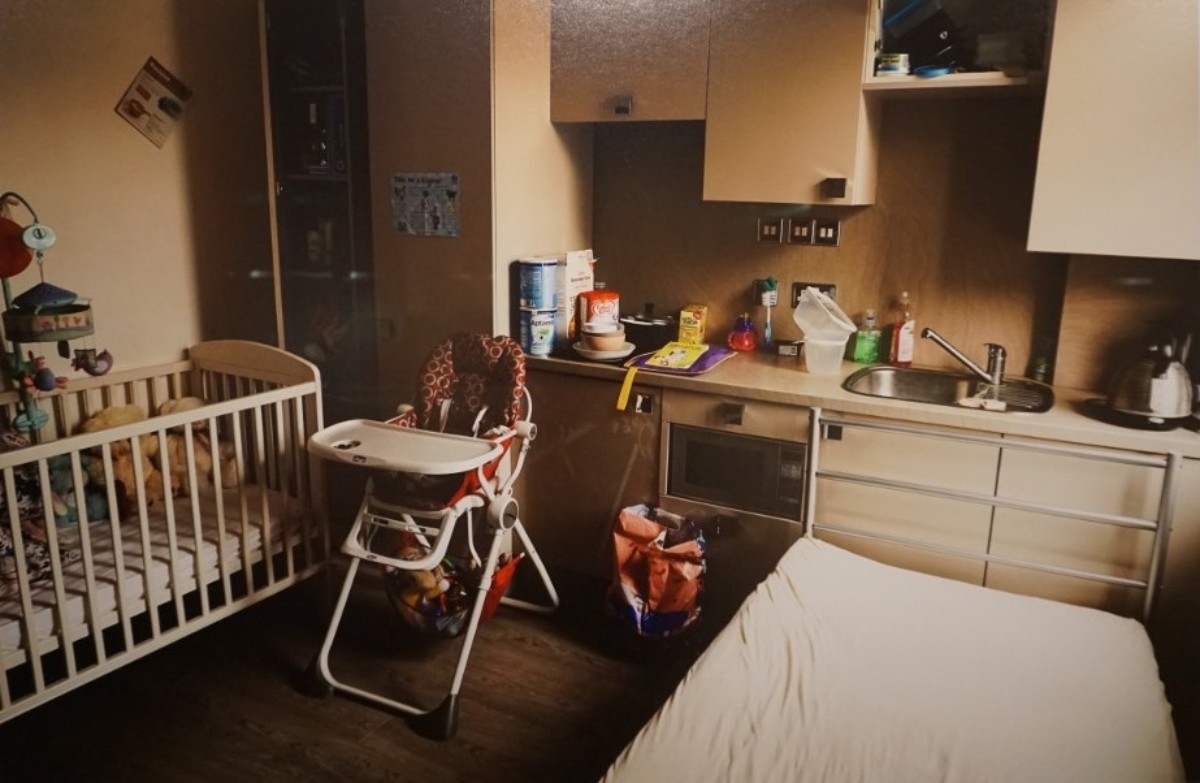 I am now a homeowner – not despite being homeless but because of it, because decent social housing allowed me to get back on my feet and turn my life around. I only wish this opportunity was available to everyone who needed it – every single family in this exhibition and those countless more trapped in poverty due to their housing situation.

If you’ve got this far, thank you from the bottom of the heart. It has taken me years to articulate this experience, to feel I can share it, despite no longer being homeless. Feeling heard is a powerful and empowering thing.

Now, please, go listen to the stories told in Bedrooms of London. These people deserve to be listened to, much more than I do. I am in awe of their bravery, letting their most intimate space – their children’s bedrooms – be photographed and shared in all their insufficiency. As one mother said, ‘If people see this, if people understand this, then maybe things will change.’ 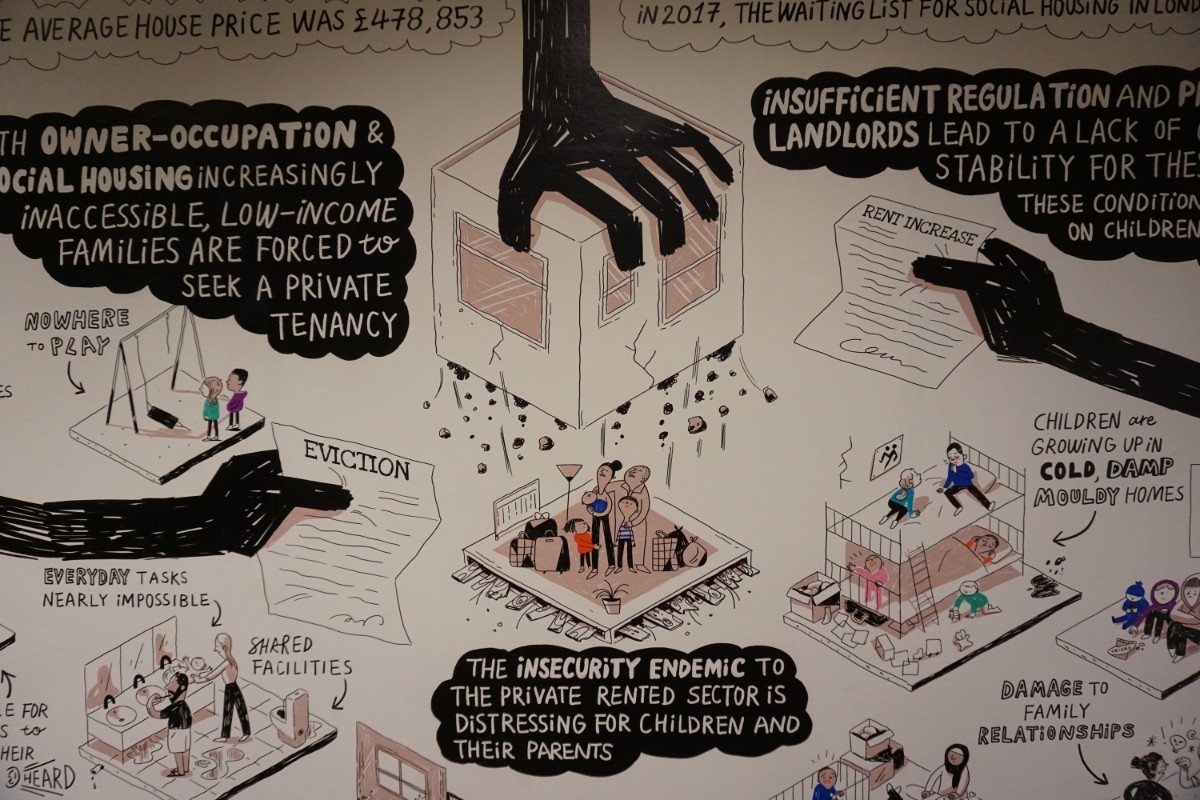 Bedrooms of London runs until 5 May 2019 at the the Foundling Museum. Open daily, except Mondays.
Adults £11, Concessions £8.50, Children and adults aged 21 and under go FREE.
For more information visit their website: https://foundlingmuseum.org.uk/

The accompanying ‘Bedrooms of London’ report by the Childhood Trust can be read in full here: https://view.publitas.com/the-childhood-trust/bedrooms-of-london-report/page/1