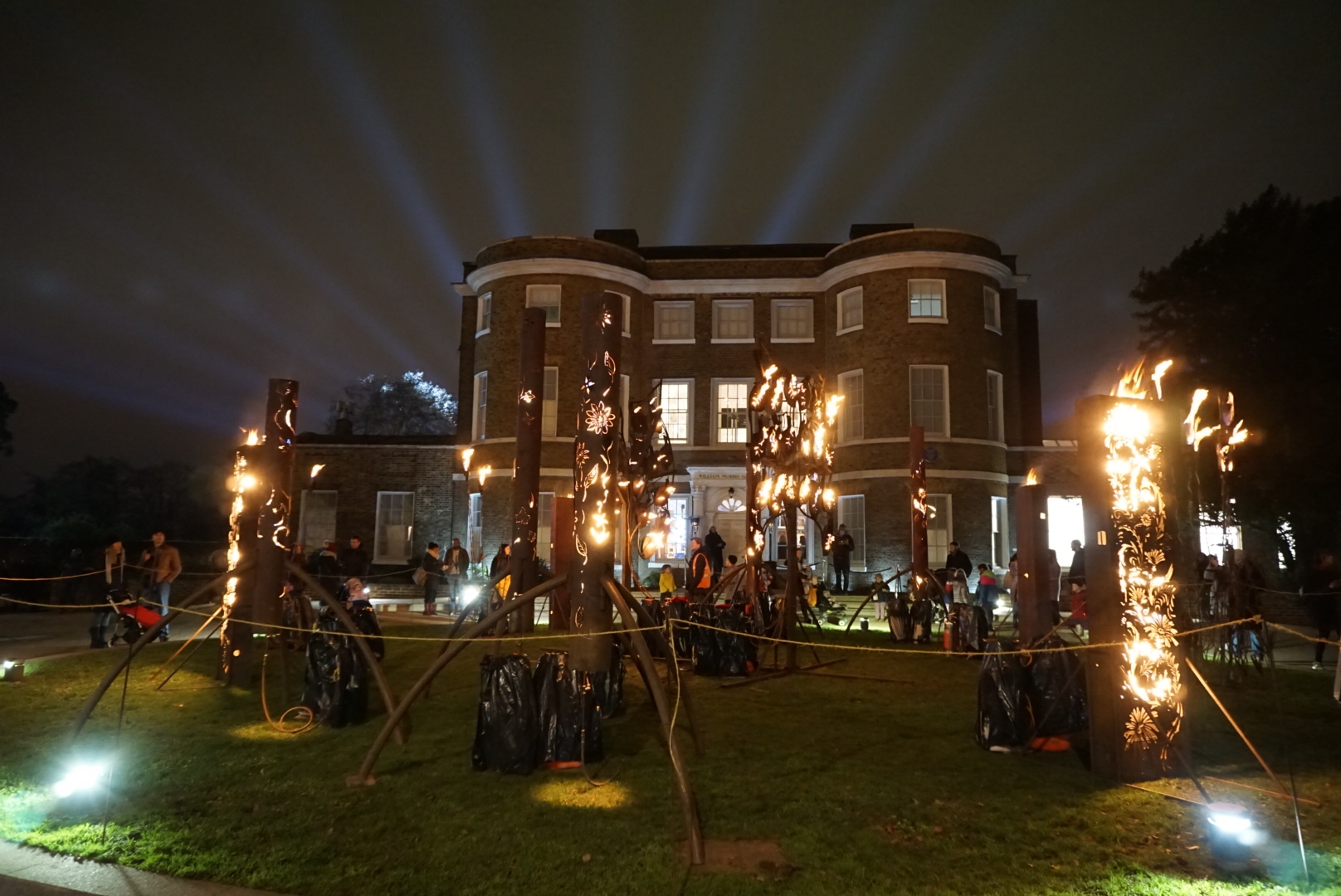 It’s another cold January day and we’re at our local park. But this is unlike any other visit we’ve ever had. Museum Girl is craning her neck, mesmerised by the intense shafts of light that dance across the dark, cloudy sky. They are so powerful I saw them from miles away, crossing the marshes on a freezing cycle journey home. The kids have run into the street each evening, pointing out the patterns that the brilliant beams make. We’ve already glimpsed The Nest from the car-free roads outside, occupied only by people and street performers, for a few nights at least. 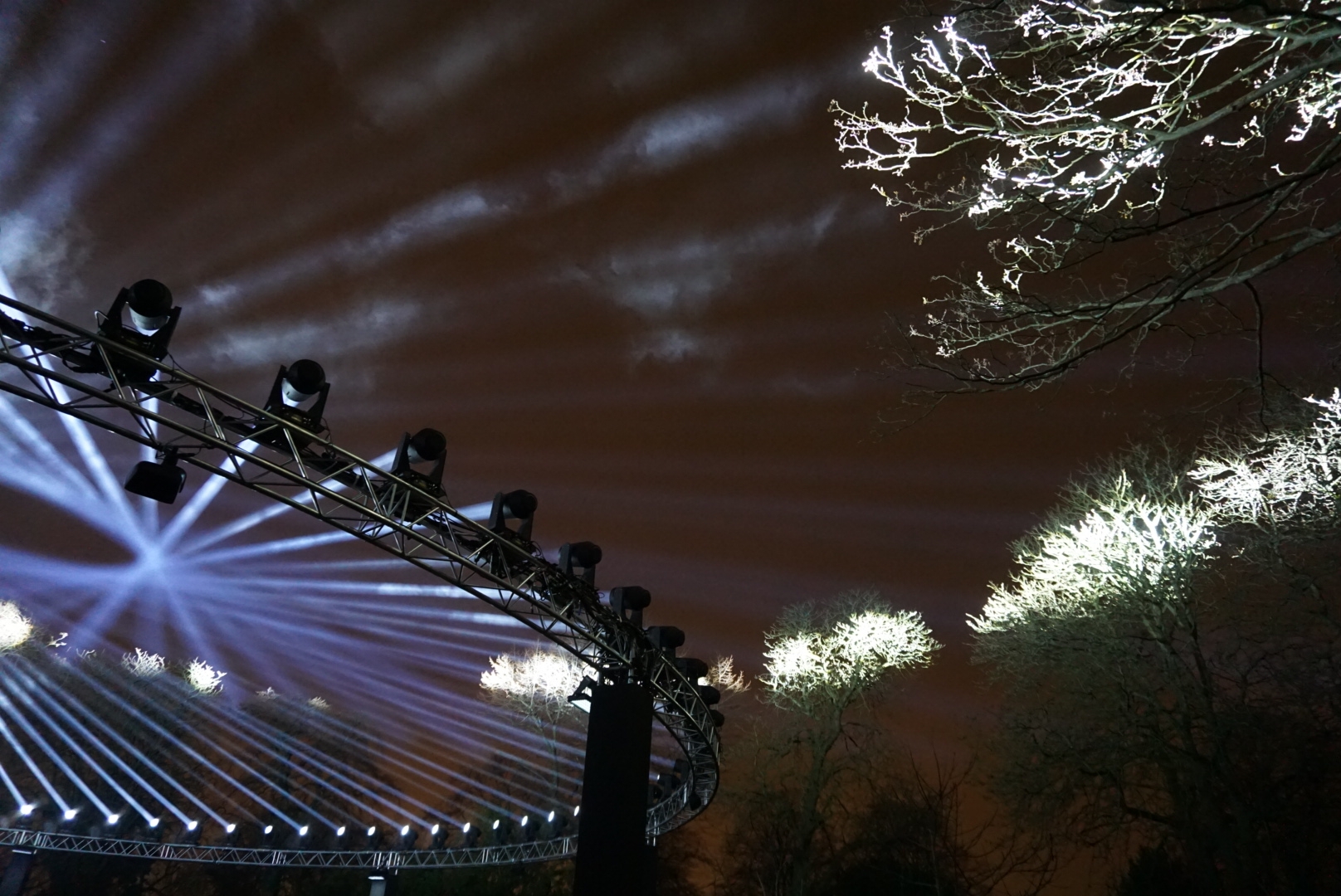 Up close, there’s even more magic to this installation. We wind our way to the heart of the work, inside the moated island that was once part of William Morris’ childhood garden. This is a calm place, and the experience feels very intimate, especially after the busyness of the streets. The light shafts catch the tops of the trees, their bare branches bleached against the inky night sky. Everything is accompanied by a moving, eerie soundtrack, the voices of a thousand local singers sounding almost like something from a medieval cathedral. 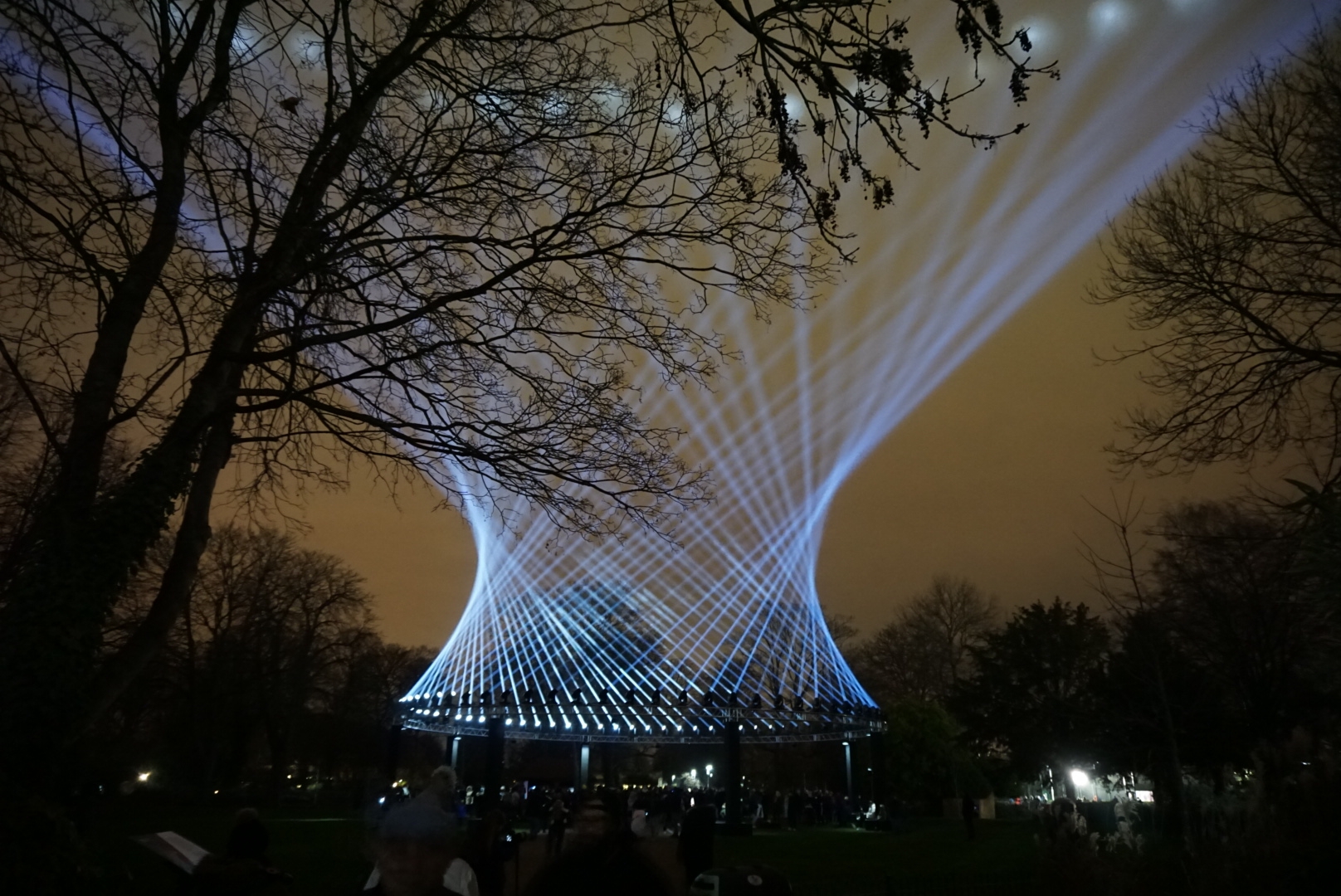 The effect is hypnotic, and I’m unsure how much time passes whilst we’re there. I could have spent much longer there, had it been for the dropping temperatures and the children’s yawns. 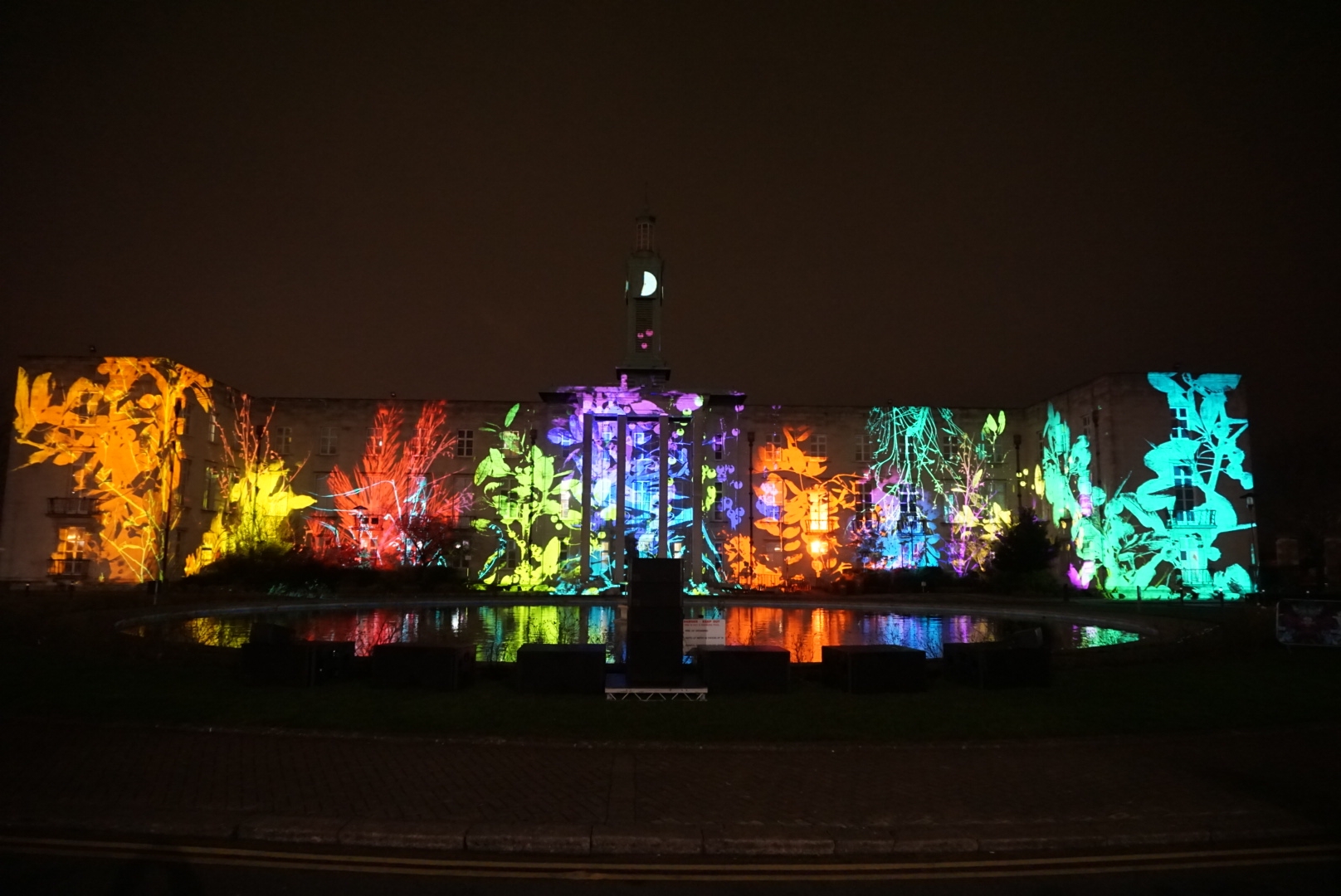 The next night I tear down to see the projections at the stunning art deco Waltham Forest Town Hall. Into the Forest is one of the best light shows I’ve ever seen. The monumental council building is transformed into a forest, a tower block, a grafitti’d wall. I marvel at the skilful lighting, which picks out small details of the building with exacting precision. The upbeat soundtrack by Mercury Music winner Talvin Singh really conveys the youth and energy of the borough. It’s not just bright and colourful though – there’s an important message behind it.

Thousands of local people have contributed to this film, their faces, voices and performances all interwoven. Spoken word performances burst with pride, of local history, of the area’s rich diversity. Beautiful William Morris prints spread over the whole facade. But there’s also fear – of gentrification, of being pushed out. It’s a richly complex narrative that still manages to be upbeat and celebratory. I walk home, my heart lifted. This is the type of culture I like best – inclusive, clever, and top of its game. I’ve never been prouder to live here. 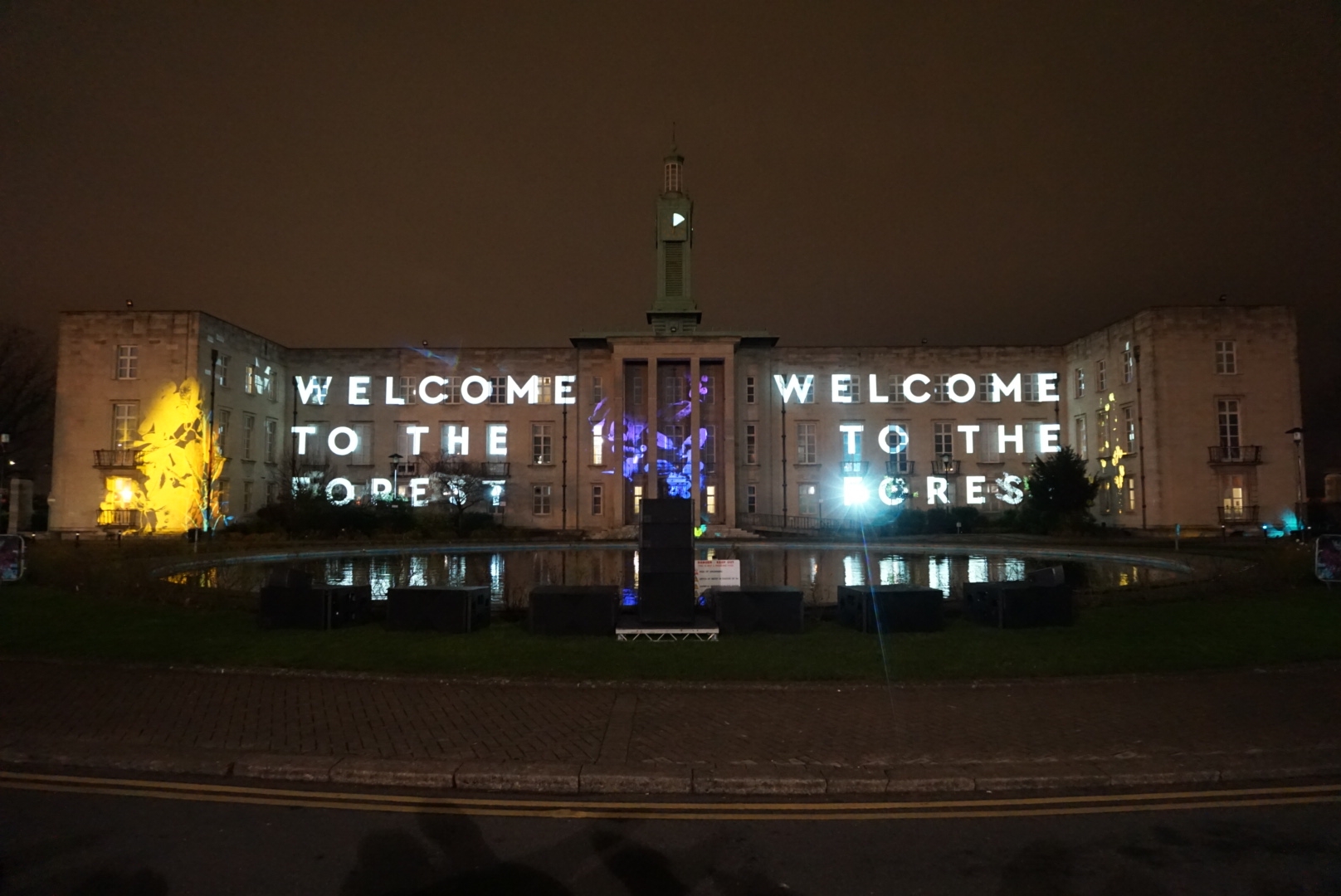 I’ve just described the incredible opening event for the Waltham Forest London Borough of Culture 2019. After public voting and expert judging, Waltham Forest is the very first London Borough of Culture – in 2020 it will be the turn of Brent. The Mayor of London scheme aims to make lasting impact on people’s lives, by giving Londoners the chance to experience world-class culture on their doorstep. It works with internationally-renowned artists whilst also engaging with the artists, people and stories of Waltham Forest.

It might be the first London Borough of Culture but there’s a lot of experience behind it. The creative director, Sam Hunt, was at the helm of the critically acclaimed Hull UK City of Culture and Waltham Forest has been a hub for artists for decades.

There will be something for everyone – music festivals, films, processions, outdoor installations, poetry, storytelling, and theatre are all planned. And many of these events are FREE! If there’s one year you should come to the Forest, this is it. Here’s a selection of some of the best London Borough of Culture 2019 events, for families and for adults. 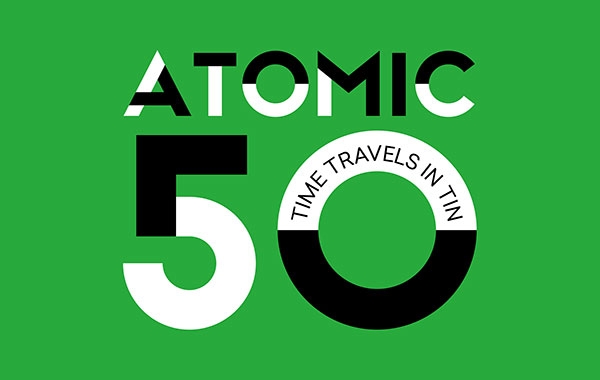 Atomic 50: Travels in Tin, 1-30 April 2019, Leyton Sports Ground
Ticketed, tickets to be released.
Step inside this ‘ghost factory’ for an immersive journey through time and metalworking. Waltham Forest was once a centre of making, from tin toys to aeronautical parts. This hands-on installation by Blackhorse Workshop will reimagine the possibilities of tin for the future.

Chingford May Day Fayre, 6 May 2019, Chingford Plain
Free, just turn up, more details to be announced.
A return to the Victorian tradition of May Day Fayres, when hundreds of thousands of ordinary Londoners would descend on Epping Forest. The star of this mass mobilisation will be the bicycle, invented by Walthamstownian John Kemp Starley.

E17 Art Trail, 1-16 June 2019, Walthamstow
Mostly free, some ticketed, more details to be announced.
It’s probably the borough’s best kept secret: an art trail which weaves its way through homes and studios, public and private spaces, featuring the creative work of over 7,500 residents. With so many events, exhibitions, workshops and activities you never know what you’ll find on each corner.

Seeds of Change Commission, Summer 2019
More details to be announced.
A brand new, large scale outdoor theatre performance created in partnership with Wirral (Liverpool City Region’s 2019 Borough of Culture) and Hull (UK City of Culture in 2017). The final work will be shaped by local communities and artists.

From Page to Pavement, throughout Waltham Forest, October 2019
More details to be announced.
Thousands of local people will collaborate to create artworks inspired by the award-winning children’s book Grandad’s Island by local resident Benji Davies.

GIANT, 18-19 October 2019, Chingford Plain
Ticketed, more details to be announced.
Billed as a ‘climbing concert’, the ancient oak trees of Epping Forest will become the stage for an extraordinary theatrical experience featuring new poems and music. For those of you with a head for heights, there’s even a chance to take part in climbing workshops in September (aged 8+).

Molecules on the Marshes, October-November 2019
Free, just turn up, more details to be announced.
An ambitious, immersive light installation by internationally recognised local artist Zarah Hussain will take place on the ‘lungs of London’. Designed to resemble thousands of water droplets suspended in the air, each ‘molecule’ will gently change colour. I hear there will be 50,000 light clusters, each representing one school child in the Borough.

Africa Express: The Circus, 29 March 2019, Leytonstone
Ticketed, more details to be announced.
Led by former Leytonstonian Damon Albarn, almost 100 musicians from around African, Europe and Britain will create a headline show. Keep an eye out for information about open rehearsals.

Art Night, 22 June 2019, Walthamstow Market
Free, just turn up.
For one night only, London’s largest, free contemporary art festival comes to Waltham Forest. Based around Walthamstow Market – the longest street market in Europe – the special art commissions will be worth catching the night tube home for. 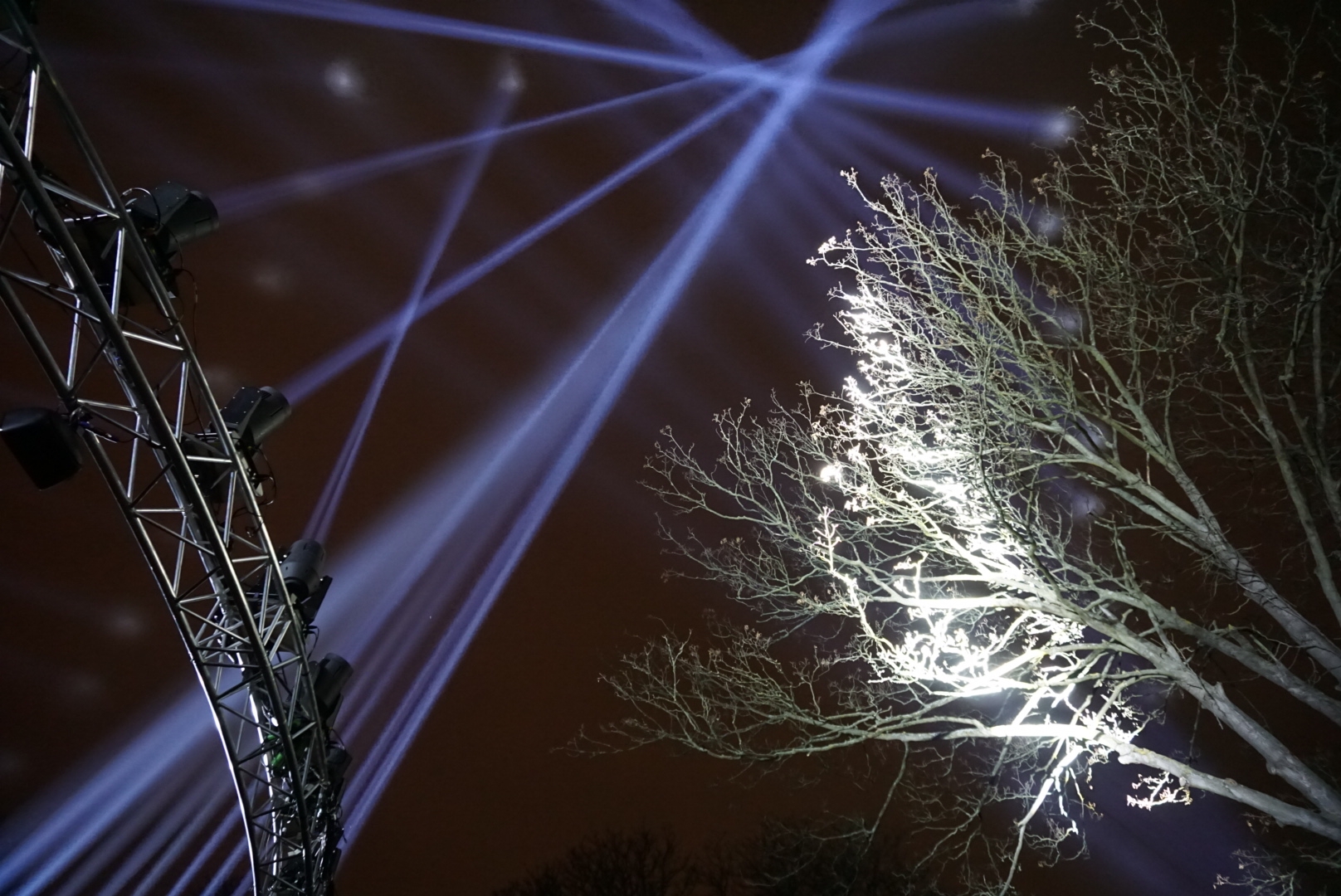 And that’s not all folks! Some events are still in development, such as a series of alternative Waltham Forest Tours. Local people are invited to submit their own ideas for the programme. Money is available in every ward and across the Borough to support yet more cultural events throughout the year. Join the Waltham Forest Borough of Culture mailing list and keeping an eye on their social media accounts to be amongst the first to know of ticket releases. Be quick though – ticketed events could sell out fast – just like they did with the Walthamstow Jazz Festival. 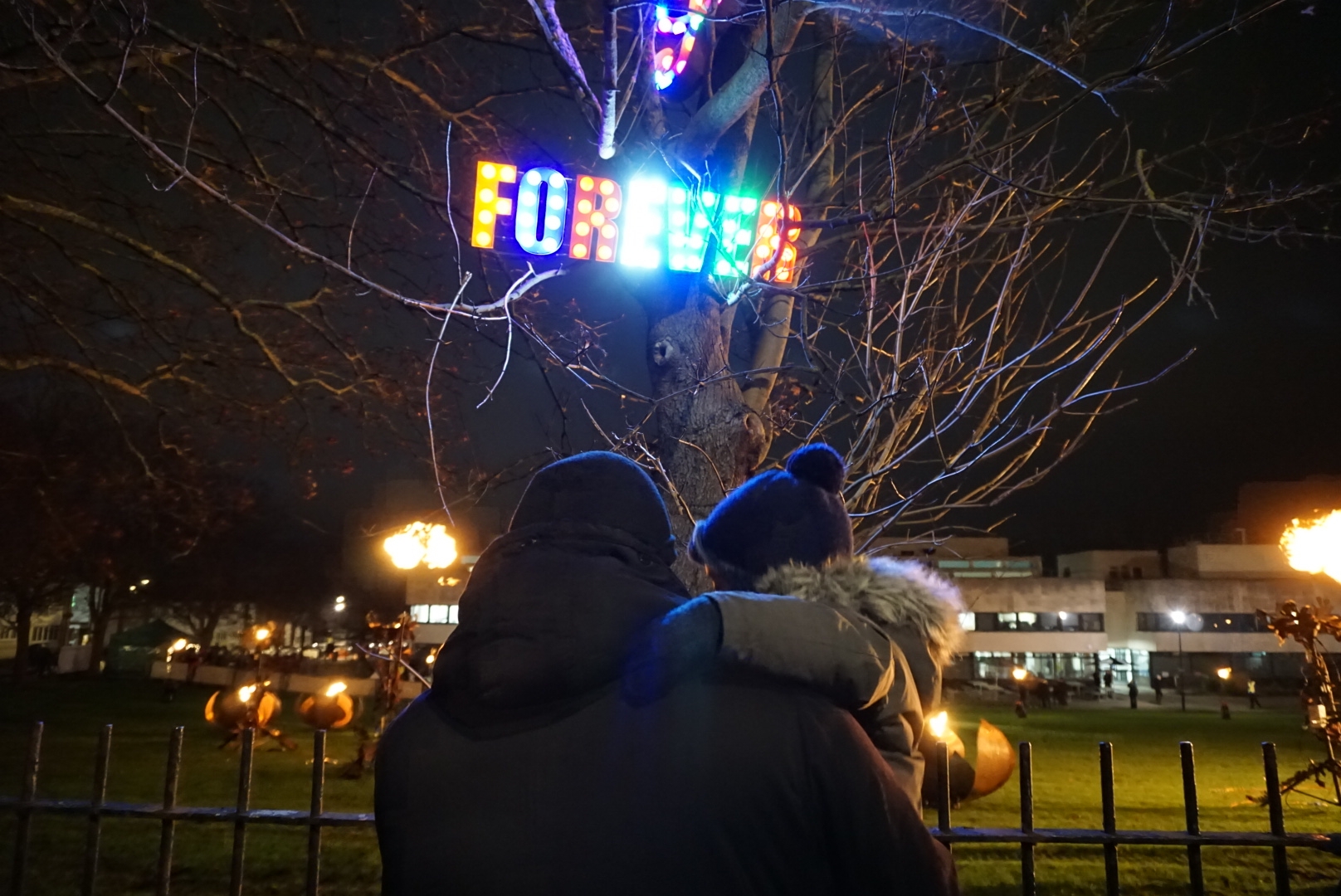 Waltham Forest London Borough of Culture 2019 events run through the whole of 2019. For further information, visit their website: https://wfculture19.co.uk/