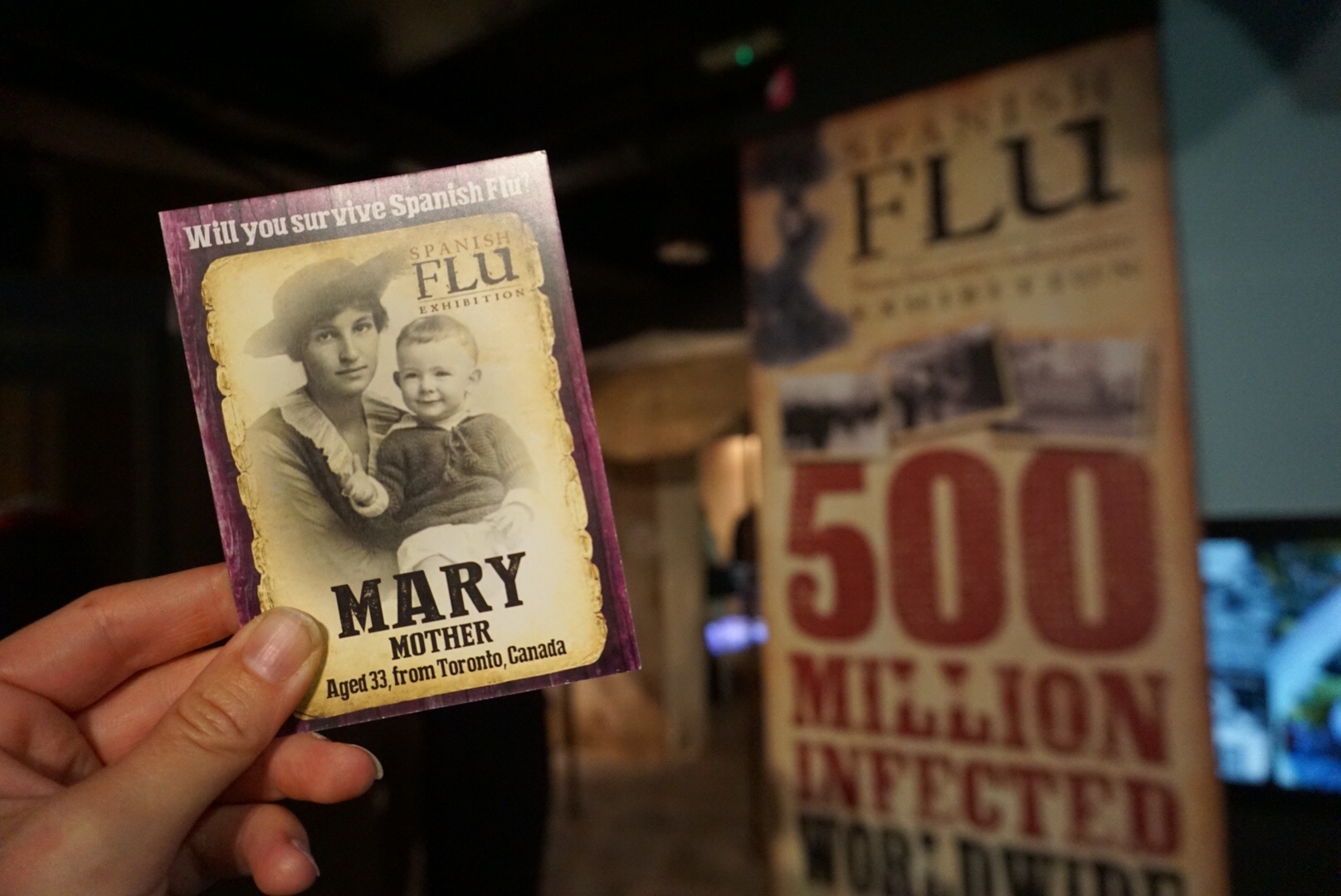 What if I told you that a strain of flu could be so virulent that it would kill 50 to 100 million people worldwide? That you could be fine at breakfast but dead by tea time? And it would disproportionately take the lives of otherwise fit and healthy 20 and 30 somethings, the age group we now dub millennials? This is no disaster movie plot, but the true story of the Spanish Flu. 100 years since this deadly epidemic, a new special exhibition at the Florence Nightingale Museum retells this neglected story.

Tucked behind St Thomas Hospital in the South Bank, next to a gated staff car park, it’s easy to miss the Florence Nightingale Museum. But at only five minutes walk from the London Eye, it’s worth seeking out. Their vibrant displays tell the heroic story of Britain’s first and most famous nurse, Florence Nightingale. Family friendly events run monthly and during school holidays. 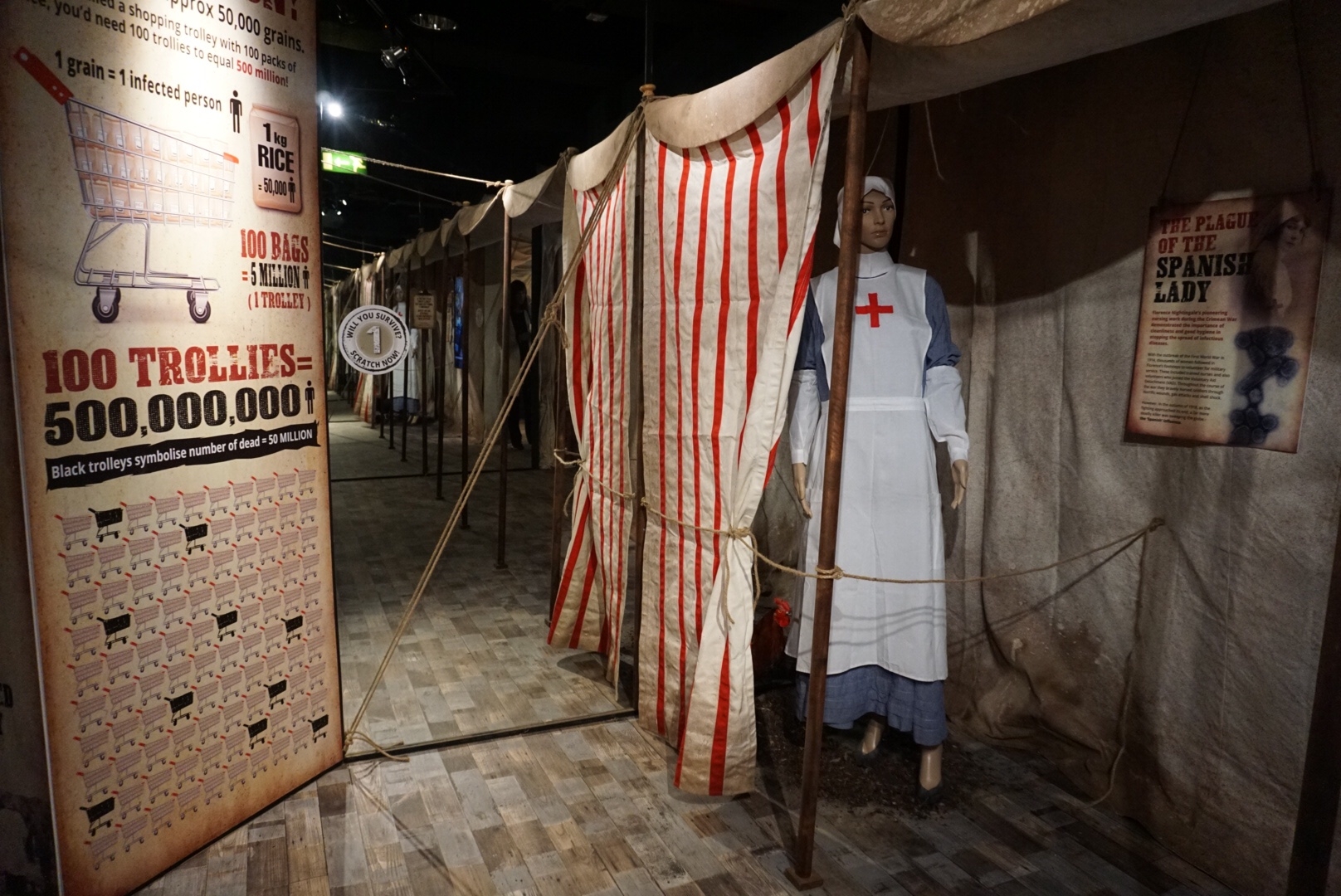 What is Spanish Flu?

Let’s set the record straight: Spanish Flu did not originate in Spain. The exact origins of the virus are unknown, but it is now thought that the first recorded cases were in Kansas, USA. Wherever it came from, war was the perfect breeding ground. With the mass movements of troops, the highly contagious disease spread like wildfire. But due to wartime press reporting restrictions, cases were reported only in neutral Spain. With the country’s King gravely ill due to infection, the nickname ‘Spanish Flu’ stuck. From May 1918 to summer 2019 it swept across the globe in three fatal waves, taking at least 50 million lives. The death toll may even be greater than that of both world wars – combined. Today, scientists studying the disease believe that it was a particularly deadly strain of H1N1, a form of bird flu. 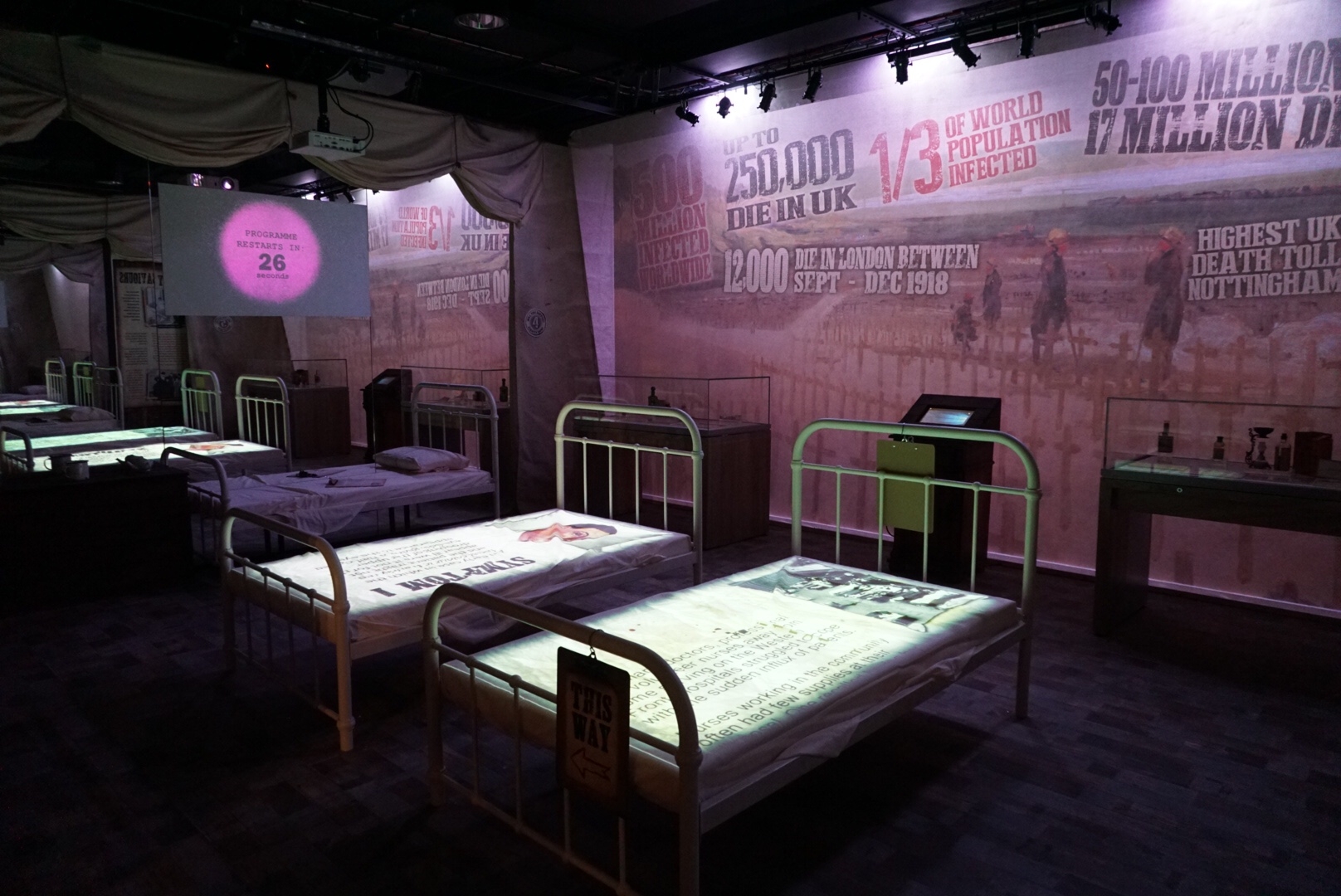 The eye-catching exhibition design is inspired by the mass mobilisation of tents to cope with the huge numbers of flu cases around the world. For a relatively small display it packs in a lot of fascinating information, in a lively and engaging way, combining interactives, scratch cards, objects, projections, audio and animation.

Sick beds line the inside of the tent, its mirrored walls carrying them on ad infinitum and conveying the sense of a packed, hastily erected ward. One of the beds shows an image of a patient’s face turning blue, which I discover was a gruesome symptom of Spanish Flu. Called ‘heliotrope cyanosis’, the victim would eventually drown in their own body fluids. 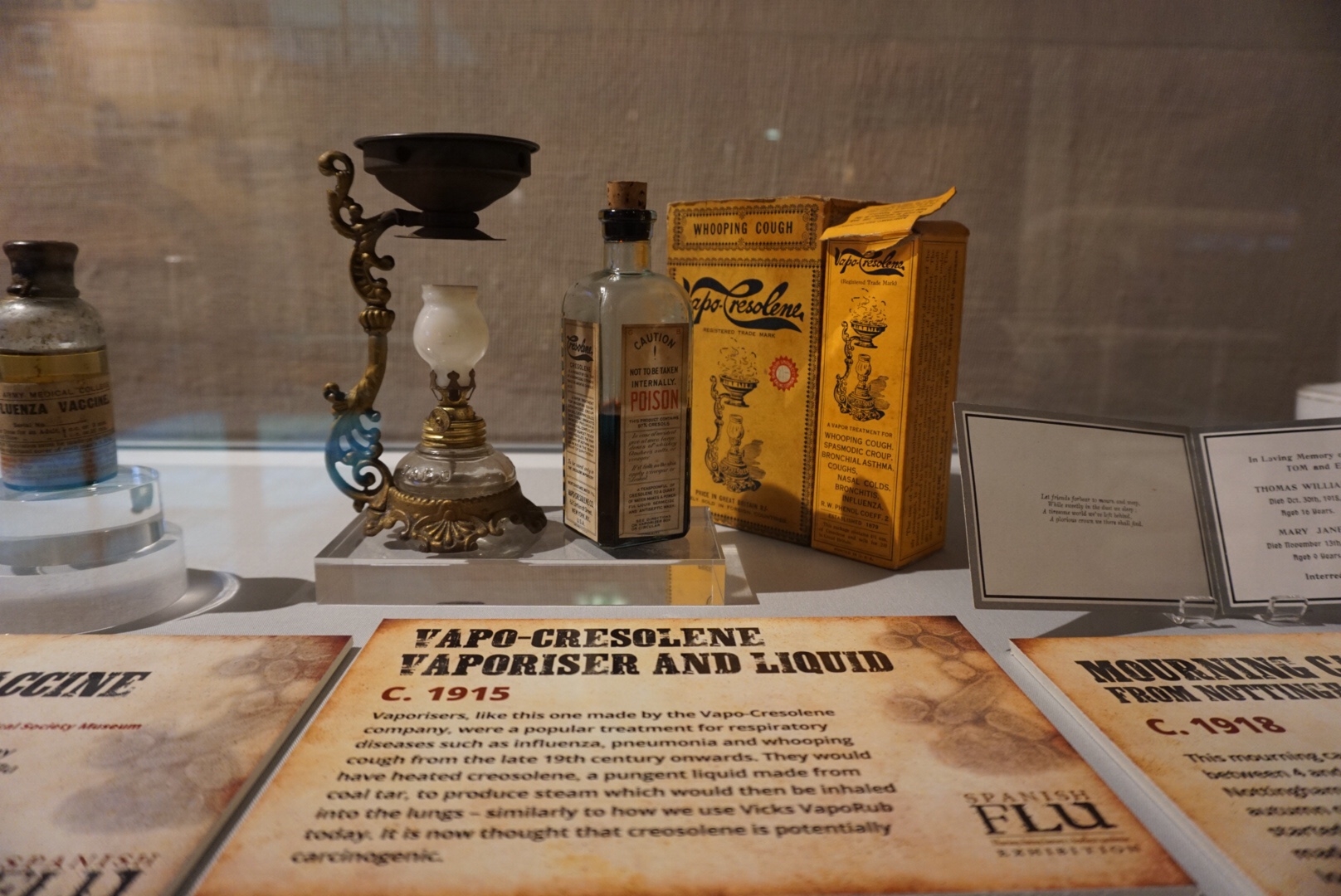 Some rare and fascinating objects detail the unusual treatments used in a desperate attempt to combat the disease. There were no antibiotics at that time, and the scientific understanding of what caused influenza was low. Some medics thought that by giving people a small doze of the virus, they could cause immunity.  On display is a rare vial of influenza vaccine created by the Royal Army Medical College in 1919, using Spanish Flu-infected lung scrapings. At home, people did anything they could to help protect or recover from Spanish Flu. ‘Remedies’ shown include the woefully inadequate perfume bottle, to the vapo-cresolene vaporiser. Seeing this item reminded me of the contraption from my infancy, used when my croup got so bad I would vomit from coughing so hard. But I had relatively little to worry about. The liquid used with this particular vaporiser during the Spanish Flu outbreak is now thought to cause cancer. 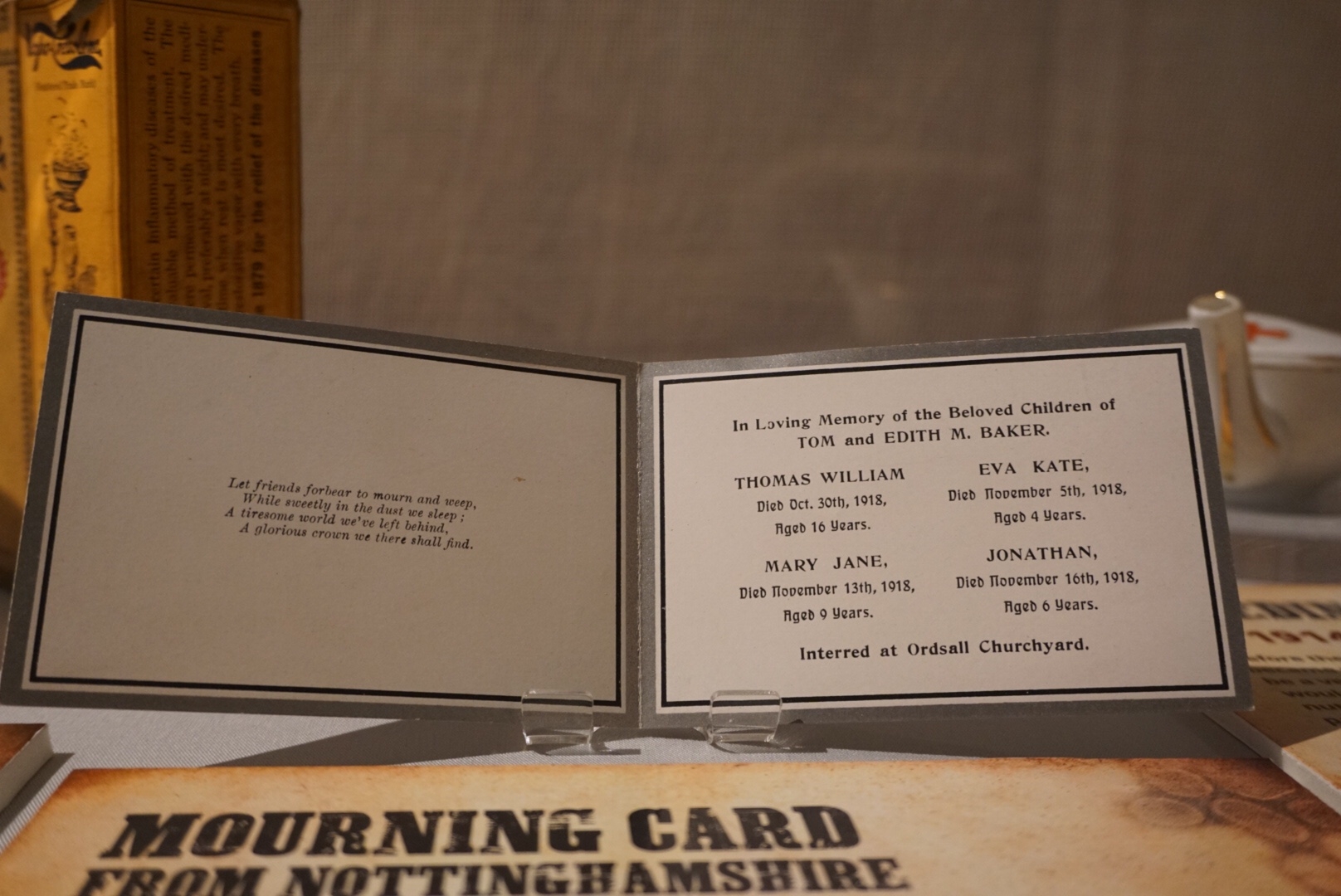 Spanish Flu had many famous victims, most of whom recovered – such as Mahatma Gandhi, Walt Disney, Prime Minister Lloyd George, Kaiser Wilhelm II and future American president Franklin Roosevelt. But I was most moved by the names of four people I had never heard of before. A small, black mourning card remembers the four Baker siblings from Nottinghamshire, all of whom died of Spanish Flu within a fortnight. My heart ached for their devastated family.

Being a museum about nursing, there is a focus on the importance of nurses in hospitals and ordinary women at home, in caring for victims. Hospitals ran out of beds, and nurses risked their own lives to care for the sick. Perhaps my favourite part of the display is when, just before the main film starts, a blue light fills the tent. Suddenly you can see fingerprints covering the beds, cups and chamber pots around the room. It’s a stark reminder that spreading disease is easy. 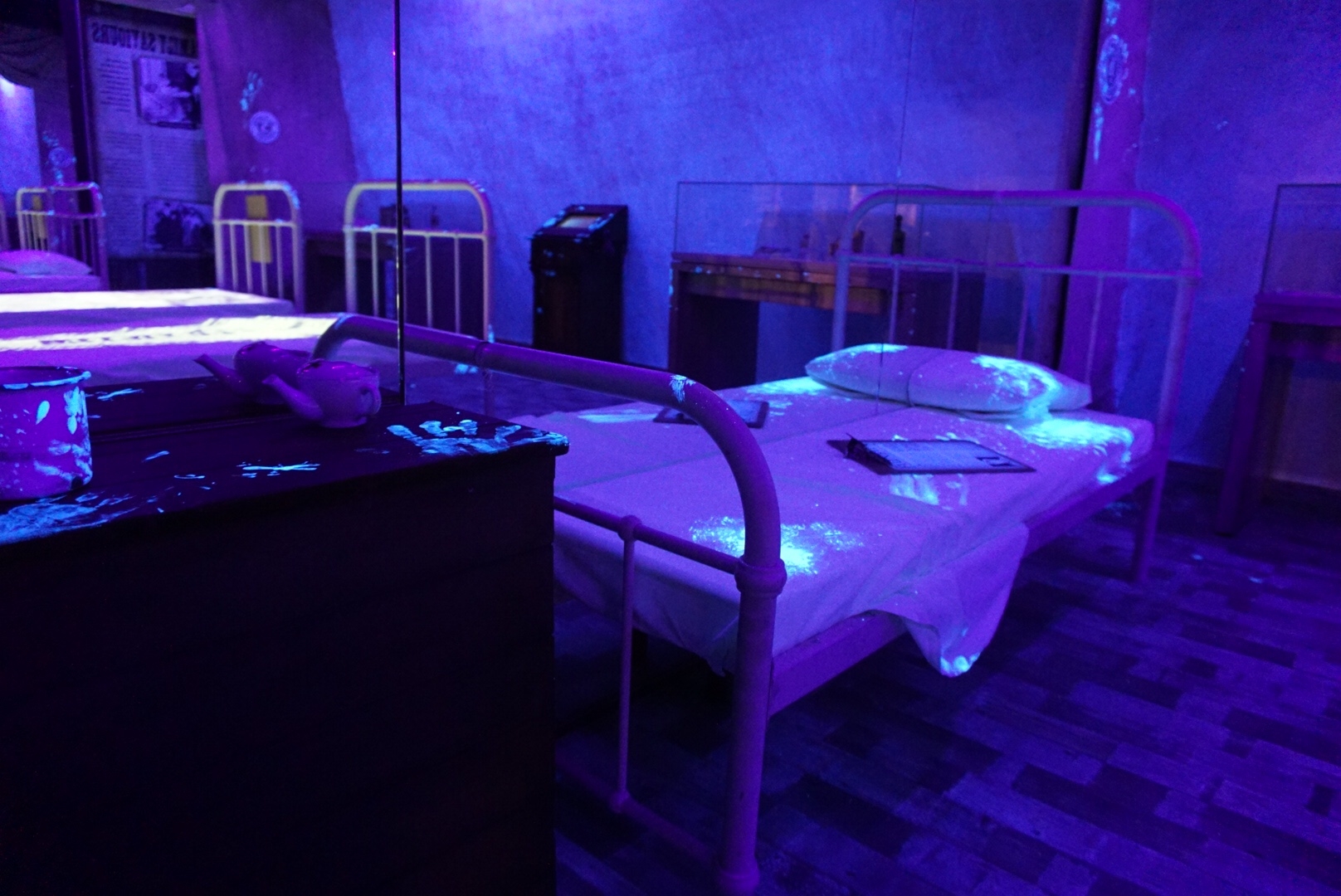 The diaries of Dr Basil Hood from the St Marylebone Infirmary have been animated specially for the display. He wearily notes the numerous nurses in his hospital who succumb to the epidemic whilst trying their best to care for the sick and dying. He himself collapses, exhausted and overwhelmed by the sheer scale of the epidemic.

Is this Spanish Flu exhibition suitable for children?

An exhibition which focuses on death and disease may not necessarily be the first thing you think of as suitable for a family audience. But if there’s one thing I’ve learnt from Horrible Histories, it’s that kids can often cope with the darker side of the past. Personally I think my 6 and 4 year old are too young, but my eldest would have loved it from aged about 11. You know your child best, and when might be a good age for them to be introduced to subjects like this. 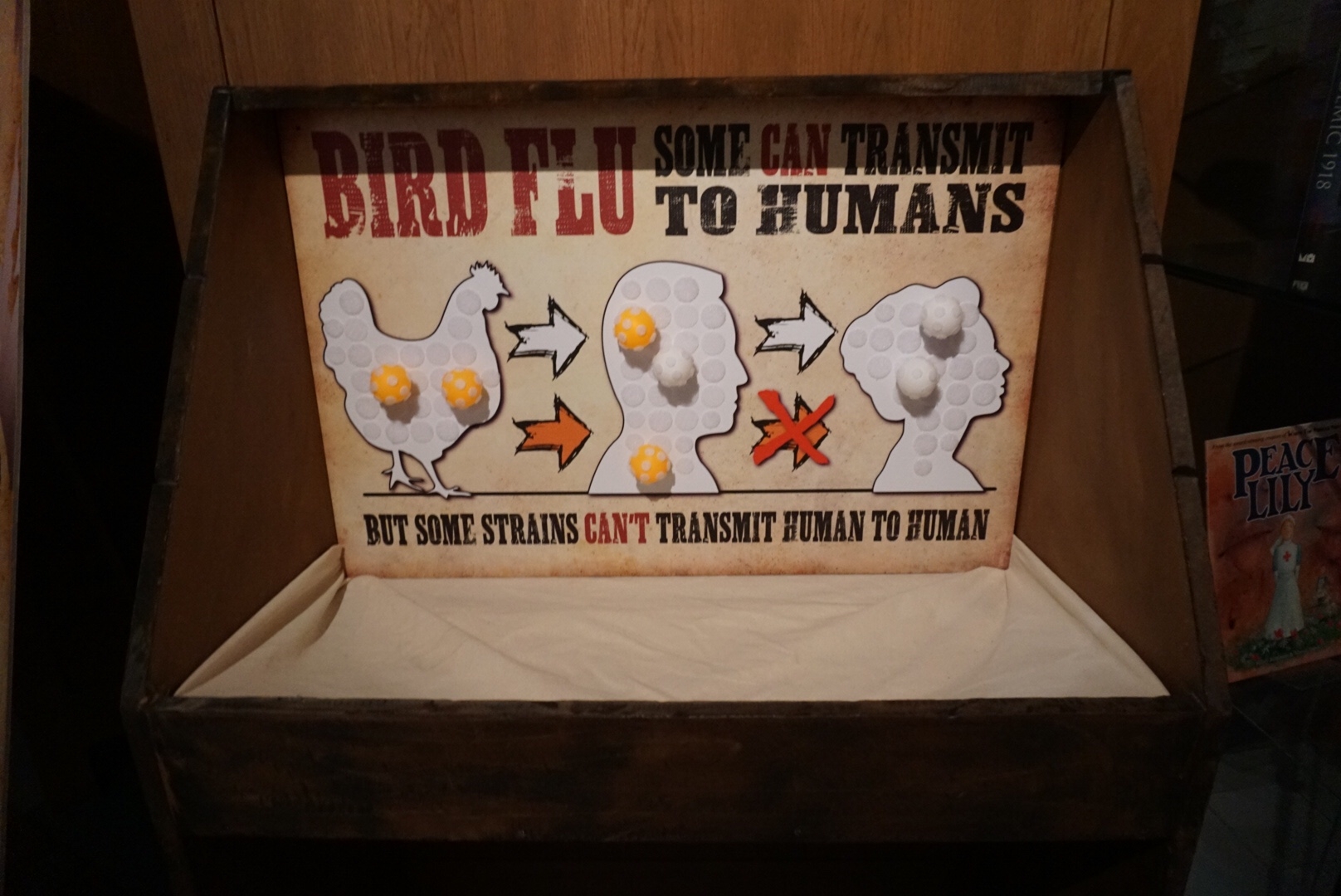 Certainly the exhibition design will have lots to engage children. Character scratch cards give them numbers to hunt for, each part revealing whether you will be fortunate enough to survive Spanish Flu. Hands on activities make complex ideas simple, such as the velcro ping pong balls which explain how only certain viruses can transmit across species. Consider timing your visit with one of their special family events, such as the forthcoming Museum Shop Sunday on 25 November 2018. Whilst the Spanish Flu may be a difficult topic, it’s an important one. Remembering the impact of past epidemics can help us be more prepared for future outbreaks. 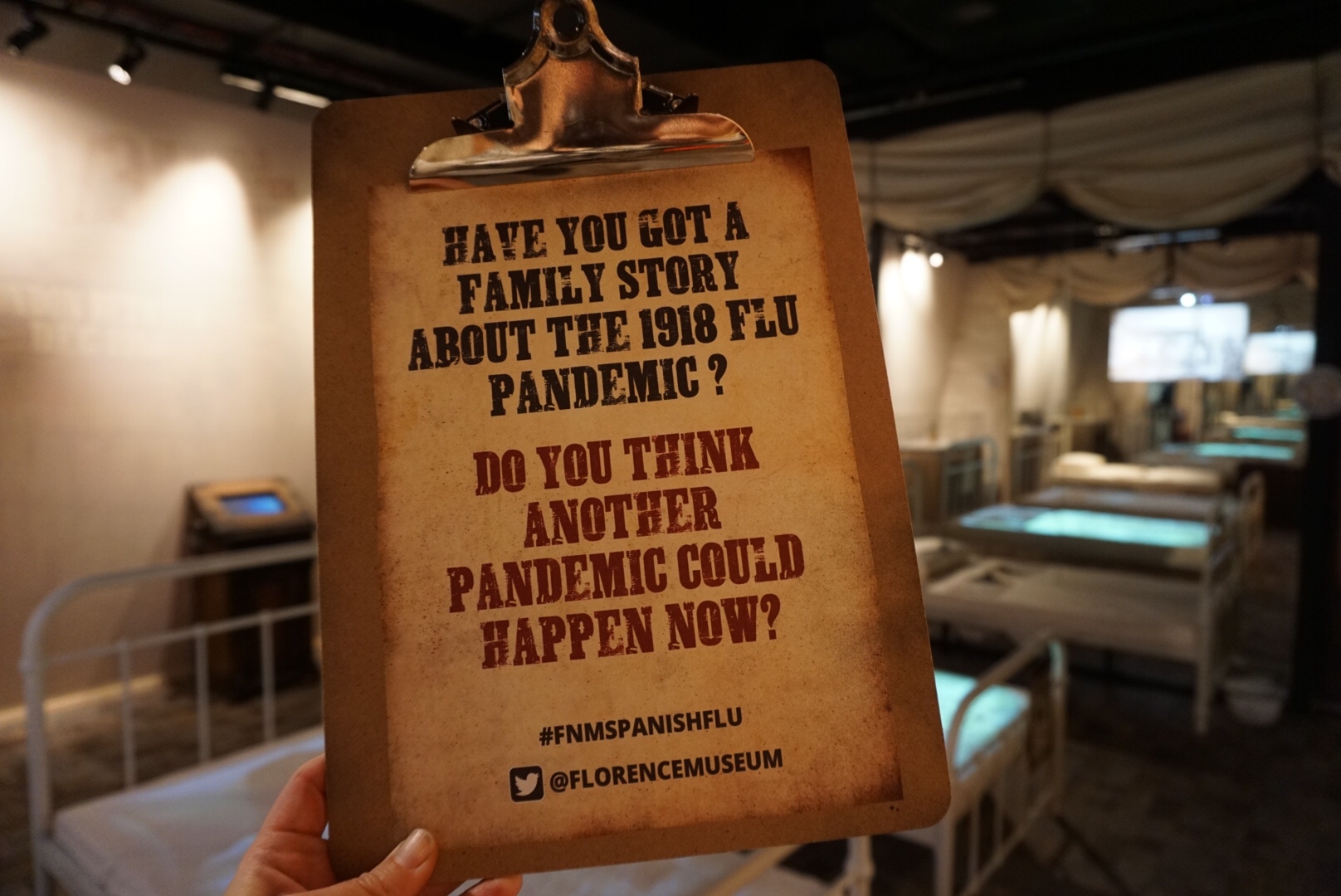