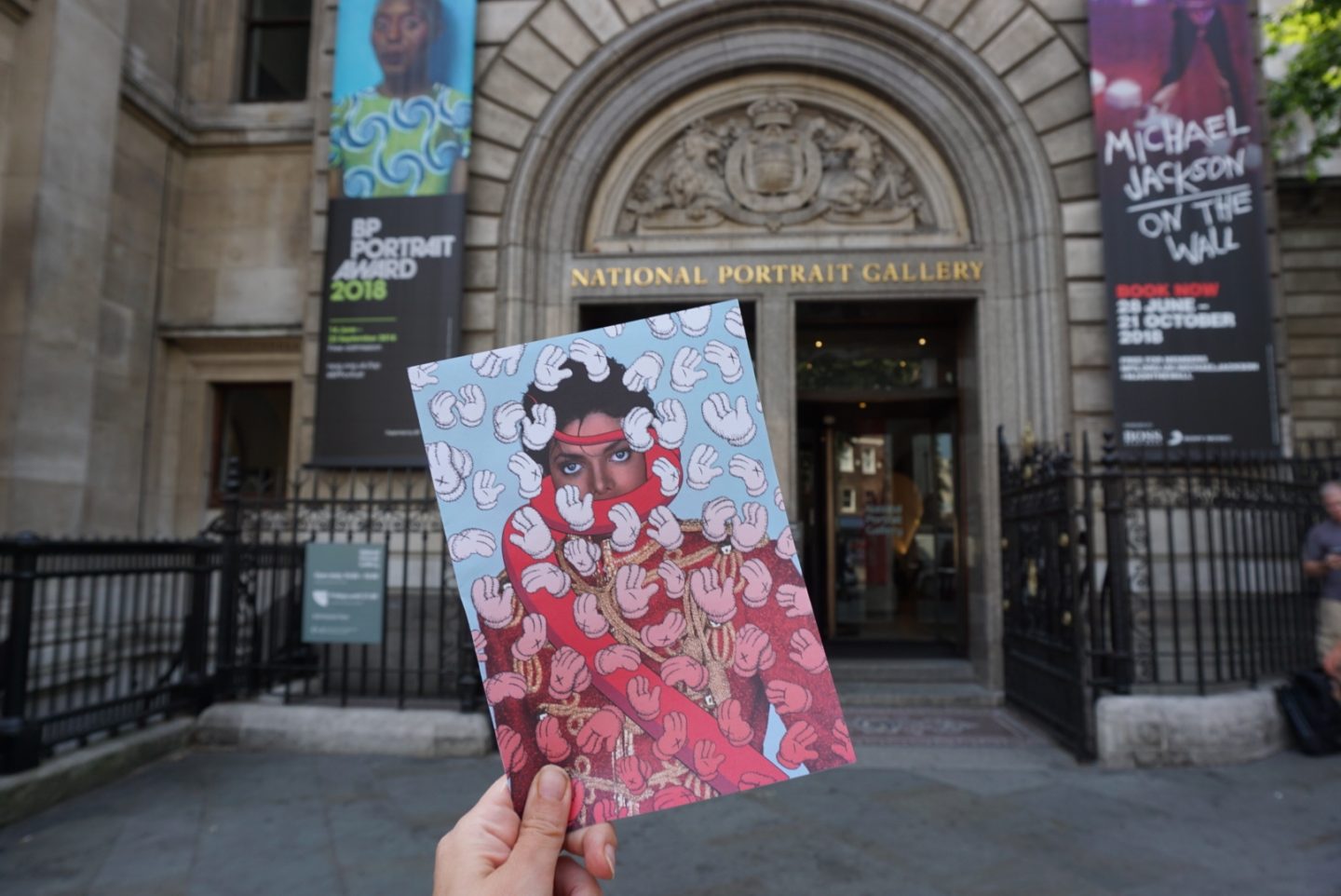 When I first heard the National Portrait Gallery were staging a Michael Jackson exhibition, I was very dismissive of it. ‘What a load of tosh – they must be desperate!’ I thought to myself.

And then one piping hot day I found myself with time to kill and a teenager to entertain in nearby Trafalgar Square. The lure of air conditioning just a stone’s throw away was enough for me to suggest a visit.

This is how I discovered how wrong I can be about exhibitions.

Because Michael Jackson: On the Wall is one of the best exhibitions I have seen in quite some time. It’s innovative, radical yet accessible. And – most importantly when there’s a teenager’s short attention span at stake – it’s LOTS OF FUN! 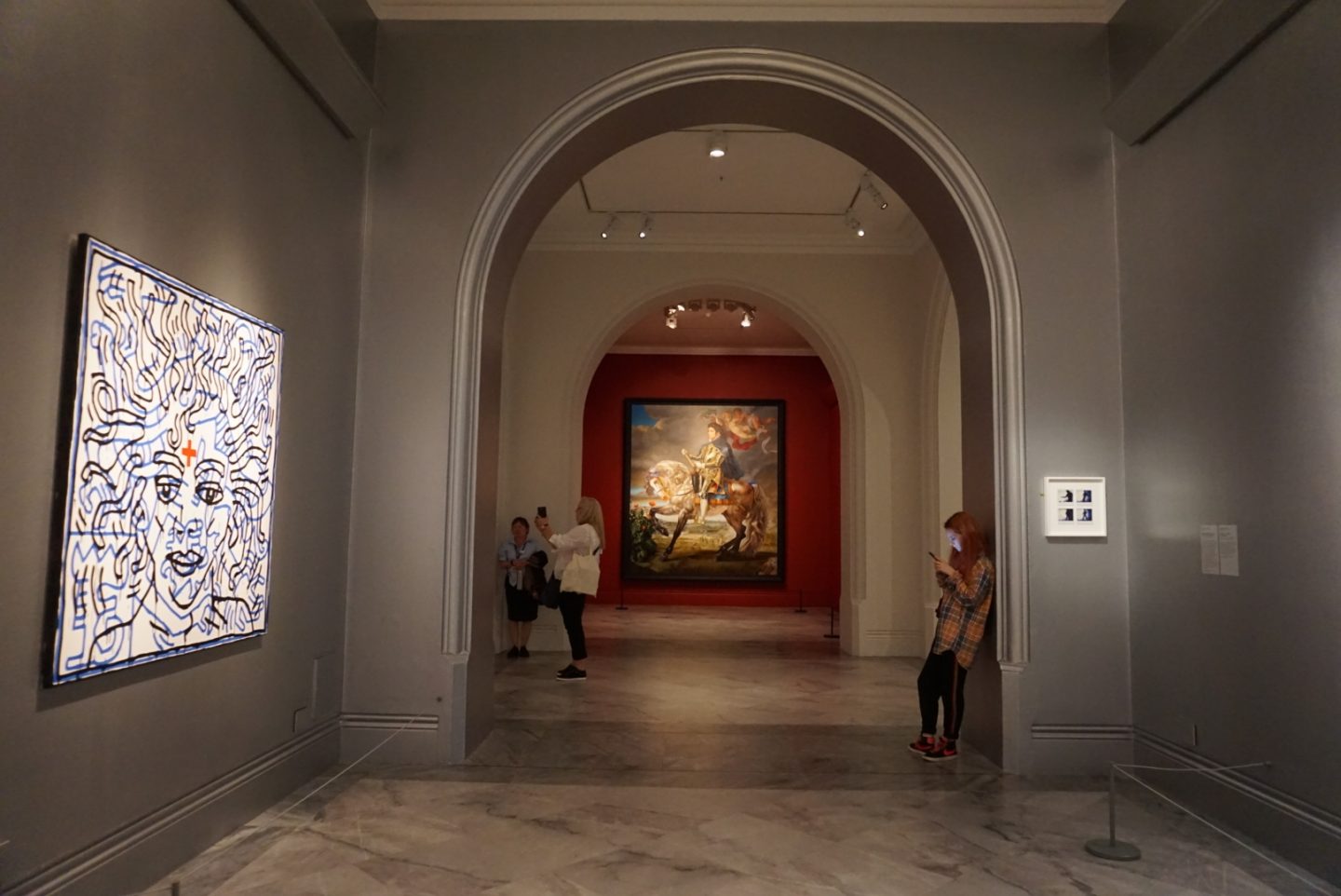 WHAT IS MICHAEL JACKSON: ON THE WALL ABOUT?

Michael Jackson’s musical legacy is undeniable. The ‘King of Pop’ sold over one billion records; for decades his Thriller was the world’s best selling album. My teenager was only at primary school when Jackson died unexpectedly in 2009, but the mass outpouring of grief was felt even in her playground. Her seventh birthday party included an MJ tribute disco, with glow sticks, in our living room. But her musical tastes moved on, and so I had no idea if the current exhibition would appeal to her.

Michael Jackson: On the Wall explores how Jackson inspired contemporary artists for decades, even after his death. It showcases nearly 50 artists, from big hitters such as Andy Warhol, Grayson Perry, and Keith Haring, to new-to-me names. But you don’t need to know anything about contemporary art, or even be an MJ fan to enjoy this exhibition. In some ways, it’s not even about Michael Jackson. It’s about race and racism; image and idolatory; communism and censorship. 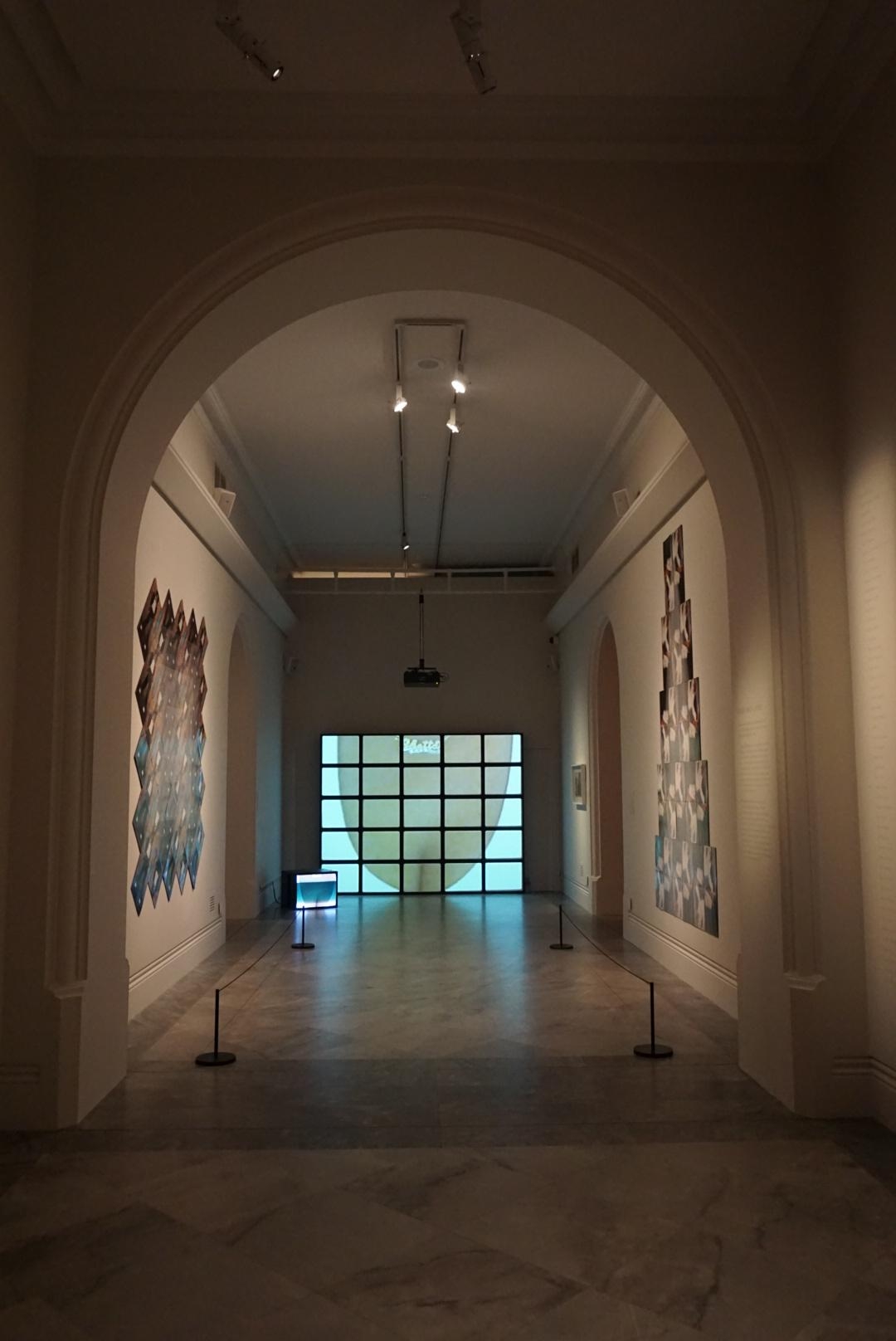 WHAT WILL I SEE AT MICHAEL JACKSON: ON THE WALL?

One of the first things you see when you enter the gallery is a giant video installation, of artist Susan-Smith Pinelo dancing to Workin’ Day and Night. The focus on the artists jiggling boobs is deliberate – drawing attention to how women, especially black women, are often reduced to sexual objects. Pinello was so proud to see the Jacksons as ‘the first wholesome black American family who entered homes all over the US. This was during a time when most black people on television were portrayed as criminals, drug addicts or violent.’ Through the Jacksons, she felt seen. 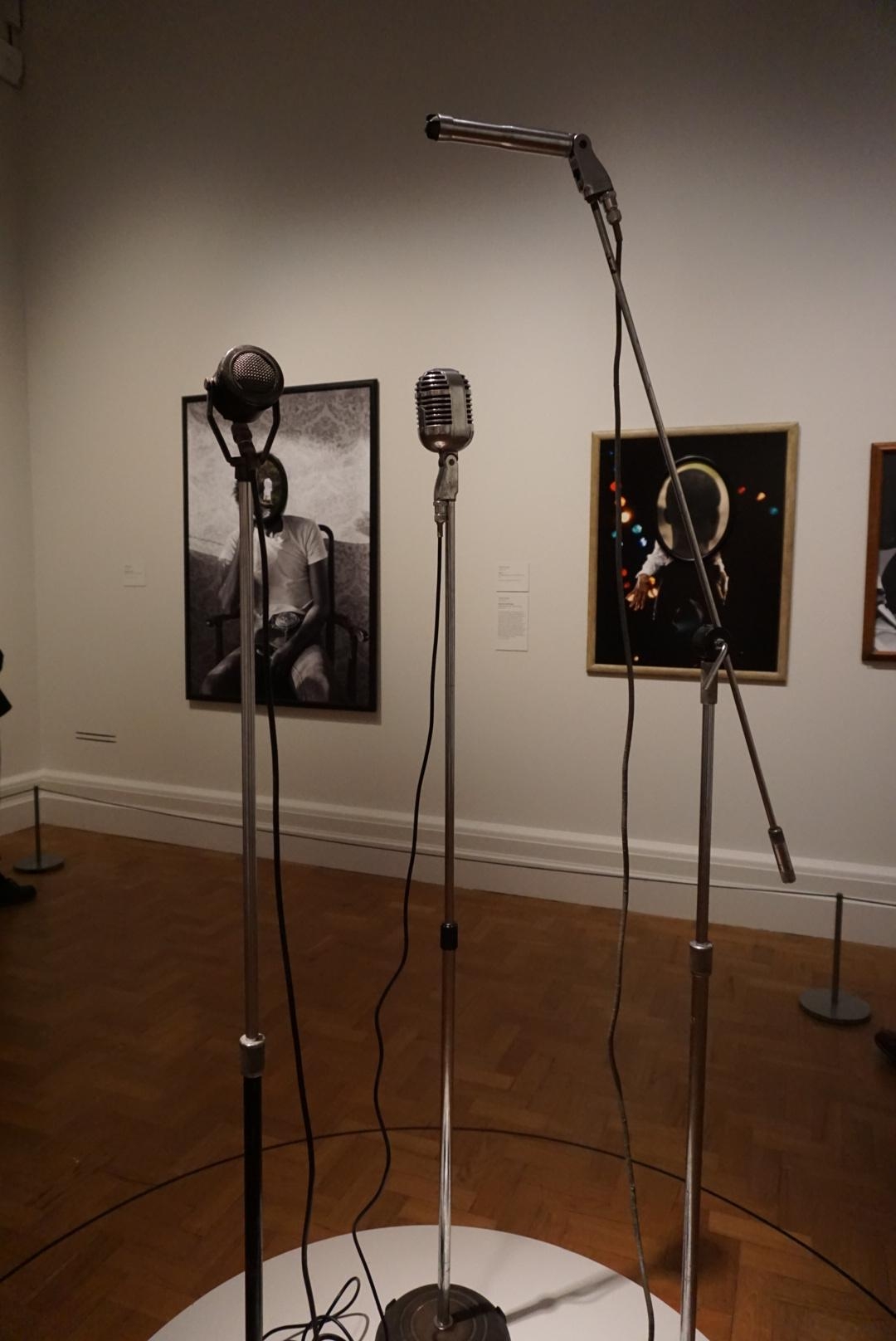 David Hammond’s installlation of three microphones asks ‘Which Mike do you want to be like’? Each represents a famous Mike – Jackson, Tyson the boxer, and Jordan the football player. It’s a simple but effective comment on the ‘aspirational’ options open to African-American men – the mikes are all set a little too high out of reach. 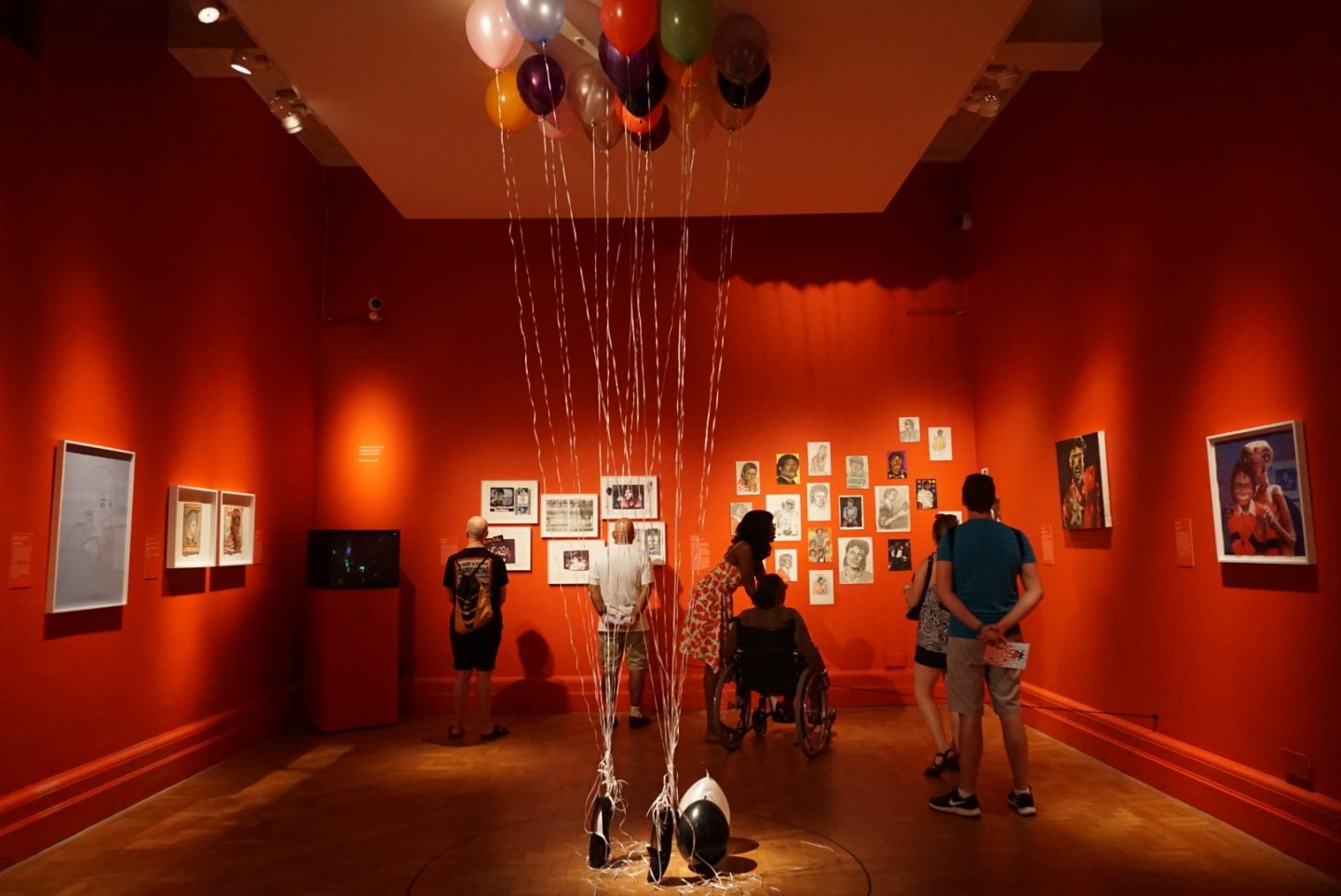 One room felt like a birthday party – bright red, with a bunch of coloured helium ballons slap bang in the middle. Artist Appau Junior Boakye-Yiadom uses the balloons to lift a pair of black loafers, capturing Jackson’s signature dance move of freezing on tiptoe. 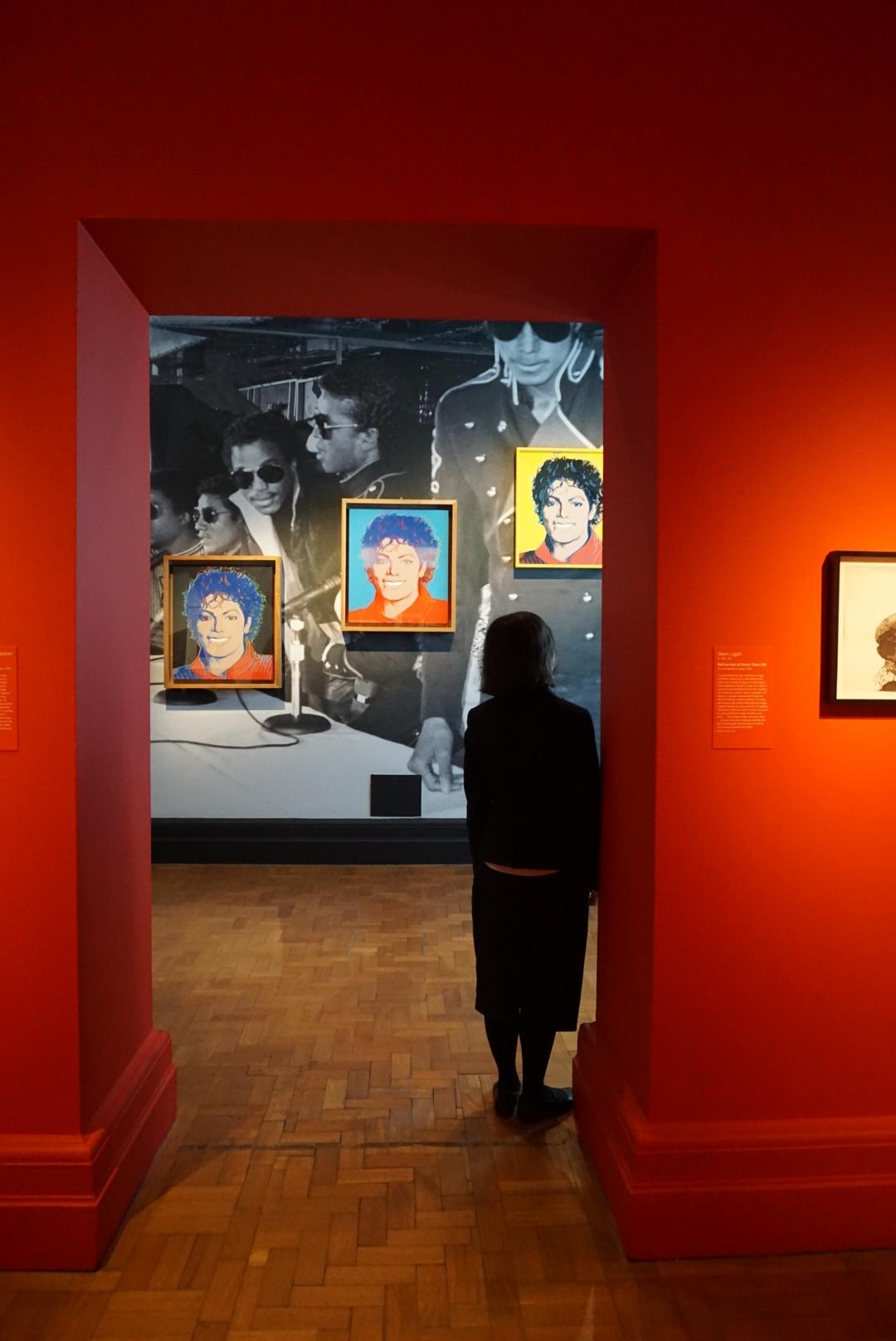 I was bowled over to learn that Jackson had inspired the legendary New York artist Andy Warhol – he was in fact the first artist to use Jackson as a subject. Besides the pop-art portraits, you can see the ‘time-capsules’ of Jackson ephemera that Warhol created and sealed. Museum Teen was particularly taken with the MJ Ken-style doll! 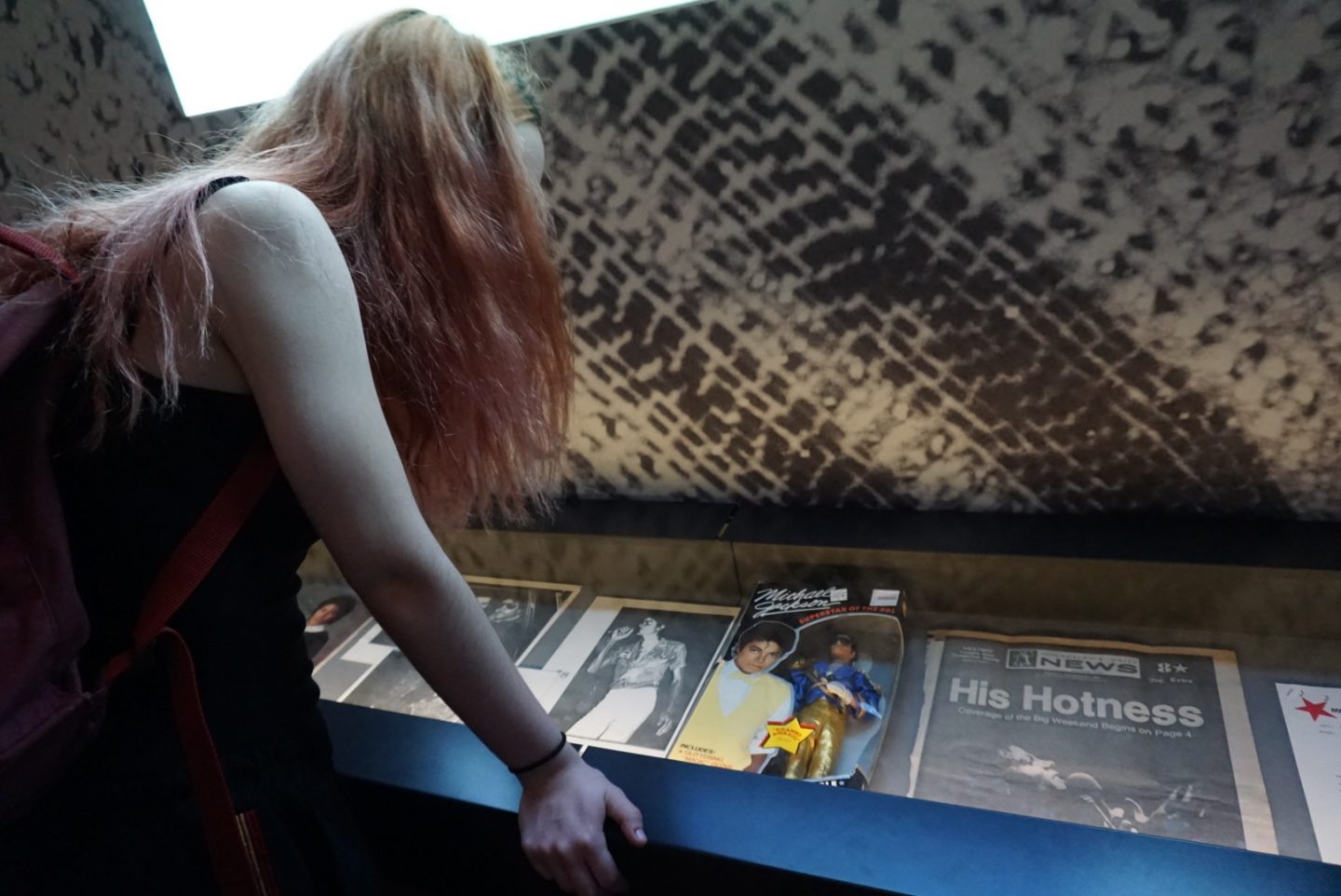 And I’m sure I’d previously seen footage of screaming, crying, almost psychotic teenagers at one of Michael Jackson’s concerts. But Dan Mihaltianu’s work really put this in context – this was in Bucharest, just three years after the fall of the Berlin Wall. These teenagers, brought up under communism, were now experiencing the full razzle-dazzle of the West, via the world’s most famous pop star at his peak. No wonder they looked slightly crazed! 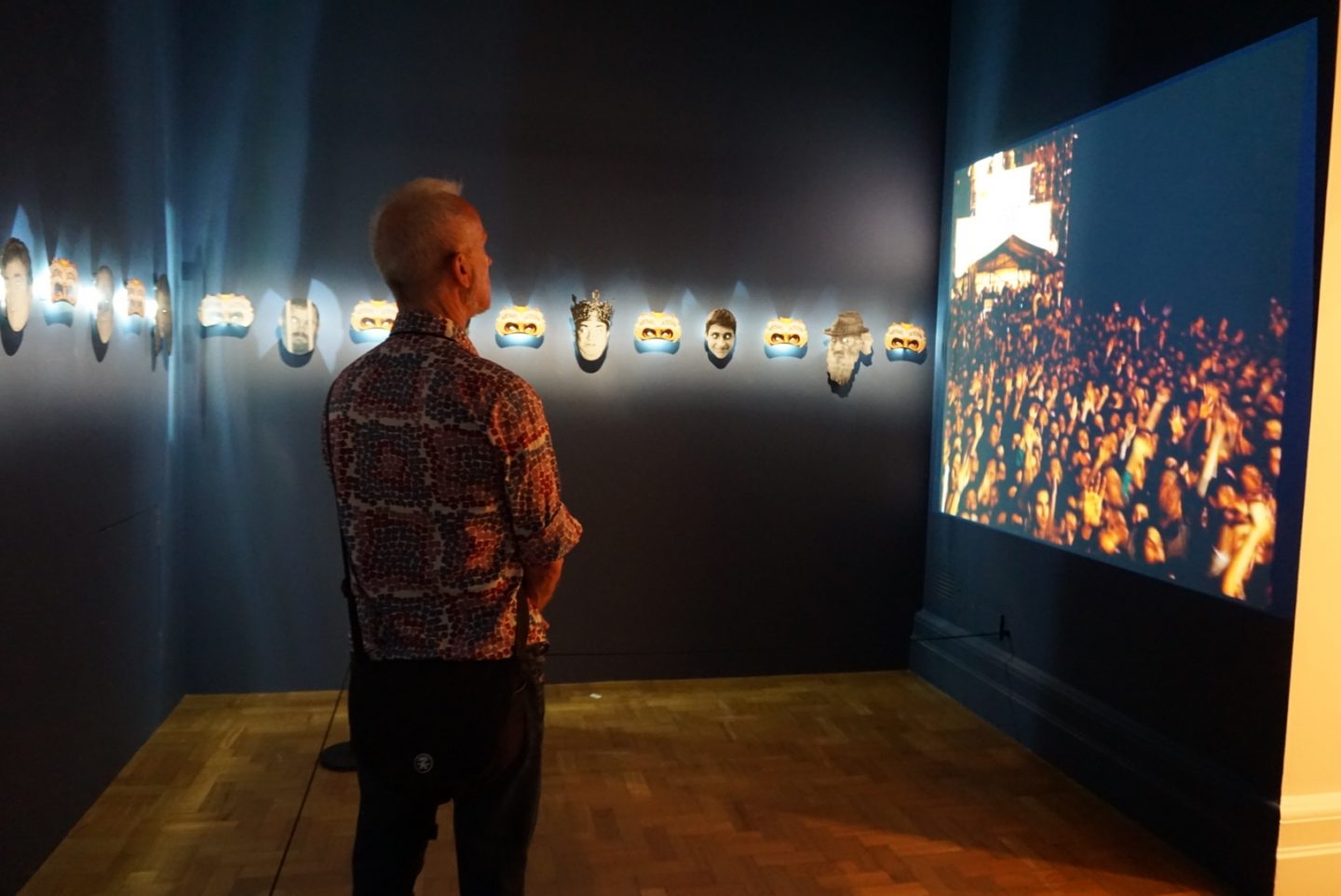 The cult of Jackson is explored further. Mark Ryden’s painting is instantly recognisable as the artwork for Jackson’s Dangerous album – but have you ever thought about the fact that  notice Ryden only needed to use Jackson’s eyes to depict the artist? 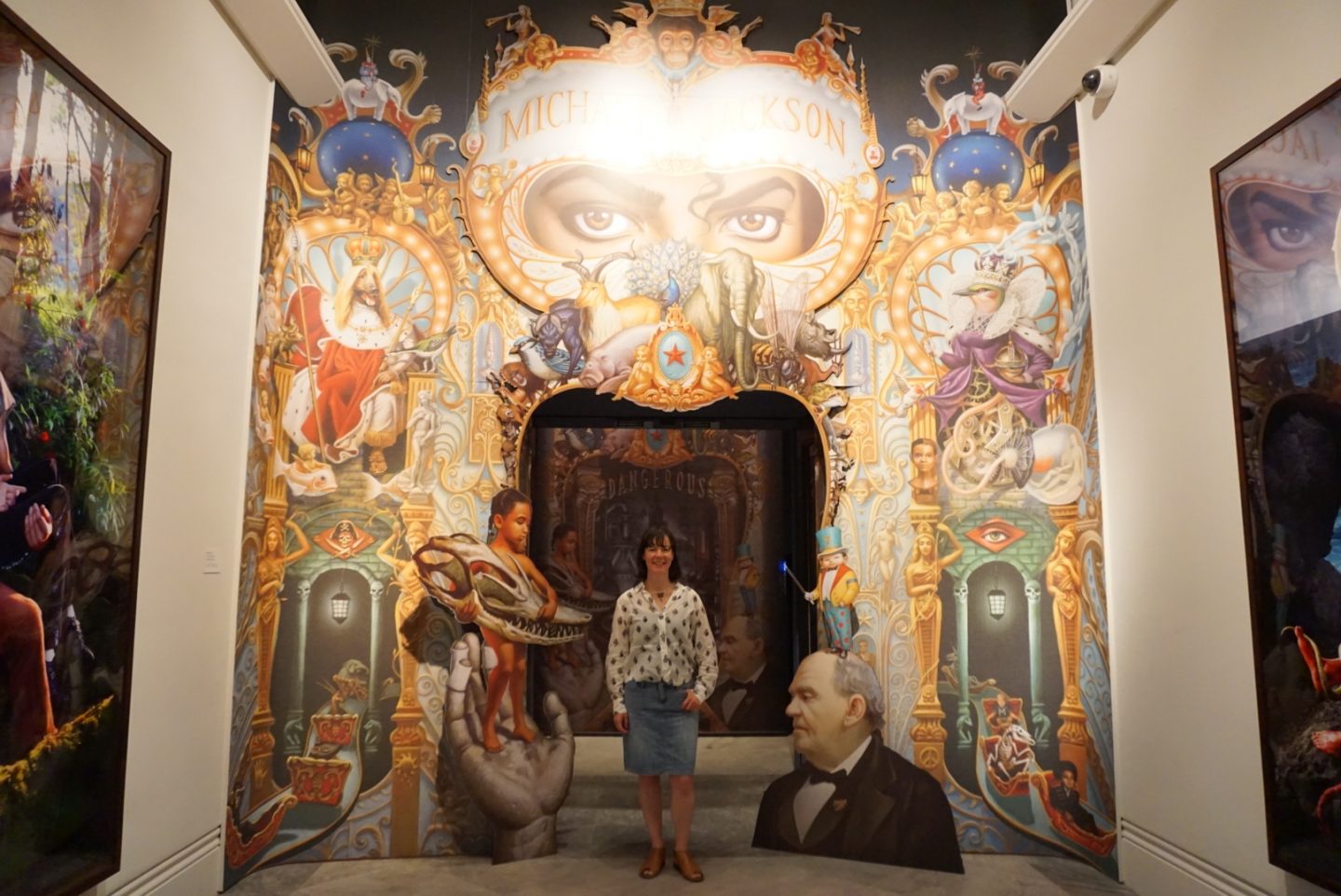 MJ fans will be delighted to see his ‘dinner jacket’ by Michael Lee Bush, who designed some of his most iconic tour outfits. Here, Bush has covered a leather jacket with forks, spoons and knives. It’s designed to raise a smile, and it’s one of the items which most evoked Jackson’s presence. 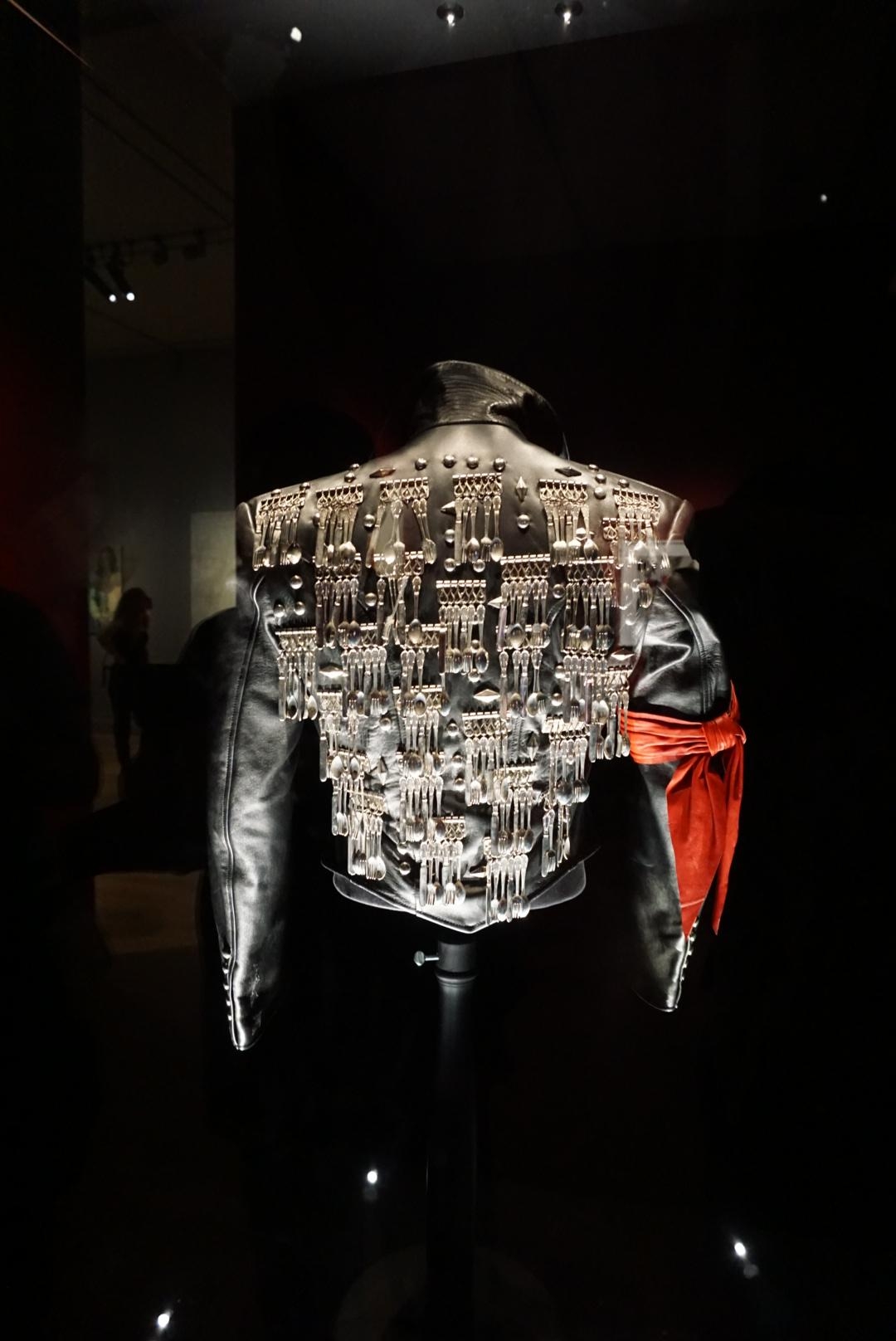 But my absolute favourite exhibit was a video artwork by Candice Breitz. Sixteen German die-hard MJ fans sing Thriller – and all of their performances are played at once. The room was filled with laughter as the performers whooped and hard breathed through their performances. Museum Teen and I joked how the most exuberant singer and dancer (me) was next to the quietest and most introvert (her). A group of twenty something women started singing along together, enjoying every minute. And this brings me on to why I loved this exhibition so much. 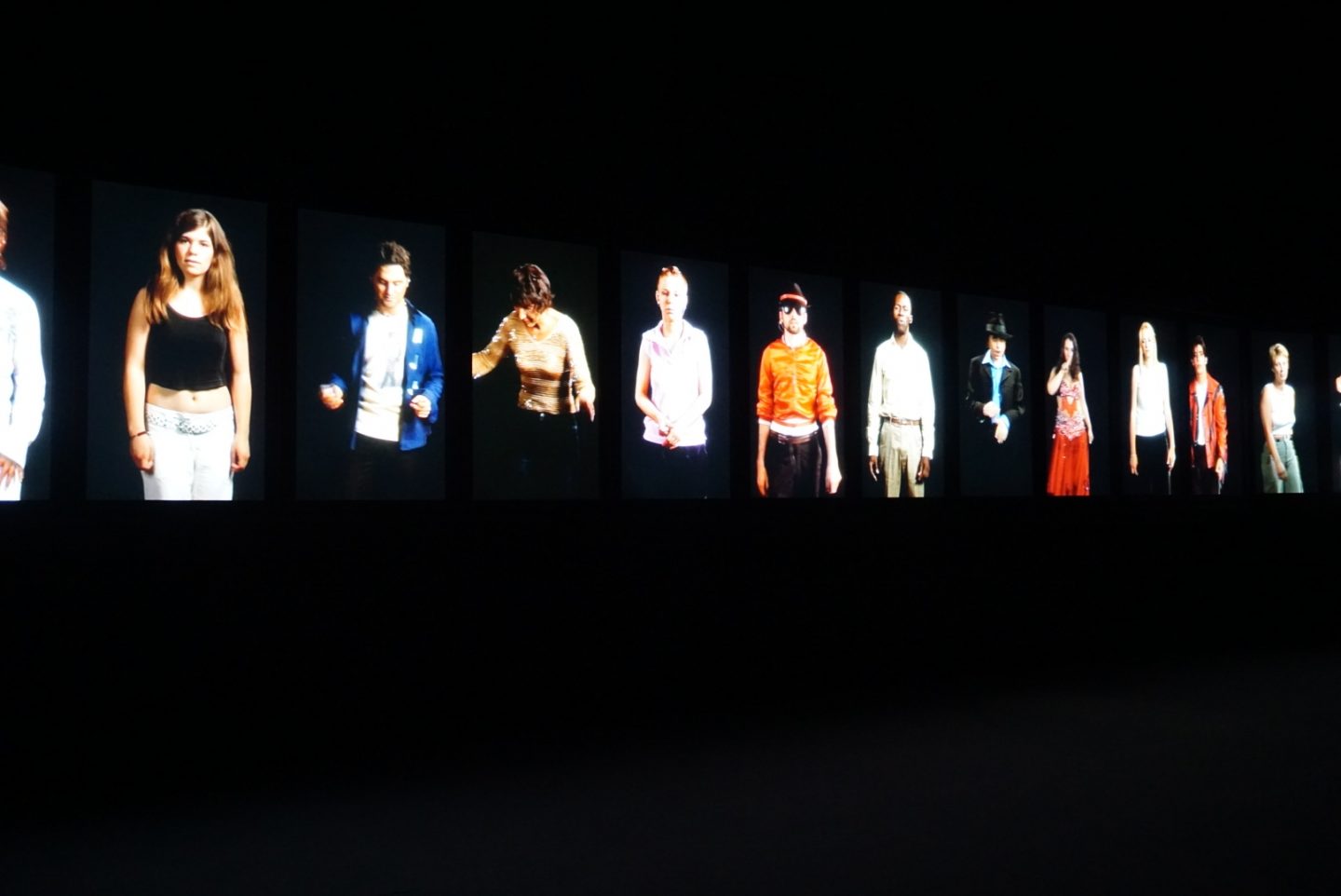 It was the other visitors – the people.

I know how hard museums work to be more representative, and this exhibition is a masterclass in inclusion. Without doubt, this audience was the most ethnically- and socially- diverse group I have ever seen in any museum visit. During my short visit I’m sure I saw families with younger kids, dating couples, teenagers, grown children with grandparents, an openly gay couple, people with disabilities, singles, tourists, Londoners, and that group of 20 somethings who wouldn’t have seemed out of place on a hen do. It was the sort of mix which gives London its energy but which doesn’t always get past the hallowed doors of a cultural institution. But when it does – boy can you feel it!

The exhibition is not without faults. The light coloured text on the lights walls is practically unreadable, for these nearly 40 year old eyes at least. The quality of the art did vary, at times bordering almost on fan art. I expected more reflections on the controversies which surrounded Jackson and his unconventional life, but with Sony as main supporter, this is unsurprising. 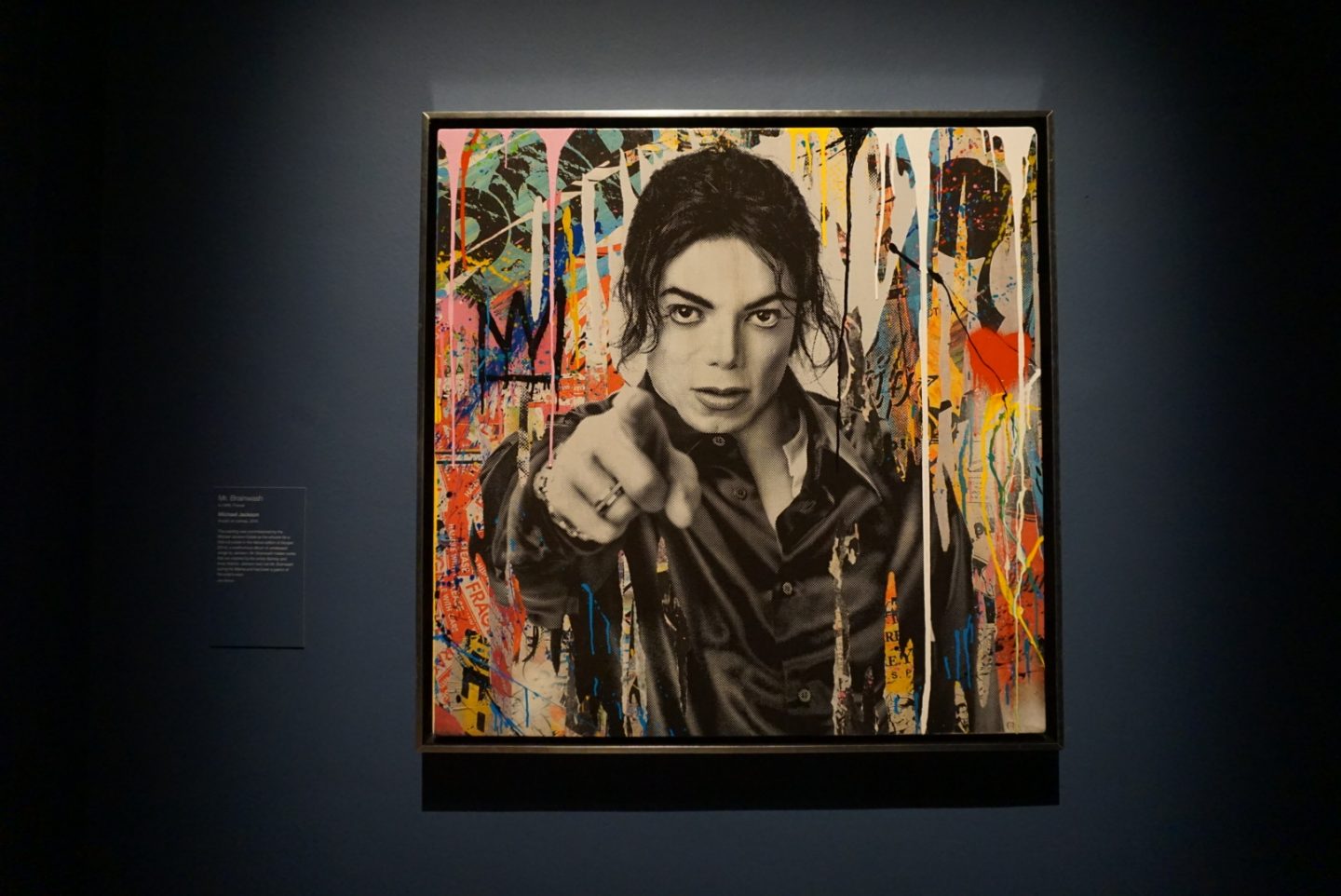 But I’ve picked the nits, and what’s left is a stonking good show, one that every museum could learn from. It’s a lesson in how to create exhibitions with mass appeal which still have curatorial weight. Hats off, NPG *throws hat in air, spins, and tries to catch in an MJ-inspired move*.

Michael Jackson: On the Wall runs until 21 October 2018 at the National Portrait Gallery, London
www.npg.org.uk/michaeljackson
Tickets from £15.50, children under 12 FREE.

And if you don’t get a chance to catch Michael Jackson: On the Wall in London, the exhibition will tour to the Grand Palais, Paris (November 2018 to February 2019), The Bundeskunsthalle, Bonn (March to July 2019) and Espoo Museum of Modern Art, Finland (August to January 2020).