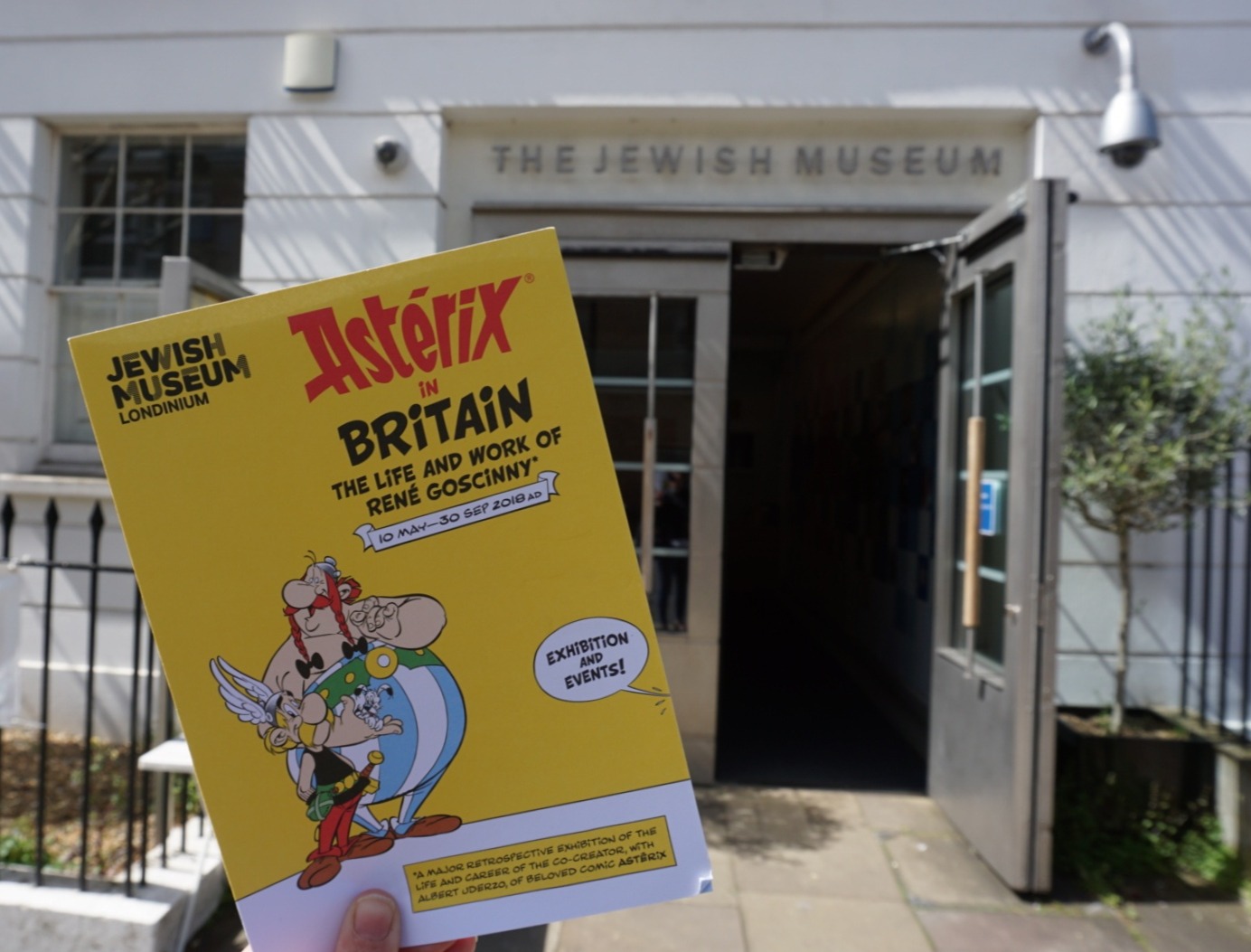 Asterix – at the Jewish Museum? The cartoon escapades of the plucky Gaul resisting Roman occupation have delighted countless people around the world since his first appearance in 1959. Asterix has sold over 500 million books, been translated into 150 languages, and featured in 100 film adaptations. Given this enormous and enduring popularity, it seems remarkable that Asterix’s co-creator, writer René Goscinny, remains such an enigma.

Until now that is, thanks to a major retrospective on Goscinny’s life and work at the Jewish Museum in London. With over 100 items on show – from personal belongings and early family photographs to original artwork and comics – it’s impossible to walk away without knowing more about the man behind the work. 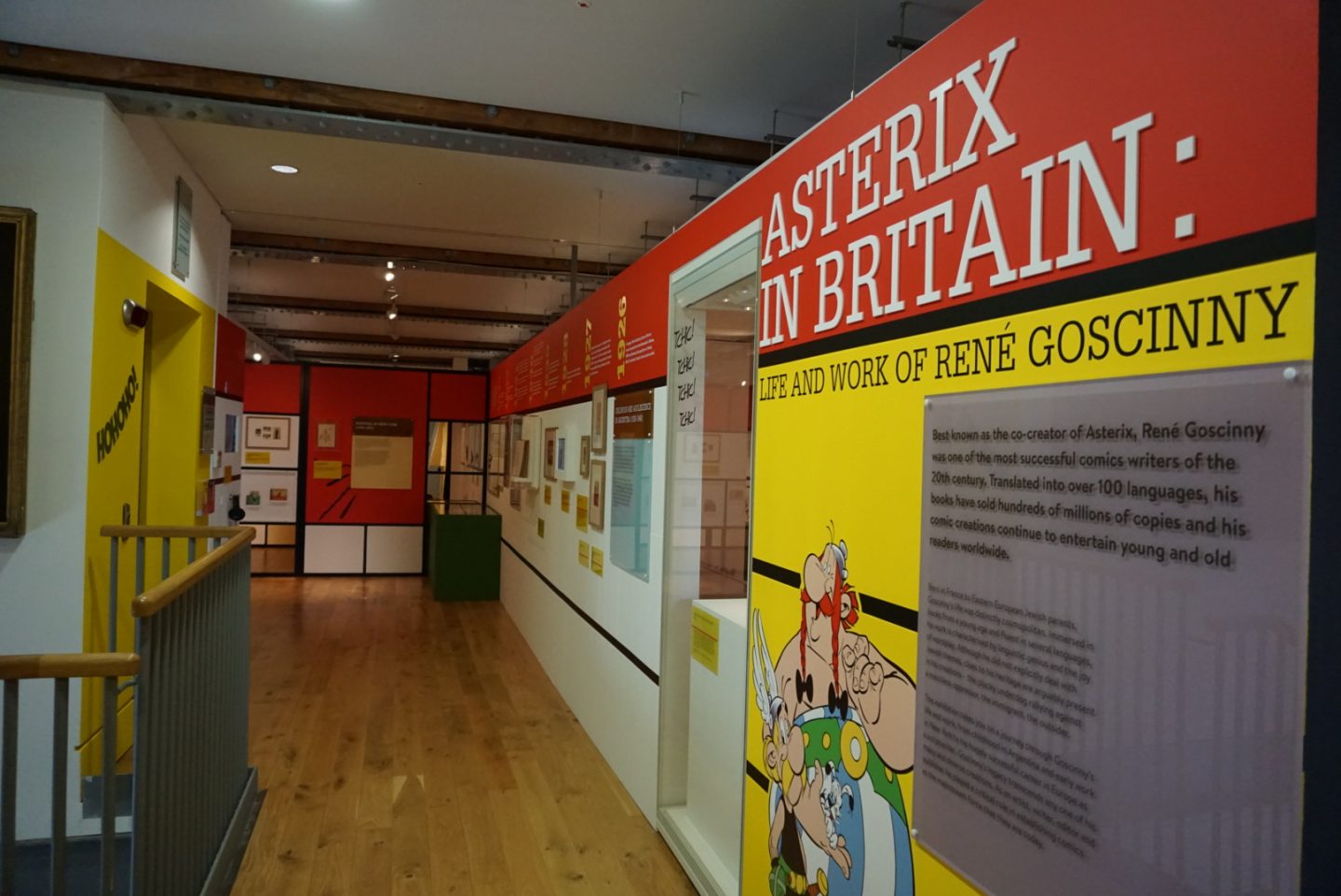 And what a fascinating life Goscinny had. Born in Paris in 1926 to Eastern Europe Jewish parents, he spent much of his childhood in Argentina. His father worked for the Jewish Colonisation Association, helping Jews persecuted in Russia to establish agricultural communities in the Americas. The young Goscinny dreamt of working for Walt Disney one day, but when his father died suddenly, he was forced to start work aged 17 to help keep his family financially afloat.

Goscinny lived in New York, Belgium and France, working as a book illustrator, artist and union agitator before becoming a script writer. It was in Europe where he met the Uderzo, and they collaborated on numerous comics before creating Asterix for the first issue of the French comic Pilote.

As well as Goscinny’s scripts and the earliest Asterix books, the display shows his other work, including childhood sketches and comics featuring his other characters such as Lucky Luke. 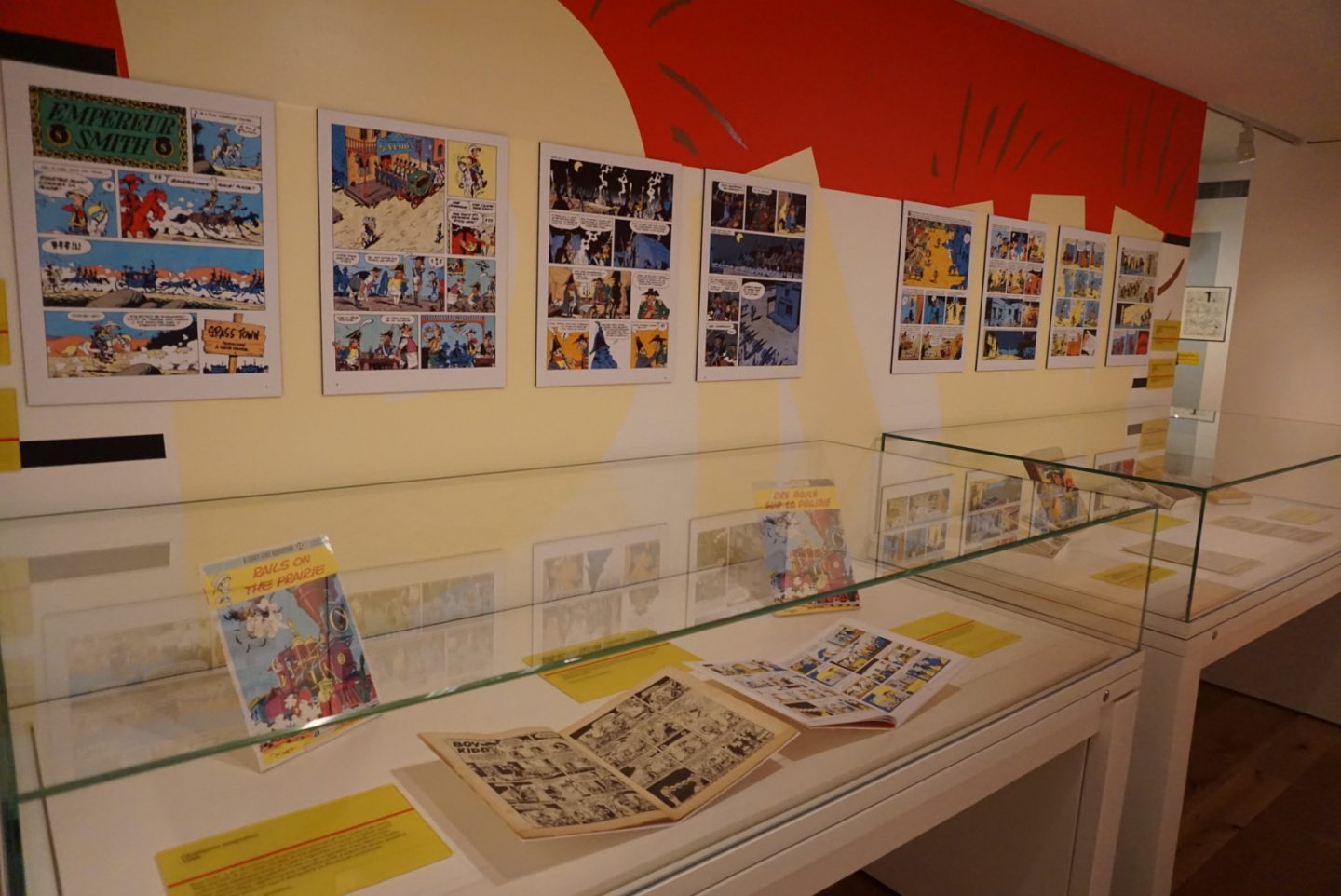 His caricatures of Churchill, Hitler and Stalin really brought home how inescapable world politics at that time were – even as a teenager in Argentina. His father’s family in Poland were never heard from after the outbreak of the Second World War and several of his mother’s family were deported from France and murdered in Auschwitz. 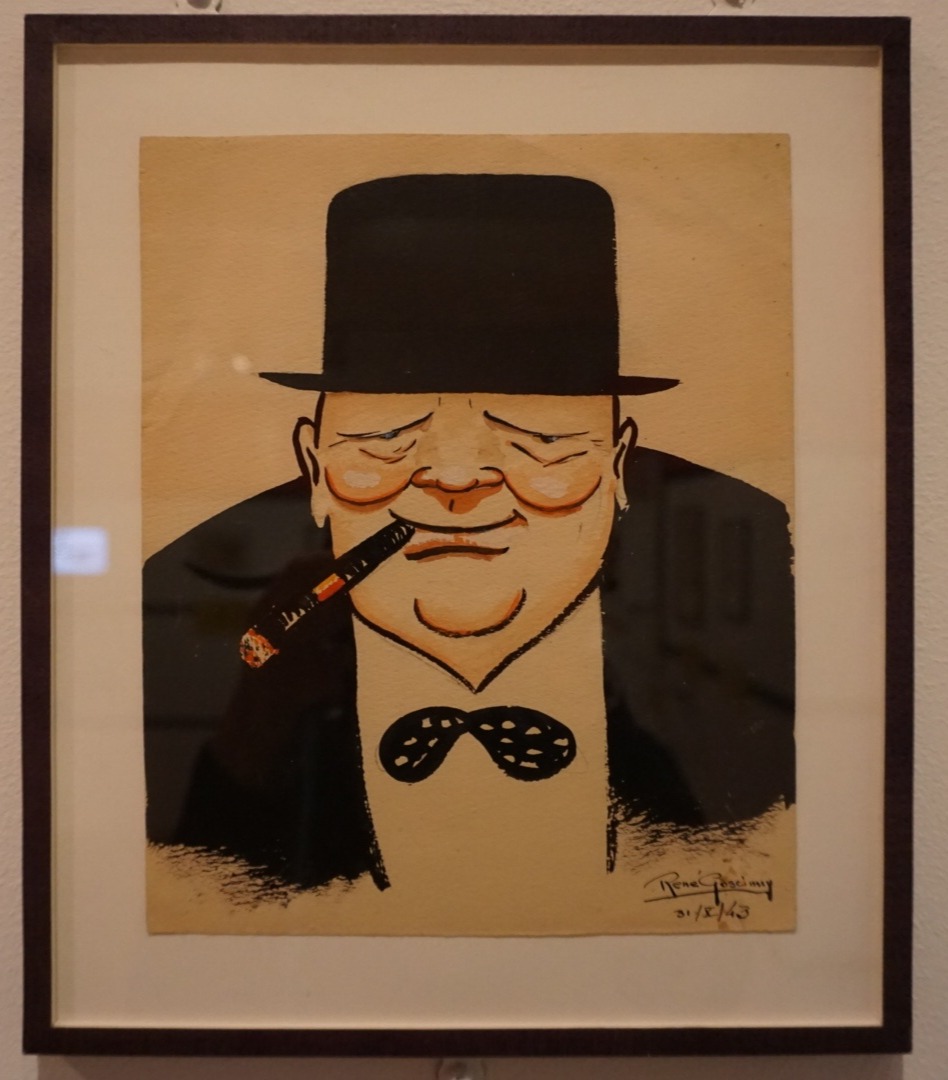 I loved seeing Goscinny’s trusty typewriter, which he used throughout his life. Bought in New York, he had to change the order of some of the keys to make it more suitable for writing in French, and it had one major fault – it had no exclamation marks! To make his point, Goscinny had to improvise with an apostrophe, back space and full stop. I’m wondering if any writers or bloggers today would put up with three key strokes to punctuate their thoughts – our 10 year old Mac had no hashtag and I practically danced with joy when it finally gave up the ghost.

Something I hadn’t thought about before the display is the role of the translator in keeping texts in other languages as true to the original as possible. Goscinny’s clever use of French puns, humour and cultural references meant that many English publishers feared Asterix was untranslatable. It took 8 years and a British woman, Anthea Bell, before the first official English version appeared in 1969. An earlier translation of Asterix for an English comic transformed Asterix and Obelix into ‘Little Fred and Big Ed’. Thank goodness that idea never caught on! 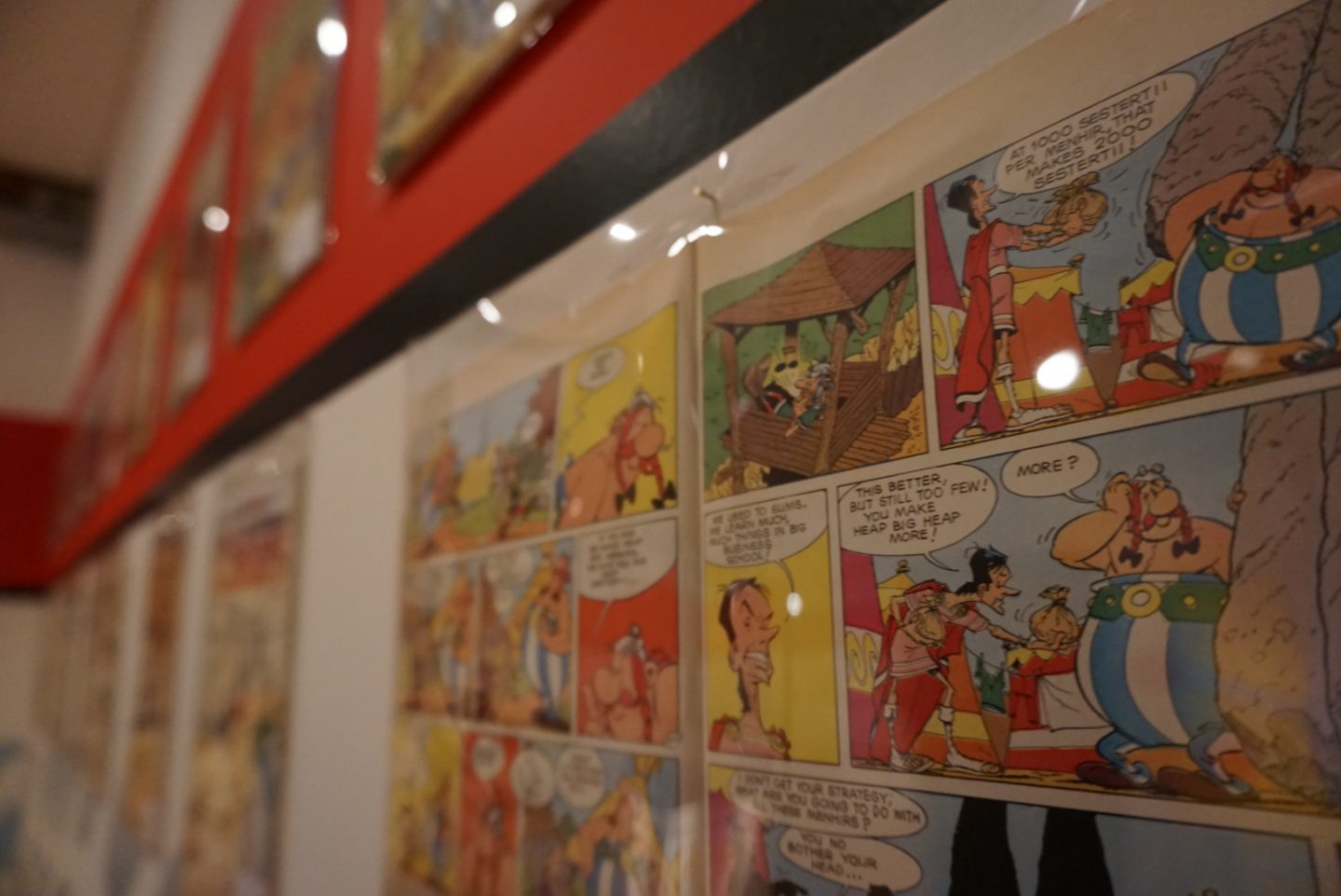 I also discovered the Goscinny turned to the use of magic potions to settle conflict in his Roman Empire as the French government had censorship laws restricting the depiction of violence. So one of the reasons I most enjoy reading Asterix with Museum Boy – its lack of violence – is all because the French wanted to restrict popular American comics from flooding their newstands.

What about the kids, Museum Mum? Asterix in Britain will appeal most to adults or older children who can read by themselves, say age 8+. But even with younger children it is still worth a visit. With blocky primary colours the exhibition is just like stepping into a comic – that is, if modernist artist Mondrian ever designed one. 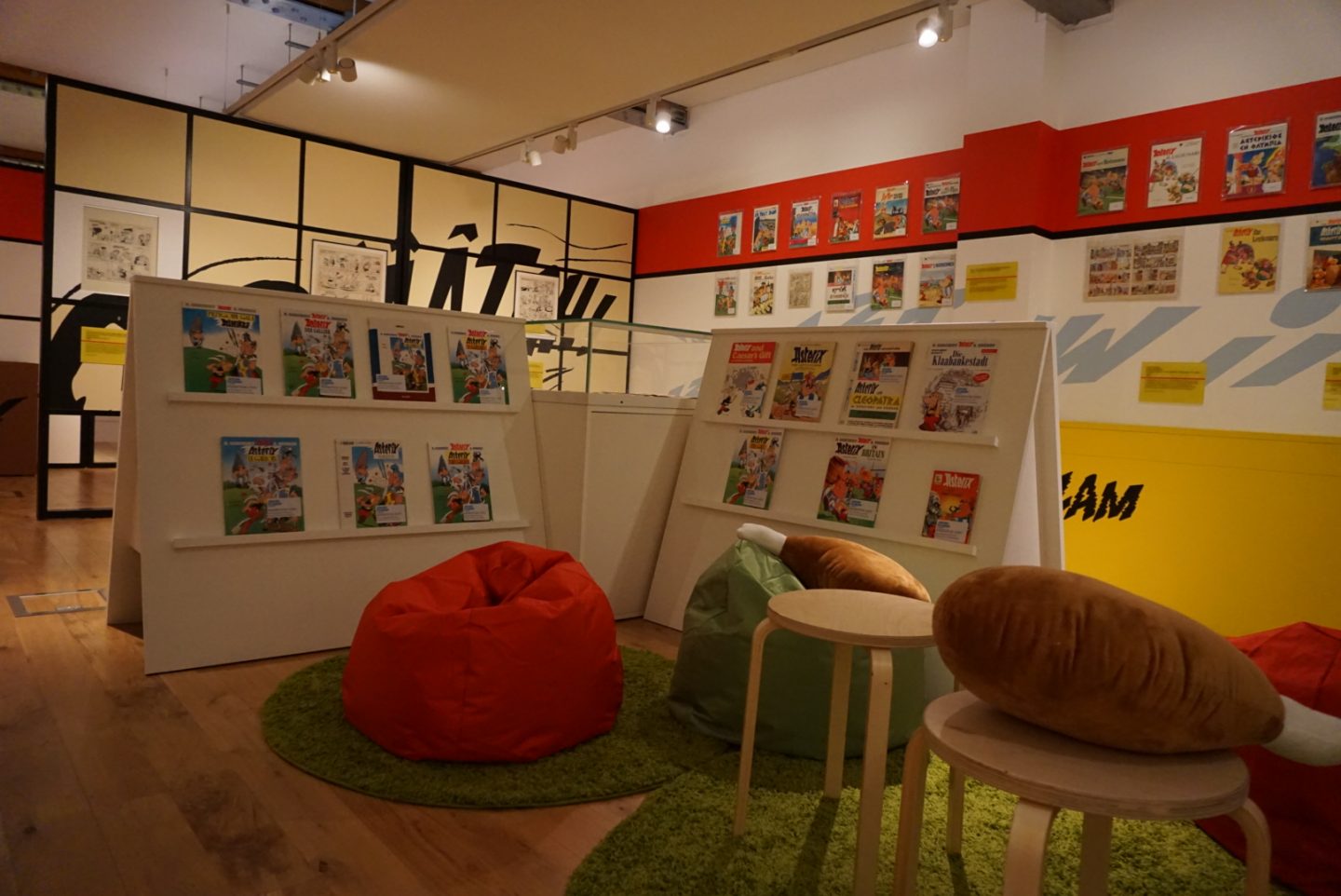 At the heart of the exhibition is dressing up, a cozy reading area, and, most excitingly, a photo luminescence screen. I had a little too much fun creating shadow Museum Mums, which rapidly got a little weird and, er, stabby. 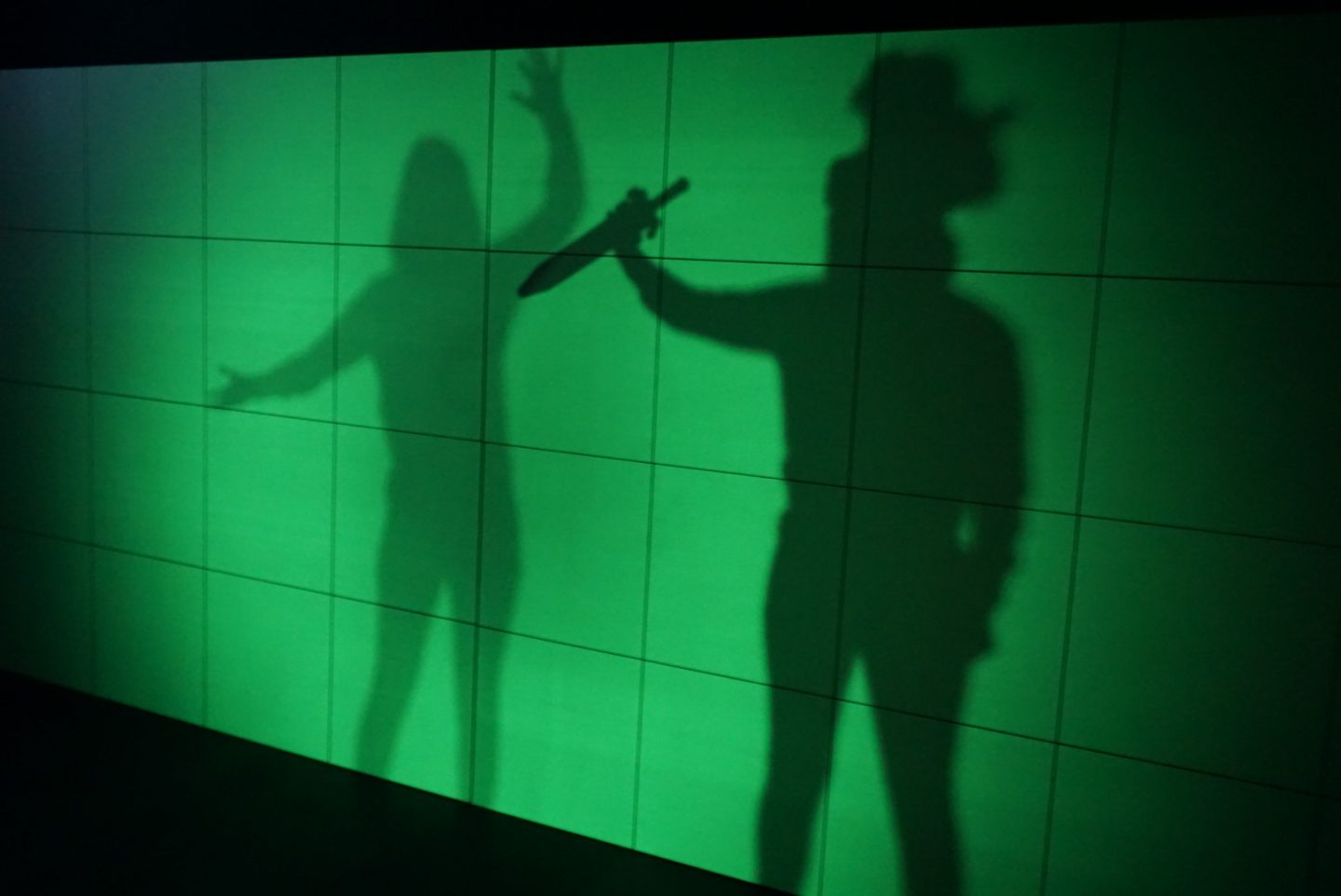 Six year old Museum Boy would quite happily plonk himself on one of the bean bags to read Asterix with me. A nice touch is that the drawing station has real artworks framed above it, and the exhibition ends with a whole wall that visitors can scrawl their comments on.

I highly recommend visiting the Jewish Museum on one of their family days, listed below. Last year we enjoyed live music, tile decorating, face painting, and biscuit making, all at no extra cost. Clearly lots of other families love it too as it was shortlisted for the Family Friendly Museum of the Year Award 2017. At £20 for 2 adults and up to 4 children, their family ticket is good value (not quite good enough to convince me to have number four, mind).

So, a bright, colourful treat for Asterix fans young and old in a family friendly museum – I think you have all the ingredients for a magic day out.