My best family experiences are those where I’ve learnt something new about ourselves. Our recent trip to Mechelen in Belgium gave us one such experience – in the unexpected shape of a very high tower!
St Rumbold’s tower, part of the Cathedral of the same name, is one of the highest church towers in Belgium. It was impossible to miss on our first day in Mechelen – not only because of its imposing height, but also because of the distinctive sound of its bells. They played complex and beautiful music for almost an hour whilst we enjoyed an ice-cream in the nearby main square. 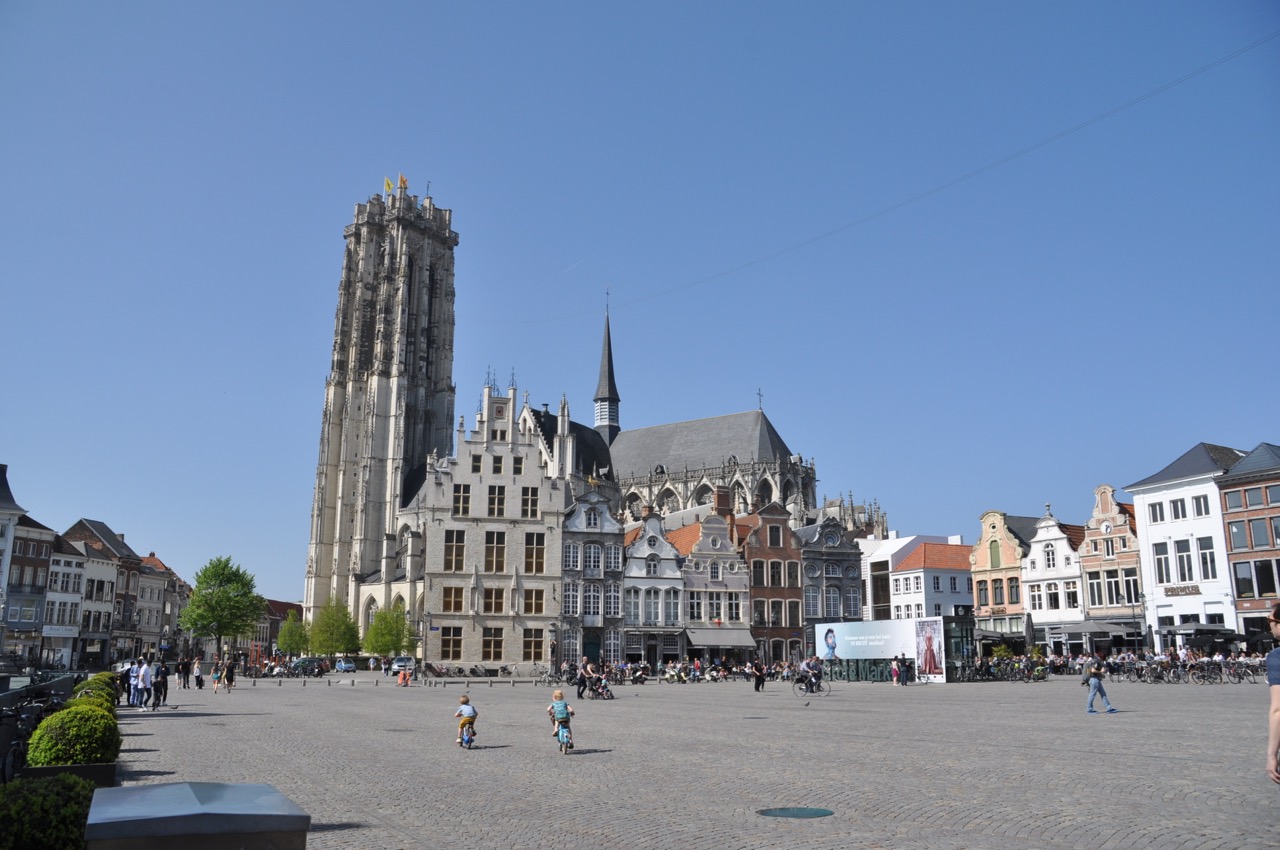 The next day we returned to Mechelen, hoping to climb the tower. Letting our son guide us there from the car park was probably a mistake. He took very pretty but long detours along the canal, looking for playspaces on the Mechelen play map (of which more in a future post). By the time we approached the cathedral even the adults were tired – and Museum Boy was sat in the buggy, looking exhausted. Oops. 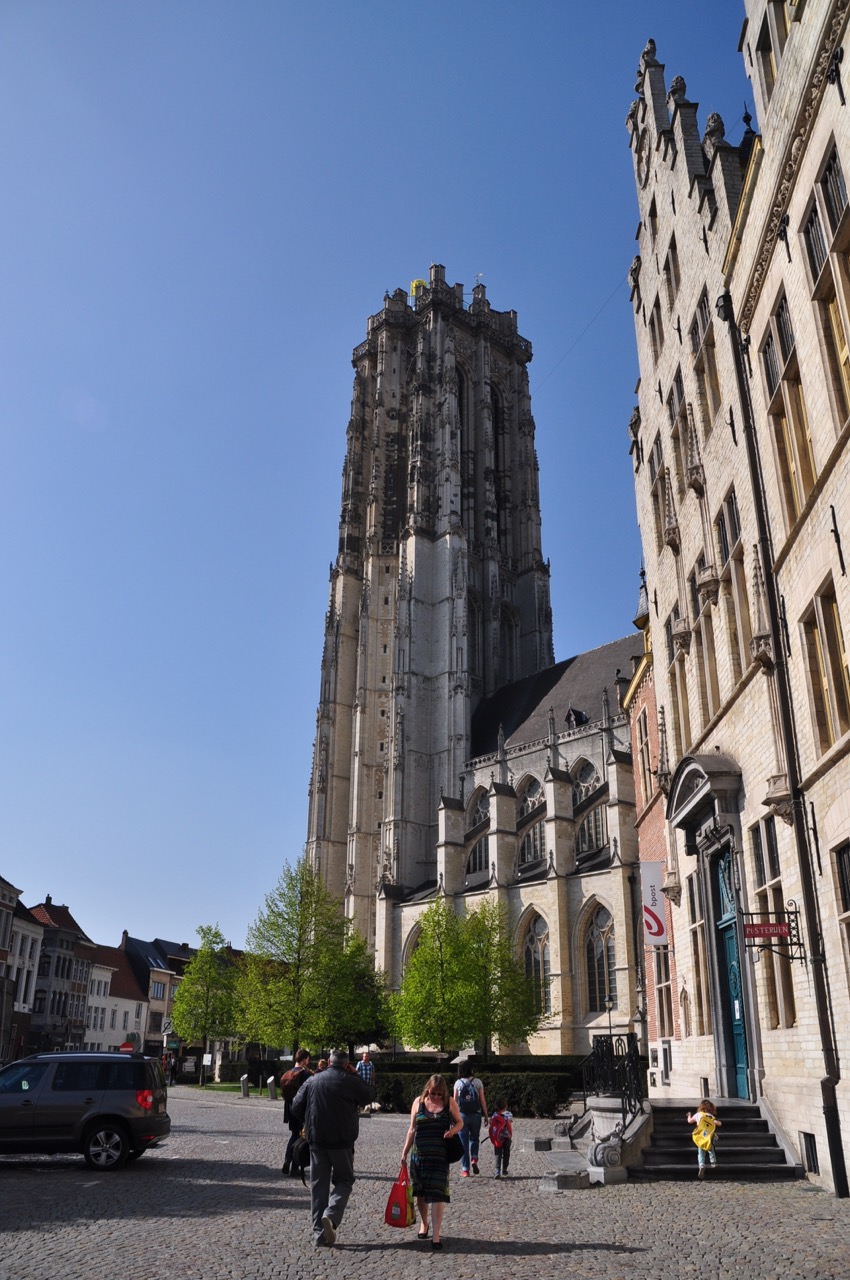 When we asked Museum Boy if he would like to try and climb the ‘ginormous’ tower (his new favourite adjective) I didn’t hold out much hope. I thought it would go on the ever increasing ‘things-I-really-wanted-to-do-but-the-kids-weren’t-in-the-mood-so-we-didn’t’ list. Even when he hollered ‘YES!’ and shot out the buggy we weren’t quite sure how far up the tower we would get. And for good reason. After all, is climbing a 97 metre tower with 538 steps really a suitable activity for a four and two year old?
Buying the tickets quickly before the doubts set in too firmly, I was pleasantly surprised by their family ticket pricing. Families get a 20% discount off the total price of the tickets, for up to 2 adults and up to 4 children, instead of the standard 2+2 which never quite works for us. This is one of the simplest and most welcoming family pricing structures I’ve ever seen, meaning families of almost all sizes get discounted entry. Museum directors nationwide, I hope you’re reading this.
We began our preparations for the epic climb in the time honoured family way – with a trip to the toilets. Unsurprisingly, there are no public toilet facilities inside the tower, so we popped into the main Cathedral to use theirs. And I’m really glad we did! 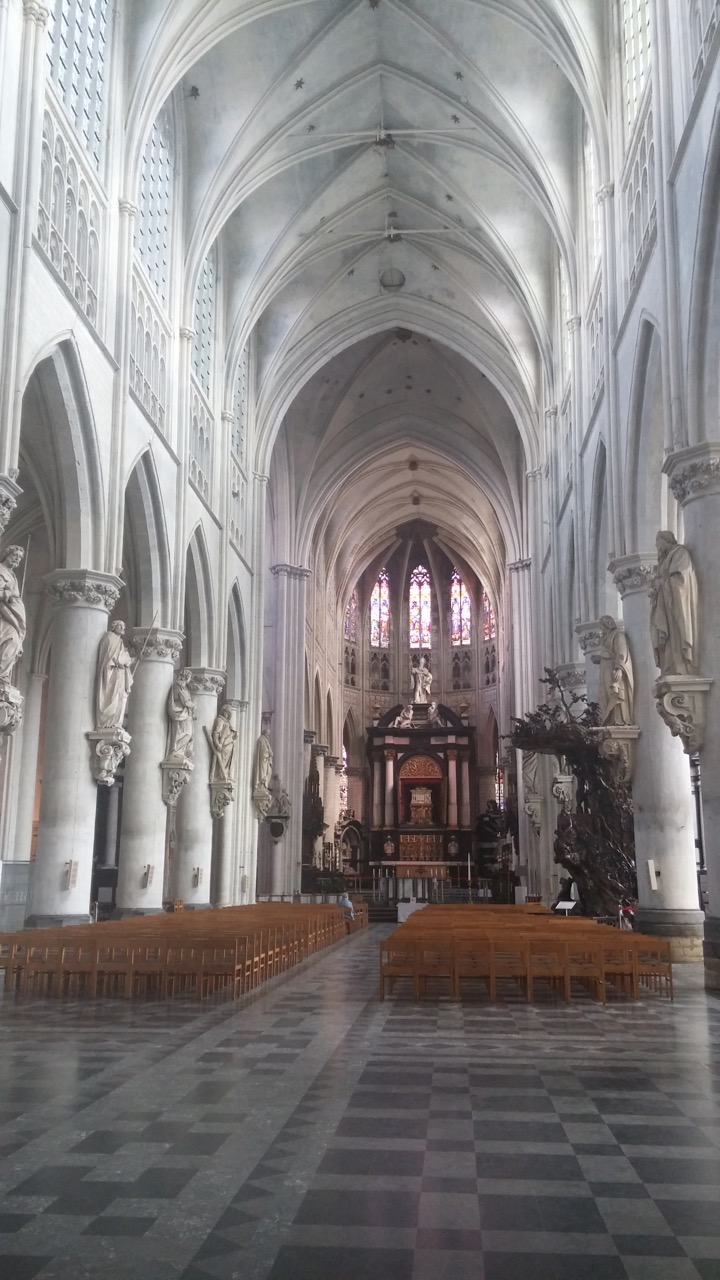 We found lots out about the impressive Cathedral thanks to the free child’s activity sheet, available in English and 4 other languages. St Rumbold was a preacher from Ireland who saved a young boy from drowning in the river during his stay in Mechelen. Rewarded with a small bag of gold, he built a small church. One day two robbers killed Rumbold, tossing his body into the river. Soon several miracles started to happen near the body. The next day his body was found in the church, confounding the locals. Rumbold was proclaimed a saint, and his tiny church was transformed into a large cathedral. When work began in 1452 the tower was meant to be 167 metres high, but was never completed – hence the strange flat top.
The activity sheet really appealed to Museum Boy – he searched for Saint Rumbold’s statue and carefully paced out the length of the Cathedral, as suggested. 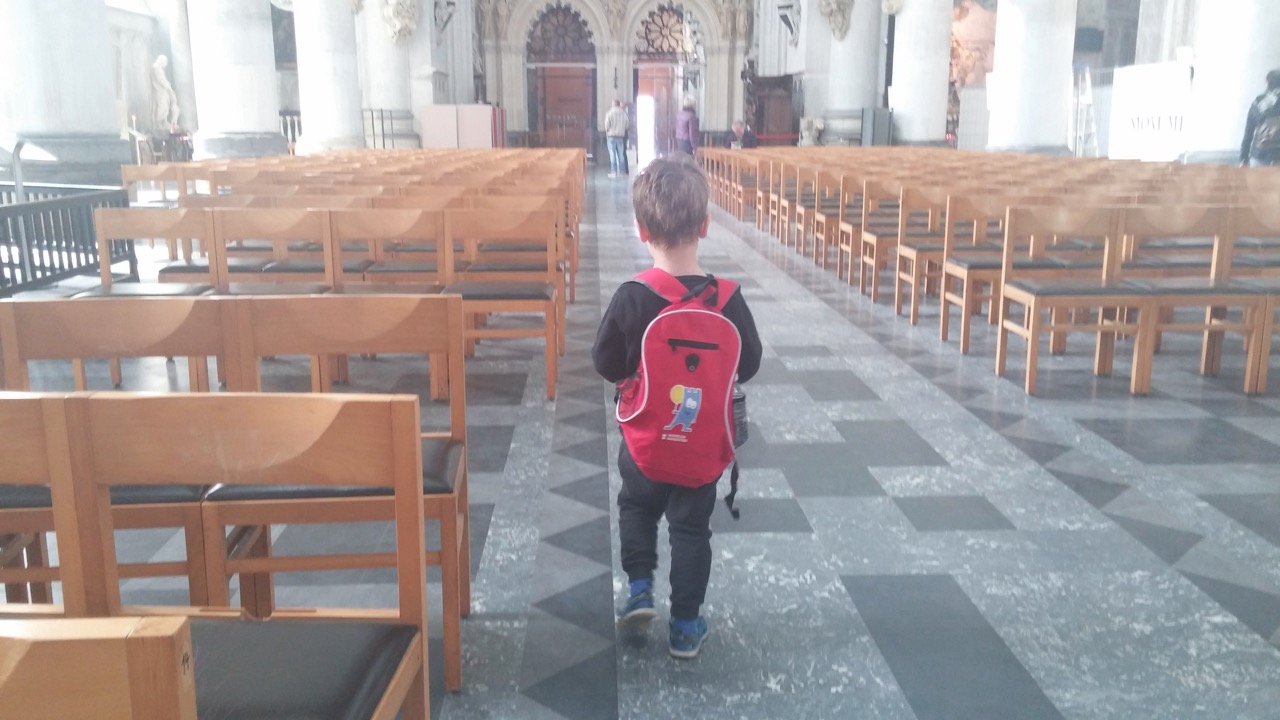 (Incase you’re wondering, it’s a gazillion steps long. Which is just after 204, as I discovered).
By now, Museum Boy was raring to climb the tower. So raring that he not only entered but immediately exited the automatic gate, setting the alarms off *sigh*. Once the sirens ceased, and we were let in properly, we began a rapid climb up the spiral, stone staircase, worn from centuries of use. 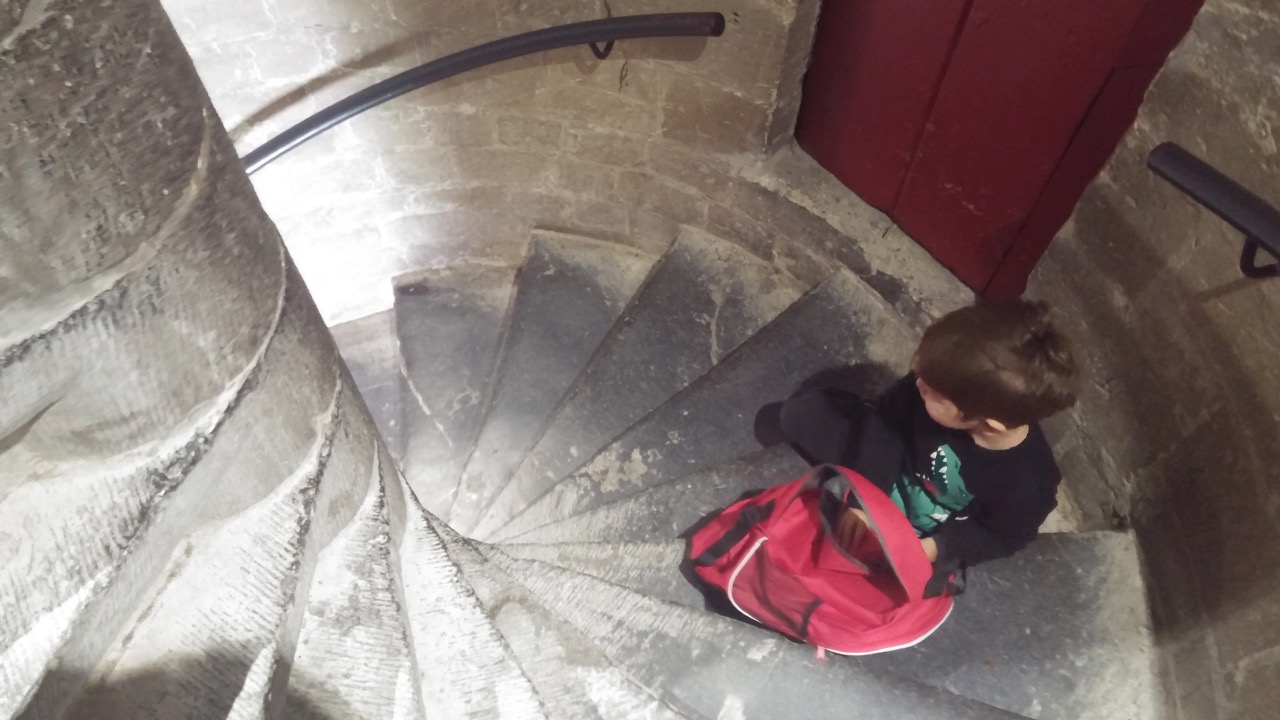 MB was literally unstoppable – this is the only photograph I have of him climbing the stairs where he isn’t a blur! You don’t have to climb all 538 steps in one go – there are six different floors you can stop off at to see different chambers. However, many of these are optional – and as MB was choosing NOT to stop we had little choice but to race on after him!
We missed out on the first break – the Crane Chamber at 160 steps. This includes a human-powered crane for up to 3 people to haul all the building goods needed to construct the tower. You can also peer giddily onto the church and organ below.
I got to literally poke my head in at the second break – the Forge Chamber at 233 steps. A few iron bars and limestone pieces are the only reminders of its history as the smith shop for repairing the clock and bells, and it was of no interest to Museum Boy.
The stairs are numbered every 50, which not only gave us a sense of how far we had made it, but also gave Museum Boy a welcome chance to practice reading his numbers. 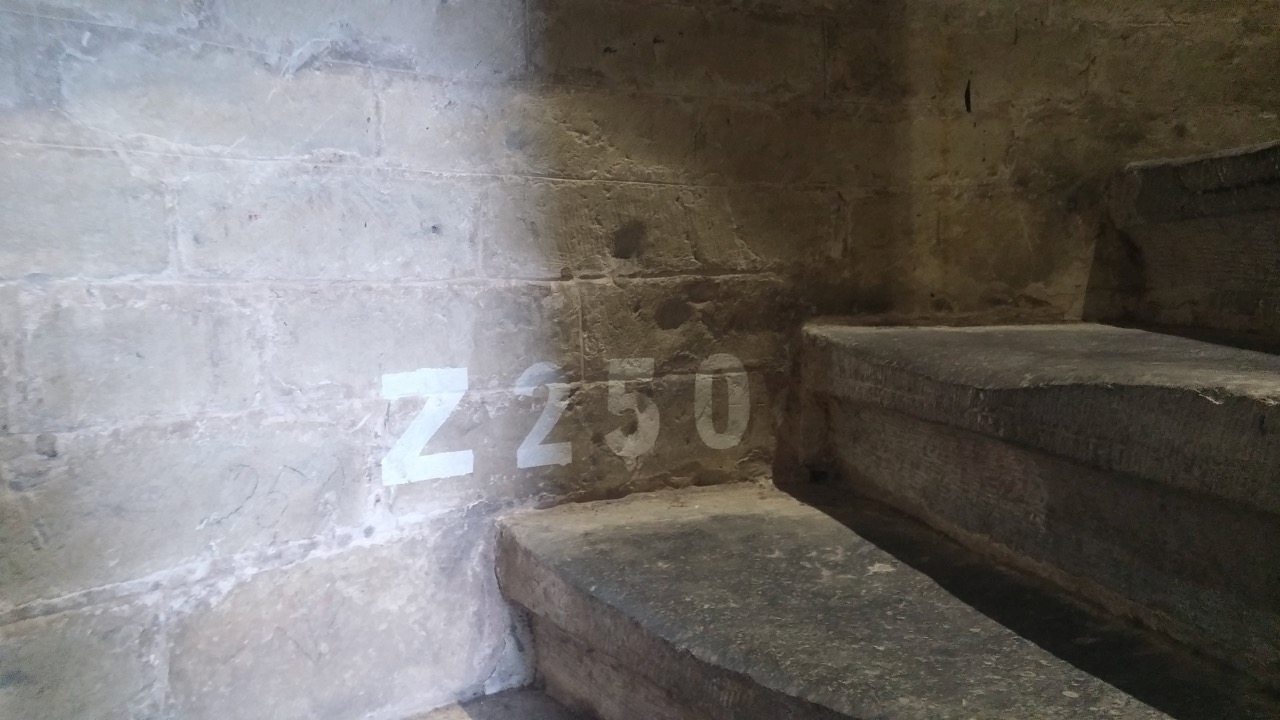 Here we are at 250 steps, almost at the half way mark (without a break!)
You might notice I’ve been focusing on Museum Boy and how well he was climbing the stairs… mainly because Museum Toddler not only expected carrying the whole way up, but thought it fun to throw herself backwards, whilst on said stone spiral staircases. Somebody give that dad a medal! 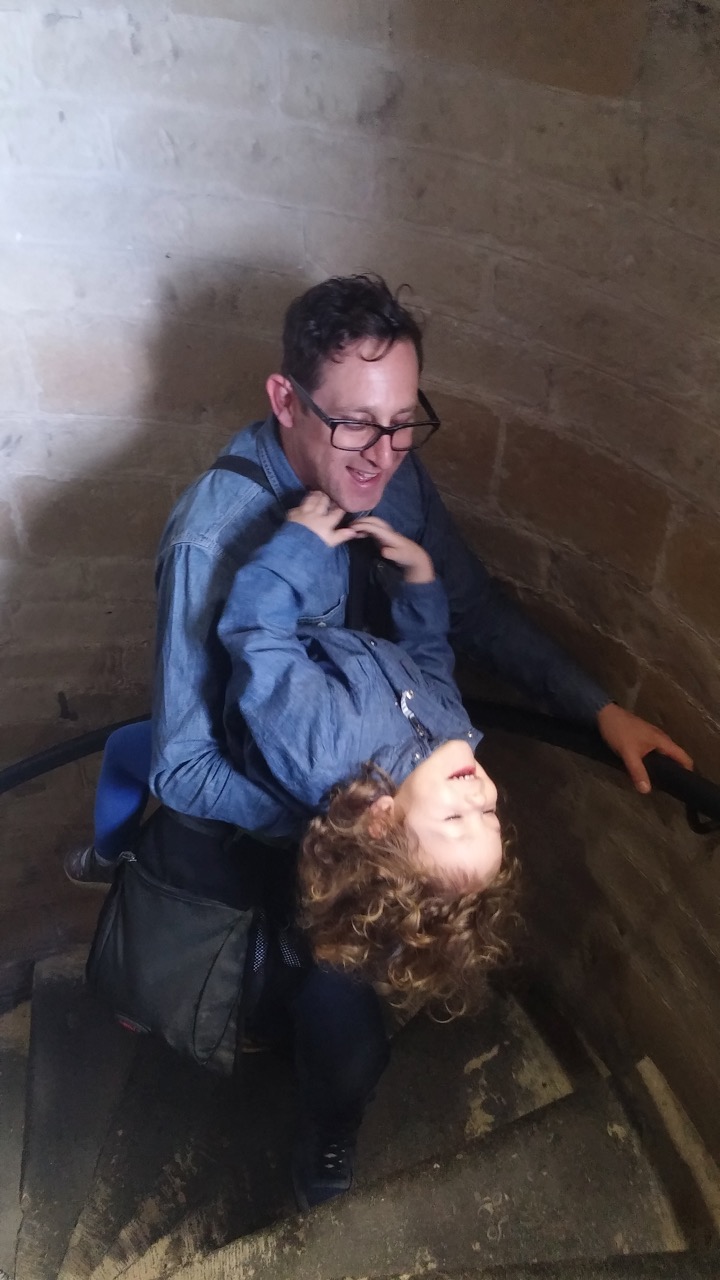 Luckily for us grown ups the next stops were not too far and a compulsory part of the route, taking us through the fascinating belfry. I’m not a campanologist – but it’s hard not to be impressed by the number and size of the bells, which vary from big to gigantic – the heaviest being 8 tons! 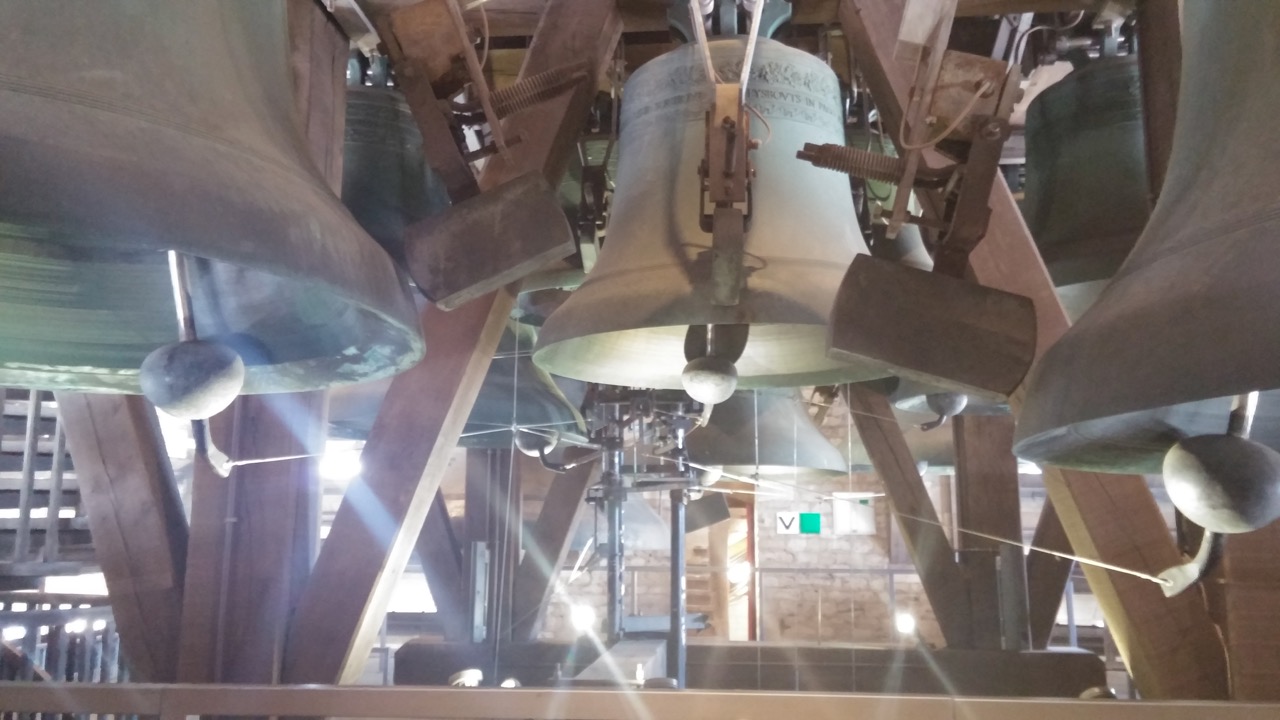 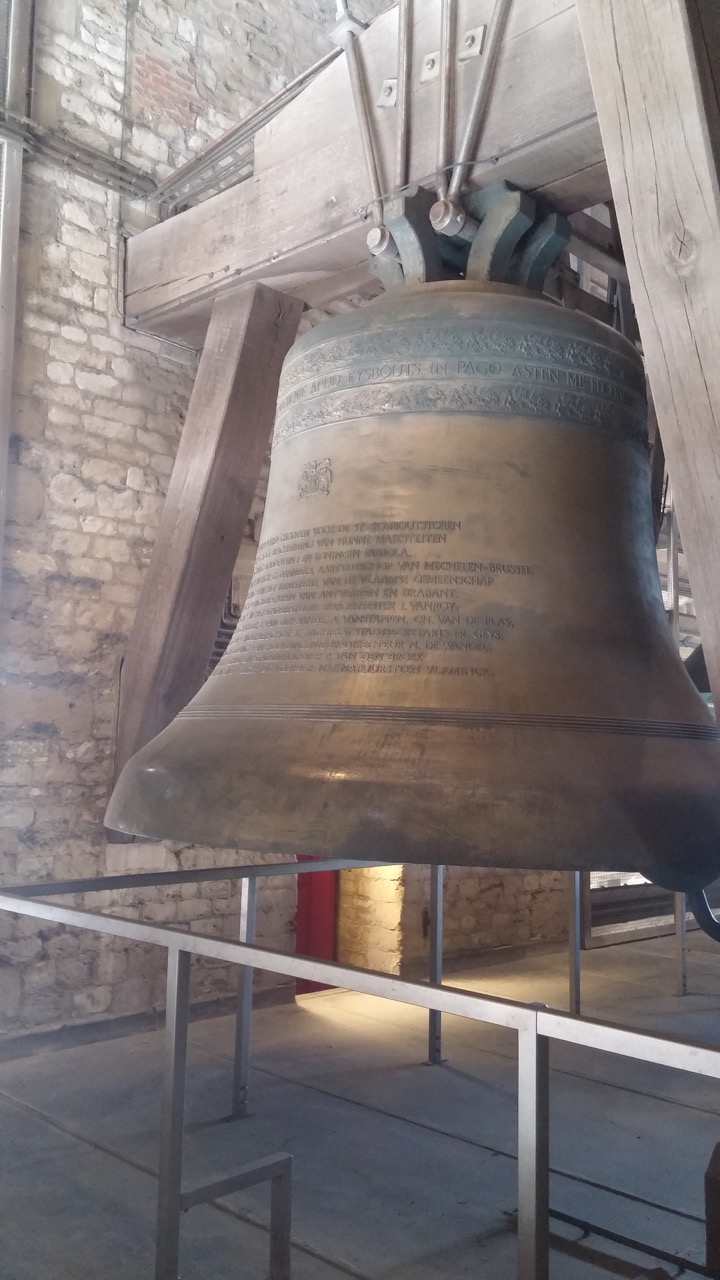 Eighteen bell ringers were needed to sound these before they were electrified. Here we also saw the two sets of carillon which had filled the market with their music the day before, and the keyboard which is used to play them. Being the only church in Belgium with two sets of carillon, Mechelen has its own carillon school with frequent concerts. 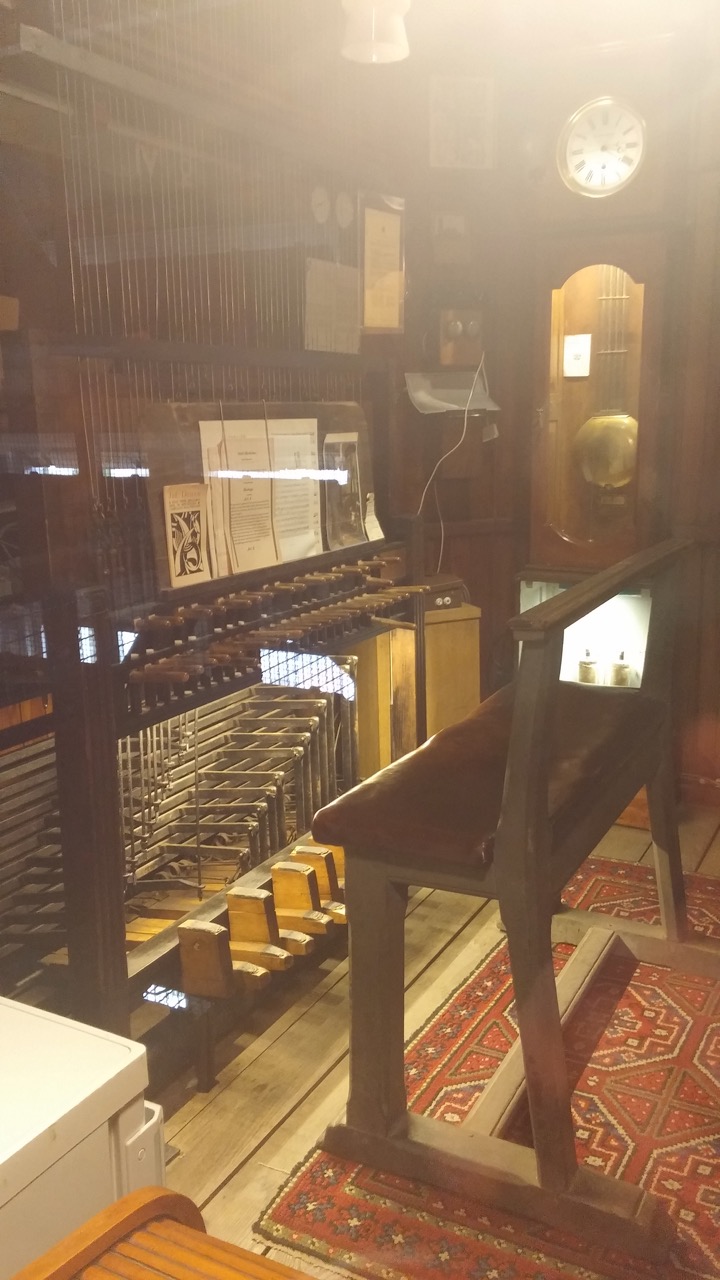 We then spiralled upwards on the internal wooden staircase to the Carillon Chamber. With the wood slightly creaking in response to our steps, my slight fear of heights kicked in. I began to wonder if it was ME who wouldn’t be able to make it to the top! 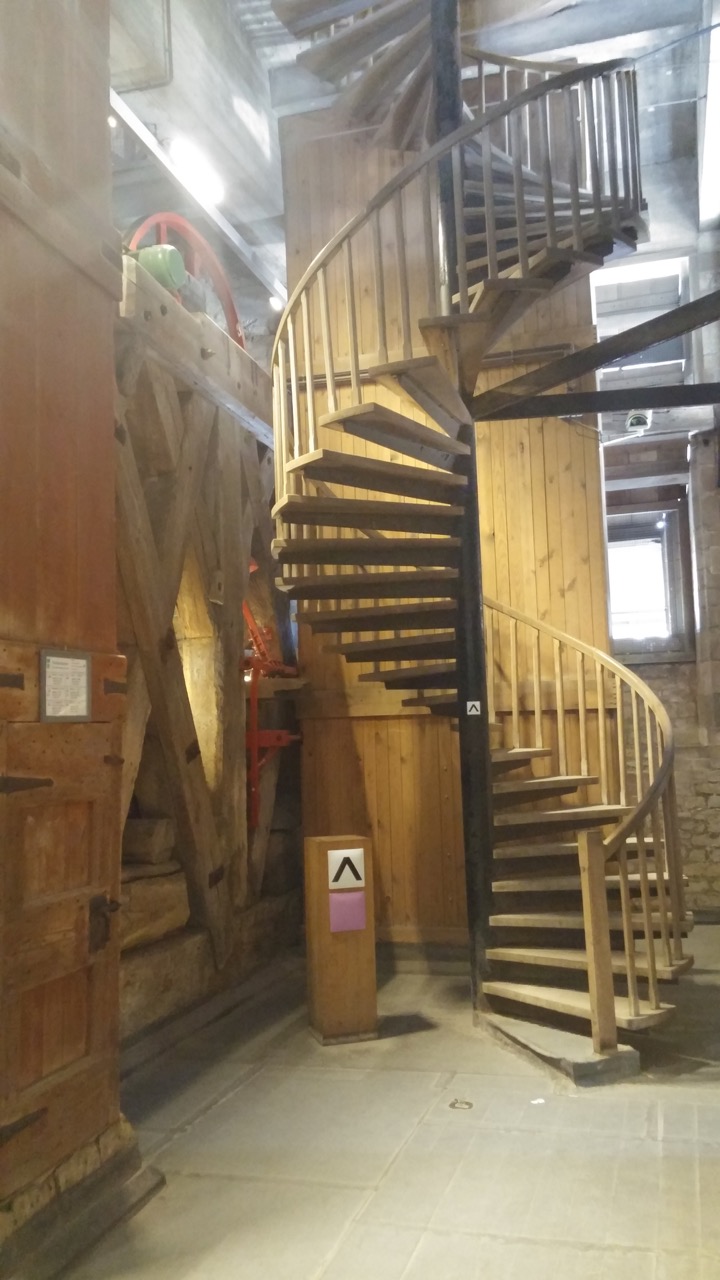 This chamber was my favourite, complete with its enormous 18th century drum with 18,000 holes filed by hand. With the use of metal pins to correspond to notes, the drum plays a tune on the carillon every 7.5 minutes, or ‘Mechelen time’. There is something a bit ‘steam punk’ about all this giant, iron, automated machinery, yet it produces soft and gentle bell music. 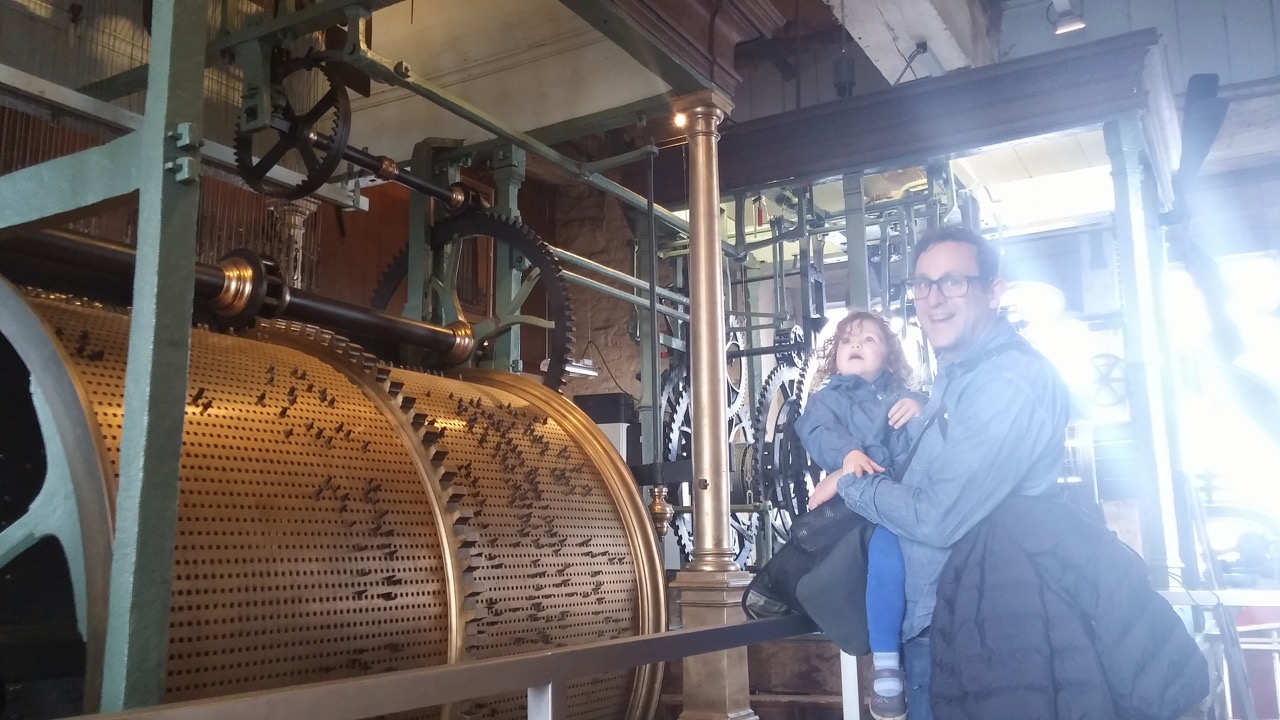 After a dash through the clock chamber, we were back on the stone spiral staircase and the end was in sight.We were firmly denied the chance of stopping at the Ash Chamber at 490 steps, but luckily it wasn’t long before we emerged onto the top of the tower.
The last few steps lead up to  the modern, glass ‘skywalk’, added in 2009 to create a spectacular viewing platform. This was the point where Museum Toddler finally decided she wanted to climb some stairs too! 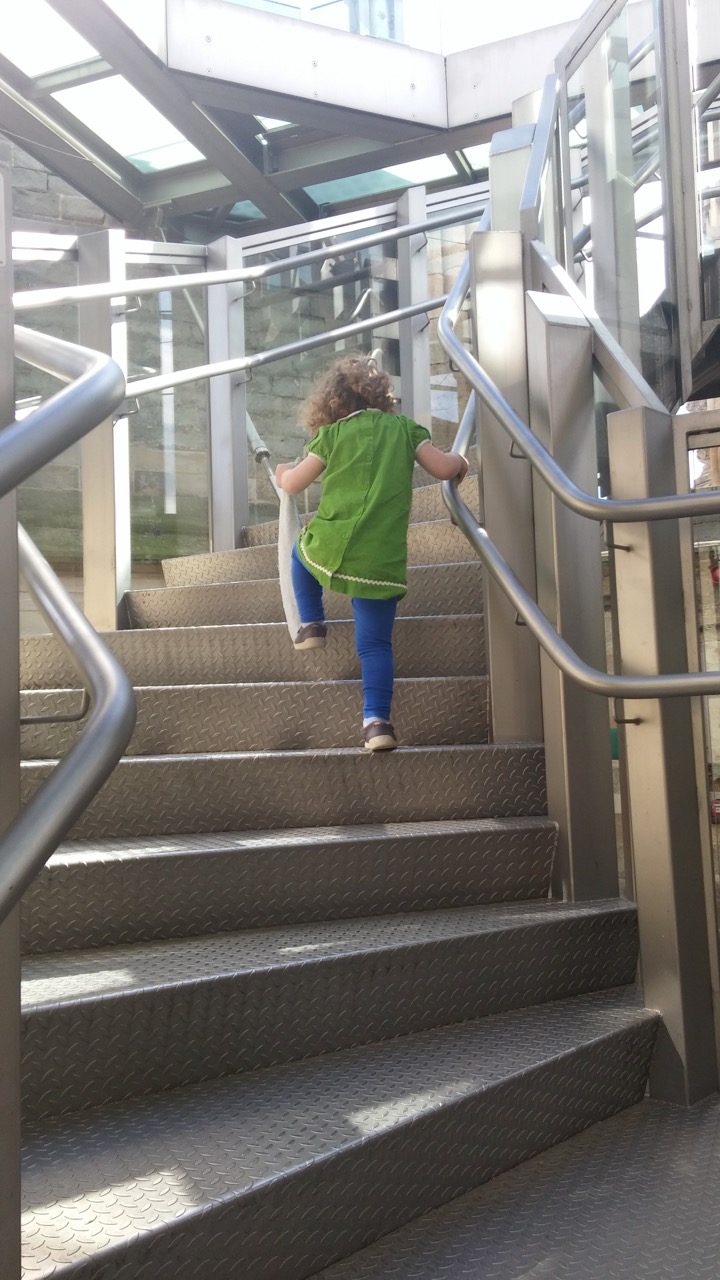 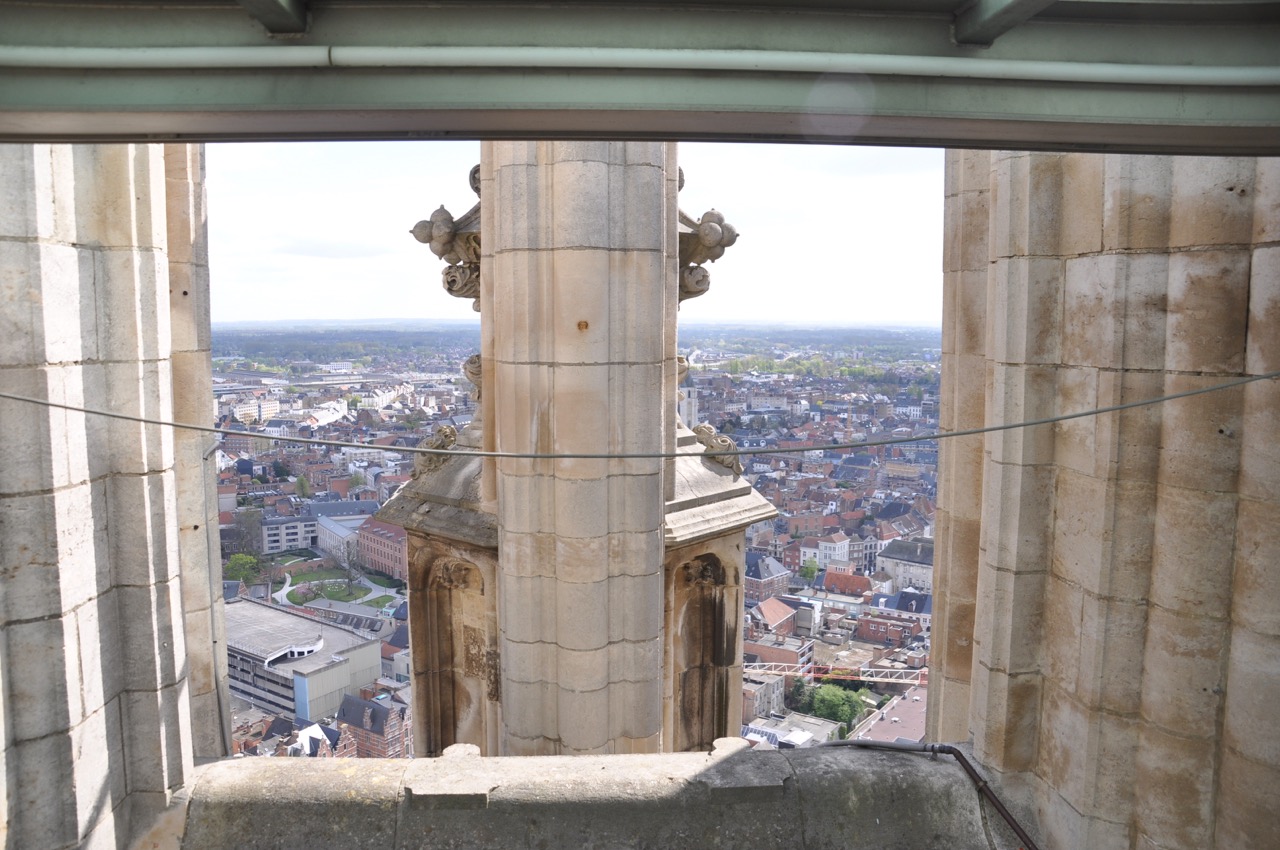 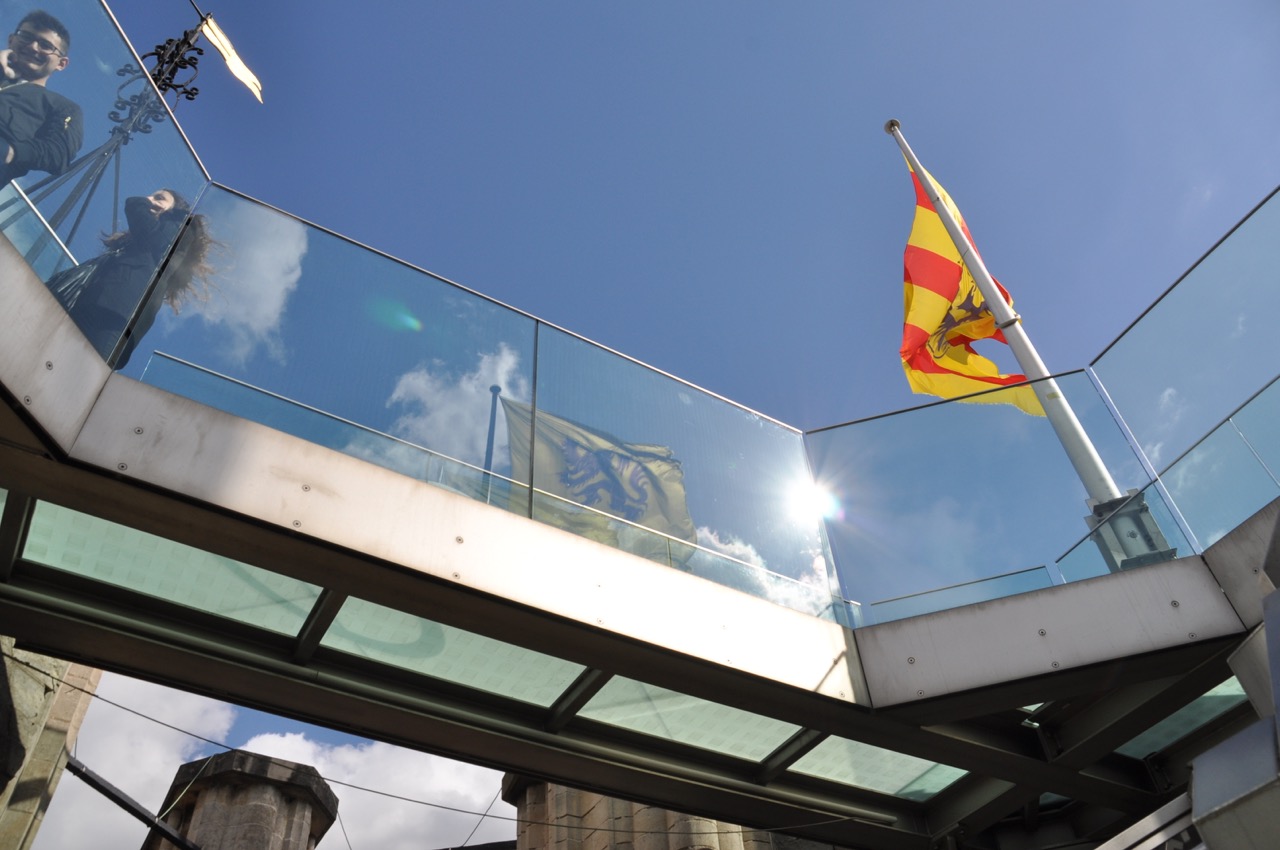 *Cue high fives and tremendous amounts of praise for Museum Boy, who had walked all 538 steps unaided!*
It was a little windy at the top, and with my *slight* fear of heights,  I had my heart in my mouth. Glass barriers were low enough for adults to enjoy an unobstructed view, whilst high enough to keep the children safe. However, with a climber like Museum Toddler I didn’t want her to stray too far. 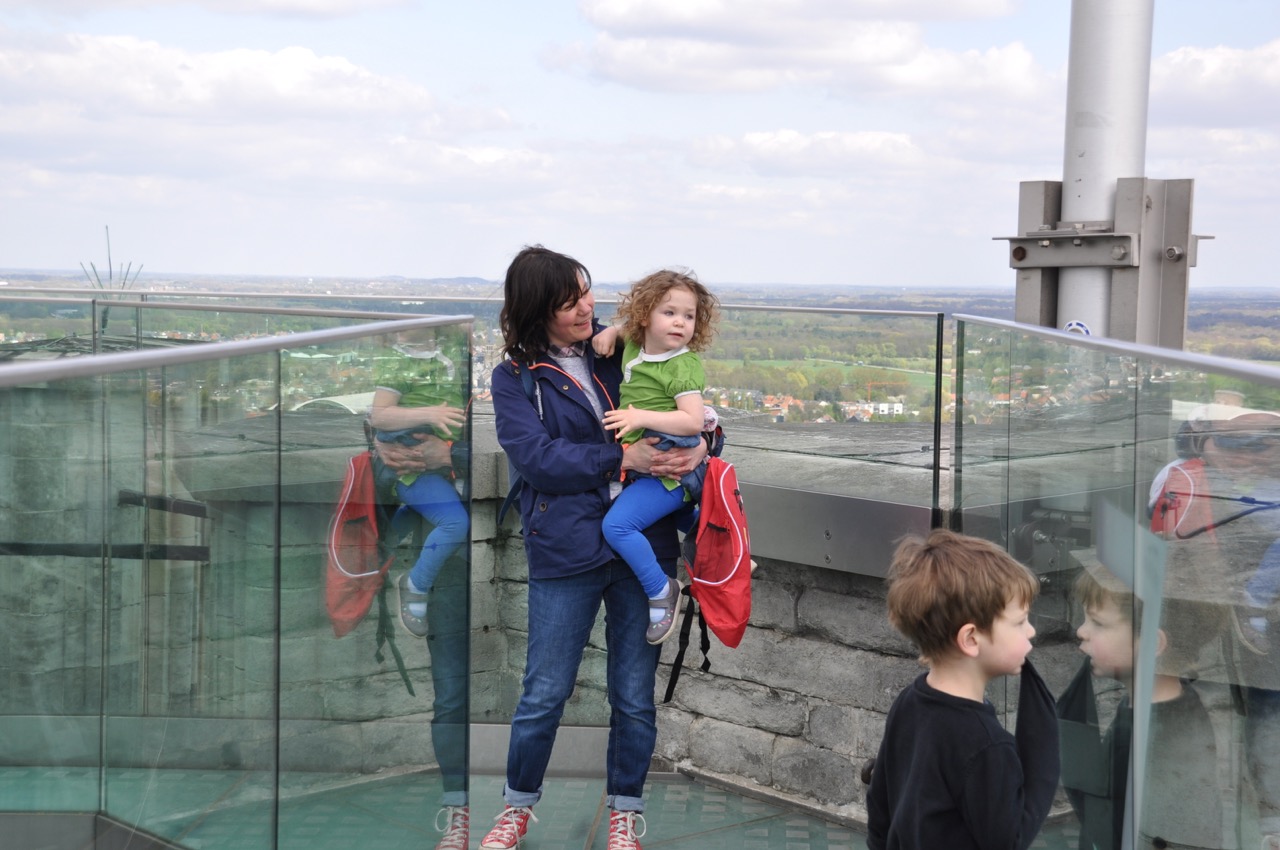 Once I got over my nervousness, we began to take in the stunning views. 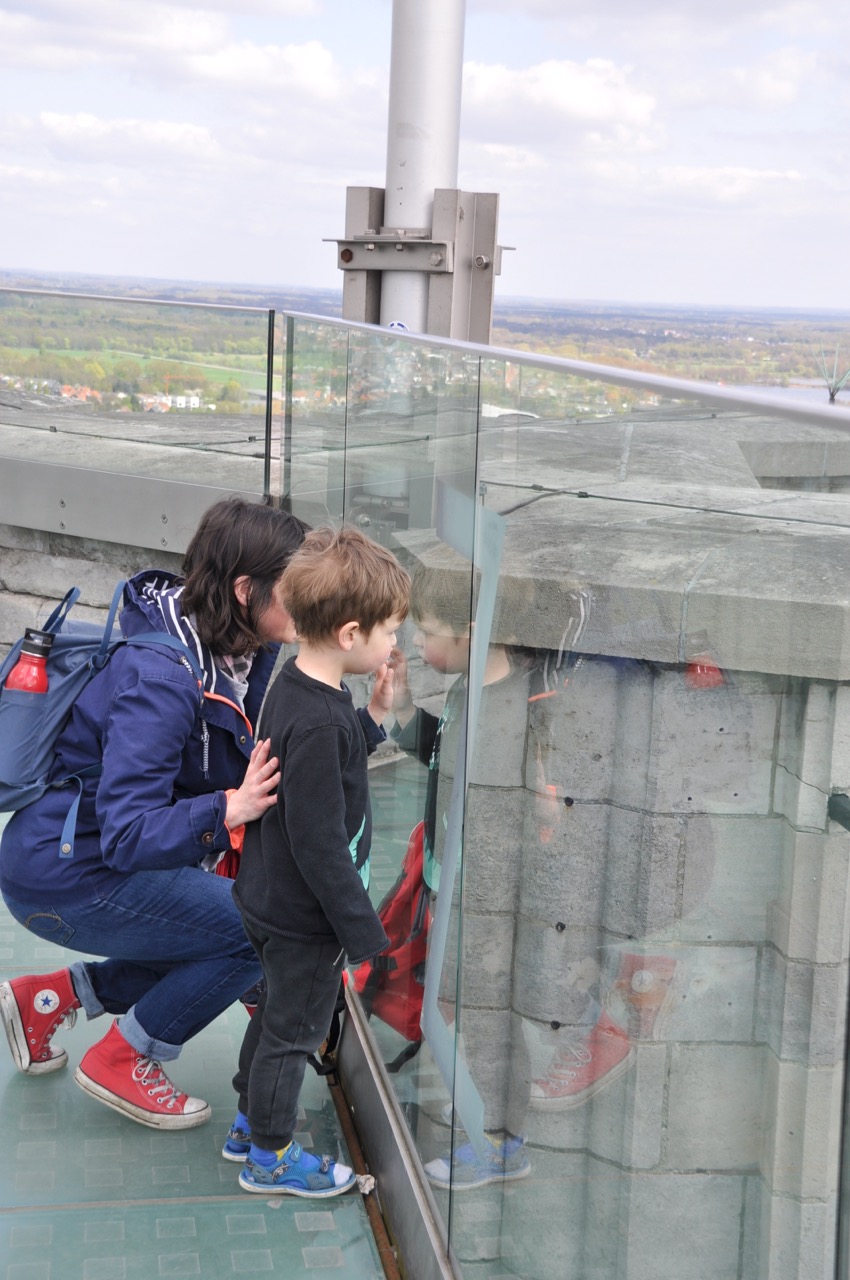 There is no intepretation at the top of the tower and so we had no idea what we were looking at, but the scale and expanse of land spread below us was mind-boggling. 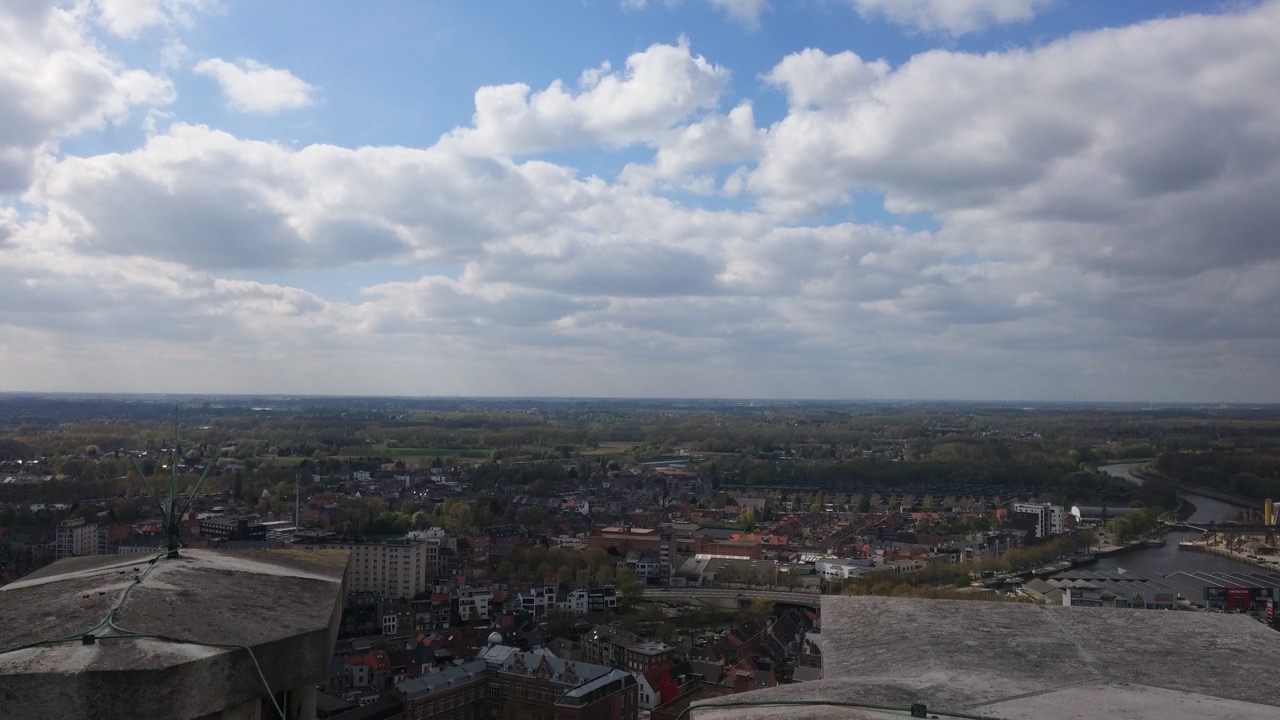 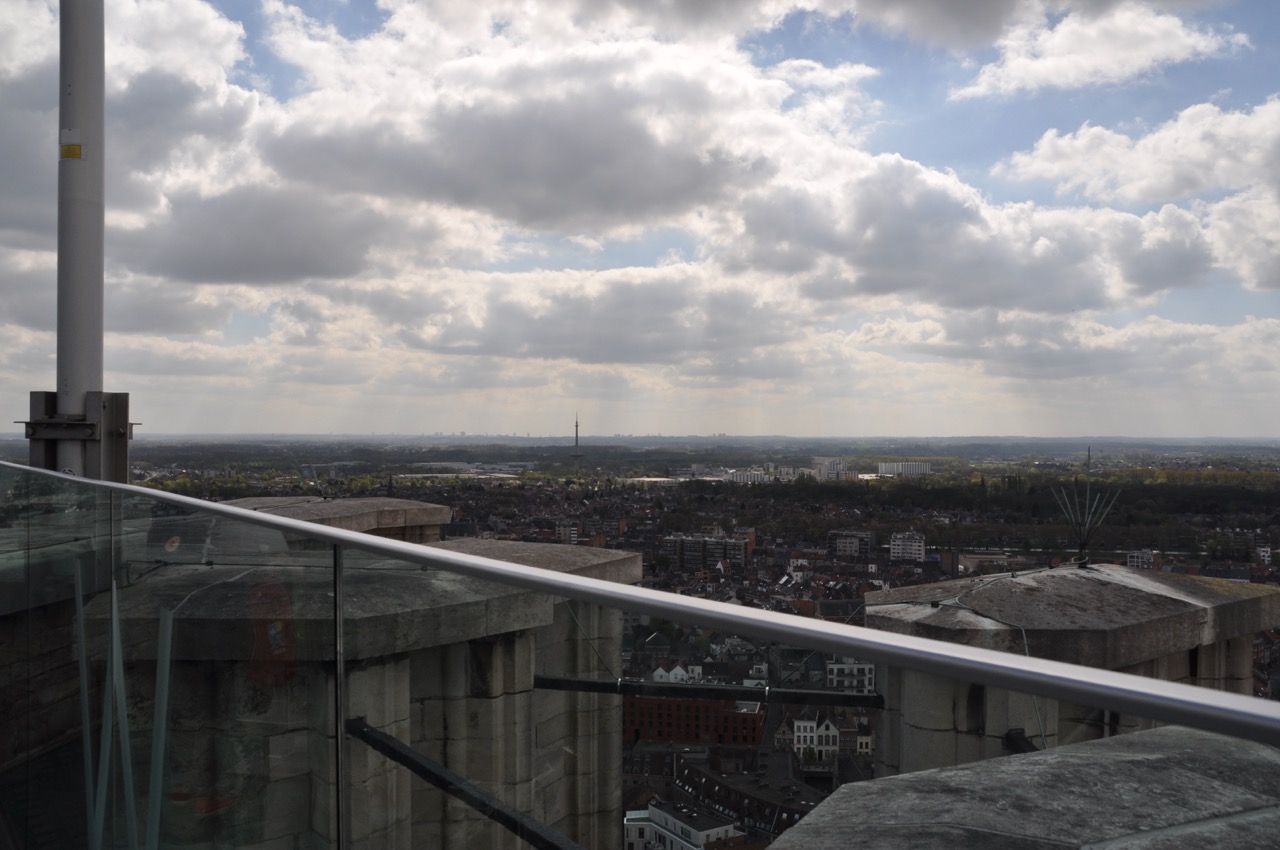 I pointed out to Museum Boy the square we had eaten our ice-cream in the day before, and looked for the river walk we had done on the way. 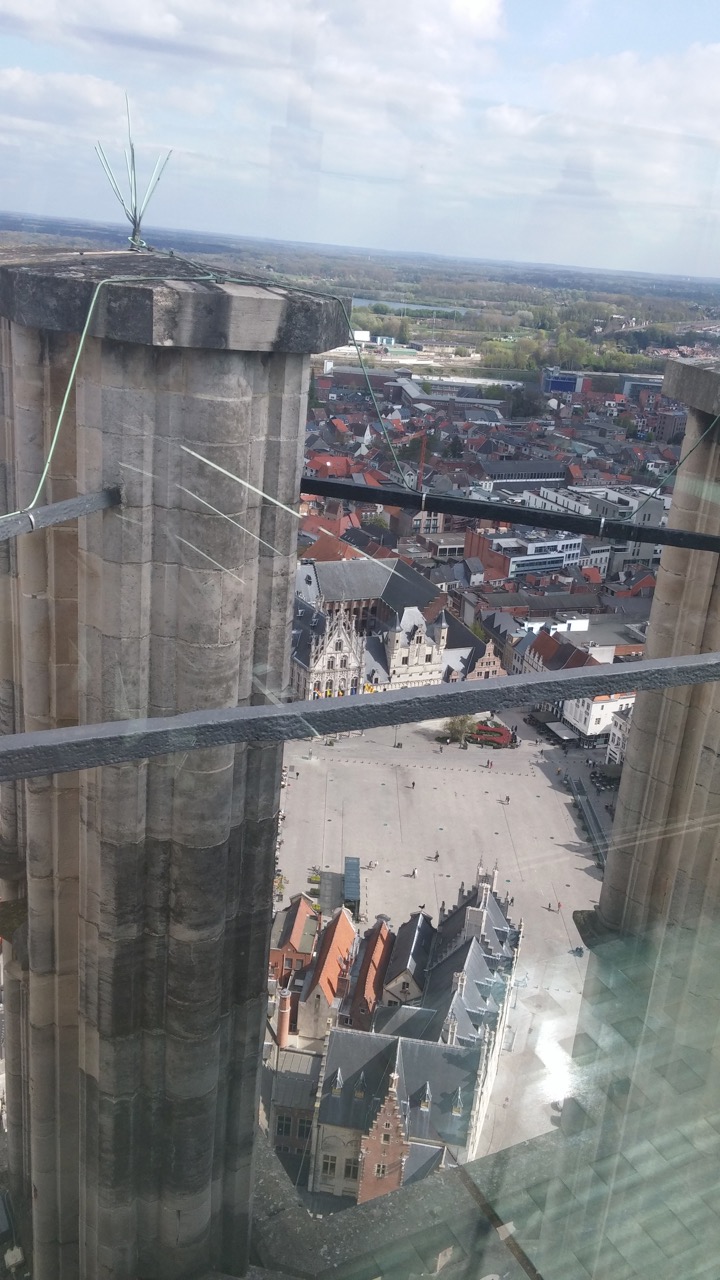 Only later did I find out on a clear day you can see as far as Antwerp or Brussels. If you look really carefully at this photograph below you can make out the distinctive shape of the Atomium in Brussels, some 20km away! 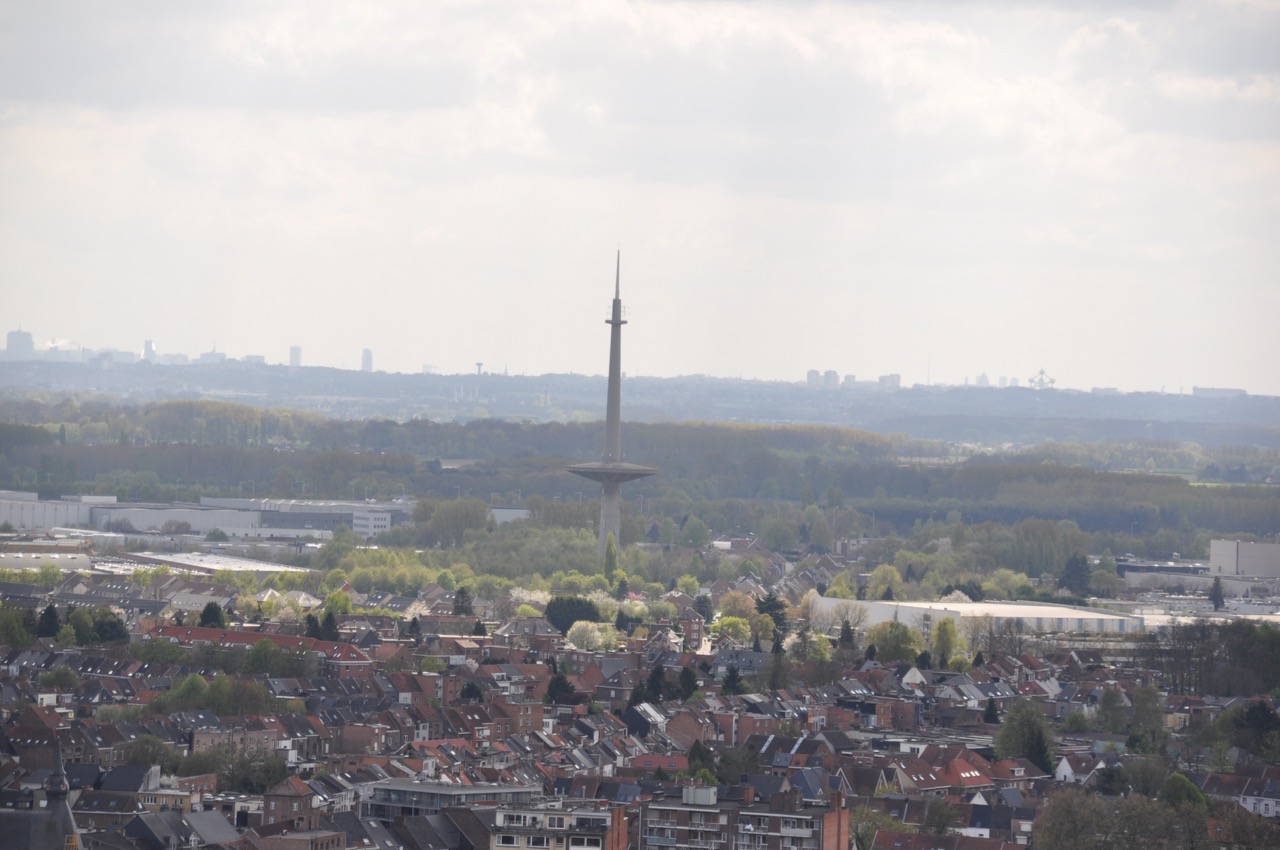 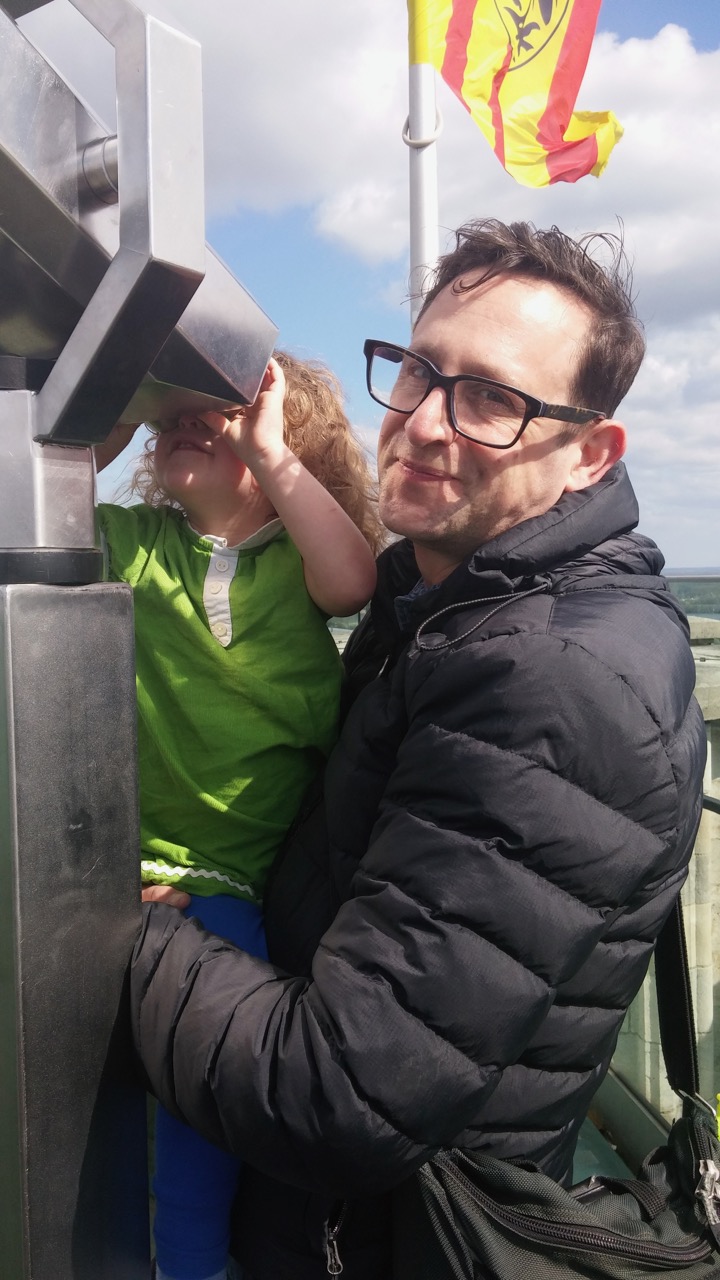 After letting us soak in the views, for a few minutes at least, Museum Boy was ready for the descent. This was a lot simpler and quicker than the way up, and in no time at all we reached the ground floor. But it was still very physical – our legs were trembling for quite some time afterwards due to the effort!
I was truly disappointed there weren’t any ‘I climbed the tower’ badges or other such tacky merch on sale as I really felt we had earned a souvenir. Instead, we promptly bought ourselves congratulatory ice-creams, and played on the giant yellow man, right next to the tower. 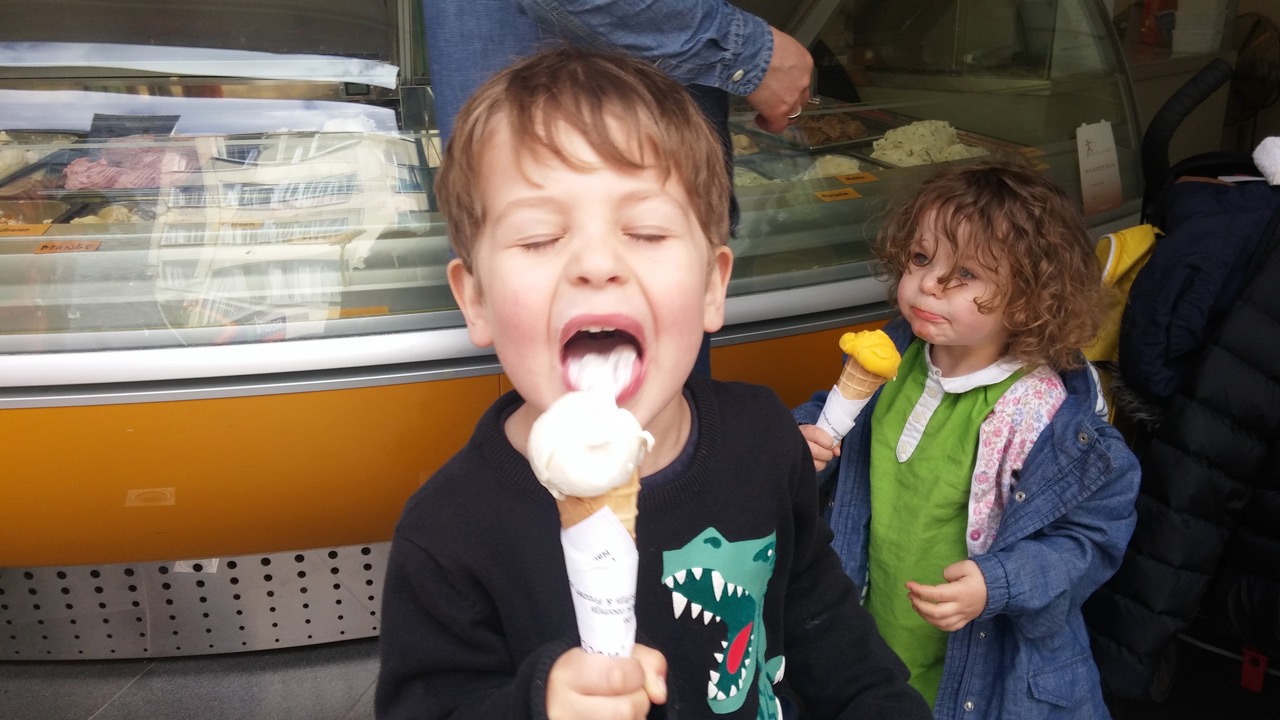 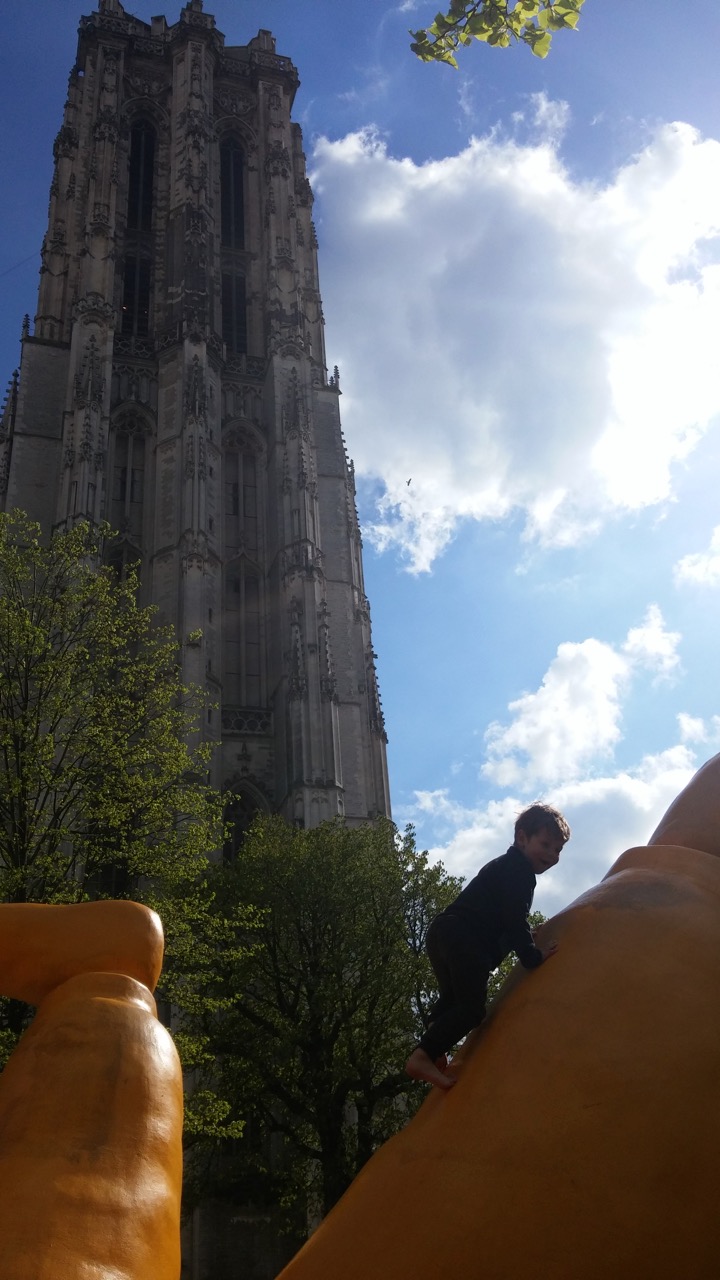 If any proof is needed how much Museum Boy enjoyed it – here’s some photos from before (sat in the buggy, exhausted) and afterwards (playing and exhilarated!) 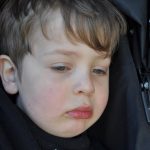 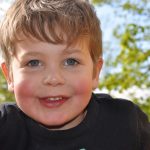 Aside from the fun, what makes this such a memorable experience is what I learnt about my son – I got to see his physical strength, determination, and adventurous spirit. Afterwards, I found out that St Rumbold’s tower is higher than the Leaning Tower of Pisa and the Statue of Liberty. Woah – suddenly, our family travel possibilities just got a lot more exciting!
What have you learnt about your family through your travels – have your kids ever surprised you?
THE BARE BONES
St Rumbolds Tower, Onder den Toren 12, 2800 Mechelen
https://toerisme.mechelen.be/ascent-of-st-rumbolds-tower
Check website for opening times, currently 1pm-6pm daily, and from 10am-6pm on Saturdays.
Best for: Around 5 years up – but it can be done with younger, as we’ve just shown!
Allow: 1 to 1.5 hours for your visit
Ticket prices
Adults: €8
Children and young adults (4-26 yrs): €3
Under fours: free
Family: 1 or 2 adults + 1 to 4 children/young adults under 26 yrs: 20% discount
Advance booking is recommended as the number of visitors is limited to 20 per 20 minutes.
Baby change: None.
Toddler time to toilets: Anything up to 538 mostly stone steps away. The horror. 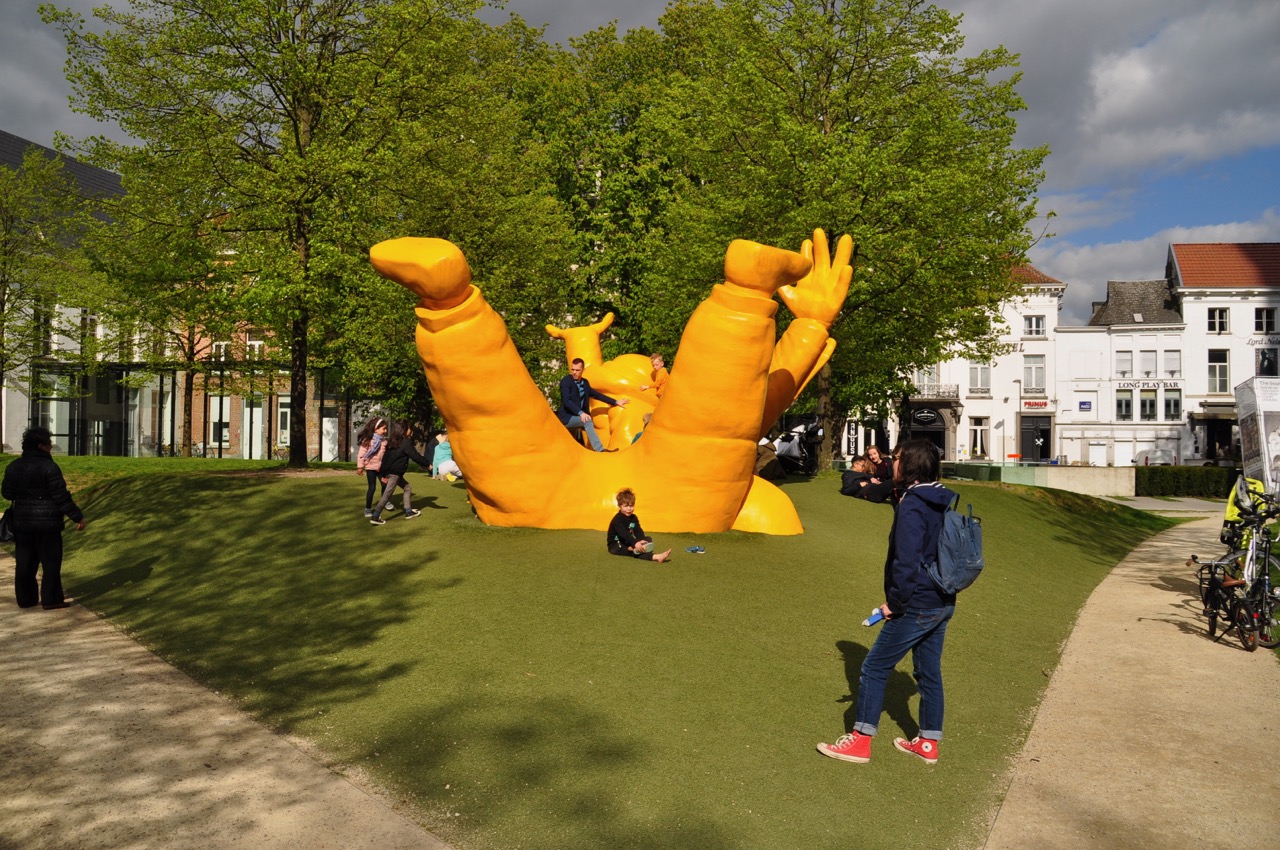 Nearest playground: Right in the shadow of the cathedral is a giant, slippy yellow man to climb upon. A note of caution – keep a close eye on younger children, as it proved too challenging for Museum Toddler.
Want to make more of a day out of it?: Mechelen is a very family friendly city, which I hope to blog more about soon! Pick up a trail from the nearby tourist information to find more special play sculptures dotted throughout the city or walk 10 minutes to the charmingly old-fashioned Speelgoedmuseum (or Toy Museum).