There are very few things in life for which I will commit to being somewhere with two under fives at 9am in the morning. Especially when this somewhere is literally the other side of London – and up a steep hill! But a press invite to ‘Robot Zoo’ exhibition at the Horniman was one of these few things, especially as we’ve really enjoyed our visits there in the past. 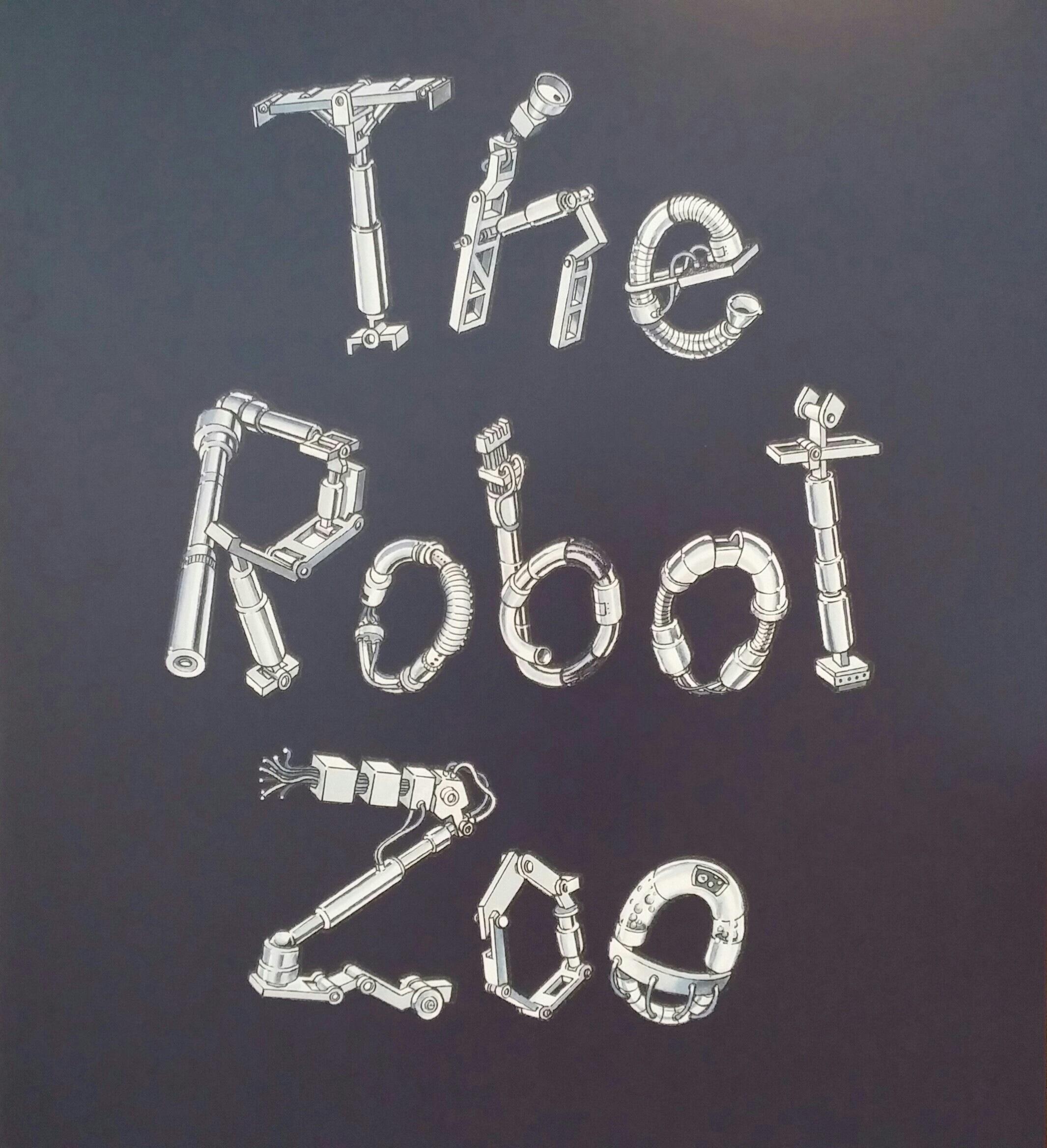 Museum Boy was as excited as expected on hearing there was something which combined two loves of his – robots AND zoos! That excitement helped carry us through the frantic rush to leave the house by 7.30am. (Side question: Why does getting ready for a day out always feel much harder than leaving at the same time for school or nursery?) The anticipation also helped keep our spirits up on the somewhat epic rush-hour journey across the river by public transport. 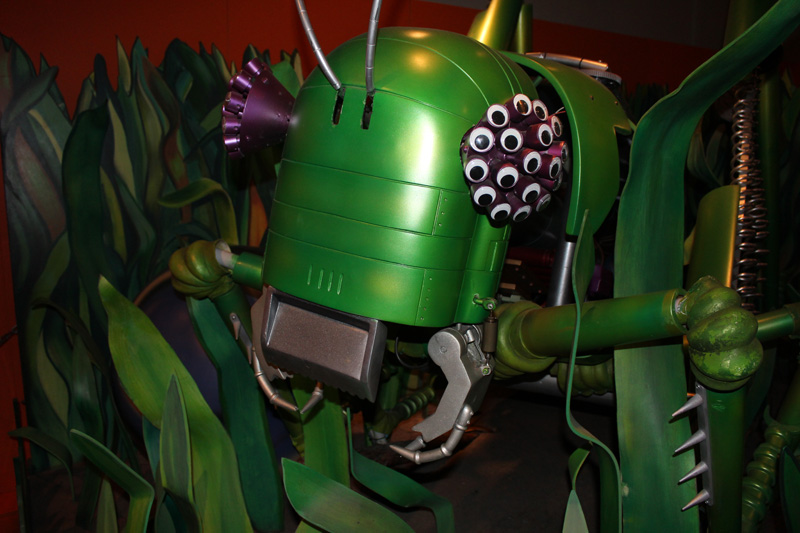 Robot Zoo recreates animals and insects in giant, robot form – from a squid with 18-foot tentacles to a rhino in the robot workshop, still under construction. The robots are highly appealing to children, with lights, movement, and lots of levers and buttons to press and pull. The designs aren’t cutesy but also weren’t scary for either four year old Museum Boy or two year old Museum Toddler. 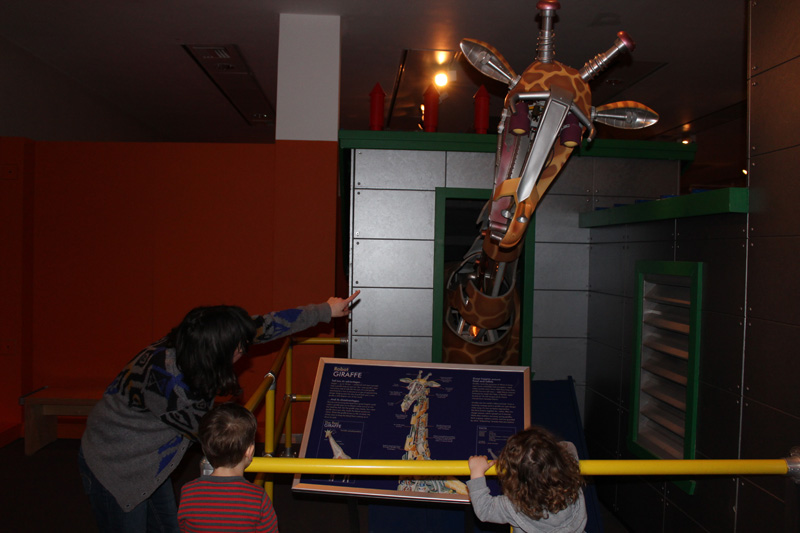 They robots are educational as well as visually impressive, explaining how real animals’ bodies work. For example, the robot giraffe which greets you at the exhibition entrance has a number of valves visible in his neck. Valves in real giraffes restrict blood flow and are what stops the giraffe from passing out due to unrestricted blood flow every time it lifts or lowers its head. That’s something I hadn’t even thought about before – next time I’m feeling dizzy I’ll blame my valves! 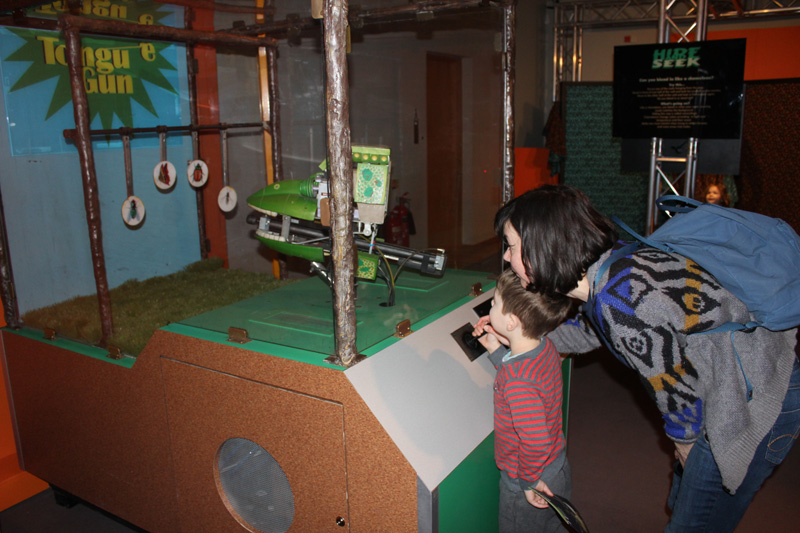 Each robot has a fun hands-on interactive  – like shooting a chameleon’s ‘tongue-gun’ to catch prey or choosing which body parts to put on your own platypus inspired creature.  It’s great to have hands on games that the family can play together, such as the squid racing, or testing our reactions against those of a fly (new respect there!) 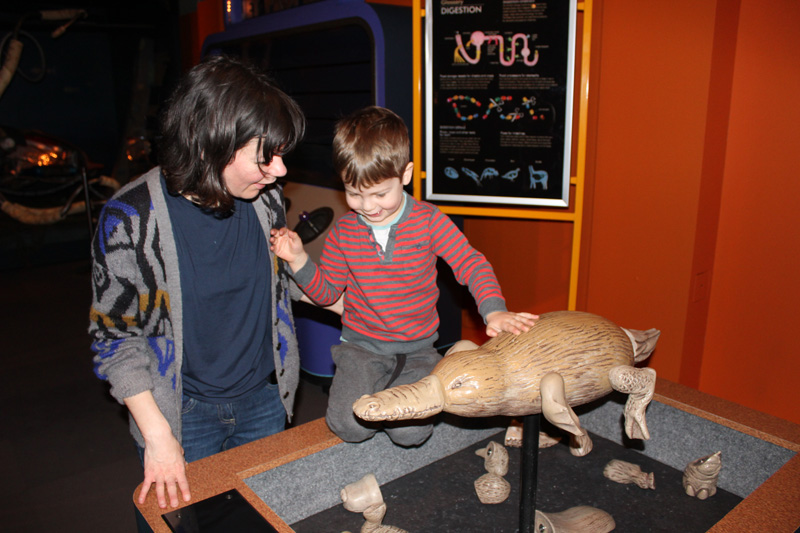 Museum Toddler was in her element. After breaking a barrier and squishing herself between an interactive and the wall and getting stuck , she started to get hands on with the interactives. Her favourite activity was throwing balls with suckers at a board, to demonstrate how a giant squid’s suckers work, which provoked much hilarity and gave me 10 minutes to focus on Museum Boy. Hmm, wonder if those balls would work at home? 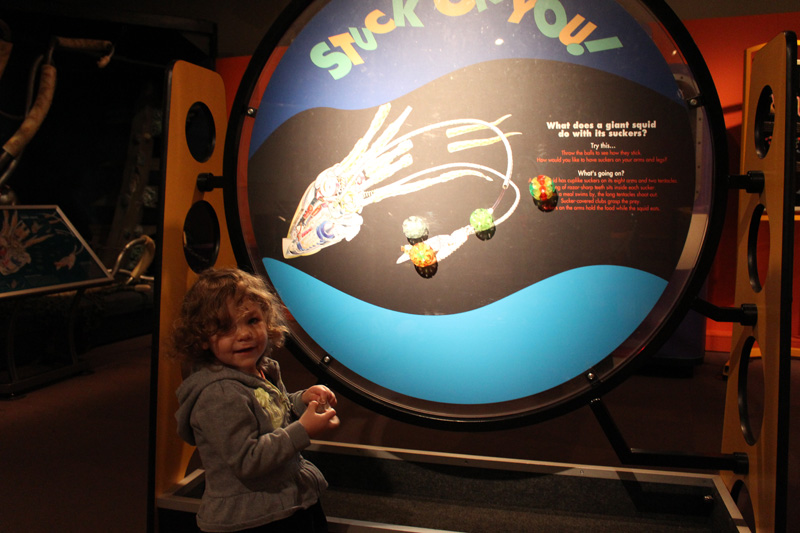 The text panels accompanying the robots weren’t so successful for our group. I found them a little technical and difficult to summarise for a young child (well, for this slightly frazzled mum anyway!) They might add interest to the exhibition for older children who are  advanced independent readers, if they like reading encyclopedia type entries. 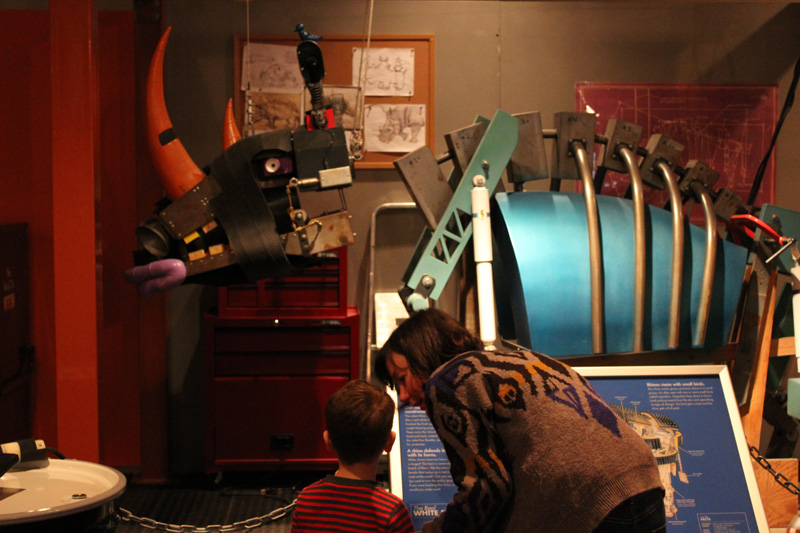 Our favourite part of the zoo was without doubt the giant chameleon. It has multiple hands on parts, so more than one child can play with it at a time – moving its CCTV eyes, shooting out its tongue, or communicating emotions through changing its body colours. 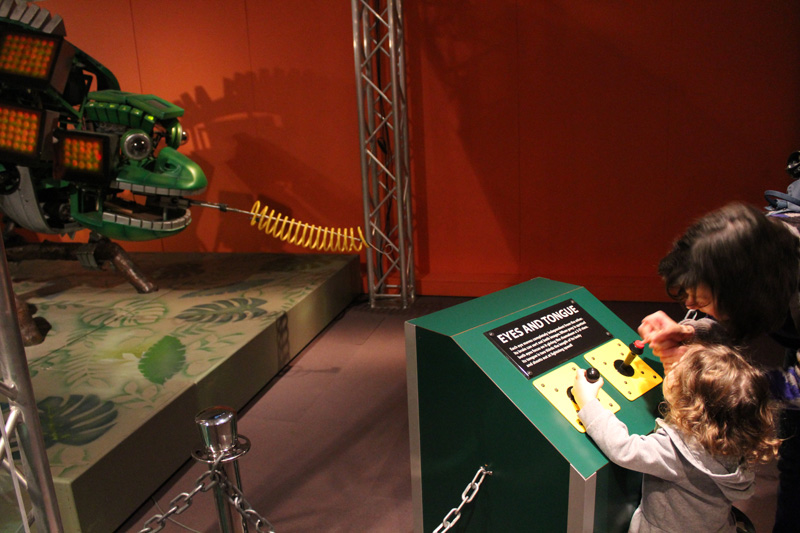 The chameleon also has a great dressing up zone to get a brilliant Instagram-ready selfie – I mean, to explain how camouflage works. (I think. Something to do with capes and circles 😉 Unfortunately  I had to abandon hopes of a floating head family portrait – neither of mine were in a dressing up mood, especially with so many other fun activities! 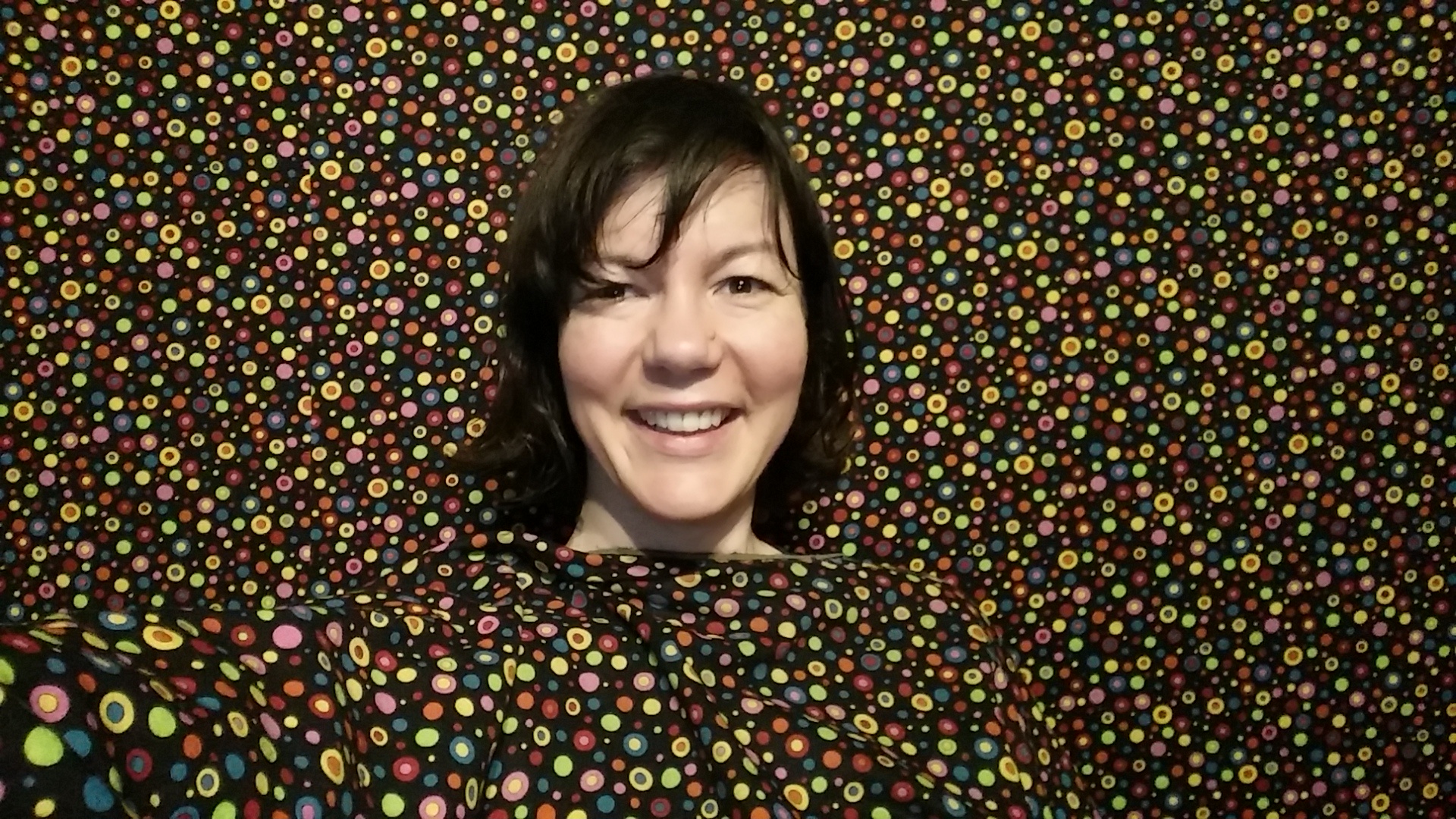 There was only one other moment of disappointment – after 40 minutes of solid hands on interaction, Museum Boy was ready for more, asking ‘where’s the rest of it?’ I realised perhaps the word ‘zoo’ raised his expectations –  normally we spend all day in a zoo, and still don’t see it all. The exhibition room at Horniman isn’t that big, so perhaps a small menagerie or travelling circus is a better analogy – although that’s not a comparison he’d understand! 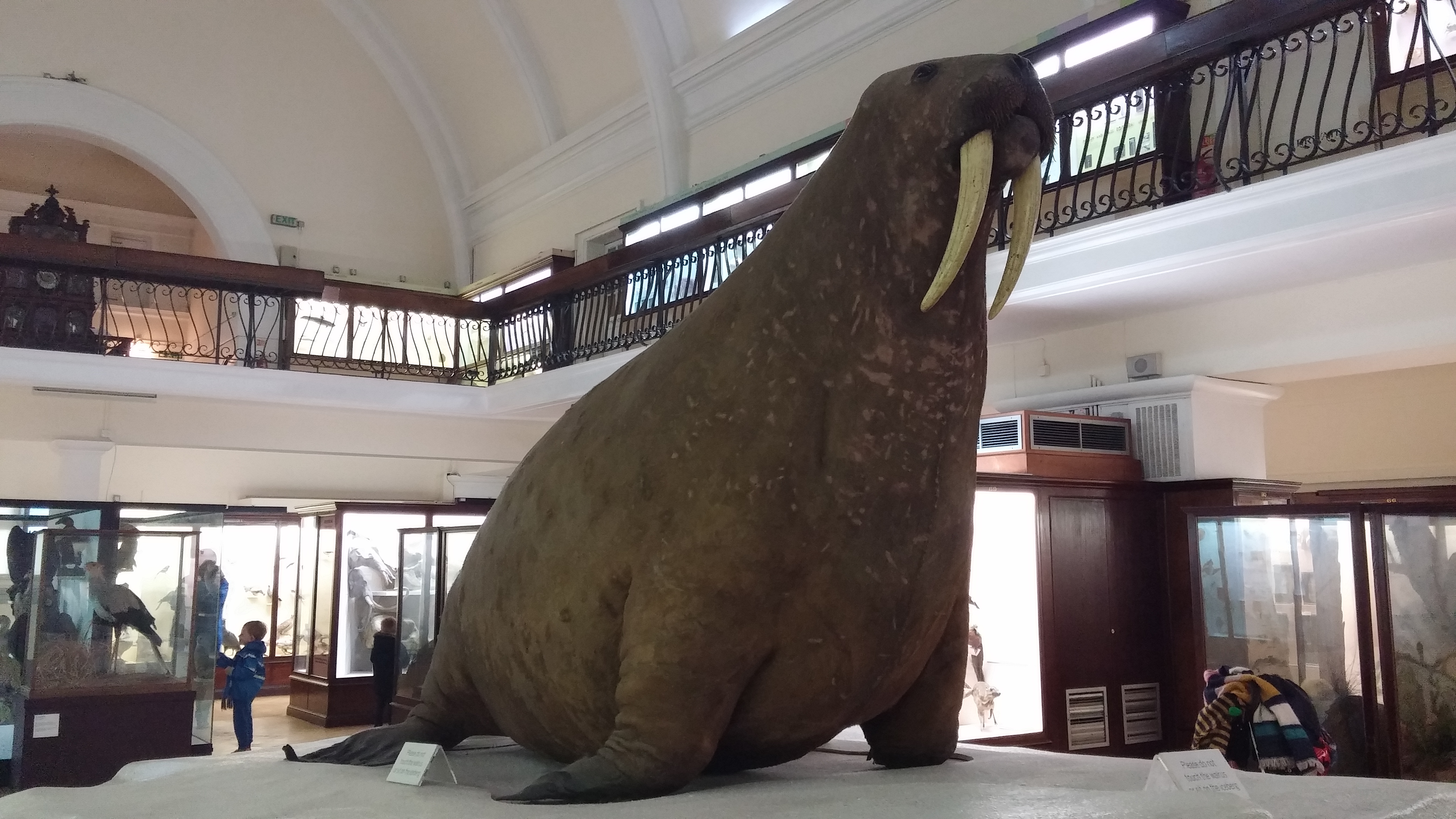 Museum Boy’s disappointment didn’t last long however, as there’s plenty more to see and do at the Horniman Museum. We paid a visit to the famous walrus, looking remarkably good considering he’s been welcoming visitors for over 115 years! MT loved the nearby stuffed birds and animals, whilst MB was fascinated a the video showing taxidermy in action. He’s definitely a scientist in the making. 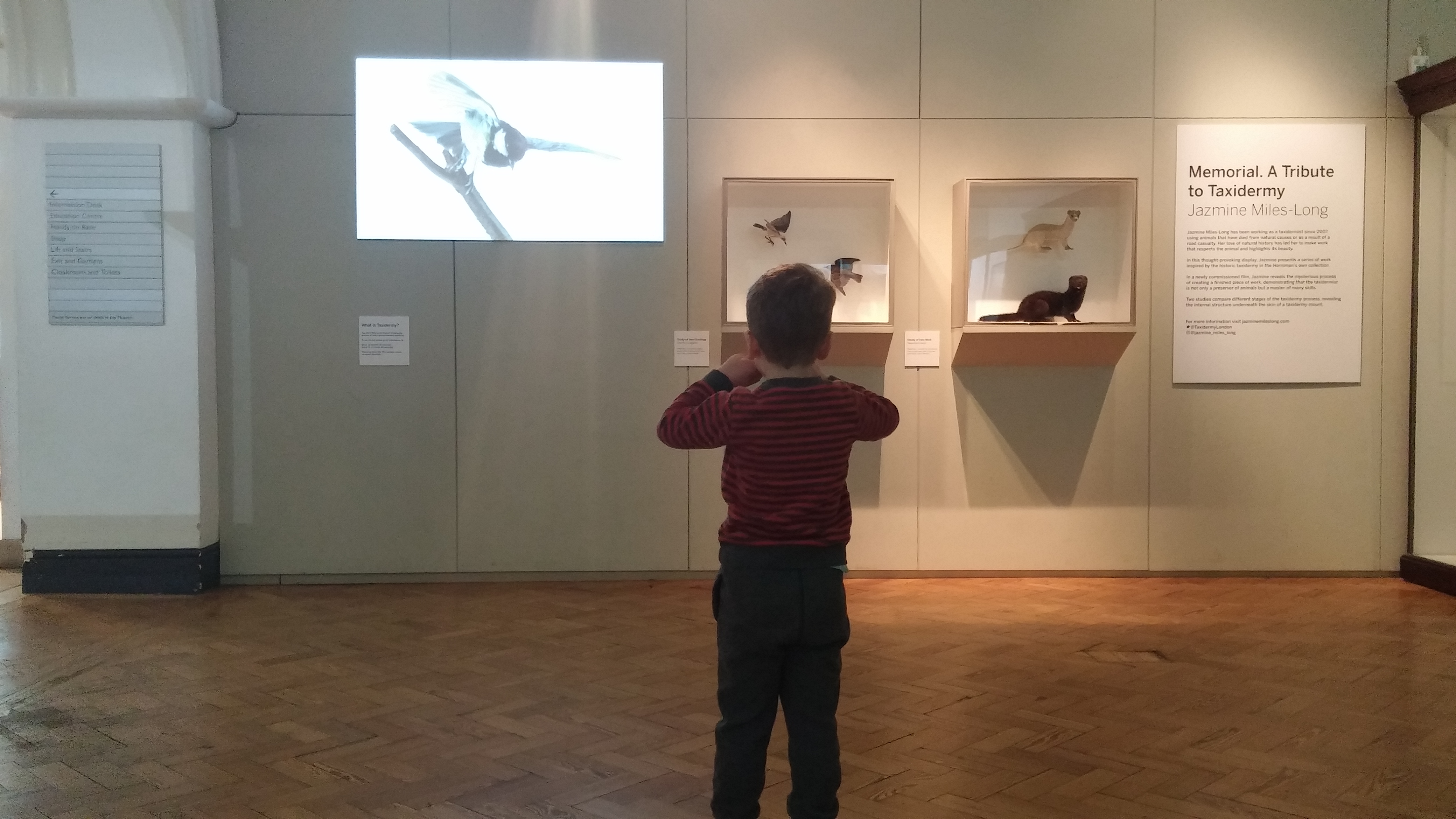 We finished up a visit with a stop at the cafe to try the unique Horniman Walrus chocolate biscuits – which were delicious! 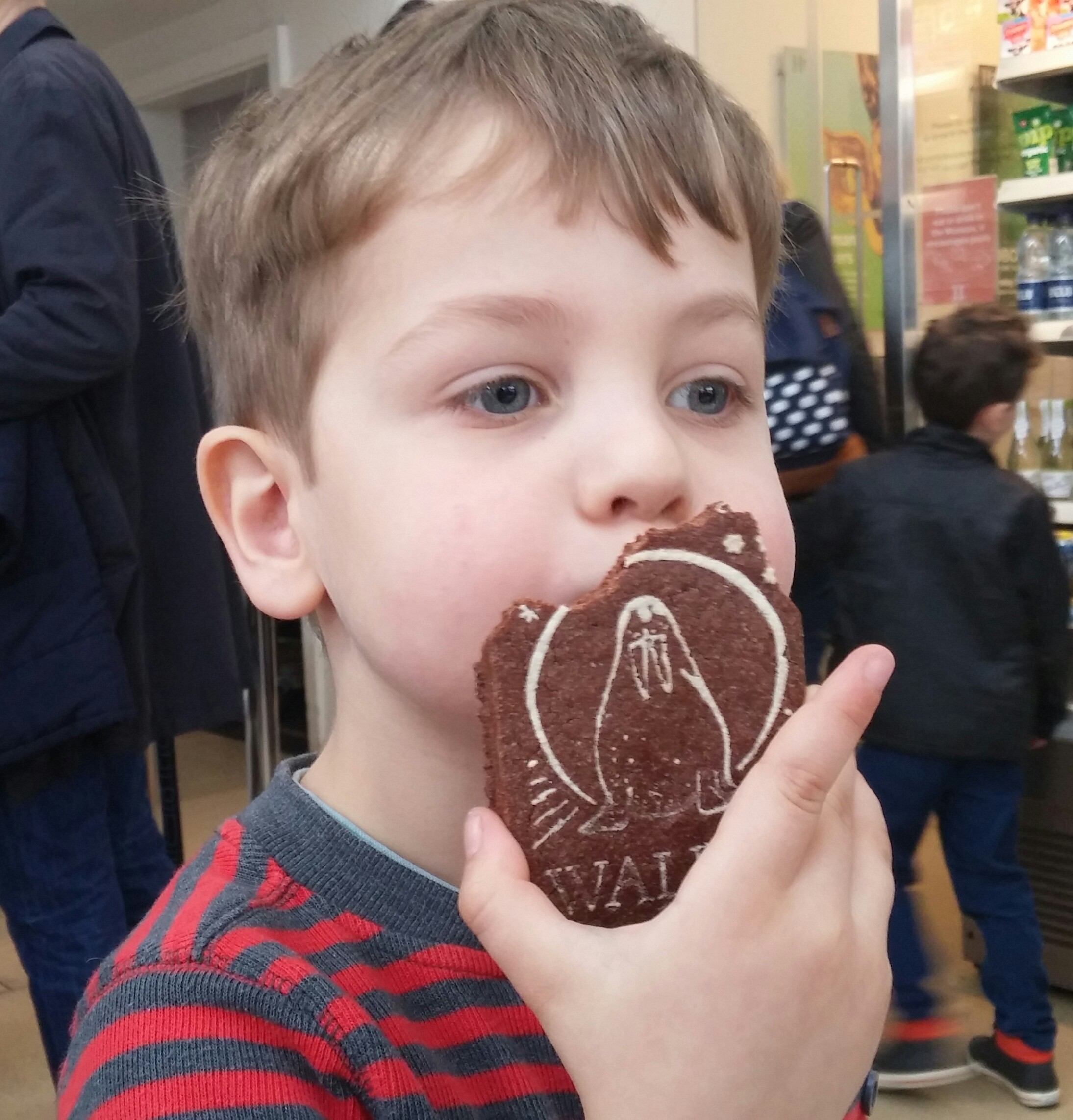 If we weren’t meeting friends elsewhere we could easily have spent most of the day there – after all, they have an aquarium, petting farm, park, and numerous family activities as well as more displays. Robot Zoo may not be of the epic zoo-like proportions my son imagined, but it’s another great reason to take your family to the Horniman this summer. And well worth leaving the house early for, even if it involves crossing the river!
Disclosure: we were given free entry to the Robot Zoo for the purposes of review, with thanks to the Horniman Museum. All opinions, and food expenses, are my own.
THE BARE BONES
Robot Zoo runs until 29 October 2017
Horniman Museum, 100 London Rd, Forest Hill, London SE23 3PQ
http://www.horniman.ac.uk/visit/exhibitions/the-robot-zoo-101
Best for: Under 8s
Allow: 30-45 minutes for your visit
Ticket prices (including 10% voluntary Gift Aid donation):
Adults: £7.70
Child: £4.40
Under threes: Free
Family (2+2) : £18.70
Advance booking is recommended for weekends and school holidays. Joint tickets with the aquarium are also available.
Baby change:One baby change facility in the disabled toilet, with fold down baby change and working strap. They also have a separate, dedicated baby feeding room with soft chair with arms, and a mirror. Kudos.
Toddler time to toilets: They’re on the same floor, so you can do it in a minute.
Nearest playground: There’s plenty to explore in Horniman’s own gardens – but for a playground proper, just pop over the main road to Horniman’s Triangle which has a sandpit, webbed climbing frame, and a cafe.
Want to make more of a day out of it? There’s plenty more to see at the Horniman, some of which I mention in this post.