A prior engagement took us to Essex this weekend, so we decided to visit the family-friendly Chelmsford Museum. As the 11-year old was at a bowling party,  the toddler had us to himself.  Our first glimpse of the museum was favourable, surrounded by parkland and with a dramatic new glass extension. 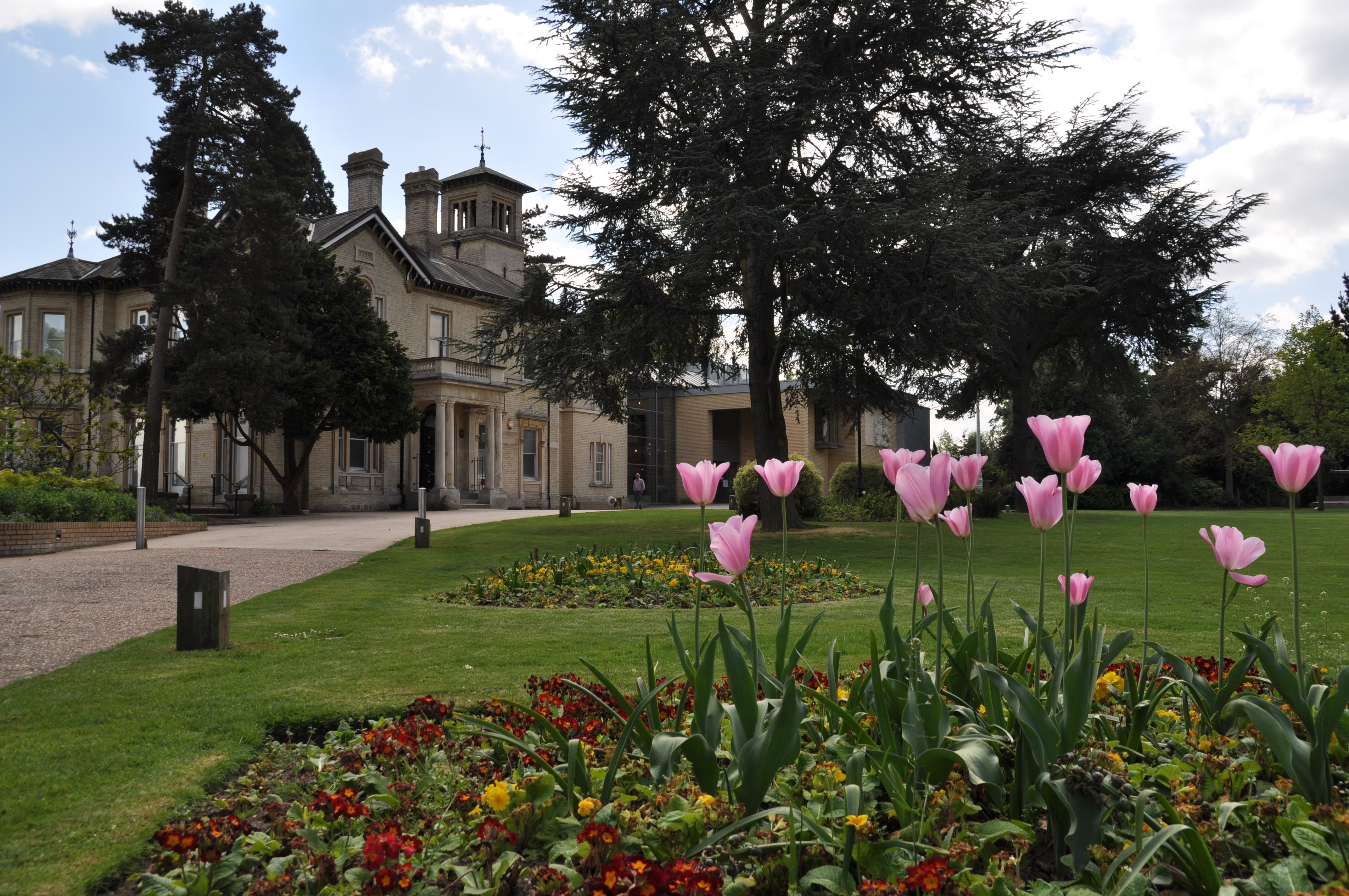 Chelmsford in bloom – entrance to the museum 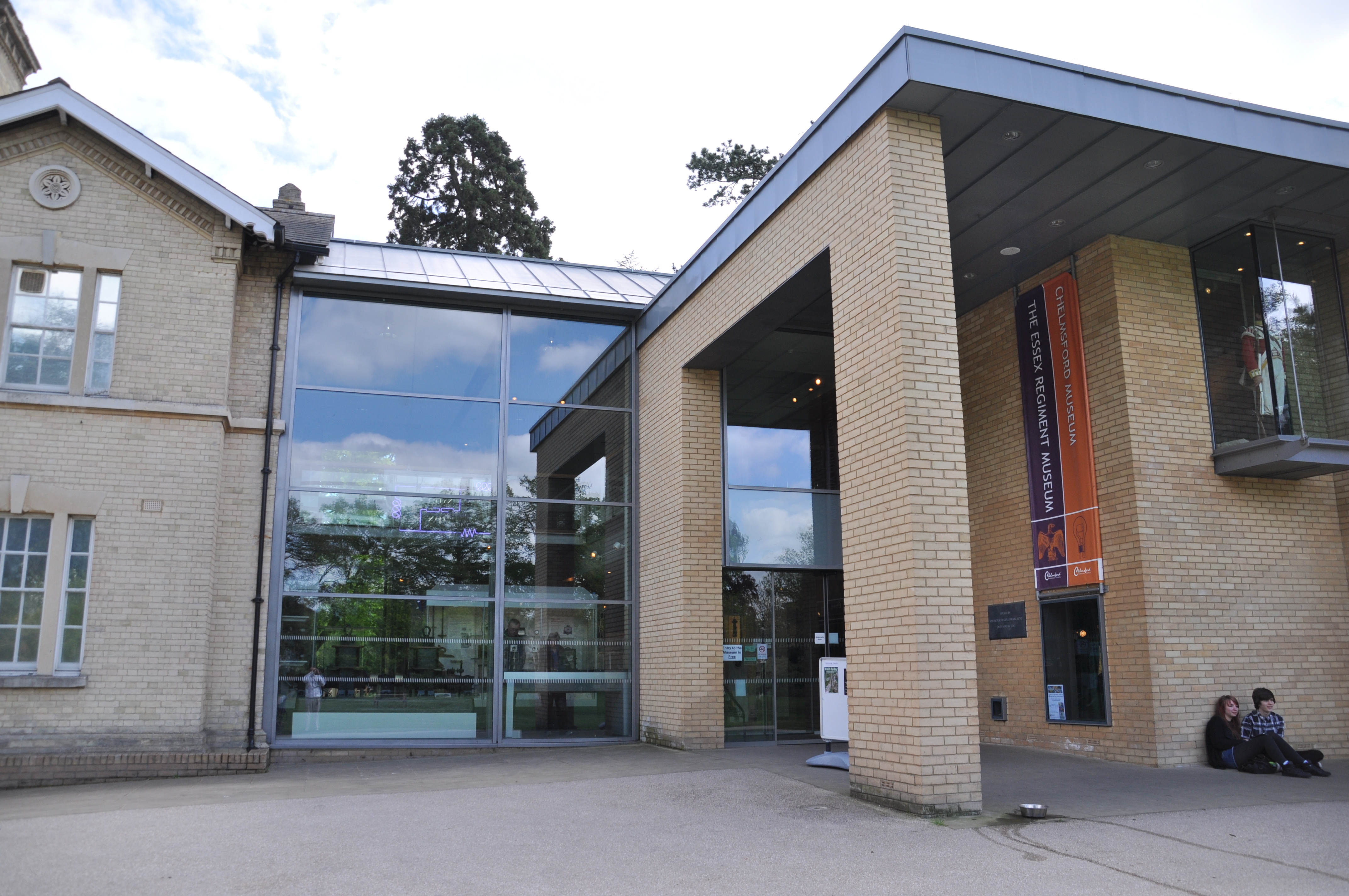 Old and new – entrance to the museum. Two children required to prop wall up.

You walk into a large bright space with a welcome desk – many  praise the friendly nature of the staff, so I’ll assume that my entrance coincided with an off moment. The space holds ‘Bright Sparks’, an exhibition about local industry and electrification, with large exhibits and lots of hands on interactives explaining scientific principles. 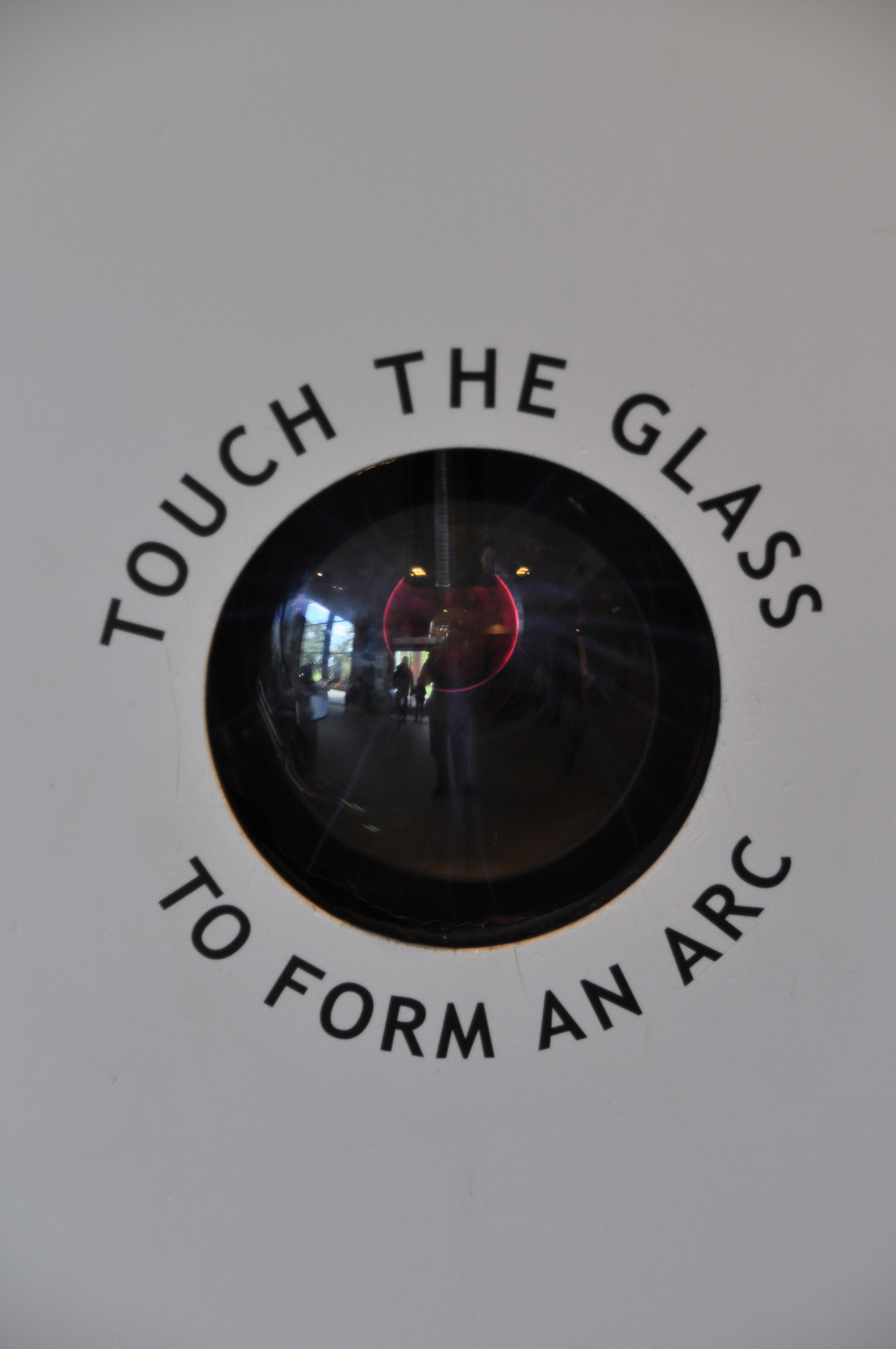 One of many hands on exhibits in ‘Bright Sparks’ 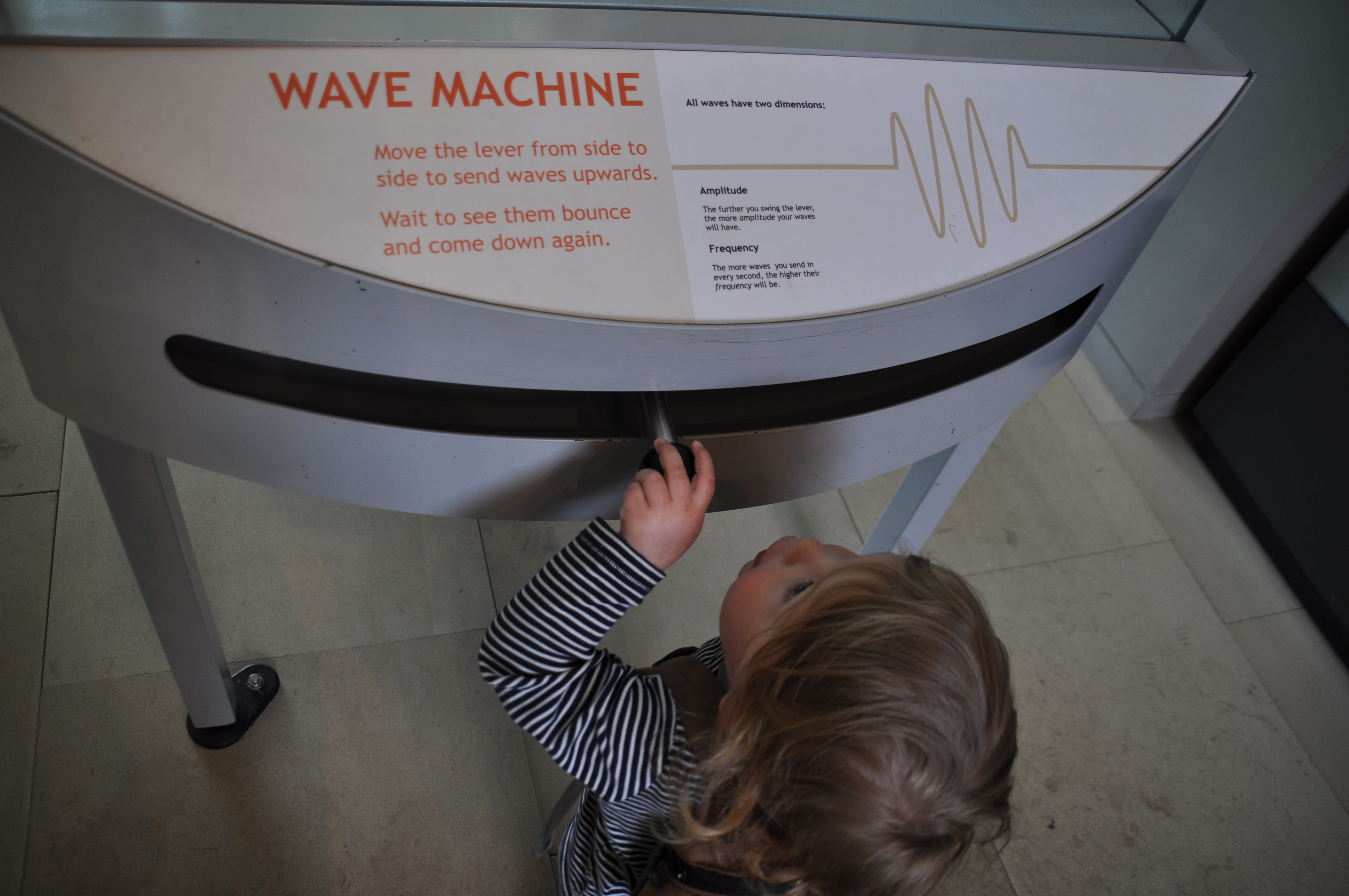 There’s also space under the stairs to park your buggy, and pick up one of their free explorers toolkits for children – an apron which you can fill with a trail, slate and chalk, measuring tape and magnifying glasses. The toddler was reluctant, so I gave it a go instead! 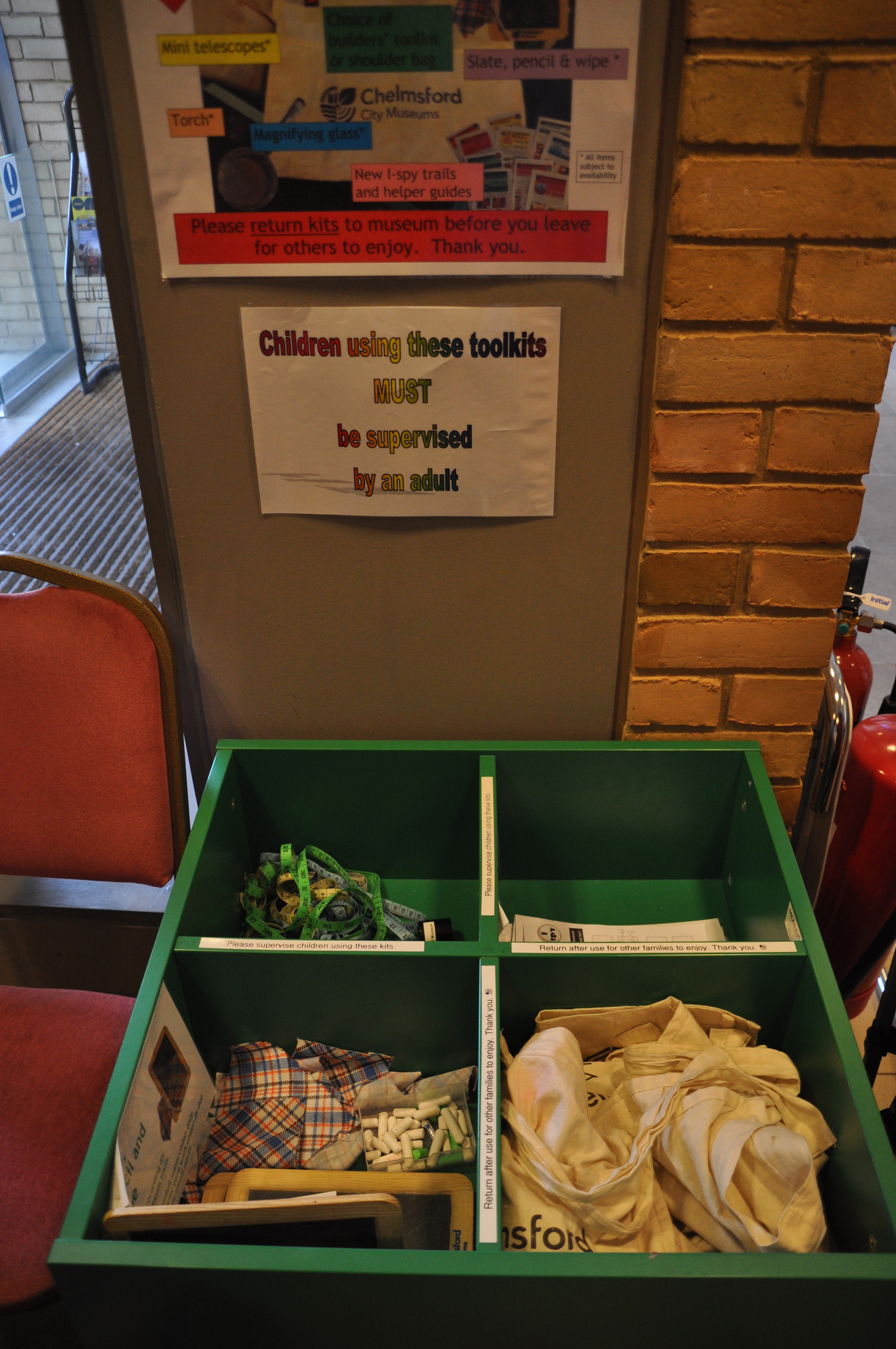 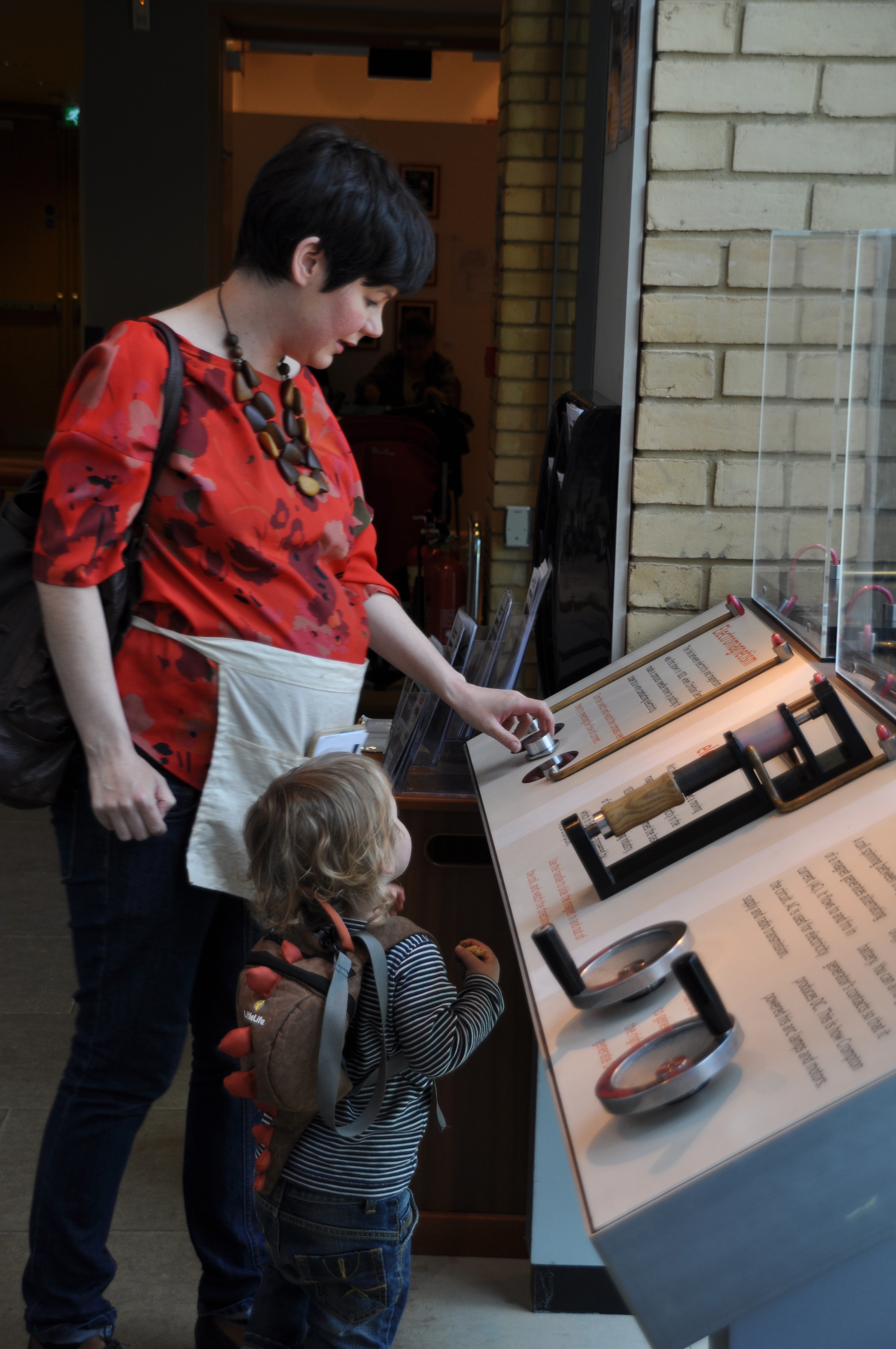 Note to self – bump and aprons don’t go

On leaving the entrance, we stumbled from one theme to the next, becoming increasingly confused. Passing a Victorian larder/kitchen set up, we then saw a giant grizzly bear, and walked upstairs to see a portraits exhibition, past coins and tokens, followed by two rooms on twentieth century social hobbies, a room of early glassware, and then pottery. We followed that with two army museums, a live bee hive, taxidermy, geology, archaeology and then finally at the end of our visit we found the displays which told the history of Chelmsford in chronological order. There were also bits of the history of the house dotted around some of the displays. 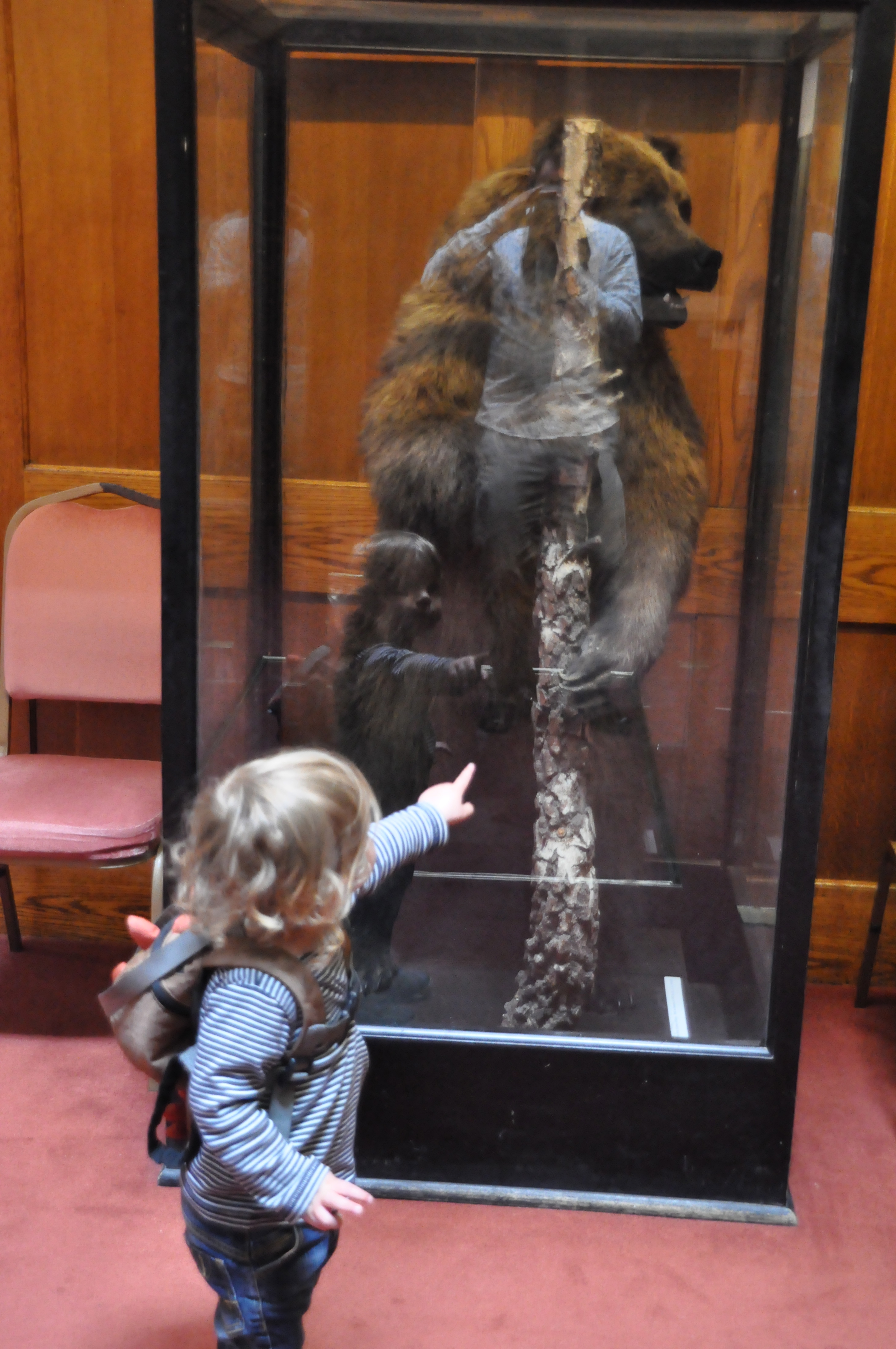 Meeting Boris (the bear not the mayor!)

Having some sort of understanding of layout is really important – it felt very exhausting to work out what each room was about! Part of the issue is that the story of Chelmsford starts at the old entrance, which we reached at the end of our visit. I was suffering museum fatigue by then, and couldn’t give the displays sufficient time – I would have preferred to have started with them. It also shows the problem of building a new extension without fully considering how it works with the rest of the space. Improved signage and/or a map on arrival could help remedy this. 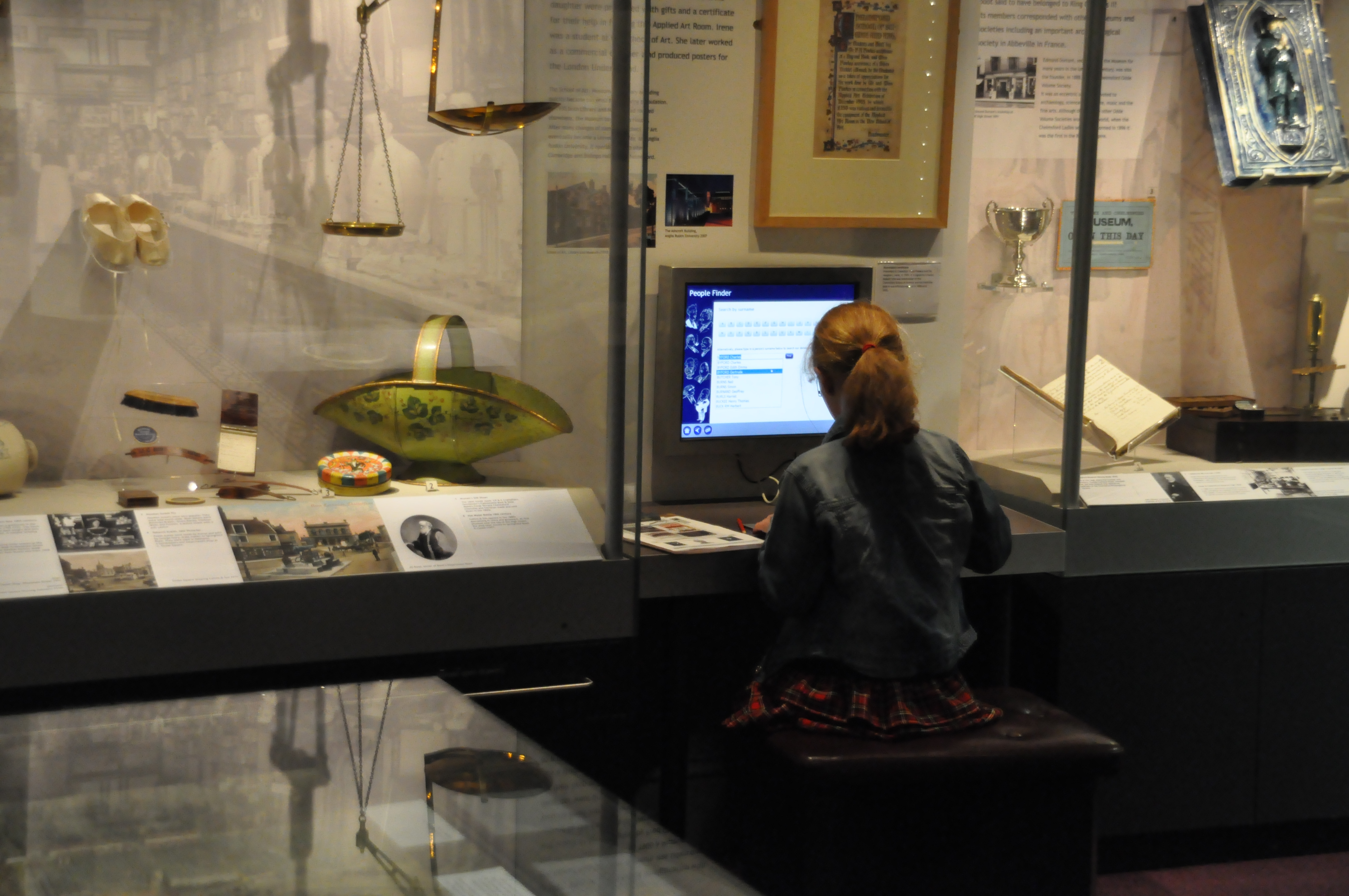 Interactive in Story of Chelmsford

There is plenty to commend in terms of family provision: footstools near some showcases for those short of stature and free children’s quizzes to left of entrance door in increasing levels of difficulty. There is a room to picnic with vending machines, high chairs, children’s books and puzzles to use, although it felt rather municipal. The museum offers family friendly activities throughout the year, including its Friday Fives for pre-schoolers and Wednesday Wonders for ages 4+ in school holidays. 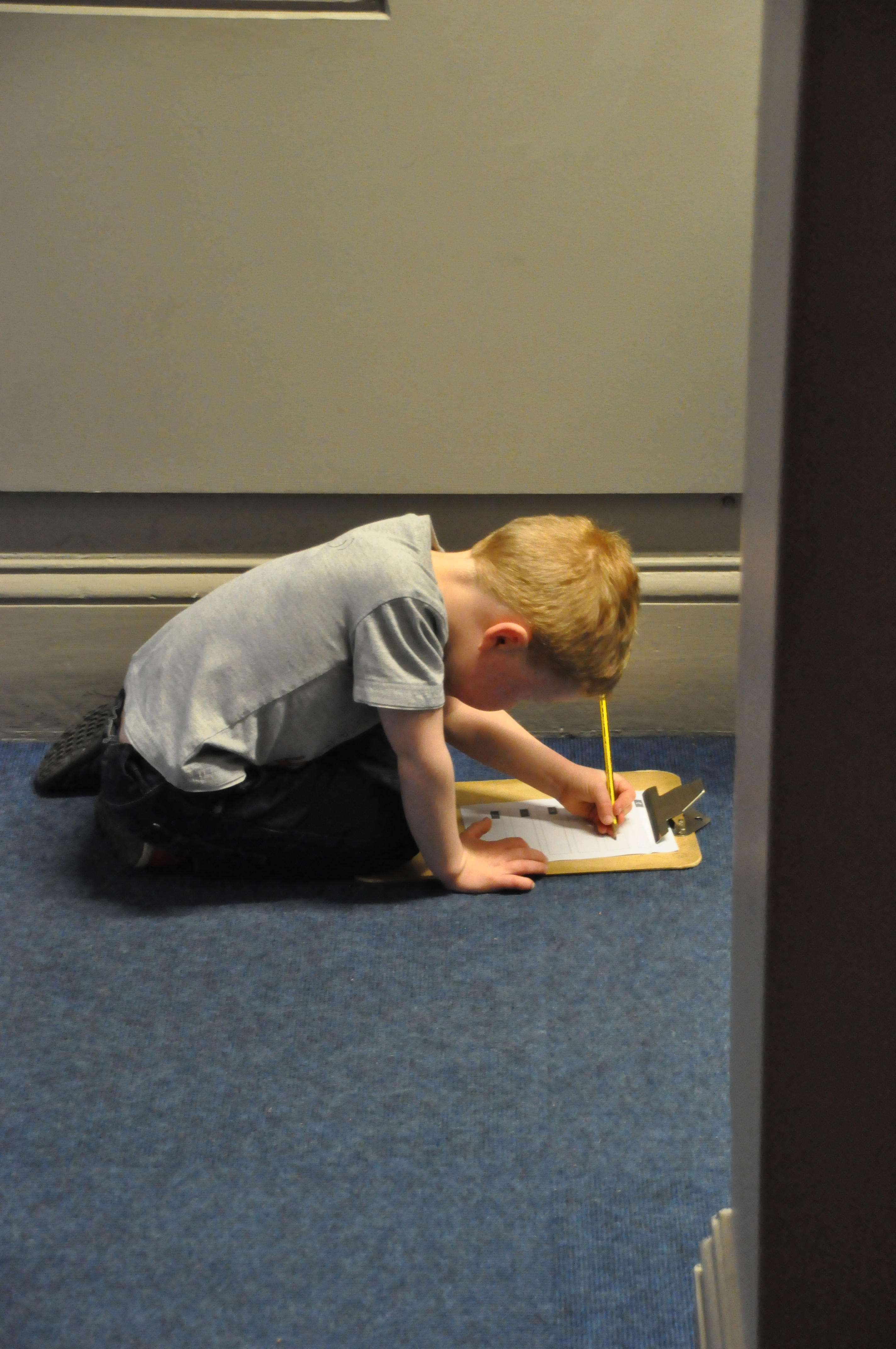 Our highlights were those exhibits which seemed to revel most in their subject, without regard to current trends in display design. The natural history displays provided another animal point and name session. The Essex Regiment Museum was dramatically lit, and had a number of dioramas showing the history of the regiment, including the First World War, liberation of Europe and work in Northern Ireland. I can imagine the weapons and uniform appealing to Action Men fans, young and old! 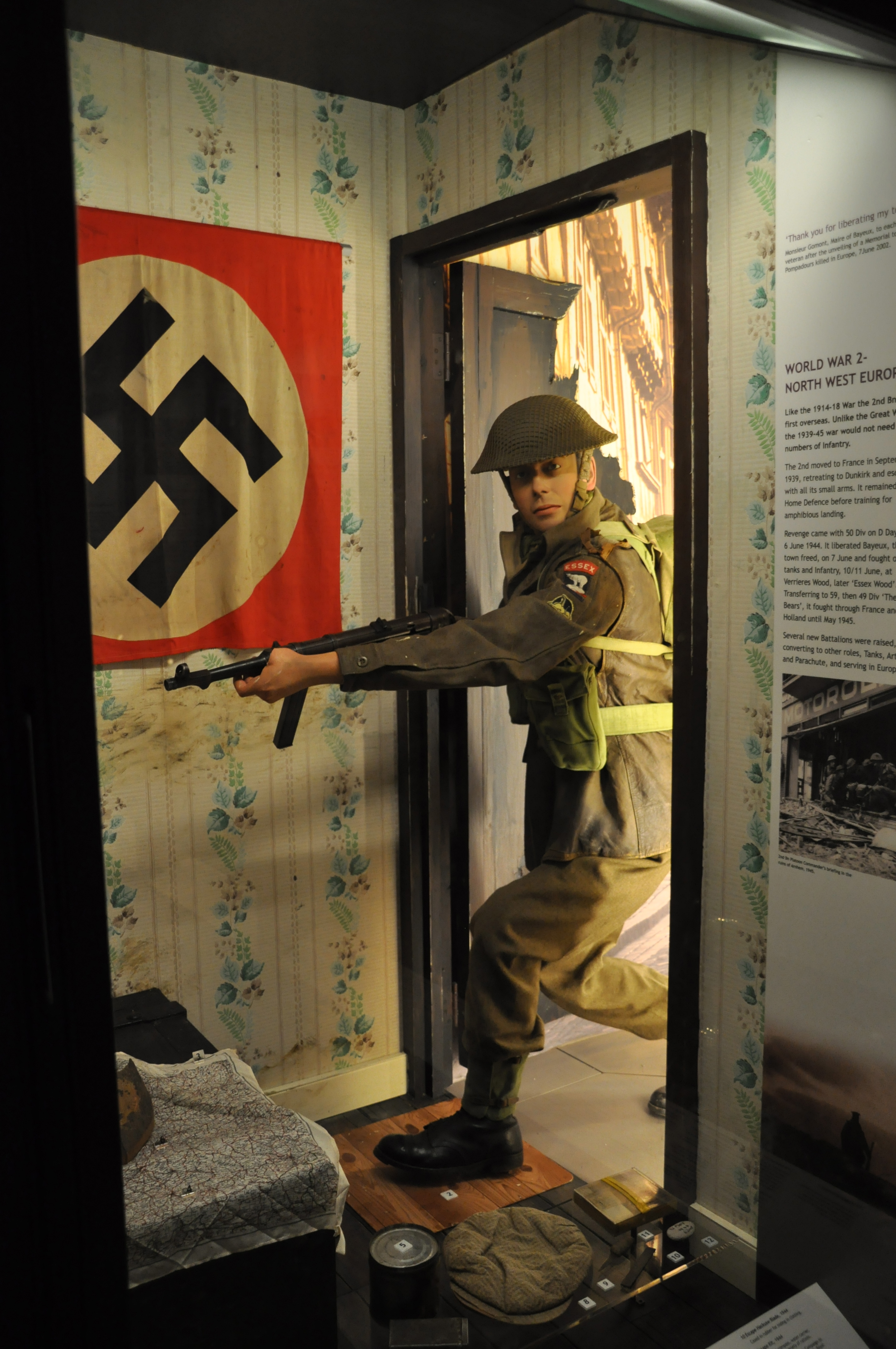 The liberation of Europe, as it really happened

The main draw however was the bees. Here you could see a live hive in action, and watch them enter and exit outside through a perspex tunnel to the window. It wasn’t just our son – we met a 6 year old boy and his grandparents, who bring him here regularly just to see the hive. 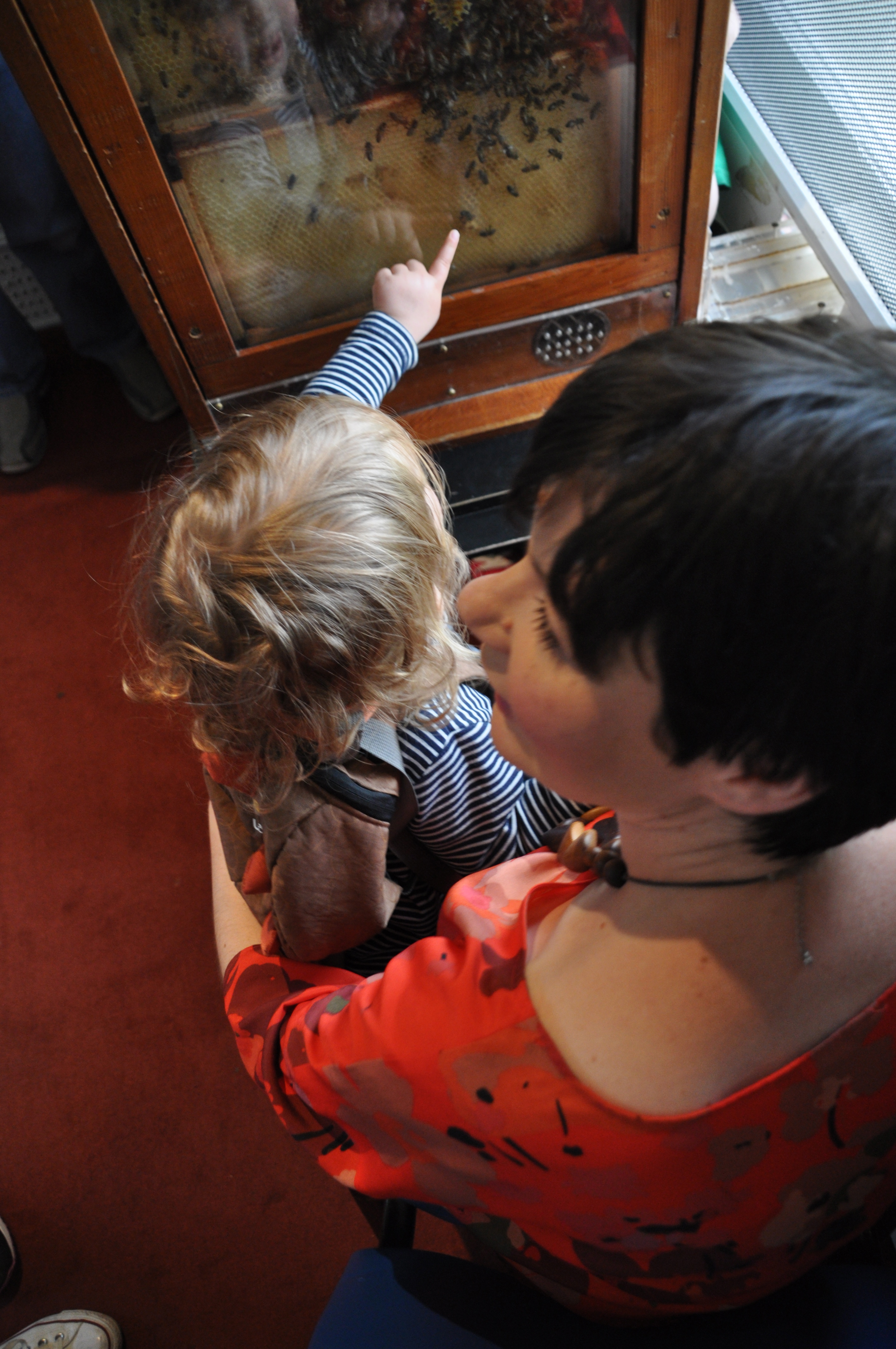 The museum is situated in the well kept Oaklands Park with not one but two playgrounds. The toddler had a great time in the under twelves area, which was loosely knight themed and included a flying fox,  climbing equipment, a tunnel through hill, swings and a roundabout. 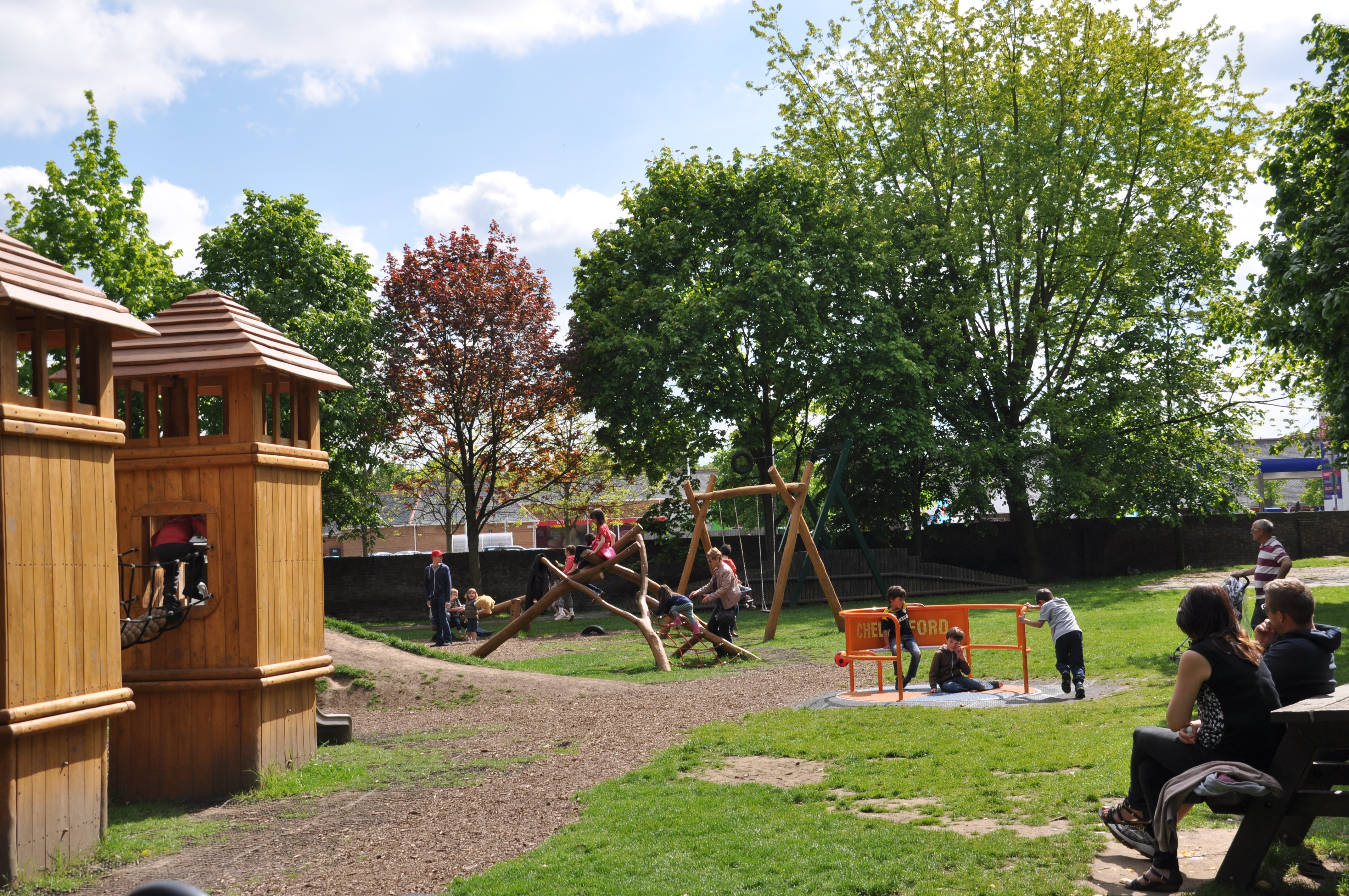 One of two playgrounds in Oaklands Park

If I was local I’m sure I’d revisit, but I don’t think I’d recommend a longer distance trip. I found the museum disjointed, with an underlying assumption Chelmsford history doesn’t require wider context – unfortunately, as a non-local I didn’t feel drawn in. The collection houses some gems – for example I loved the Grayson Perry work ‘Chelmsford Sissies’ and the Lynton Lamb paintings – but the portraits exhibition felt like a room full of mixed calibre paintings, with no bigger narrative. 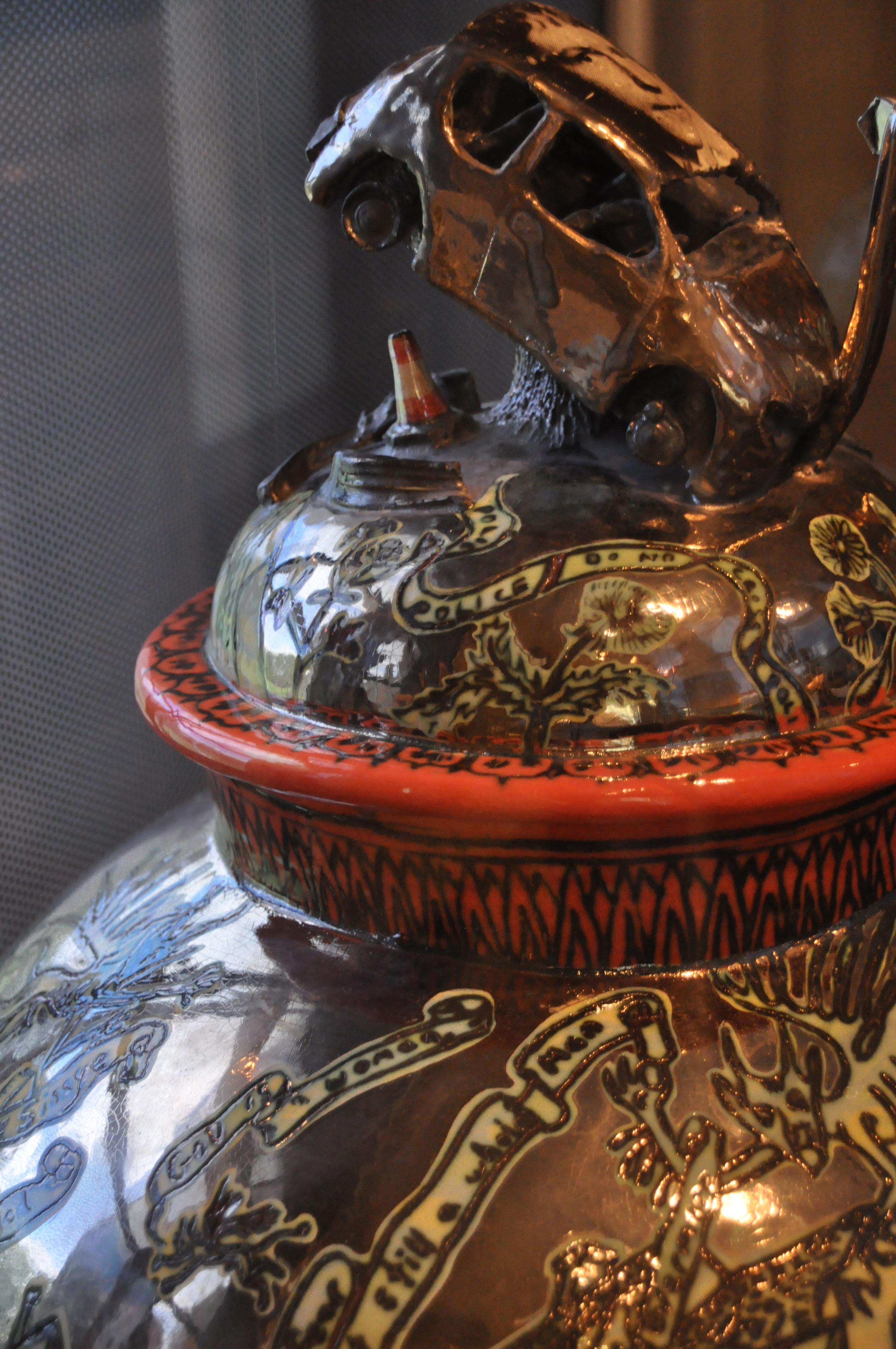 The quality of interactives varied e.g. there wasn’t anything in the dressing up box enticing enough to convince the toddler to wear and the mirrors were hidden behind the fixed outfits.

Nothing gets between the toddler and his reflection

Pulled in by the disco ball, my son dashed into the twentieth century social clubs room, but the touchable juke box didn’t work, and the displays didn’t get across the energy of the local music scene. Wouldn’t it be great if you could select a song and the screen taught you how to dance to it? That would be a fun activity for families, get across the excitement of social events, and pass on cultural traditions. 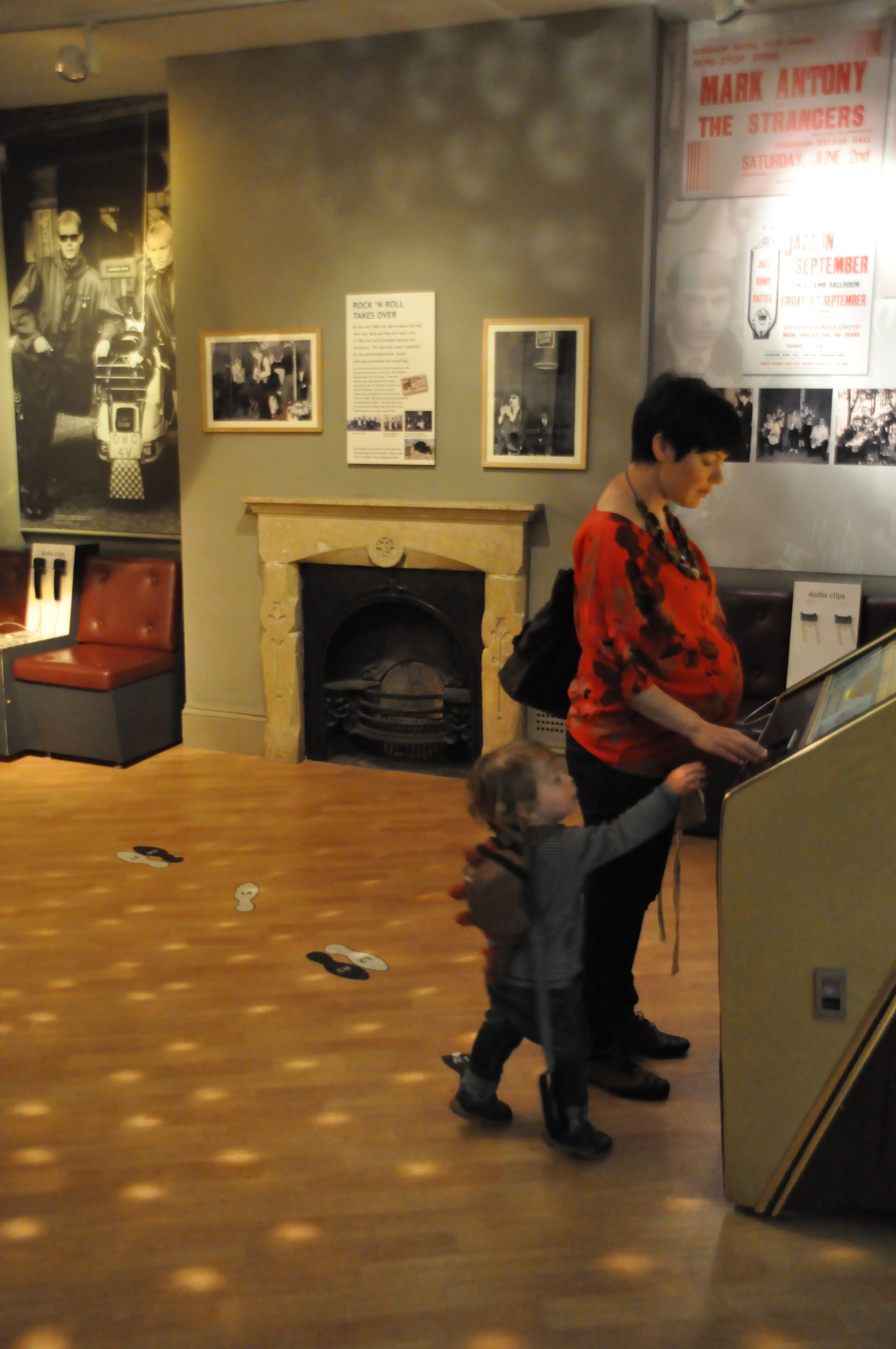 We WILL work this thing!

I’ve see lots of great reviews for Chelmsford Museum, on Facebook, tripadvisor and elsewhere. It’s wonderful to see what local support it has, particularly from families – so if you’ve been, let me know your thoughts below.
THE BARE BONES
Chelmsford Museum, Oaklands Park, Moulsham Street, Chelmsford, Essex CM2 9AQ
Current opening hours: (check website before setting out)
Mon-Thurs: 10am – 5pm
Friday (Half term and school holidays only): 10am – 5pm
Sat: 10am – 5pm
Sun: 1pm – 4pm
Website: http://www.chelmsford.gov.uk/museums
Cost: Free
Recommended length of visit: 1 hour or so
Buggy accessible?: Yes – level entrance. Lift to first floor, with small lift inside social history gallery to take you to rest of first floor. Space to park buggy to left of main entrance.
Baby changing: Yes, confusingly not signposted on the toilet doors. They are not in the disabled toilet (which does however have a specific nappy bin), but one each in the larger cubicles in the men’s (YAY!) and ladies’ toilets. The ladies was being used, so couldn’t check it. The mens had no strap, and the lights were on a motion sensor which was only operated by motion from outside the cubicle which may be a problem on duller days.
Breastfeeding friendly?:  I could use the vending machine room with its chairs and books to entertain the toddler. I’d just have to ignore the hum of the machines and its drabness.
Toddler time from gallery to toilets: From the hive (one of the furthest points) to the toilets I’d say about two to three minutes, including a flight of stairs. There are lower sinks for children to use in the ladies (my partner didn’t think about checking the gents for that!)
Nearest playground: Less than a couple of minutes to the two newly refurbished playgrounds.
Food: No cafe, but vending machines upstairs with space to sit. If the weather is good I’d recommend you pack a picnic, as there’s plenty of picnic benches in surrounding park. There’s an ice-cream van in the entrance, and a Costa Coffee in the Tesco up the road. We had a pleasant afternoon tea in The Kilns, about a 20 minute drive away.
Want to make more of a day of it?: Nearby is Hylands House and Estate, also council run, and the Essex Police Museum is in Chelmsford too.